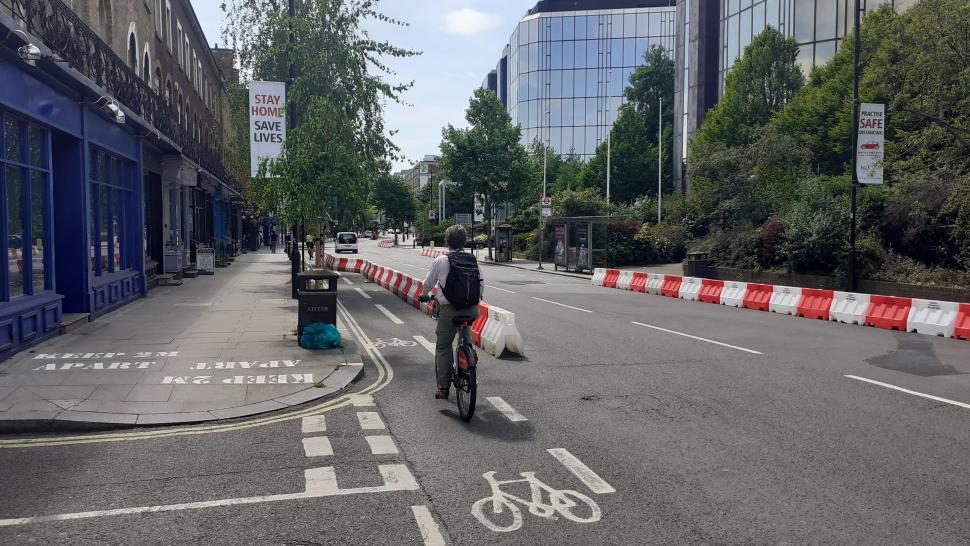 The leader of Walsall Council says he does not support pop-up cycle lanes because he believes that motor vehicles and bicycles cannot mix safely. Councillor Mike Bird also said that before considering introducing such lanes, the wider issue of road safety needed to be examined, but added that he believes “the challenge is insurmountable.”

The Conservative-run council leader’s comments appeared in an article published by the Express & Star on 25 May under the headline, Could the Black Country become a cycling Yamsterdam?

In the article, the newspaper canvassed the views of civic leaders in the area about the government’s £250 million funding for emergency cycling and walking infrastructure, which was welcomed by the leader of Wolverhampton Council, Ian Brookfield.

Describing the huge increase in cycling during lockdown as “phenomenal,” he added: “We don't just want pop-up lanes – we want permanent lanes thank you very much.”

Council leaders in Dudley and Sandwell were also receptive to the funding and spoke of their own plans, including improving towpaths on the extensive canal network in the area.

But over in Walsall, Councillor Bird was less than enthusiastic, insisting that temporary cycle lanes would make the roads more dangerous, even though revised statutory guidance published by the Department for Transport (DfT) last month said that “facilities should be segregated as far as possible.”

The guidance also underlined that “lanes indicated by road markings only are very unlikely to be sufficient to deliver the level of change needed, especially in the longer term.”

The council leader, perhaps unfamiliar with that guidance and assuming that the issue was about painted cycle lanes, said: “I find at this point in time now, because there are less cars on the road, cyclists are taking ownership of the road,” he said.

“With the pop-up lanes, cars would be mingling with riders on a regular basis.

“We are told we need to give cyclists more distance when overtaking.

“Suddenly, at this point, I see cyclists riding two, three or four abreast in the road. It makes it extra dangerous for cars to pass.

“If you look at Amsterdam, the use of bikes there is long established,” he continued. “Therefore in many places where cyclists are permitted, cars aren't allowed. There are car-free zones.

“I do believe there has been an upsurge in cycling, Councillor Bird added. “But before I say yes to pop-up lanes, we have to look at road safety. To me I think the challenge is insurmountable.”

Responding to those comments, Steve Price, director of community interest company Walsall Bike Project, told the newspaper: "We were very disappointed by Councillor Bird's negativity to allowing more cycle provision in Walsall, even though central government funding is available to make it safe for all road users.

“It is a popular form of transport but kept from enjoying wider take-up by the allowed dominance of cars and lack of proper provision for cycling.

“Anyone travelling along the Broadway recently, for example, would have seen lots of cyclists on the paths due to being too scared to cycle on the road,” he said.

“Most drivers are exceeding the speed limit and some do not observe correct passing.

“A bike lane on the highway, which is plenty wide enough to support it, would be very helpful and encourage safer, off the path cycling, for shoppers and commuters to Walsall town centre.”

Duncan Dollimore, head of campaigns at Cycling UK, highlighting the DfT’s revised statutory guidance, told road.cc: “Sadly, some local authority leaders don’t appear to have realised this makes it crystal clear that they are expected to make significant changes to their road layouts to give more space to cyclists and pedestrians, and take measures to reallocate road space to people walking and cycling.

“The letters sent [by the DfT] to local authorities last week outlining their funding allocations from the emergency active travel fund also stated unequivocally that:

The first tranche of monies was being released as soon as possible so that work can begin at pace on closing roads to through traffic, installing segregated cycle lanes and widening pavements.

To receive any money, local authorities need to show that they have swift and meaningful plans to reallocate road space to cyclists and pedestrians, including on strategic corridors.

Anything that does not meaningfully alter the status quo on the road will not be funded.

“It’s really difficult to square Mr Bird’s comments with the statutory guidance and the conditions of the funding allocations, so Cycling UK will write to Walsall Council to highlight the requirements of both.

He added: “If any readers live in Walsall, they should feel free to use our online action to do the same.”

While many local authorities across the country have already started rolling out pop-up infrastructure in response to the government’s appeal to help people get to work safely while avoiding public transport, Councillor Bird is not alone in his apparent lack of enthusiasm for cycling.

Last month we reported how the leader of Lancashire County Council had sent blank emails in response to ones sent to him by local residents as part of Cycling UK’s online action, describing the messages as “childish antics.”