Dan Alexander is back for another day in the live blog saddle, bringing you all the important, strange and hopefully entertaining news from around the cycling world 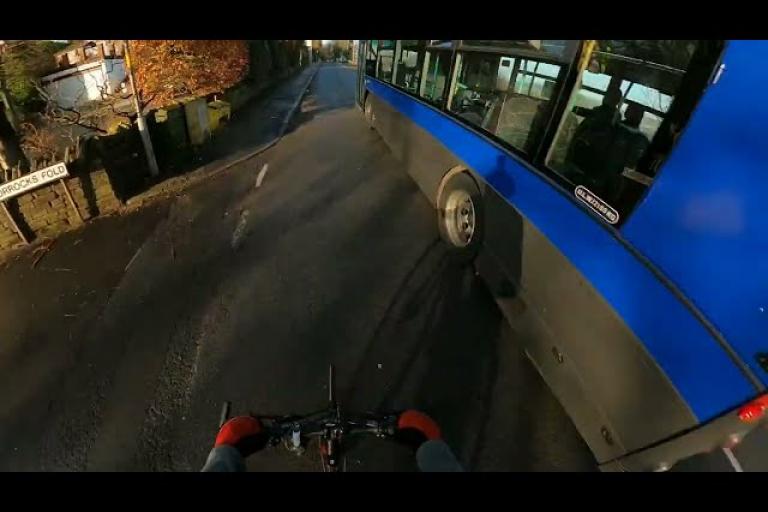 Our regular series featuring close passes from around the country - today it's Greater Manchester
39
20 January 2022, 17:34
Could the Vatican Cycling team make the 2024 Olympics?

There's a new team on the block. The Vatican Cycling team was accepted as a member of the UCI in the autumn, with president David Lappartient travelling to Rome to give Cardinal Gianfranco Ravasi a cycling jersey for Pope Francis. 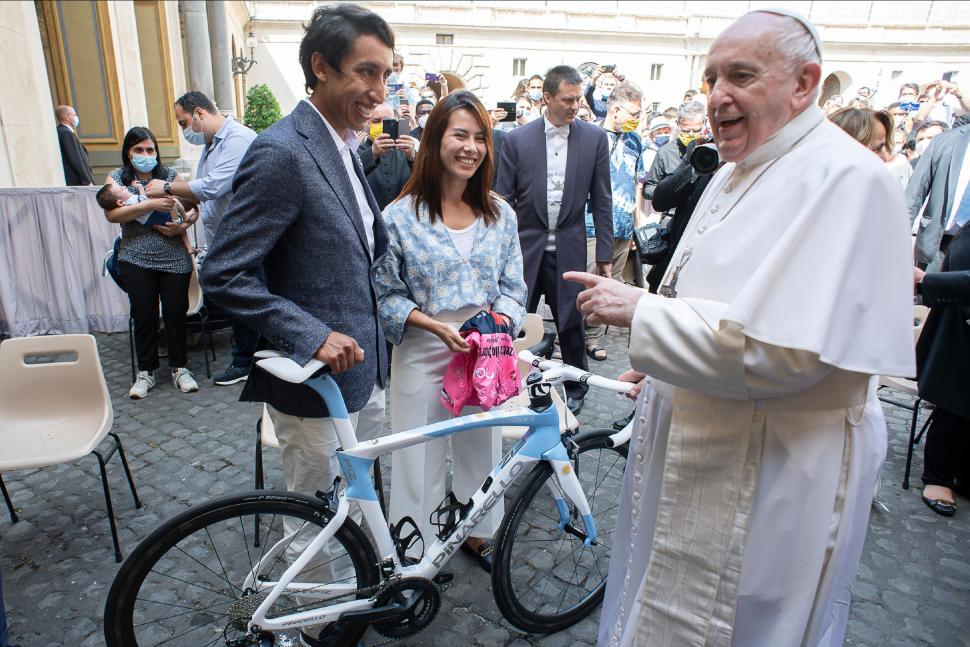 Now, we're pretty sure Pope Francis himself won't be donning the Lycra for a bid at road race glory...so what is the team's goal?

The dream of the Vatican team is apparently to qualify for the 2024 Olympics in Paris, but for now team officials say team spirit and spreading Pope Francis' love of cycling will be enough.

NCR reports Ravasi told attendees that although Leonardo da Vinci did not invent the bicycle, his 16th-century sketches helped intuit what would become today's bikes.

In June, Egan Bernal presented Pope Francis with a Pinarello Dogma F12 and Maglia Rosa from his Giro d'Italia win. 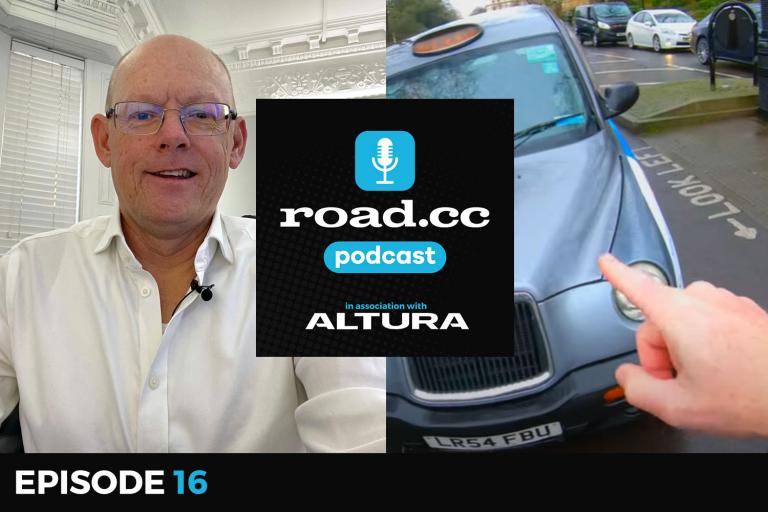 "Tired of road crime": CyclingMikey on episode 16 of the road.cc Podcast, plus how to make the most of your lunchbreak

The now-famous camera cyclist tells us about how and why he is making a difference to road safety. We also talk making the most of your lunchbreak, and Mike explains why you need a £165 bar bag…
0
20 January 2022, 16:08
Enough to get you home?

Apparently the bonk doesn't exist when you're a pro rider... 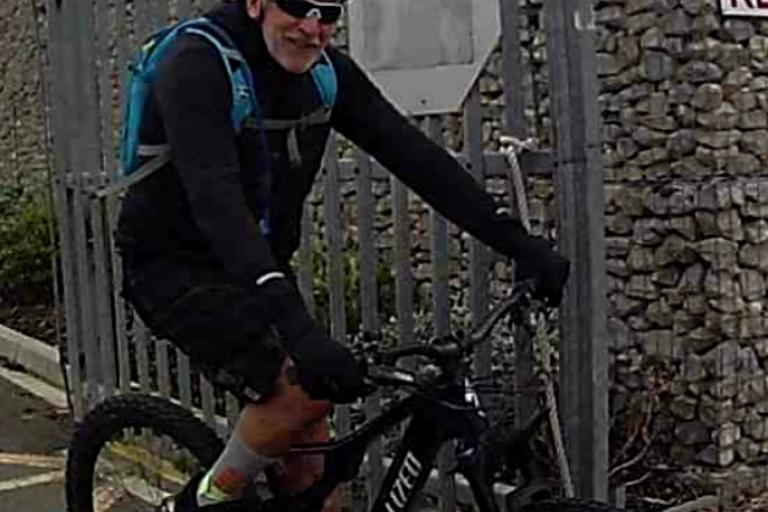 Cyclist accused of punching delivery driver who “cut him up” 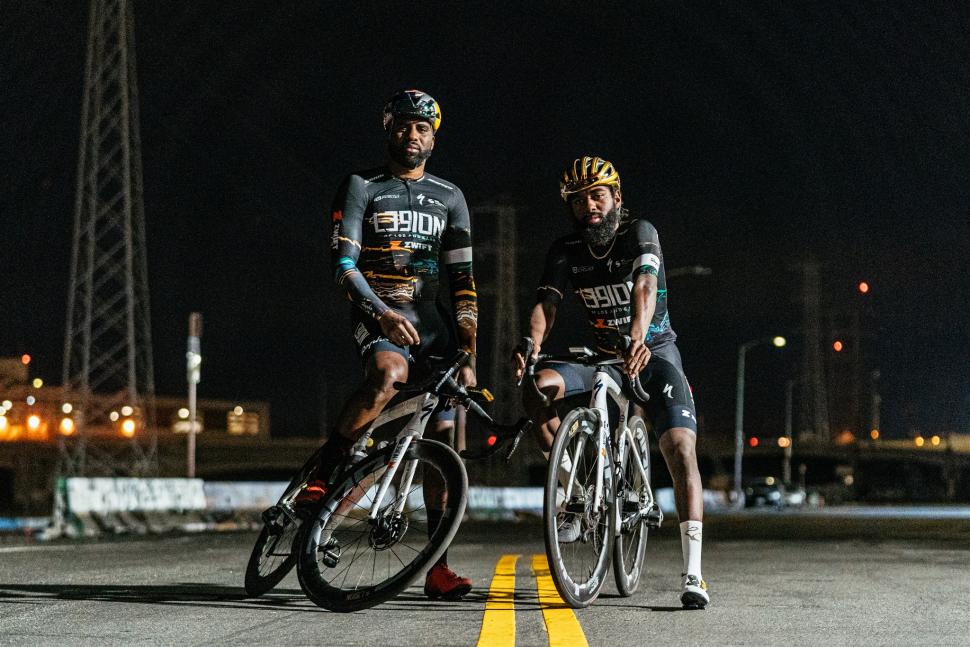 L39ION of Los Angeles has revealed its 2022 kit that’s inspired by night racing and designed in collaboration with Rapha. It’s stunning, isn’t it?

Warped traces of light and a fast paced graphic style fill the jersey. The design is intended to symbolise “Legion’s attitude towards warping people’s perceptions of them and the sport”, all in a colour palette that mirrors their natural habitat: nocturnal crit races. 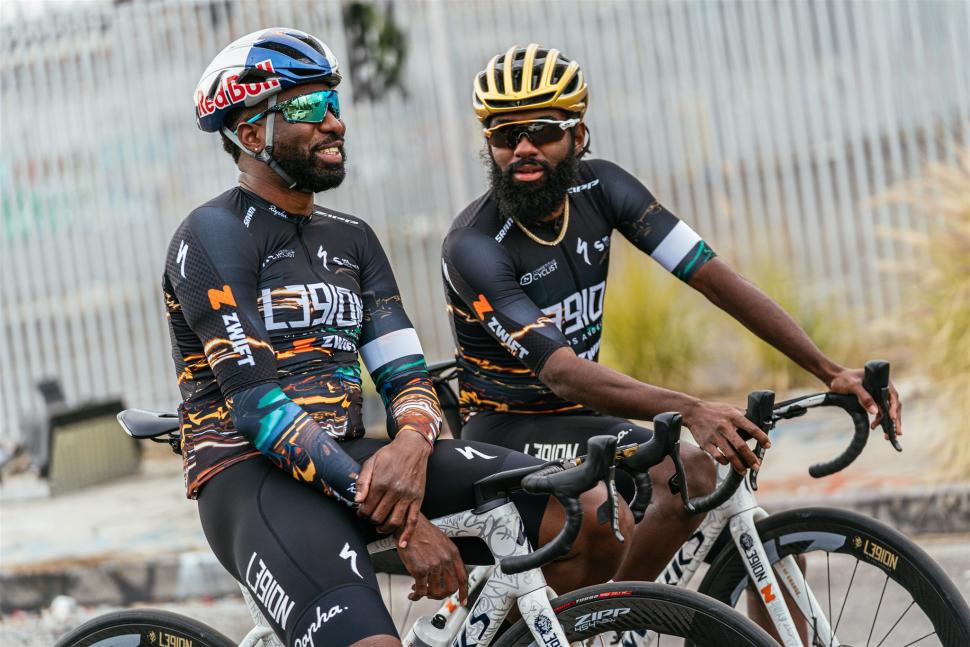 The team kit will be available to buy on rapha.cc, with a portion of the profits being reinvested back into the team to help fund their development.

Speaking to El País, Ayuso's coach said the Spaniard has lofty ambitions to be as good, if not better, than his esteemed colleague. "He thinks that Tadej is not his ceiling - but that his ceiling is to be better than Tadej," Iñigo San Millán said.

"I put both of them together at the same time [on the climb] so that they would get itchy, so that Tadej could see that he couldn’t relax because Ayuso is so strong. And also so that Ayuso can see that he is getting closer to Tadej.

"On the Coll de Rates, the intensity was similar to that of a Tour stage. If Ayuso does this in a race which Tadej isn’t…He dreams big. Why is it going to be possible to beat Tadej?" A Glasgow commuter (hopefully not behind the wheel at the time) snapped this shot of a cyclist riding along the ten-lane M8 road bridge on Tuesday morning. Glasgow Live speculated they must have crossed the Clyde by taking the slip road up from Waterloo Street in the city centre or Newton Street after being spotted heading towards the Tradeston exit.

The bridge is regarded as one of Europe's busiest, seeing more than 150,000 vehicles a day. It's not the first time a rider has taken the wrong turn. In 2017, a cyclist was "fearful and in tears" after ending up on the bridge. 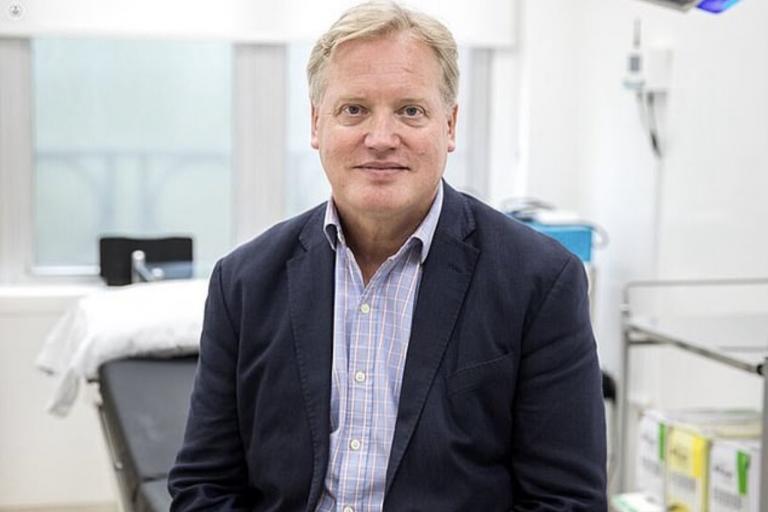 TV surgeon and cyclist killed after collision with motorist in Essex

Niall Kirkpatrick, one of the world’s leading plastic surgeons, was known for his appearances on Channel 5’s Botched Up Bodies
4
20 January 2022, 15:01
Why pros flock to baaaalmy southern Europe for winter training...

“Guys, we have to hurry up a little bit” @jakob_fuglsang’s TT victory was stolen today 🤣 pic.twitter.com/uvKH1uuMVl

20 January 2022, 12:51
Chris Froome suffers another setback — out until mid-March at the earliest 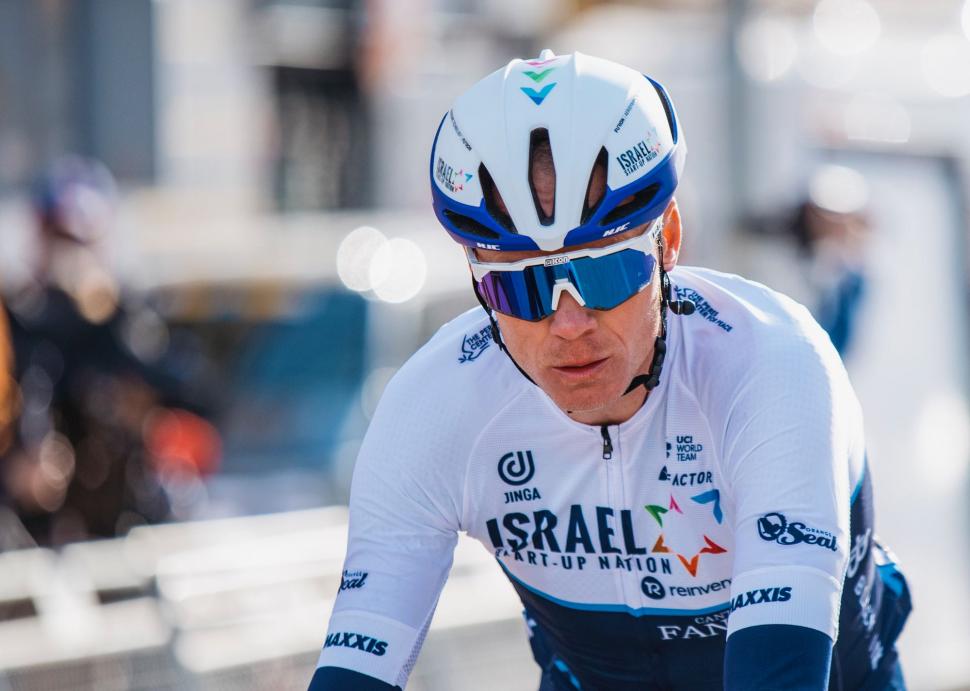 Chris Froome will not race until mid-March and, "It is difficult to estimate what we can expect [...] but we are trying to get the most out of it." That's the verdict of Team Israel - Premier Tech sporting manager Rik Verbrugghe who today told Het Nieuwsblad that the 36-year-old is still suffering from a knee injury which had hampered his winter preparation.

We're so excited about the forthcoming changes to The Highway Code that we did this! (thread!) pic.twitter.com/sLzkKv8LXX

Heard about this a couple of months ago - despite noises to the contrary for a while last year, there WILL be a third season of the Netflix documentary on the Movistar team, El Día Menos Pensado. https://t.co/QbiYoZkDXM People in Czech capital Prague will have free access to short-term bike-sharing after a pilot project was made permanent. The Lítačka public transport pass will now give users up to 15 minutes free use of hire bikes, four times a day.

Canadian Cycling Magazine reports the scheme was initially implemented to alleviate the city's congestion by offering an alternative to bus or car journeys.

Having begun in October the three-month pilot has now been made permanent. The stats from the pilot showed the majority of journeys lasted around five minutes, most likely as people commuted or popped to the shops. 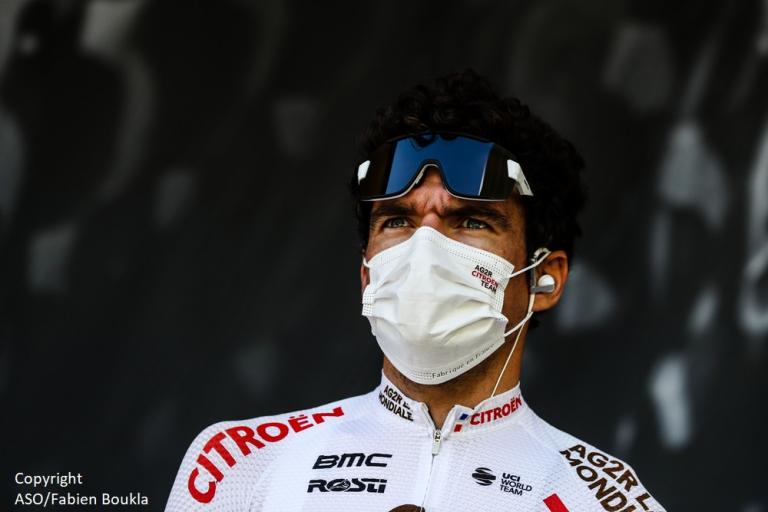 The AG2R Citroën rider blamed the vaccinations for his poor form in the second half of 2021
7
20 January 2022, 10:42
No action for dangerous overtake...but cyclist cautioned for swearing

Warning strong language. Swearing while you fear that you are about to be killed by a driver using a vehicle as a weapon against you is a public order offence according to the local Inspector. Long thread @SafeCyclingEire @IrishCycle @righttobikeit @CitizenW0lf @ciarancannon pic.twitter.com/49nPBzuNDy

Here's a lesson you should apparently consider: don't swear if you're put in danger on the roads...

@CyclingForMind found out the hard way after reporting this driver for a dangerous overtake ahead of a blind bend, only to receive a caution and see no action against the motorist. The manoeuvre came moments before this later footage and "out of fright at being overtaken so close to a blind bend I ended up swearing," the rider explained.

"I could see the look of anger on the driver's face as he overtook. Five minutes later I passed the same driver in a car park. He appeared to be checking his phone. I shook my head at the fact he had time to stop to check his phone but not to wait until it was safe to overtake."

That's where we join the footage...with the driver chasing after to have a few words...

"I was inches away from being forced onto the gravel," they continued. "If I crashed I could have hit the stone wall to my left or gone underneath the van."

In the following 'debate', "he came out with such gems as 'you're swearing in front of my fucking young lad'.

"At no point did I swear at the driver while he was out of the van or make threats against him. Not proud of myself for the language I used in front of the kid but I did not expect a kid to be in a work van when he first overtook.

"I think most people would react the same. When you fear that you are about to be killed you don't have time to consider your words. It was a primal reaction to the most primal fear."

Despite repeated requests for updates and an appeal the original decision stood. "What message are the Garda sending out here? If a driver causes you such fear that you swear don’t report them or you will end up in court."

There's something very therapeutic about bike build vids. It's like ASMR for cyclists...

Thankfully Richard Carapaz avoided smashing up his new Pinarello, but only just. I say Carapaz almost smashed his bike...an impatient driver almost smashed his gold Dogma is definitely more accurate...check out Near Miss of the Day 700, Ineos Grenadiers training camp edition if you missed that one... 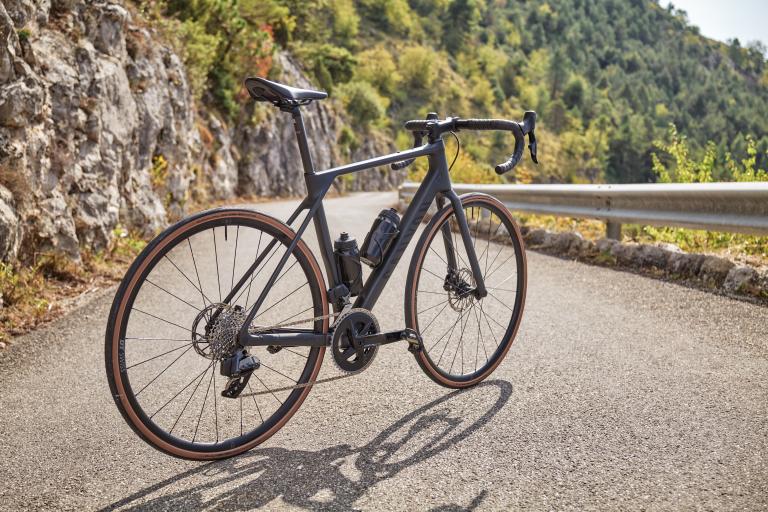 Halfords e-bikes are available on a first-come, first-served basis
0
20 January 2022, 10:22
Mamnick continues to fight all comers over edgy gun ad 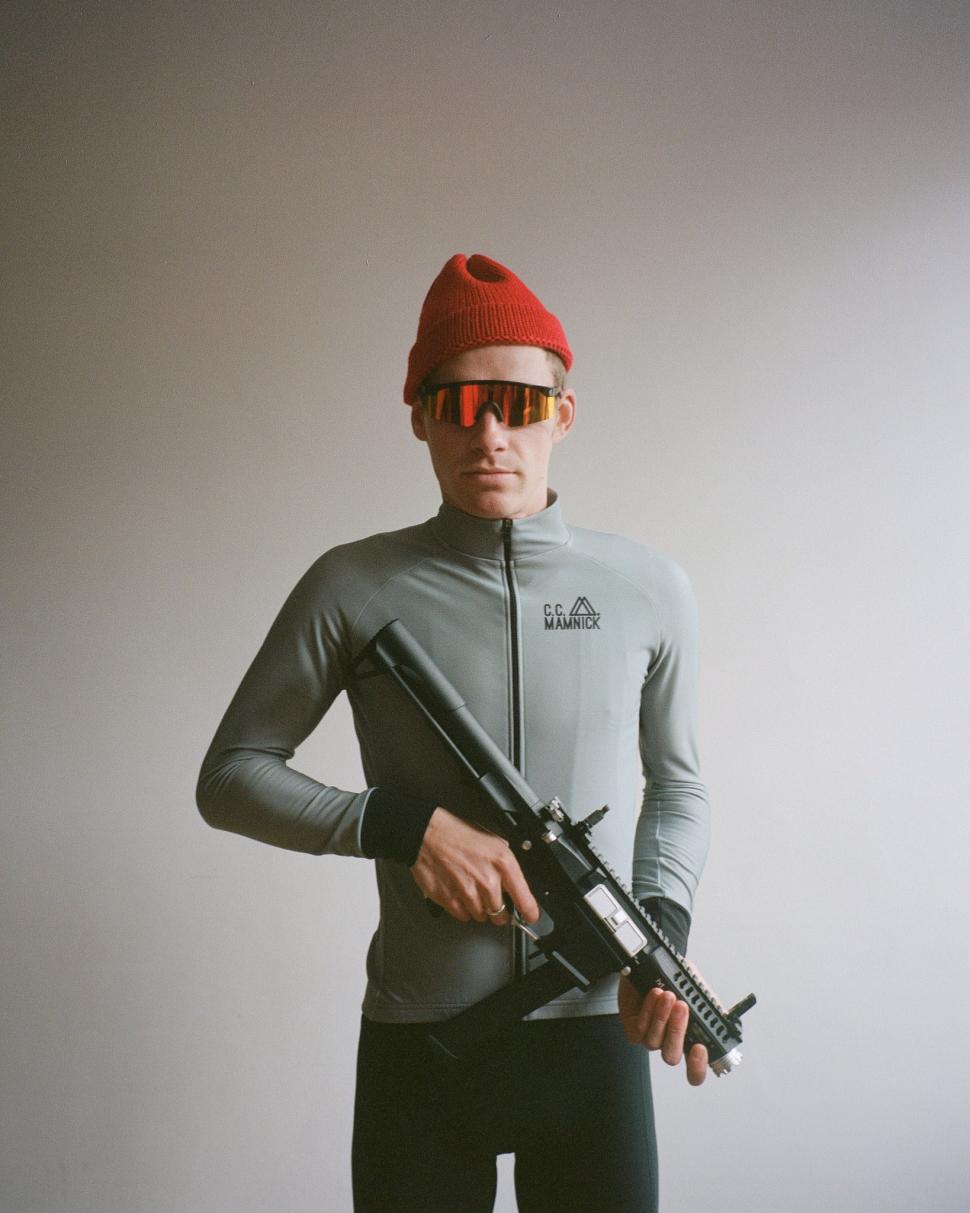 How could you forget...The brand got a fair bit of heat for it when it first dropped, and then got the official telling off from the Advertising Standards Authority, informing Mamnick’s owner Thom Barnett that the ad breached UK advertising code.

However, the company isn't ready to go down easily, and is still popping back at the critics...

You might have heard of Bakers Eddy if you're big into your music...the New Zealand-based band has supported acts like Highly Suspect and The Rubens, and has a new track out called...*drumroll please*...Hi-Vis Baby.

And yes, it's about life as a cyclist. "I could go forever, distance is nothing. I think i feel better because my heart is pumping. If you're in a four-wheel drive you can fuck off because i am not your problem 'cause I am on a journey don't concern you." Catchy.

There are hints of their punk-inspired past, and the band describes its sound as "loud, fast and dirty" which incidently is how I describe my bike (although more often than not loud, slow and dirty would be more accurate).

So where would this chart in our 2016 People's Choice: your favourite songs about bikes and cycling?

Tour de France by Kraftwerk came out on top in that, Bicycle Race by Queen second and Half Man Half Biscuit's See that my bike's kept clean was in third. Any danger of Hi-Vis Baby cracking the podium?