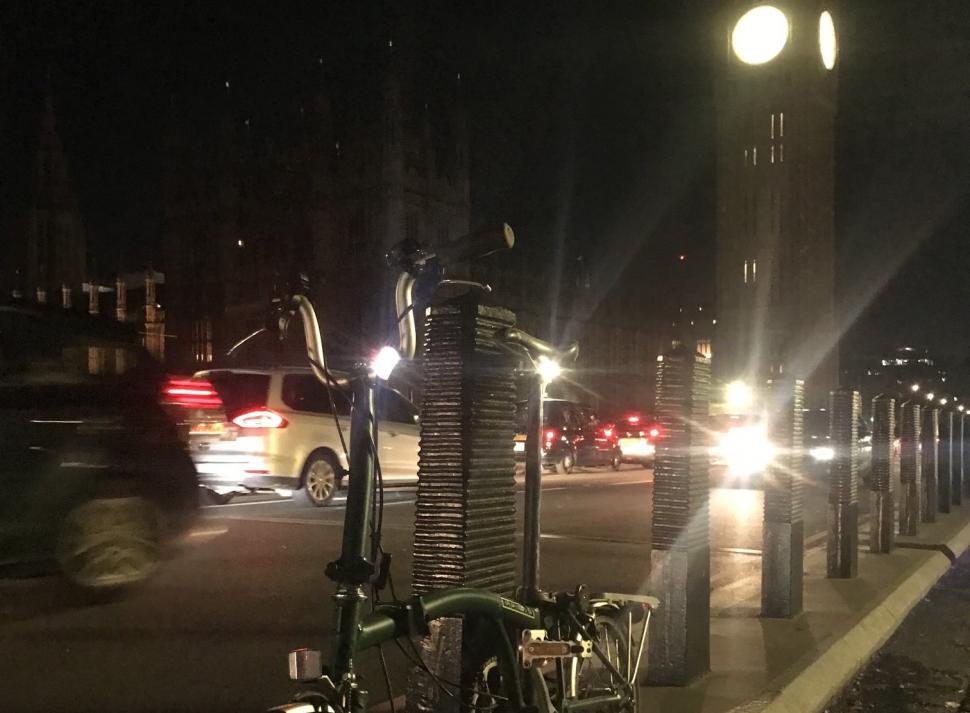 UPDATE: Statement comes after reporter was turned away from Parliament green transport event... because Brompton bike did not fit through security check
by Dan Alexander

On Monday 21st November officials from Parliament confirmed to road.cc that folding bikes are allowed, providing they can fit through security screening.

In a statement provided to road.cc, Parliament explained:

Folding bikes are allowed on the Estate providing they can fit through security screening equipment. Luggage larger than 550 mm x 360 mm is not allowed, except at the main visitor entrance, Cromwell Green, where up to 600 mm x 400 mm luggage can be accommodated. Non-folding bicycles are not allowed. The nearest bike racks are outside 7 Millbank.

As per Brompton's website, one of its folded bikes is 585mm tall, 565mm long, with a width of 270mm, suggesting meeting the stated dimensions could be problematic away from the Cromwell Green entrance.

When the editor of shipping industry publication Lloyd's List, whose day job involves reporting the decarbonisation of global maritime trade, arrived at the Houses of Parliament on Thursday evening for a launch event for a new tidal-powered port he had little worry his own green transport — a Brompton folding bicycle — would be a problem.

Having cycled around London attending events on his trusty folder for over a decade Richard Meade certainly did not expect his mode of transport to be deemed a "security risk" and his access to Parliament refused, not least when trying to attend a green transport event.

"The fact that I was attending a green transport event and being barred for turning up on green transport seems bizarre," Richard told road.cc. "The police did not seem moved by my environmental argument!"

I was supposed to be covering a green transport event at the House of Commons this evening. Sadly I have been turned away on account of having tuned up on my fold up bike…. pic.twitter.com/LWZENBiMOQ

Richard's invitation to the launch event for the Centre Port Project by MP for Boston and Skegness Matt Warman clearly did not sway security to allow the folder either.

Since telling his story on social media, several have replied — including road.cc contributor Simon MacMichael — reporting themselves or others being able to take folding bicycles into the Houses of Parliament without issue.

"I've been cycling around London attending events on my Brompton for over a decade and this is the first time I've been refused access on account of it being a security risk," Richard explained.

Not cool indeed @BromptonBicycle - the armed officer who deemed my green Brompton a security hazard did not accept the environmental argument and said you should manufacture bikes that fit through his scanner.

"The police officer insisted that it was not allowed through the scanner. As others have pointed out, that's not entirely true given that it seems many Bromptons have been allowed through before mine. Presumably wheelchairs are accommodated despite being bigger than my bike."

According to the security information section of the Parliament website: "Non-folding bicycles are not allowed. The nearest bike racks are outside 7 Millbank."

road.cc has contacted the Houses of Parliament for confirmation that folding bicycles should be able to pass security.