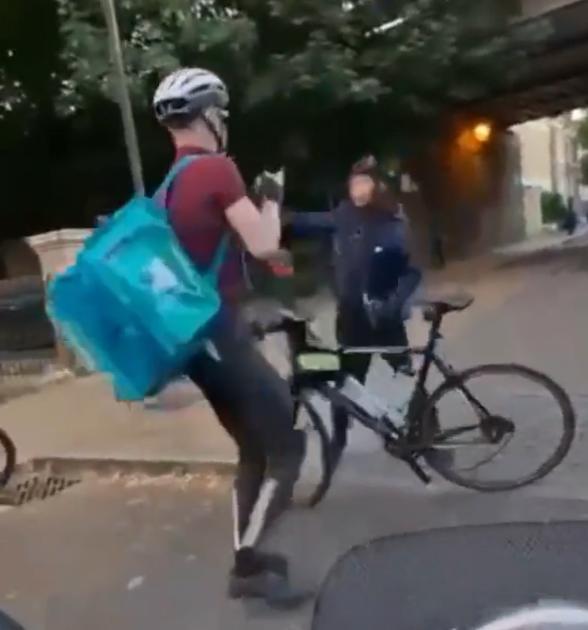 The 24-year-old says the alleged assault was the third cycling-related incident he has reported to the police in recent months, following a collision with a driver and a bike theft
by Ryan Mallon

A Deliveroo employee was attacked by a teenager wielding a knife after the pair collided with each other while cycling on a London bike lane.

24-year-old delivery cyclist Ludovic Mihalca told the Mirror that he was picking up an order in Southwark in July when three youths who were also riding bikes “jumped into the cycle lane from the pavement”, causing a collision.

In a video that was uploaded on the day of the incident to the London and UK Street News (CrimeLdn) Twitter account, Mihalca can be seen confronting one of the teenagers and aiming a kick at his bike.

The 24-year-old courier can also be heard shouting, “You’ll pay for my f***ing bike”.

The teenager then dismounts from his bike, before brandishing what appears to be a knife and lunging towards Mihalca, who did not suffer any injuries during the row.

Met Police officers were called to the incident, which took place on 3 July, at around 9pm. No arrests were made and officers confirmed to the Mirror that enquiries are ongoing.

Mihalca, who said he was unhurt but left “shaken up” by the incident, described the attack as “disappointing”.

“[The teenagers] gave me five metres to brake while I was going at around 20mph. I couldn’t avoid them and just pulled my brakes as hard as I could before crashing into one,” he said.

“I then asked ‘what are you doing, why aren’t you looking behind you?’. It could have been a car.

“They then started punching me and were very aggressive. I tried to call the police but they just hung up. I didn’t even have time to get off my bike because I was getting hit in the face.

“I was saying ‘stay here until the police come’ and one started kicking my bike with his leg. Two of them left and I then kicked his bike back.

“He then tried to stab me. I didn’t even see the knife as I was just thinking he’s trying to punch me. I saw it after he tried to hit me with it. I didn’t even expect a knife as he’s just a kid.”

> Cyclist injured by axe-wielding youths during attack along popular trail

The delivery cyclist says the incident has left him “scared” for his safety, and added that in the months since the altercation he has been the victim of a bike theft and involved in a collision with a driver.

“I’m really scared because later that night one of them showed up around the same area and started asking me what the police were going to do. I was busy with an order at the time,” Mihalca said.

“I just want to be safe and for someone to pay for the damages to my bike. The wheel is spinning too much and the brakes don’t work like before.

“I also lost my headphones when they punched me. I put them in to try and call the police but they took them out of my ear.

“Recently I was involved in a car accident where a driver bumped into me from the side, but the police couldn’t investigate as there wasn’t enough evidence. Then two weeks ago I had another bike which got stolen. It’s really disappointing.”

At the time of the incident, the Met had said that it was alerted to reports of an assault following a verbal altercation, but that the teenager had fled the scene by the time officers arrived.

A Deliveroo spokesperson told the Mirror: “We’re really concerned by this video and are reaching out to try and identify the rider involved and make sure they’re OK.

“Keeping riders safe is a priority for Deliveroo and our dedicated rider team is available to offer advice, support and to liaise with the relevant authorities if the rider chooses to report this incident.”

In June, less than a month before the alleged assault in Southwark, a cyclist was injured during a similar attack by armed teenagers along a popular trail in Weymouth.

The incident happened on the popular Rodwell Trail in Dorset between 21:50 and 22:05 BST on Saturday 4 June, and saw the victim, a cyclist in his 40s, suffer injuries to his head, arm and leg.

While he was cycling behind Weymouth Outdoor Centre a group of four teenagers — one carrying an axe and another a knife — attacked the rider and took his baseball cap and a backpack containing a bike lock, in what local police described at the time as “an unprovoked and nasty” assault.