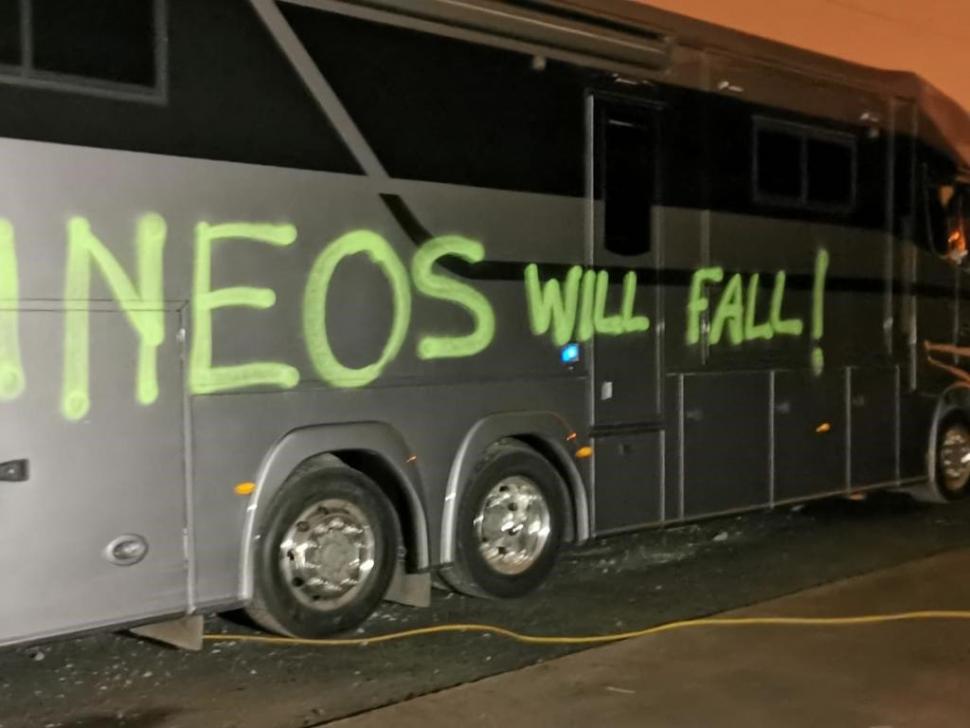 Ineos Will Fall (via Annick De Ridder on Twitter)

Several vehicles belonging to Ineos Grenadiers have been targeted by environmental campaigners at the UCI WorldTour team’s service course base in Belgium.

Het Nieuwsblad reports that six vehicles were damaged in the incident on Sunday in Deinze, East Flanders, either being covered in graffiti or wrapped in tinfoil.

Pictures shared on Twitter by New Flanders Alliance party MP Annick De Ridder showed vehicles daubed with slogans including, on a team bus, “Ineos will fall” – the name of an environmental group campaigning against a major plant named Project One planned in the Port of Antwerp by the petrochemicals giant that sponsors the team.

De Ridder said in her tweet: “This has nothing to do with democratic civilian protest any more, but is descending into pure eco-terrorism,” and called for an end to such actions.

The province’s public prosecutor has confirmed that four adult suspects have been arrested and that tinfoil and cans of spray paint were found at the scene, as well as a flag also bearing the words “Ineos will fall.”

According to Het Nieuwsblad, it is not clear what will happen to the suspects.

The UK’s largest privately-owned company, controlled by Sir Jim Ratcliffe, took over sponsorship of the team from the broadcaster Sky in May last year.

The business – last year named Scotland’s biggest polluter – has been accused of using its sponsorship of cycling and sailing, where it is backing Sir Ben Ainslie’s Americas Cup challenge, as a form of ‘greenwashing’, something Ratcliffe has denied.

In the team’s first race in its new colours at last year’s Tour de Yorkshire, it was targeted by anti-fracking campaigners, many wearing masks with Ratcliffe’s face on them, who called among other things for an end to sports sponsorship by companies involved in fossil fuels.

We have approached Ineos Grenadiers for a comment on yesterday’s incident in Belgium.