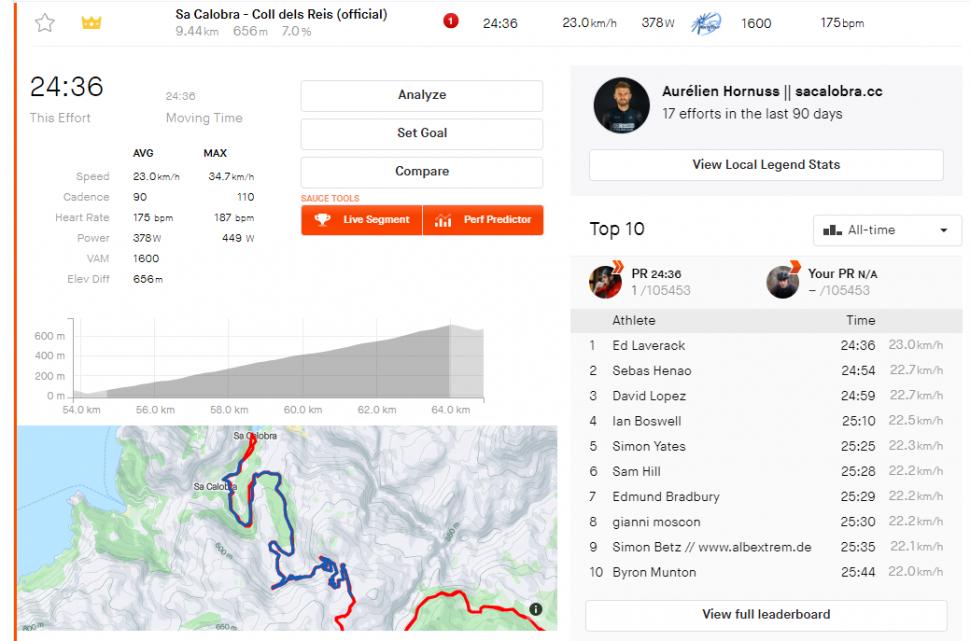 Hill climb specialist Ed Laverack is the proud new owner of one of the most competitive Strava segments in the world — Sa Calobra.

The 9.4km climb is an iconic bucket list challenge for cyclists from across the world, and a regular winter testing ground for the WorldTour pros.

A quick peek at the Strava leaderboard will tell you as much. Four of the top ten were riding for Team Sky (now Ineos Grenadiers) when they set their best times, while 2018 Vuelta a España champion Simon Yates has the fifth-fastest time. I’m a broken man but I set out to attempt something and by throwing caution to the wind today it payed off🙏🏼
6.3wkg for 24 odd minutes was “enough”☠️
Believe. Achieve. EDMODE. pic.twitter.com/a3KoSOZZ2o

His power meter data shows Laverack averaged 378w, with an average heart rate of 175bpm as he shredded the climb's famous twists and turns.

The segment has been attempted more than 180,000 times by 96,011 people (at the time of writing) and is one of the most popular climbs in Mallorca/ Spain/ Europe/ the world...

Sharing the KOM-breaking effort, Ed wrote: "Waw. I can't believe it all came together. That was worth the early alarm. No traffic, swirling wind but a headwind for the final bend to the top. "Started to lose focus in the final 2km. This ride today was the most nervous I'd been in a long time, and I was just trying to calm myself down for the first half.

"Thank you to those that have followed along for this, those that backed me and the people on the road today that asked how I’d done as they were heading out to tackle their own rides. Set and smash your goals guys, but have some fun along the way."

Now go give that man some kudos!