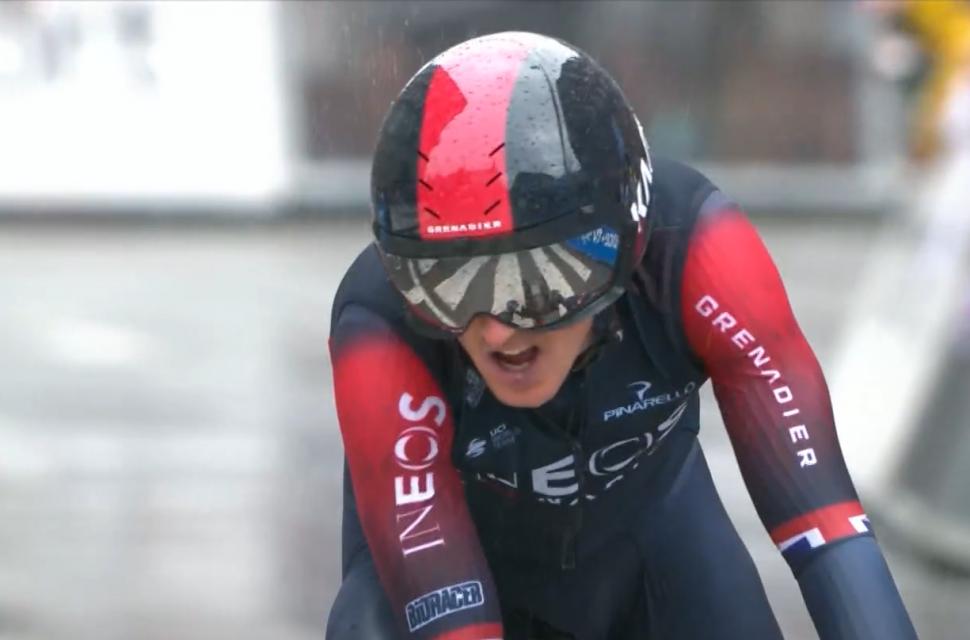 "On fire" Geraint Thomas "best I've ever seen him", according to Rod Ellingworth

"He has worked really hard, his weight is bang on. He's really on fire"...
by Dan Alexander

Rod Ellingworth, the Ineos Grenadiers' Director of Racing who was part of the staff team which oversaw Geraint Thomas' 2018 Tour de France win, has fired a warning shot to the Welshman's GC rivals by making the bold claim that Thomas is "on fire" and "the best I've ever seen him".

The comments came while speaking to Cyclingnews at the end of the Tour de France's opening weekend in Denmark.

Thomas sits 12th on GC, 18 seconds behind Tadej Pogačar after losing time in the opening TT having forgotten to remove his thermal gilet and, as the rider said himself, been "cornering like my wife — she hasn't ridden a bike in 12 years".

However, Ellingworth remains confident Thomas has the form to compete with the best as "his weight is bang on" and "he's on fire".

"To be honest with you, I think he's as good as I've ever seen him. It's really exciting to see," Ellingworth said. "G has done really well to bring himself up to this level. He has worked really hard, his weight is bang on. He's really on fire.

"When I say the best I've ever seen him, what I mean is the entirety, just how he is, his attitude, how he is with his teammates. He's ambitious – as ambitious as he was when he was a young kid, which is pretty impressive.

"I've really enjoyed working with G again this year. He's been brilliant with the young lads. He's said to me 'I've really enjoyed it as well'. My gut feeling is I don't think he enjoyed racing much last year. You just have one of them sometimes, it all feels a bit sticky, but I think he's really enjoying his bike racing again."

Ellingworth insisted Pogačar remains favourite, but as seen in the final of yesterday's stage – "everyone can crash".

"I think Pogačar is the out and out favourite but everyone can be beaten. Everyone can crash too. We don't want that, we want a fair race, but we've got a group that is up for the challenge and that wants to race. We're going to take the race to our rivals.

"We've got our plans, we've got our days where we feel we're strong and can make a difference."

Thomas was left frustrated by his opening day time trial performance and admitted to riding too conservatively in the first half. To make matters worse, the 36-year-old, a mechanic and team soigneur all failed to notice him still wearing a thermal gilet on the start ramp, a garment he wore for the entire 13km.

Despite the careful cornering and gilet mishap, Thomas said his legs felt really good and is confident he could have been "right up there".

"Everyone was saying take it easy," he said. "Don't lose it all today, but to be honest I wasn't even bothered about GC today I just wanted to do a good ride. It just got in my head and I rode so slow around these corners. It was so bad.

"I was cornering like my wife — she hasn't ridden a bike in 12 years. That was the worst first half of a time trial I've ever done.

"I was 18 seconds down at the first time check and I was like 'fuck this' and just took the pin out and raced it as I normally would. I was still cautious but just flowed a bit better and put the power down on the straights. The legs were really good which makes it worse because I could have been right up there."

The Tour de France returns tomorrow after today's rest day with a lumpy stage finishing in Calais, before the much-anticipated Paris-Roubaix stage on Wednesday.

On paper, the cobbled stage should suit Thomas the most out of the GC favourites, having finished seventh at the full race in 2014 during his previous life as a classics specialist.