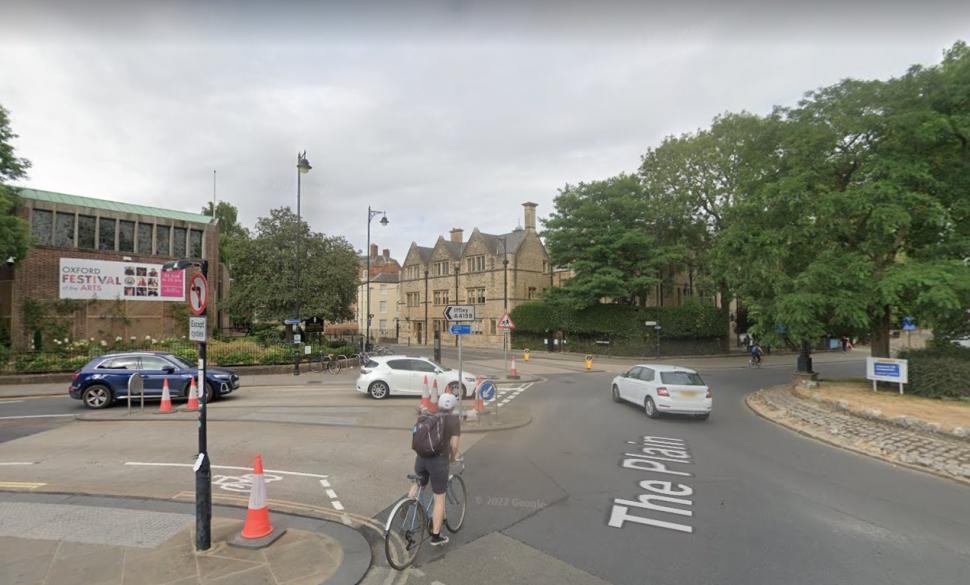 Improvements to notorious roundabout will benefit both cyclists and motorists, campaigners say

Work on The Plain roundabout in Oxford, where cyclist Dr Ling Felce was killed by a lorry driver in March, is scheduled to be completed this week
by Ryan Mallon

Cycling campaigners in Oxford have said that safety improvements currently being carried out on one of the city’s busiest and most notoriously dangerous junctions will benefit all road users.

The long-awaited work on The Plain roundabout, where University of Oxford researcher Dr Ling Felce was killed when she was struck by a lorry driver in March, began on Monday and is set to be completed by the end of this week.

Used by 12,000 bike riders each day, Oxfordshire County Council says that the roundabout is the busiest in the country in terms of flow of cyclists, and one of the most used throughout the UK. It has long been criticised by cycling campaigners for its intimidating layout and lack of protection for people on bikes.

> “White lines do not work”: Oxford campaigners call for urgent action after cyclist is killed at notorious junction

Despite being remodelled in 2013, local cycling campaign group Cyclox, supported by Cycling UK, argued that the overhaul was still not enough to encourage less experienced cyclists – or those who do not ride a bike at all – to travel through the roundabout, with the group consistently calling for an element of segregation to be introduced.

The tragic death of Dr Felce in March has sparked the latest attempt by the council to make the roundabout safer for people on bikes. 40-year-old lorry driver Robert Whiting, who was uninsured, unlicenced, and under the influence of cocaine at the time of the fatal collision, was sentenced to eight years in prison for killing the research scientist and mum-of-two.

The work, which forms part of the council’s Vision Zero strategy to eliminate all road deaths by 2050, includes amendments to road markings and traffic signs and the installation of light bike lane segregation, road studs, bollards, and cycle stands.

Cyclox’s chair Dr Alison Hill believes that these changes, though not as radical as some activists may have hoped, will still “make a difference” to the safety of cyclists in the city.

“The Plain roundabout is a deterrent to many people who want to cycle between east Oxford and the city,” Dr Hill told the Oxford Mail this week.

“It has the reputation of being the most dangerous junction in the UK outside London.

“We appreciate that the county council has involved us and other cycling groups in advising on changes to the junction to help improve safety.

“Ultimately much more radical changes will be needed to eliminate serious collisions, but these improvements will make a difference. We look forward to working with the county council to improving safety for cycling at other junctions around the city.”

“The work on The Plain is designed to make it safer and easier to use,” Liberal Democrat councillor and Oxfordshire’s cycling champion Dan Levy added.

“It is a complicated junction, and has put some people off cycling through the area. Combined with other improvements, like the better bike lanes down Iffley Road, we believe The Plain changes will make a big difference to how easy it is to get between east Oxford and the city centre.

“Among other things, the new design will make it easier to tell where all road users are headed, so it will be better for car users too.”

> Oxford roundabout where cyclist was killed to be made safer, works to be completed this month

When the urgent improvements were announced earlier this month, Andrew Gant, the council’s cabinet member for highways management, said: “We have spent a considerable amount of time investigating ways of improving safety at The Plain roundabout.

“These changes were drawn up in collaboration with cycling groups and we are grateful for their help in this process.

“Our commitment to Vision Zero means we will continue to work with local cycling groups to help ensure new cycling infrastructure is designed and delivered to maximise safety.

“We want people to feel safe and secure when travelling around the city and county by bike and it’s clear that we need to continue to improve.”