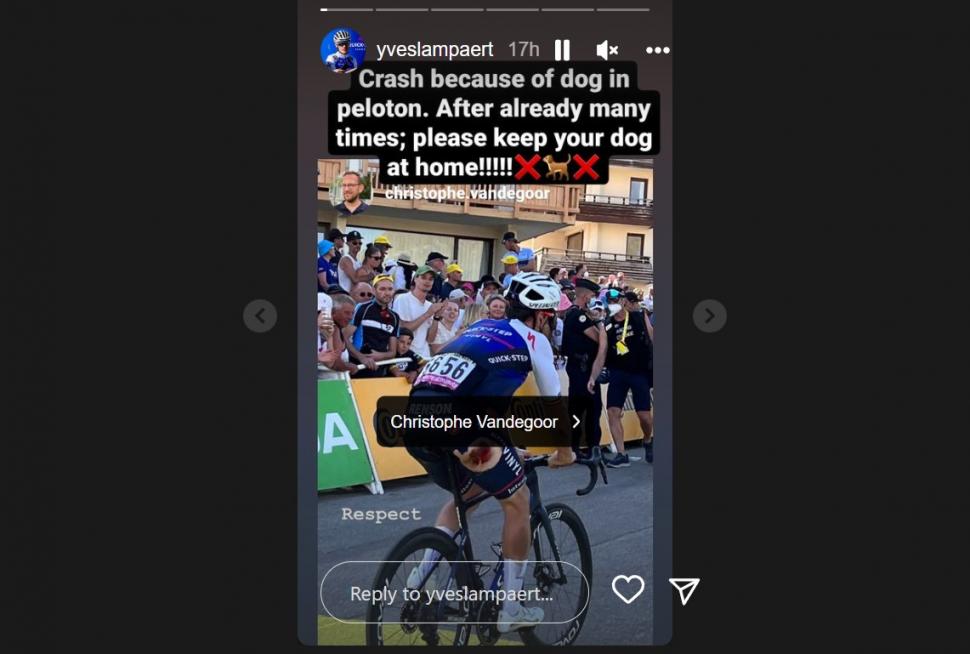 “Keep your dog at home!” is the message addressed to Tour de France fans by Yves Lampaert after the Belgian rider, together with Steven Kruijswijk of Team Jumbo Visma, hit the deck after a stray canine caused chaos at the start of yesterday’s Stage 12 of the race.

Footage posted to TikTok shot by a fan at the roadside shows the dog wandering across the road as the bunch approached and suddenly found itself surrounded by the speeding peloton, and seemed to be looking round trying to find a way out, and it seems fortunate that no other riders came down.

Quick Step-Alpha Vinyl rider Lampaert, who was the first man to wear the yellow jersey during this year’s race, was left with ripped shorts and nasty looking road rash on one of his buttocks.

It was the last thing he needed at the start of a day that featured three Hors-Categorie climbs – the Galibier, he Croix de Fer, and a summit finish on the Alpe d’Huez.

“Suddenly that animal crossed the road and I had no way out,” the Belgian rider, quoted on HLN, said after the stage.

“I could have done without that at the start of such a tough ride,” he added.

In a post on Instagram, Lampaert pointed out that there had been similar incidents in the past, adding, “Keep your dog at home!”

One such previous incident came in 2020 when a dog walked into the road as the breakaway group in a Giro d’Italia stage approached, and the previous year another dog got involved in the action at a cyclo-cross race in Belgium.

In the Tour de France itself, a Pyrenean mountain dog caused a crash in the 2012 edition of the race, leading Philippe Gilbert to stop and berate the animal’s owners.

Away from racing, meanwhile, Rigoberto Uran of EF Education=EasyPost appears to be a bit of a dog magnet, with Velon last week reposting footage that originally surfaced in early 2021 of the Colombian being chased by different dogs during training rides.