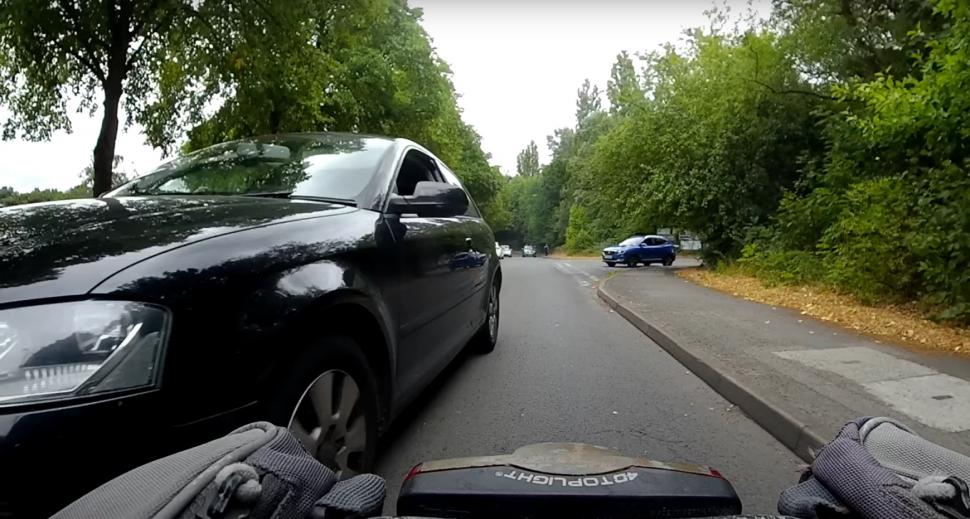 Near Miss of the Day 846 (updated): Motorist escapes punishment for extreme close pass and deliberately reversing into cyclist

West Midlands Police say that the driver was not prosecuted because the two-week time frame had expired, though the cyclist claims that he was told by police that the the alleged collision was not “clear” in the video
by Ryan Mallon

Update: West Midlands Police has told road.cc that a motorist, who committed an extremely close pass on a cyclist before slamming on his brakes and appearing to deliberately reverse into the rider, avoided punishment because the victim neglected to report the incident within the required 14-day time frame.

As part of our original Near Miss of the Day article (which can be found below), road.cc reader James told us that he submitted the clip to West Midlands Police’s ‘Non-Stop Self Reporting Collision Form’. After receiving no response for several months, he later contacted the force’s Traffic Investigation Unit, who asked him to resubmit the footage.

However, while James claimed that an officer from the Traffic Investigation Unit told him that there was no “clear video” of the collision, West Midlands Police has told road.cc that the driver was not prosecuted simply because the two-week window for issuing a Notice of Intended Prosecution had expired by that point, and that the cyclist was invited to “pursue an allegation of assault”.

“The video footage of an incident in July last year was submitted to us via our website in November,” a spokesperson for West Midlands Police told road.cc.

“Our traffic office contacted the cyclist within 48 hours to advise him that if he wanted to pursue an allegation of assault, he would need to report that to us via 101, but the timeframe for us to issue a Notification of Intended Prosecution (NIP) for a traffic offence had expired.”

Responding to the police’s statement, James said that the incident had been passed to the Traffic Investigation Unit “within 48 hours, well within the time limit”.

“The limit for a collision is also six months,” he said. “I contacted TIU before six months had passed and they informed me that the collision wasn’t on camera and they wouldn’t continue with a prosecution since it was several months ago.”

As we noted in our guide to reporting near misses or collisions to the police, any notice of intended prosecution must by law be issued to a registered keeper or owner of a motor vehicle within 14 days of the alleged offence. So, the earlier you submit your footage, the more time police have to investigate the incident, increasing the likelihood that dangerous drivers will face some sort of punishment for their actions.

Of course, as we saw with this incident in Coventry, even that may not be enough to secure a fair outcome…

You can read the original article below:

A motorist who committed an extreme close pass on a cyclist, missing him by a matter of inches, before slamming on his brakes and appearing to deliberately reverse into the rider, escaped punishment after West Midlands Police deemed that the collision was not captured clearly enough in the video.

road.cc reader James was cycling on Willenhall Lane in Coventry last July when the driver of an Audi – who, as James notes, appears to be holding a joint in his mouth in the clip – dangerously overtook him.

After James vocalised his disgruntlement with the driver’s too-close-for-comfort pass, the motorist slammed on the brakes. A staring and muttering match then ensued, before the hooded motorist appeared to have had enough.

However, before driving away he then decided to leave James with a parting gift by reversing back towards the cyclist (and over the white line into the next lane), appearing to ram him.

“After the incident I called 999 because the driver has what appears to be a joint hanging out of his mouth, although it has gone out,” James tells road.cc. “Unfortunately I gave the 999 operator the wrong registration.”

> Near Miss of the Day 845: Cyclist close passed... by driver with bike racks on their car

That proved only the start of James’ troubles while reporting the incident.

“I reported it to West Midlands Police via their online ‘Non-Stop Self Reporting Collision Form’ and I was informed the video would be sent to the Traffic Investigation Unit,” he says.

“Several months later when I chased it up with TIU, they had no idea what incident I was referring to and asked me to send them the video via the Nextbase online reporting form.

“I did this and someone from TIU called me to say that the collision, which I thought was very clear, isn’t actually captured on video. They told me the bike shakes but there’s no clear video of the car actually hitting the bike so this isn't being treated as a collision.

“They thought that the suspect would claim that there was no collision and that I just shook the bike to make it look like there was.”

> Near Miss of the Day 844: Driver insists cyclists who film motorists are asking to be hit

He continued: “The time limit for sending a NIP for the close pass had also expired, so the driver got away with no consequences.

“I suspected at the time that reporting via the ‘Non-Stop Self Reporting Collision Form’ was the wrong thing to do – it would take weeks or months for any action to be taken, by which time it would be too late.

“I should have reported via the Nextbase portal for the TIU to handle it. They might have just got back to me and told me to report via the ‘Non-Stop Self Reporting Collision Form’ or they might have just processed it as a close pass. Regardless they wouldn’t have sat on it for weeks or months.

“Due to the collision not being clear – though I think it is and I was there to witness it as well – and due to the delay, the decision was made not to refer to the Crown Prosecution Service.”

“I was surprised at outcome of this deliberate collision,” James concludes. “No action of any kind.”

West Midlands Police has been contacted by road.cc for comment.

> Near Miss of the Day turns 100 — Why do we do the feature and what have we learnt from it?