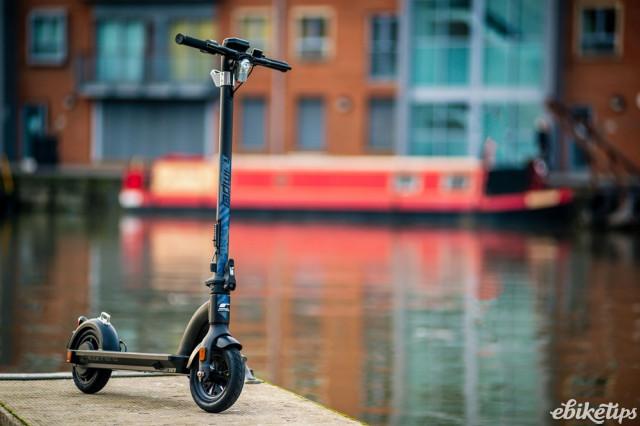 A new study from the Royal Society for the Prevention of Accidents (RoSPA) has claimed it is five times safer to ride an electric scooter than to ride a bicycle – adding that its research showed that the risk they are often said to pose to pedestrians is not borne out by official casualty statistics.

Privately-owned e-scooters are technically classified as motor vehicles and are banned in the UK and can only be ridden on private land with the landowner’s permission, but it is not against the law to sell them and sales have soared in recent years with many ridden illegally on public highways and on pavements – sometimes resulting in confiscation by the police.

Yesterday, transport secretary Grant Shapps told the House of Commons Transport Committee that the government plans to crack down on illegal sales of e-scooters – but added that approved models may be allowed to be ridden on the public highway, with legislation possibly being introduced in the Queen’s Speech on 10 May.

> E-scooters and the law: When and where are you legally allowed to ride an electric scooter?

In England, the Department for Transport (DfT) already permits trial hire schemes of e-scooters, with around 50 towns and cities currently participating in the initiative.

The trial sees people aged 18 and over who posses a full or provisional driving licences able to hire them from operators including Dott, Lime, Voi and Neuron Mobility, with the e-scooters geofenced so they can not be taken out of a specific area, and third party insurance provided as part of the hire package.

Neuron Mobility partnered with RoSPA for its study, which analysed DfT data, including road traffic casualty statistics, and compared e-scooters with other forms of transport.

> Near Miss of the Day 753: Wrong-way e-scooter rider cuts across cyclist

It also discovered that almost all reported incidents involving e-scooters happened in local authority areas where no rental scheme was in operation, which RosPA said underlined how safe such schemes were proven to be, in part due to the safety checks and regular maintenance and servicing carried out by operators.

The study concluded that:

The key finding is that e-scooters have lower casualty rates compared to other travel modes.
Our findings indicate that the risk to pedestrians is relatively low, despite the common perception.
We also found that there was no significant rise in incidents in the evening, again contrary to the perception that e-scooters are associated with anti-social behaviour around common pub closing times.
Private sales data and a more stable dataset (and a representative ‘average’ travel year to collect data) will enable firmer conclusions to be drawn in future.

Its authors said that “these findings suggest some important safety factors that should be taken into consideration for future E-scooter use in UK,” and made the following recommendations:

Given the rate of crashes that take place on single carriageways, further investment in road design improvements, including segregated bike and e-scooter lanes, would be beneficial.
Safety standards should be applied to improve the visibility of e-scooters on the road, including those that relate to indication, lighting and braking.
Providing mandatory training on the Highway Code and the practical operation of e-scooters would be beneficial for all users.
Awareness and training on e-scooter behaviour for other road users, in particular car drivers, would be beneficial.
E-scooter users should be encouraged to wear helmets when riding.

“Whilst it’s clear from the data available, that e-scooters in general carry a comparatively low risk to third parties and a risk for riders which is less than that of bicycle user’s, safety must remain a focus for everyone involved in the e-scooter industry,” the report said.

“RoSPA encourages all e-scooter operators, and manufacturers of private e-scooters, to increase their focus on safety, including product design and manufacture, passive safety features and rider education programmes,” it added.

“We also encourage riders to follow the rules laid down in the Highway Code and to protect themselves by using lights, good road craft and a helmet.”

RoSPA’s executive head of policy and research, Nathan Davies, said: “E-scooters are clearly set to be a long-term feature of our transport mix and it’s of pressing importance that we understand their impact on road safety and how they can be made safe for everyone to use.

“This report shows that e-scooters compare favourably to other kinds of vehicles and do not represent any greater safety risk to other road users and pedestrians. However, there is still a lot of work that needs to be done to ensure they are integrated on our highways and make sure both e-scooter riders and cyclists are offered greater protections from motor vehicles, which were the source of the vast majority of incidents.

“Rental e-scooter operators, like Neuron, taking part in the Department for Transport’s trial schemes have demonstrated a strong commitment to safety and rider education. However, we need to see these initiatives filter across to private sale models, where the majority of incidents occur, to ensure any wider rollout is done with safety as a priority.”

Neuron Mobility’s UK George regional manager, George Symes, added: “As a relatively new mode of transport there is often a misperception that e-scooters present a greater risk than some other forms of transport, but the data shows this simply isn’t true.

“We welcome RoSPA’s report which shows that e-scooters – particularly rental e-scooters – compare very favourably to bikes and motorcycles when it comes to the number of incidents.

"Neuron’s number one focus is safety. We evaluate every incident that takes place in our cities to assess how we can reduce the risk of it happening again.

“Across the UK we have implemented a range of initiatives to make our operations safer, including an online safety course developed with RoSPA, regular ScootSafe events in city centres and universities and incentives for helmet use and safe parking.

“We know that with the right investment in technology, education and infrastructure, e-scooters can be made even safer and more accessible.”