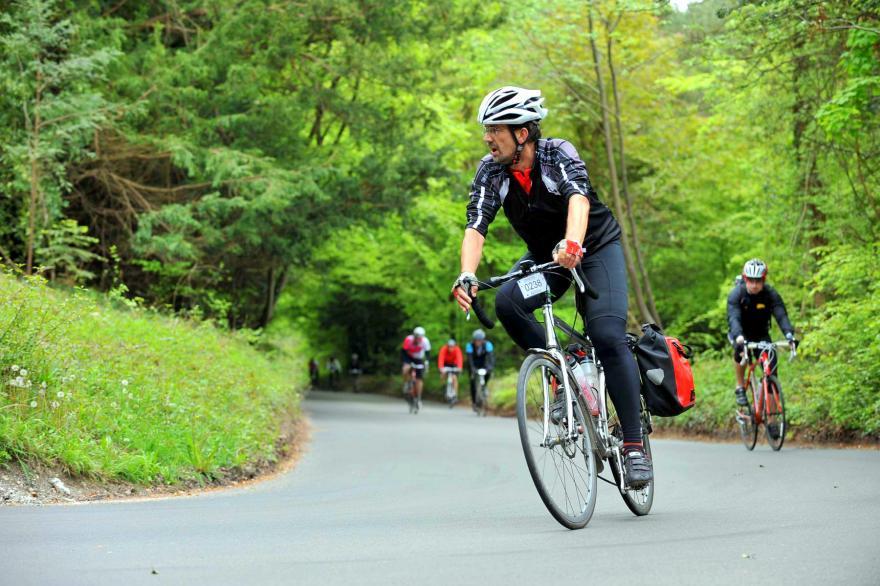 Updated to include quote from Roger Geffen of Cycling UK.

An article in the Sunday Times analysing differences in cyclist casualties at weekends between people riding in urban areas and those cycling in the countryside makes no mention of the danger motorists pose to people riding bikes in urban areas – instead apparently pointing the finger at riders chasing KOMs on Strava in locations such as Box Hill and the Yorkshire Dales.

The article was published on Sunday under the headline, ‘City cyclists safer than weekend warriors’, with the sub-heading, ‘Sunday ‘Mamils’ racing against the clock may be pedalling into greater danger than the average bike commuter’.

Of the 20 hotspots shown in the infographic, several are in Surrey, with Box Hill & Brockham topping the list.

But several areas of London appear, too, with Strand, St James & Mayfair – a large swathe of the city centre – in second.

Outside the centre of the capital, Richmond Park, Sheen Gate & Petersham appears in 11th place.

Both Oxford and Cambridge are there too, as are areas of Brighton and Portsmouth, while three areas in the north of England – Mobberley, Plumleigh & High Leigh in Cheshire, and the Upper Dales and Menwith, Beckwithshaw & Denton Moor, both in Yorkshire.

“Every urban cyclist has a story of a near-miss while commuting: a car swerving into a cycle lane, a pedestrian stepping into the street without looking, the door of a parked car swinging open,” the article begins.

“But new research on accidents reveals an even greater danger: riding in Surrey at the weekend can seriously damage your health.”

The split, in fact, is 10 urban areas vs 10 rural areas, but it is the latter that the article focuses on, saying that since 2009, “there have been 25 serious crashes in the Box Hill & Brockham neighbourhood, compared with 20 in the Strand, St James & Mayfair areas of central London.”

Given the relatively small number of incidents, its highly questionable whether the difference is statistically significant, and of course the two areas are markedly different.

The former, especially since the 2012 Olympics, has been a magnet for cyclists from the south east and beyond and moreover, since 2013 on one single day each year 25,000 riders have taken to Box Hill for RideLondon.

The area of London that sits in second place, meanwhile, includes some of the capital’s busiest and most intimidating streets, including the Strand itself, Trafalgar Square and Piccadilly, and at weekends a high proportion of people cycling there are likely to be tourists on the city’s hire bikes.

Despite the equal mix of city vs countryside locations, however, the newspaper insists that “The findings challenge the notion that cyclists are most at risk on busy urban streets.

“Instead, the lure of testing climbs and fast descents on picturesque country lanes appears to be leading to a disproportionate number of weekend victims. Rural A-roads carry only 4 per cent of the country’s overall cycle traffic, yet account for a quarter of all bike-related deaths, rising to 30 per cent at weekends.

“In the past decade more fatal accidents have occurred on Saturdays (161) and Sundays (159) than on Mondays (143) and Wednesdays (157) — even though the number of trips by bicycle is a third higher on weekdays,” The Sunday Times continues.

So, what’s to blame? Well, the newspaper strongly implies that it’s cyclists themselves.

“While city planners have gone to great lengths to make commuter cycling safer, a different dynamic appears to operate in the case of weekend riders,” it says.

“For those in pursuit of personal best times for well-known climbs, the reward for reaching the top is high-speed thrills on the way back down.”

Noting that more than 113,000 people have posted climbs of Box Hill to Strava, the newspaper goes on to look at Richmond Park, another hugely popular destination for the capital’s cyclists and which was recently reopened to motor traffic after cars were banned during lockdown.

There, the article says, London cyclists “race for personal bests around the park’s seven-mile outer loop. The highest average speed recorded by any of the 56,000 riders who have posted on Strava is 28.3mph. One Sunday morning in August 2014 a male cyclist was killed in the park. There have been 11 other serious crashes since 2009.

“Middle-aged men in lycra – Mamils – may need to exercise caution as well as their calves,” it adds. “Those aged 46 to 55 have accounted for a sixth of all cycling deaths in the past decade.”

The Sunday Times concludes its article by suggesting that virtual indoor cycling may provide “a safer alternative” – but even then, it cautions “Just do not start pedalling until you have replaced your rear wheel with a stationary device – even virtual cyclists can end up in hospital.”

Those of you who follow cyclist casualty statistics closely will have already realised that there are some huge problems with an approach based purely on the number of incidents.

Naturally, areas that are the most popular with keen road cyclists, who may be training for or even taking part in sportives, will see a greater number of incidents purely due to the numbers involved.

Ditto the cities – Oxford, followed by Cambridge – where cycling is most embedded as a means of daily transport, as well as the parts of London most popular with leisure cyclists at weekends.

But to attempt to come to a meaningful conclusion based on such tiny sample sizes – the Box Hill & Brockham area’s count of 25 equates to roughly one every six months – would strike many as disingenuous.

Even broadening the scope to include injuries of all severities, the sample sizes are still very low, but something very interesting happens.

Box Hill & Brockham drops to ninth on the list, with 52 – while the eight areas above it are all in cities, topped by Strand, St James & Mayfair at 112.

Any robust comparison of cyclist casualties between different areas also needs to take into account the total distance travelled by riders in the period concerned, something that is impossible to calculate.

And while The Sunday Times is correct that rural A-roads account for a disproportionate number of cyclist deaths, there is a very good reason for that – drivers, who do not warrant a single mention in the article.

That’s despite motor vehicles being involved in most fatal incidents in which someone riding a bike loses their life – and there were upwards of 1,000 of those on Great Britain’s roads in the decade concerned.

We’ve covered hundreds of those in some form or another here on road.cc, as well as at least two of the three specific cases The Sunday Times highlights in its article, which share one common feature – no motor was involved.

The newspaper doesn’t give specifics, but we will.

In 2014, Dr Sian Lim died in London’s Richmond Park after he crashed on a descent, possibly due to skidding on gravel according to another cyclist who had come off his bike at the same spot a month earlier.

Also referenced is the August 2015 death of Dr George Ballard, who was killed when he crashed into a wall after his rear wheel locked at the foot of the descent to Dibbles Bridge, a notorious blackspot in the Yorkshire Dales where at least three cyclists have died in recent years, the most recent fatal crash happening just a fortnight ago.

An earlier fatality there, in April 2014, is not mentioned in the article, but one near Bolton Abbey in February 2015 is. That incident claimed the life of Craig Armitage, who had been taking part in the Otley CC Reliability Ride.

A driver was subsequently cleared of causing his death by careless driving – but there is no mention of a motorist being involved in that fatal incident in the newspaper’s article.

The Sunday Times article was published on a weekend when sister newspaper The Times launched a major new cycle safety campaign, with the daily newspaper saying “The government should move fast to enhance safety for cyclists.

We’ll have more on that on road.cc tomorrow – but against that background, the Sunday paper’s article certainly strikes a very dissonant note.

“The Sunday Times accurately reports that the risks of cycling on rural lanes are significantly greater than on rural lanes. However it then uses derogatory language about ‘Mamils’ to suggest that it is the cyclists themselves who are at fault.

“If only the Sunday Times had mentioned these factors, its report would have been more accurate and a lot less prejudicial.”