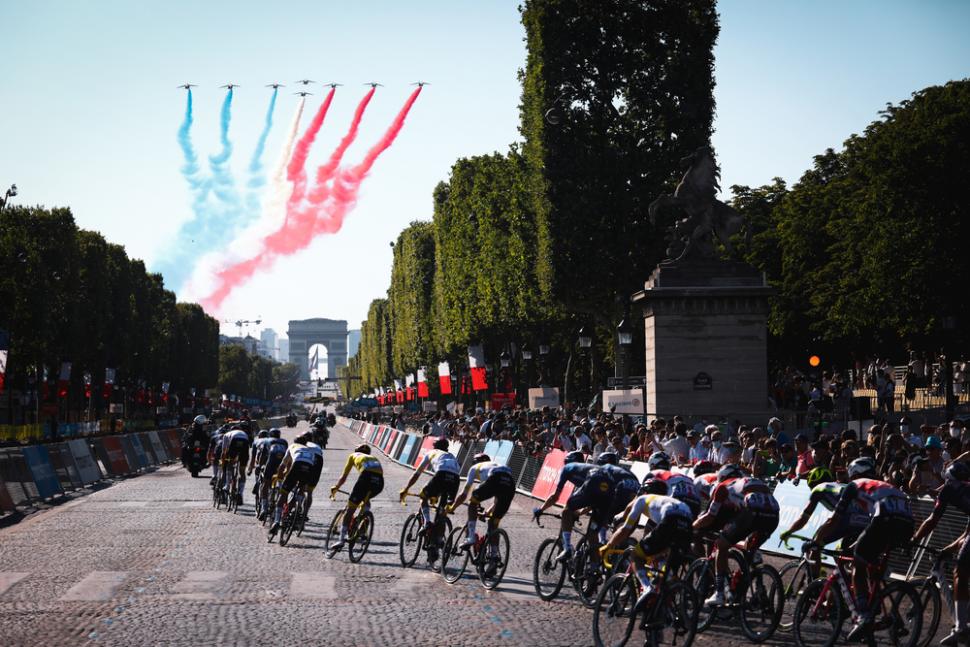 Wout Van Aert of Jumbo-Visma has won today's closing stage of the 108th Tour de France in Paris, denying Mark Cavendish of Deceuninck-Quick Step – third today – the chance to make history by setting an all-time record of stage wins. The former world champion remains tied on 34 victories with Eddy Merckx, but wins the green jersey for the second time in his career, 10 years after the previous time he topped the points classification.

Tadej Pogacar of UAE Team Emirates is confirmed as the overall winner, retaining the yellow jersey he won last year, as well as the white jersey of best young rider and polka dot one as leader of the mountains classification.

The overall podium was completed by Jonas Vingegaard of Jumbo-Visma, who completed the race 5 minutes 20 seconds behind Pogacar, with Richard Carapaz of Ineos Grenadiers a further 1 minute 43 seconds back in third place on GC.

Cavendish was unbeaten on his first four finishes on the Champs-Elysees from 2009-12 – although the finish line was in a different location today, around 300 metres further along from Place de la Concorde towards the Arc de Triomphe.

The 108.4km stage from Chatou proved an unusually scrappy finale to the race once racing began in earnest after the peloton hit the closing circuit, UAE Team Emirates leading Pogacar across the finish on the first of those laps line abreast, rather than single file.

Breaks went, but were brought back, and on the bell on the Rue de Rivoli at the start of the final lap, the race was together as 2018 champion Geraint Thomas of Ineos Grenadiers unsuccessfully tried to launch a late attack.

Cavendish at this point was around 30 places back in the peloton but was brought towards the front by his leadout man Michael Morkov, though coming off the Place de la Concorde and into the unusually long closing straight, it was Van Aert’s wheel he chose to follow.

It would almost certainly have been the correct one to go with, but for the fact that the Manxman had to check himself with the line in sight with no room on the left-hand side as Van Aert took the win, Jasper Philipsen of Alpecin-Fenix finishing second, with Cavendish banging his handlebars in frustration as he crossed the line in third place.

It was Van Aert’s third stage win of this year’s race, and the sixth of his career, and in this edition the three-time cyclo-cross world champion has demonstrated his extraordinary versatility.

His previous stage wins over the past three weeks came on Stage 11’s double ascent of Mont Ventoux, and yesterday on the second individual time trial – a discipline in which he hopes to win Olympic gold in Tokyo the week after next.

While Cavendish may not have made history today, it has nevertheless been a fairytale return to the race for the 36 year old, whose last stage wins before this year came five years ago in 2016, and even a week before the start of this year’s edition, his taking part in the race at all, far less winning four stages, seemed a distant prospect.

Next year’s race begins in Copenhagen – the city where Cavendish won the rainbow jersey in the World Road Championships in 2011 – and, having joined Deceuninck-Quick Step on a one-year contract for this season as late as last December, it’s far from certain he will have a deal to ride next year, far less take to the start line at the Grand Depart.

But given his performances over the past three weeks, aided by a team that rallied round him whether on sprint stages or to marshal him through the mountains within the time limit, the case for him lining up in Denmark in 12 months’ time is less of a distant prospect than it was a few weeks ago.

I’m without words. To be here again in Paris less than a year from my first victory is something really special and I am so happy to win this race again. It’s been an emotional few weeks.

All the team and staff were amazing and I am so thankful for all the hard work they have done to support me. I leave to the Olympics in Tokyo tomorrow with amazing memories. I can’t wait to come back to the Tour de France again soon.

I’m very happy. One month ago I wasn’t supposed to do the Tour de France and now I am here, after three weeks that will live long in memory.

I never imagined I would be again wearing green on the Champs-Élysées, but here I am, thanks to the amazing riders and staff of Deceuninck-Quick-Step.

They were a big part of this success and together we’ve been through so many emotion,

For me, to be back at this race that I love so much and do what I did was a dream. I am incredibly happy that I have my family here, I haven’t seen them in the last five weeks and and it feels great to share with all of them these unforgettable moments.

It has been a real rollercoaster. To finish the Tour in this way is beyond my expectations. This victory is priceless.

My team, and Mike [Teunissen] in particular, did a perfect job. I had confidence in Mike and just had to keep his wheel. Hats off to his lead out.