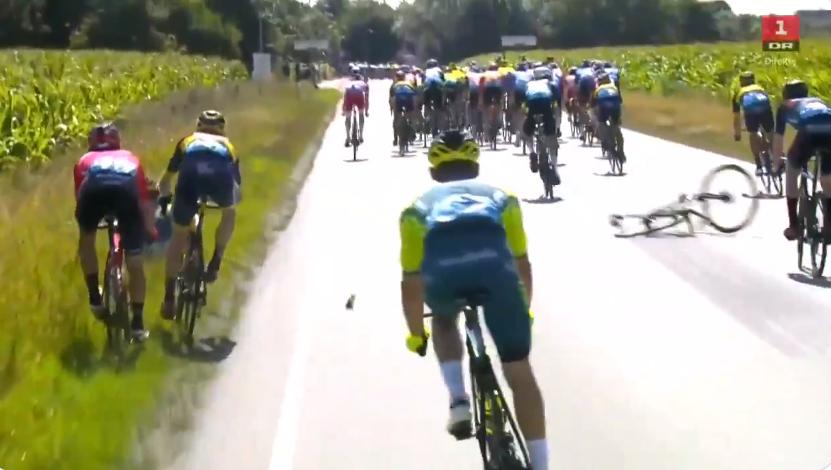 Footage of a crash at the Tour of Denmark yesterday caused by a bike that apparently made its own way across the road without a rider has reignited suspicions on social media about the use of concealed motors in the peloton.

The Danish rider Martin Toft Madsen of the BHS-PL Beton Bornholm team had to abandon the race after he crashed into the stray bike, subsequently tweeting footage of the bizarre crash with the caption “This is why I don’t like eBikes,” followed by a winking emoji.

While that tweet might be read as being posted with tongue firmly in cheek, among those to question whether there was a hidden motor in the bike was Antoine Vayer, who tweets under the name @FestinaBoy – he was a trainer at the team from 1995 to 1998, the year the Festina scandal engulfed the Tour de France – and who regularly uses his Twitter account to call into question what he views as suspicious performances.

While some replies agreed that the movement of the bike looked suspicious and could be explained by the presence of a hidden motor, others pointed out that the kinetic energy of a bike travelling at speed could explain why the wheel continued to spin and propelled the bicycle across the road.

According to road.cc’s Liam Cahill: “It’s likely a 50-60mm deep wheel spinning at what would likely be upwards of 50kph and the bike's contact with the ground is a bit of carbon frame, a bit of bartape and the sidewall of a tyre.

“People don't seem to grasp how much energy there is in a wheel. So as per usual, everyone commenting on Twitter saying that it is a motor is wrong,” he continued.

“Anyone with a motor isn't fighting to stay with the bunch in a crosswind. They'd be causing the splits.”

Don’t bring science into it, Twitter’s no place for that sort of rational and logical thinking

The bike itself may have belonged to the Vini Zabu rider Etienne van Empel, who also crashed out of the race – his team tweeted a picture of his ripped jersey after the stage.

Of course, we’ve been here before, including when similar suspicions were raised during the 2014 Vuelta against then Garmin-Sharp pro Ryder Hesjedal, the 2012 Giro d’Italia champion, after his rear wheel continued to spin following a crash.

Responding to claims he may have benefited from mechanical assistance, the Canadian said: “The back wheel’s still spinning because I was on the ground, it caught the ground and it took off a little bit.

“I think it’s funny in itself that they would even say that because even an assisted bike, it’s the crank that’s assisted so if the crank’s not moving and the rear wheel’s spinning, that’s not possible to help it. It’s not something that can do that to a bike.”

The fact remains that despite the UCI’s investment in technology aimed at detecting concealed motors, only one has been found in top-level competition.

That was in a bike prepared for the Belgian rider Femke Van den Driessche for the Under-23 women’s race at the Cyclo-Cross World Championships at Zolder in 2015.

The 19-year-old – who had already been the subject of suspicion among fellow riders following strong performances in the World Cup earlier in the 2014/15 season – received a six-year ban from competition and was also fined 20,000 Swiss Francs.