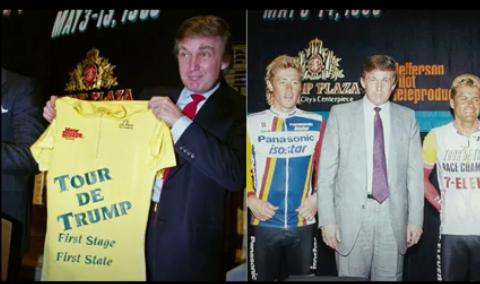 Has nobody told the Donald that cycling’s the new golf?
by Ryan Mallon

Well, that didn’t take long. Former President of the United States – and one-time sponsor of the ‘future Tour de France’ – Donald Trump wasted no time in poking fun at current President Joe Biden’s much-documented fall while cycling at the weekend… by posting a spoof video depicting one of the Donald’s wayward golf drives as the culprit behind Biden’s tumble.

The video, shared on Trump’s new social media platform Truth Social, sees the property tycoon-turned-reality TV star-turned-politician join in on the mockery aimed at Biden since Saturday’s fall, which some opponents of the President have used to discredit the 79-year-old’s ability to hold office.

> “This could be his GC over”: Joe Biden falls off bike after getting foot caught in toe straps

Biden was out for a spin with his wife near their home in Rehoboth Beach, Delaware, where the couple are celebrating their 45th wedding anniversary, when the President stopped to greet a crowd wishing him “Happy Father’s Day”.

As he drew to a stop, Biden fell victim to the dreaded toe strap, which kept a firm grip of his right foot, causing him to unceremoniously topple to the ground.

Asked how he was after regaining his feet, the President responded that he was “good” and blamed the “toe cages” for his fall, before remounting his bike to catch up with his wife.

Despite his brief incursion into the pro racing scene with the modestly-titled Tour de Trump in the late 1980s and early 1990s, Trump’s video isn’t the first time that he’s mocked a political rival for falling off their bike.

In 2015, the then-Republican presidential hopeful criticised the fact that US Secretary of State John Kerry crashed and broke his leg in the French Alps during Iran nuclear talks (a deal Trump would incidentally rip up while President).

“I don’t want him on a bicycle during nuclear negotiations.”

Trump, who admitted when he was running the Tour de Trump that he hadn’t cycled since he was seven or eight years old, continued: “I swear to you, I will never enter a bicycle race if I’m president.”

Nobody must have told him that cycling’s the new golf…