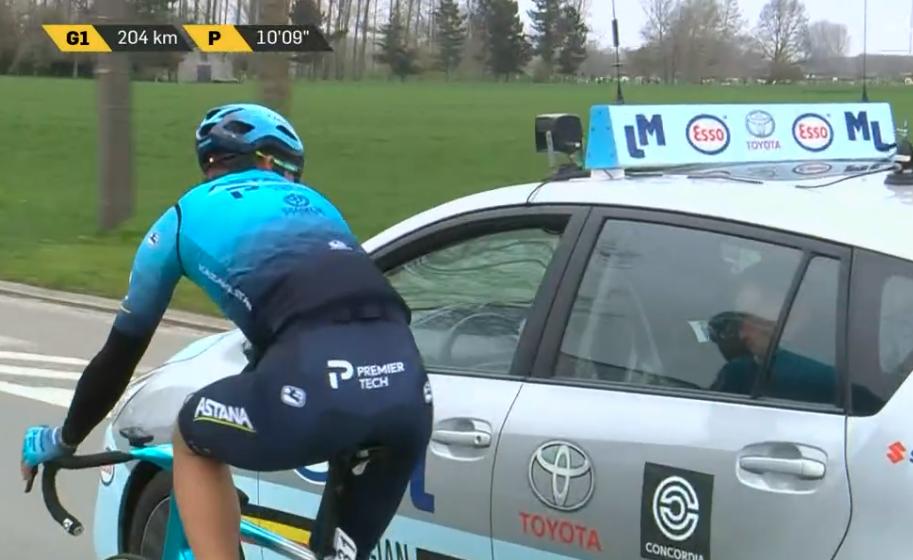 Two riders kicked out of Tour of Flanders after clash

'Muppets' Yevgeniy Fedorov and Otto Vergaerde have both been disqualified from the Tour of Flanders after an incident with 240km to go in the race. ...
by Will Bolton

Two riders have been kicked out of the Tour of Flanders after they clashed in the early stages of today's race.

The incident happened with 240km still to go with Astana rider Yevgeniy Fedorov pulling on his brakes at the head of the pack after trying to get into the breakaway, which was around 40 seconds up the road.

Otto Vergaerde of Alpecin-Fenix was on the rider's wheel at the time and he retaliated aggressively by getting alongside and swerving into Fedorov.

Bora-Hansgrohe’s Lukas Pöstlberger, sat behind the pair, could be seen raising his arms in exasperation.

Neither rider came down in the incident but the race organisers called both rider's team cars and expelled the athletes from the race.

It is kicking off early at the Tour of Flanders 🥊 pic.twitter.com/Zqwvy8jIJ4

Vergaerde could be seen remonstrating with the Astana team manager and the race organisers after being informed of the decision.

"Ultimately they are going to feel embarrassed and rightly so it's not the behaviour you want to see."

He added: "It's just ridiculous isn't it. I think those two riders they might have a punishment from the team as well.

"There might be something employed where they are banned [by the team] from racing for a month or something like that...

"Quite rightly they have both been disqualified."

He added: "You can see the swarm in the peloton it caused just by these two, I'm going to call them, muppets."

Speaking after the incident, Vergaerde said: “Fedorov wanted to try and chase up to the breakaway, but he braked.

“He almost knocked me down. I reacted. It’s a shame to let the team down. I was the one who was designated to ride behind the breakaway.”