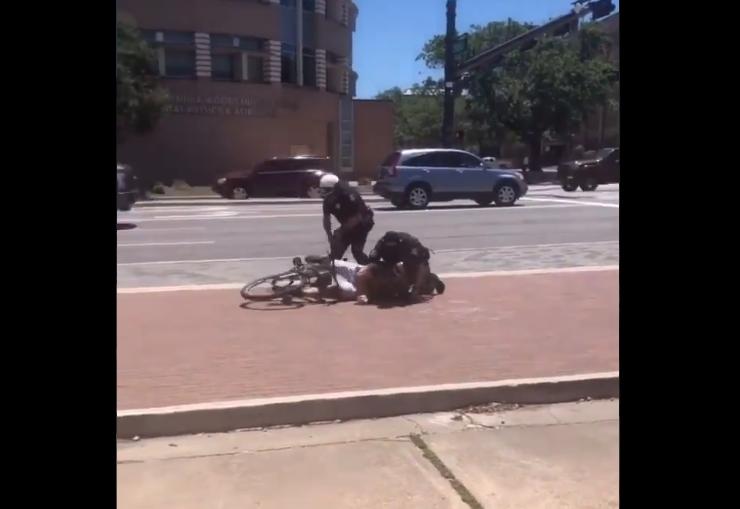 Video has gone viral of a cyclist being tasered by police close to a university campus in Texas after the rider went through a red light – although the police department involved, described as “Campus Cowboys,” say that the widely shared footage doesn’t show the full story.

The incident, which also saw the cyclist being tackled to the ground, happened last Wednesday lunchtime on University Drive near the campus of Texas A&M University in College Station, around 80 miles northwest of Houston, reports Kbtx.com.

A College Station Police Department patrol car followed the cyclist through a junction, whereupon the rider turned round and was confronted by an officer who, as he pulled him from his bike, said: “You’re under arrest.”

The officer used a taser on the cyclist, who can be heard to say “Oh f*ck.”

One Reddit user said after viewing the footage: “Campus Cowboys are the ones that couldn’t qualify for police.

“They’re just above Mall Cop in the pecking order. This is straight up police brutality and smacks of a payout and some firings.”

Video posted to Twitter suggested the rider was stopped and tasered for jaywalking, something police have denied.

Police in Texas go on a power trip and tase someone for jaywalking on a bike pic.twitter.com/ueVBG0aDRd

Indeed, the police department subsequently defended its officers’ reaction and claimed that the rider, a 34-year-old man, had been tasered after he resisted arrest.

“We’ve received a lot of hateful and vitriolic comments the past couple days regarding this incident,” wrote public information officer Tristen Lopez in a statement published online.

“The bicyclist was NOT randomly tackled and tasered for jaywalking, nor was he tasered multiple times.”

He continued: “Bicyclists are frequently involved in crashes along University Drive and while the cyclists are not always in the wrong, we do receive citizen’s requests to address the issue of cyclists not flowing traffic laws.”

He said that “the cyclist led our officer on about a 5-minute tour of the surrounding area before our officer finally found himself in a position to physically detain the cyclist.”

In line with standing regulations following deployment of a taser, an ambulance was called to the scene.

The cyclist, who was subsequently taken into custody, faces charges of evading detention, resisting arrest, and resisting transport.