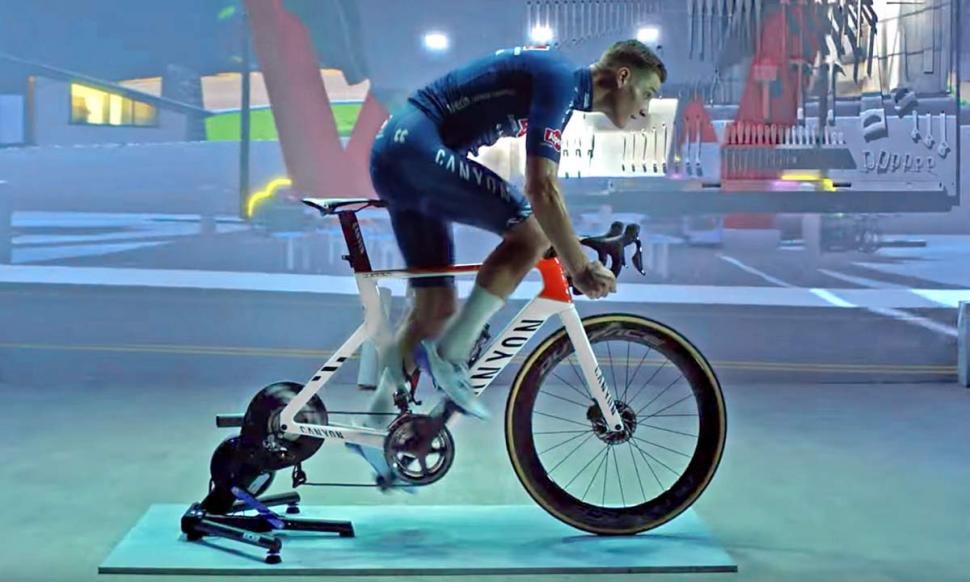 The virtual Tour de France is taking place on Zwift, an indoor cycling app that runs rather like a video game, allowing you to control an avatar. There will be six stages over three weekends with a mix of flat and hilly courses attracting some of cycling’s biggest names

Today sees the 2nd stage of the race and we've got some new riders lining up on what is a totally different course from yesterday. We stay in virtual Nice, but the riders are heading into the mountains with Zwift's Epic KOM dominating the stage.

The climb sends the riders up to the very top and with the steepest pitches towards the summit, we think that a well-timed attack could take the day, even though any solo escape would have to hold out on the descent and then flat final kilometres to the finish.

Zwift - Get set up on any budget

Two races will take place today with a men’s and a women’s race running over the same distance and on the same course.

With teams only putting four riders into each race, we expect to see riders brought in for one day and then replaced for the next stage. No single rider in the men’s peloton can race more than three stages while the women can do no more than four. As a result, we should see a good number of different riders lining up over the course of the virtual Tour.

Everything you need to know to try racing in Zwift

So far, the big names that we’ve seen confirmed as lining up for the virtual TdF include the Team Ineos trio of Chris Froome, Geraint Thomas and Egan Bernal. Cyclocross superstar Mathieu van der Poel will also feature with the Alpecin Fenix team.

1
Victory claimed for harassment campaign by “mob of decent people” as helmet cam cyclist deletes Youtube and Twitter accounts
2
Large vehicle may have crashed into controversial bike hangar, council says
3
167 cyclists – and just four drivers – fined in police crackdown during Tour Down Under
4
“Cyclists welcome – just in the right place”: Coastal path upgrades set to be shelved over concerns about environmental impact and “speedy cyclists”
5
Conor McGregor knocked off his bike... and gets a lift home off the driver who hit him
6
Fancy a 3D-printed saddle custom-made for your butt? Plus more tech news from DT Swiss, Giant, 3T, Chris King, Classified, Stages & more
7
Specialized closes inclusive women’s cycle clothing brand Machines for Freedom
8
Driver assaulted cyclist for questioning mobile phone use