What “Golden Age for Cycling”? The English council spending least on active travel is home to Boris Johnson’s constituency

A year ago today, Boris Johnson heralded “a new Golden Age for cycling” – but figures compiled by Cycling UK show that the council spending least on active travel in England is the London borough that is home to the Prime Minister’s own constituency.

According to the figures, which have been compiled ahead of today’s local elections taking place across England, the Conservative-run London Borough of Hillingdon, where Johnson’s Uxbridge and South Ruislip constituency is located, spent a paltry 20 pence per head on active travel in 2020/21.

That put it bottom of the list of 59 councils that responded to a Freedom of Information request from the national cycling charity, and the only London borough to appear among the lowest 10 spenders. 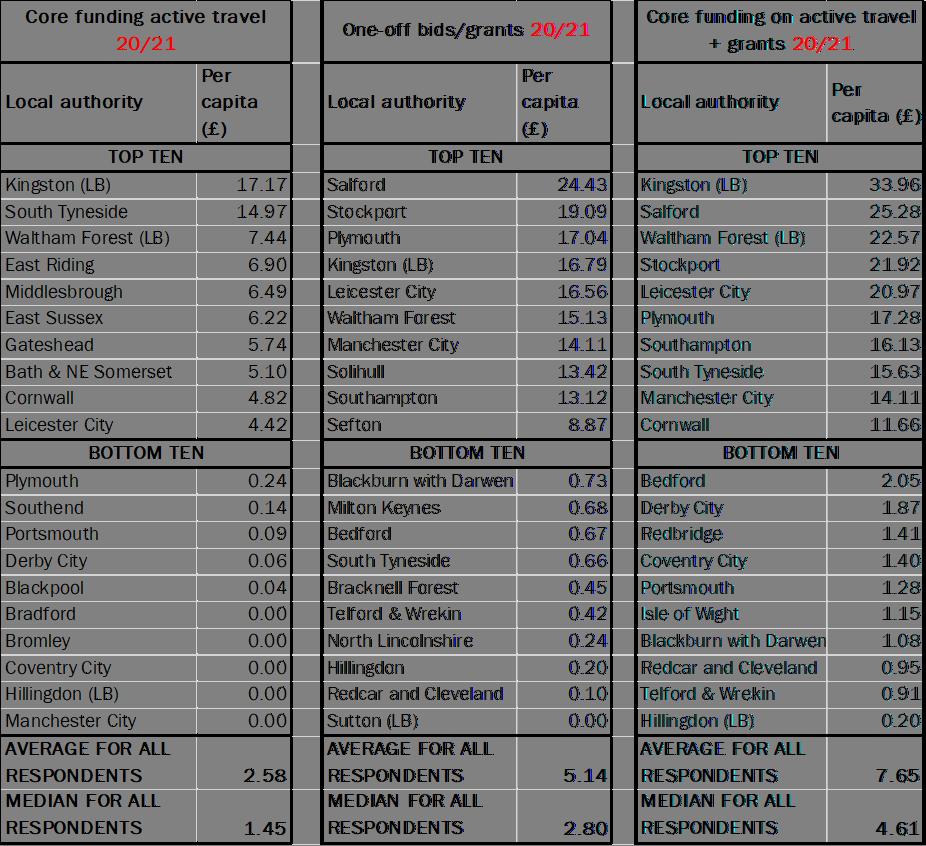 Based on core funding plus one-off bids and grants, the top 10 includes two of the three boroughs in the capital that have made huge steps in active travel provision through the Mini Holland programme – the Royal Borough of Kingston upon Thames, and Waltham Forest.

Indeed, Kingston’s spend of £33.96 per head – 170 times that spent in Hillingdon – is what the Cycling & Walking Alliance, of which Cycling UK is a member, called for councils to be spending on active travel by 2025, and double the £17 that it wanted to see invested in 2020/21.

It’s also noticeable that three councils in the top 10 – Salford, Stockport and Manchester – lie within Greater Manchester, where Labour Mayor Andy Burnham, standing for re-election today, and Chris Boardman have been developing the cyclist and pedestrian-friendly Bee Network.

Johnson himself was out for a bike ride yesterday with another mayor seeking a second term – West Midlands Mayor and fellow Tory Andy Street.

Having Govt's support over the past 4 years has been key to driving investment & jobs so I hope I'll have the opportunity to continue to fight for our regionhttps://t.co/GDymh329gt

Duncan Dollimore, head of campaigns at Cycling UK, told road.cc: “The Prime Minister’s message last year was that this would be a ‘Golden Age for cycling’, but some councils don’t seem to have received the memo, failing to put their core transport funding towards active travel, or secure grant funding, and in the case of West Sussex and Kensington, ripping out any infrastructure weeks after spending government cash to install it.

“Of course it would help if ministers made it clearer that this is government policy, and that councils are expected to invest in active travel, but with some authorities investing 170 times more per head than others last year, it’s obvious that levels of commitment towards cycling and walking differ hugely between councils.

“So, for people in Hillingdon, within Boris Johnson’s constituency, or in Telford, Redcar or Blackburn, it might seem that the Golden Age is at the end of a very long rainbow.”

He added: “Not every local authority has elections today, but if you live in one that does, please use Cycling UK’s online action to ask your candidates whether they’ll move up the gears and pledge to invest the money needed to deliver the infrastructure that enables more people to cycle.”