The Year by Dave Barter

8
10
Recounts the long history surrounding this extreme record, and gives some illuminating background to the current attempts
Weight:
652g
Contact:
www.v-publishing.co.uk
What the road.cc scores mean

Have you ever cycled 205 miles in a day? Do you think that you could do it again the next day, and maintain that as an average distance every day for a full year? For most people the answer is no, and even if you could you would still not beat the annual mileage record of Tommy Godwin.

Godwin's record of 75,065 miles has been attacked very few times since it was set in 1939, but then two serious attempts started at the beginning of this year, as reported on this website: our own Steve Abraham, and American Kurt Searvogel.

Given that recent increase in activity, this book by Dave Barter is well timed to provide more information about the history of this rather niche record attempt than you ever thought possible – and the extraordinary exploits and intrigue make for an unexpectedly good read. While it is true to say that you will not find a more thoroughly researched book about the subject, it is probably also true to say that you won't find any other book at all.

Every significant attempt on the record is covered in detail, including some that were unsuccessful. There is an excellent graphical summary in the book (reproduced below), which was created by Jo Wood, a professor of Visual Analytics. You can see where Abraham (the red line) had the accident that derailed his original schedule (with Searvogel being the blue line). Up until last year this graphic would not have changed for decades, but this year it was out of date before the book was even published. 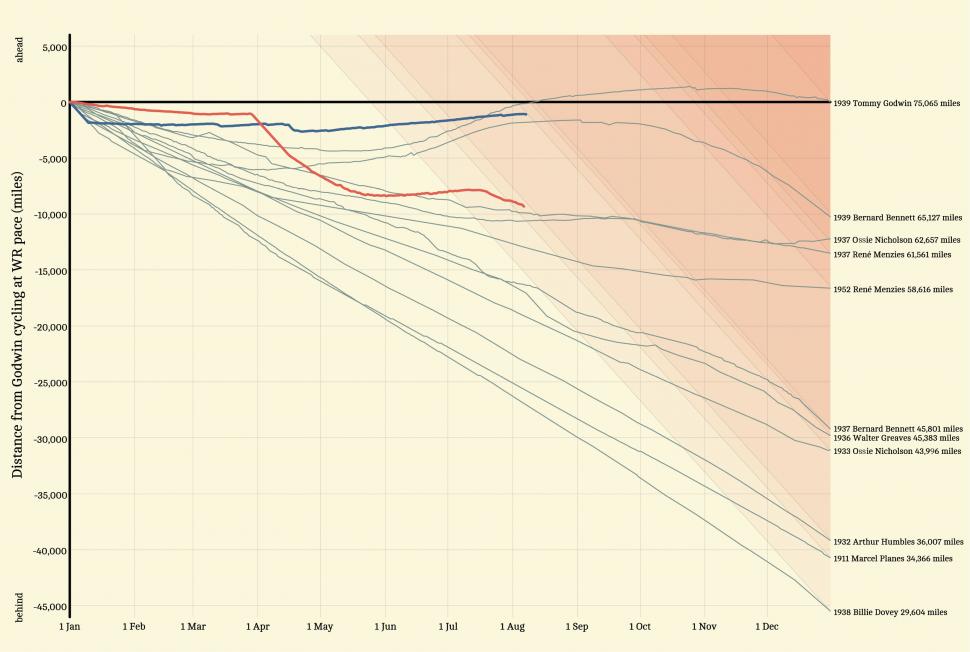 More recently Kajsa Tylen announced an attempt next year on the ladies record of 29,604 miles, set by Billie Dovey in 1938. Dovey was the only record holder that Barter managed to meet in person during his 10 years of research for the book, which he managed shortly before she died this year (at 100 years old). It makes for an interesting discussion, and despite the many advances in equipment that we enjoy today, Dovey still believed that 'modern cyclists have a harder time than we did due to the traffic on the road'.

Even as I was reading the book, another record attempt was announced, this time by Bruce Berkeley. He will probably be in the interesting position of not knowing exactly what distance he has to beat when he starts. For many years the magazine Cycling was the official recorder for anyone attempting the record, working to rules that they laid down in 1911. The biggest challenge for riders at any time is how to prove their mileage, and for many years this involved stopping at every major junction to have a passer-by sign your mileage card before then posting it to the magazine. Fail to do that and Cycling would only credit you with the shortest route between the two neighbouring waypoints. That is a lot of stopping, explaining, and licking of stamps, which won't do your average speed any good.

However, Tommy Godwin had to face additional adversity towards the end of his record attempt, as war was declared on 3rd September: now he was facing blackout conditions, which meant ineffective 'screened lights' on all road vehicles; signposts were removed to make navigation difficult for the enemy; gas masks had to be carried at all times; and the threat of conscription hung over him. For many, Godwin's record will always be seen as the benchmark – although it may be beaten, no one will ever have to overcome the same challenges again.

Of the other attempts on the record since Godwin's success, only one actually succeeded – sort of. Ken Webb did make it into the Guinness Book of Records briefly with 80,647 miles, before the doubts about his attempt gave them second thoughts. From what we read here it does seem too good to be true: he was holding down a full time job; it seems that Cycling Weekly (as it was now known) were not checking his mileage claims; and he even tried to take advantage of the 1972 leap year to claim an extra day.

One reason that discouraged record attempts for many decades was that there was no entity prepared to officiate after Cycling Weekly withdrew support. More than that, apparently they actually threw away some documents relating to their involvement during a clear-out in the 1990s. Eventually, in November 2014 the American Ultra-Marathon Cycling Association took on responsibility. It is now recording record attempts here under the banner of the Highest Annual Mileage Record.

The UMCA rules are similar to those of Cycling, with a few controversial exceptions. For example, recumbent cycles are now allowed (although not faired machines), and you can switch between bike types; you can start on any date and run for 365 consecutive days, whereas previously you had to start on 1st January; following support vehicles are now allowed, whereas at one time attempts had to be self-sufficient; and perhaps most surprisingly, pacing by other cyclists (or drafting) is now allowed.

> Buy this as a Christmas present – or find more ideas here

Just to add to the Godwin legend, when he had completed the annual record attempt, he carried on to complete 100,000 miles in 500 days. The weather was particularly adverse that winter, and on just one day he came off his bike 84 times. He also rode a few time trials along the way, just for the company, even managing 1.08.05 for 25 miles.

This book recounts the long history surrounding this extreme record, and gives some illuminating background to the current attempts. It is essential reading for anyone planning to attempt the record (!), and an entertaining and informative read for everyone else.

Recounts the long history surrounding this extreme record, and gives some illuminating background to the current attempts

Make and model: The Year by Dave Barter

"In 1939 British cyclist Tommy Godwin cycled 75,065 miles in a single year. Think about that for a second: it's an average of over 200 miles each day. And it's a mark that still stands after almost eighty years. In The Year, Dave Barter resurrects the legend of the year record – a challenge nearly as old as bicycles themselves – and the cyclists who pushed themselves to establish and break it."

There is no more difficult challenge in cycling. The Year is the definitive story of these phenomenal cyclists.