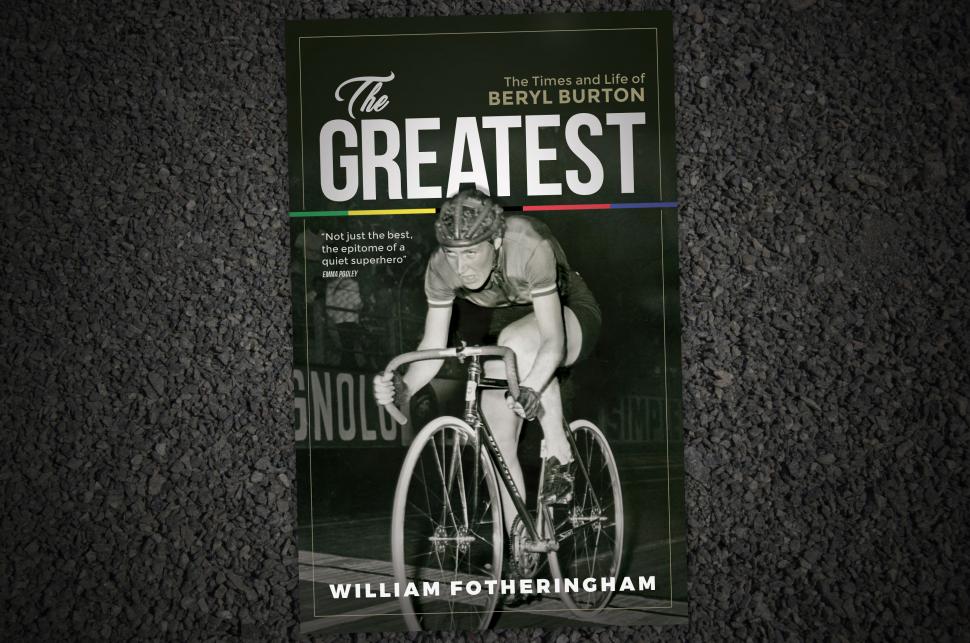 The Greatest – The Times and Life of Beryl Burton

9
10
One of the most dominant cyclists of all time gets the biography she deserves
Weight:
640g
Contact:
www.youcaxton.co.uk
How we test

When this biography of Beryl Burton was announced, I wondered why it had not been done before: Burton achieved a level of dominance that is hard to comprehend today, and it was worth bringing it to the attention of a modern audience. Fortunately, William Fotheringham has managed to do justice to Burton's impressive career in The Greatest, which tells her story even better than her autobiography did.

As Fiona Kolbinger won this year's ultra-endurance Transcontinental Race, I am sure I was not the only one to be reminded of a similarly impressive achievement by the late Beryl Burton: 'BB' is probably best remembered for winning a 12-hour time trial outright in 1967, including catching and passing the man who was busy setting the men's record. It only took two years for that men's record to be broken, but 50 for the women's.

Not surprisingly, Fotheringham gives that achievement pride of place in his book, but there were a handful of other events where Burton won outright (albeit without a national record), so the 12-hour result was no fluke. Further confirmation of Burton's abilities come from the 96 national titles across a variety of cycling disciplines will help, along with seven world titles. Even more impressive is how long she managed to keep up this level of dominance, winning the BAR (an 'all-rounder competition' for the best times over the fixed distances of 25, 50 and 100 miles) for a staggering 25 years in a row.

It is even more impressive when you consider the other challenges that Burton faced: cycling in the UK was in a very different position than it is now, as was women's cycling generally. Throw in a serious childhood illness and a job on a rhubarb farm involving hard manual labour, and you soon appreciate that success was achieved despite her situation, not because of it.

Fotheringham has specialised in writing biographies of some of the greatest cyclists, such as Eddy Merckx, Tom Simpson, Fausto Coppi, and Bernard Hinault, and after reading this book I don't think that anyone will doubt that Burton deserves her place in that group – with the usual caveats that it is always hard to compare performances across different eras, let alone between sexes.

Burton's status ensured her presence in both of the recent compendium books, The Hardmen, and Queens of Pain. She even had a play written about her.

I still have Burton's autobiography from 1986, Personal Best, and I thought it would be interesting to compare how the two tomes covered any given topic. As it turns out, Fotheringham has done the job for me, and he quotes extensively from the earlier book. The difference is that Burton recounts events purely from her own perspective, but Fotheringham is able to use contributions from numerous sources and interviewees.

An obvious example is the inclusion of input from other riders in that infamous 12-hour, including of course the unfortunate Mike McNamara – who was desperate for a pee, but wouldn't stop while he was being chased down by Burton. It was a relief for him to be overtaken so that he could relieve himself!

Burton may have been by far the better cyclist of the two authors, but the tables are turned when it comes to writing: Burton's own book is heavy-going at times, heavy with details and statistics, but Fotheringham's is as readable as his previous works. He notes that Burton doesn't give much information about her life outside cycling, giving 'absolutely no details of her parents' work, [and] she did not even provide the names of her parents', for example, whereas Fotheringham has provided a much more rounded and complete biography.

It was always going to be hard for Burton's achievements to gain the credit that they deserve when her autobiography only really appealed to cycling aficionados (and is now out of print); with Fotheringham's biography there is a better chance of a wider audience becoming aware of her exploits, and for Burton to gain the recognition that she would have surely received if she were competing today.

Being self-published, this book is not available from the usual outlets. One option is direct from the author for £20 plus £3.50 postage; it is also available from Isla Bikes for a similar price. However, the best deal at present seems to be from Prendas, using the link in the text above, where it costs £20 including the postage. In all cases, each sale results in a £1 donation to the Dave Rayner fund.

Make and model: The Greatest – The Times and Life of Beryl Burton by William Fotheringham

Beryl Burton overtakes Mike McNamara to clinch victory in the 12-hour race at Otley, Yorkshire. When she finishes the marathon event after 277 miles, Burton has beaten Britain's leading male time triallist and achieved something unheard of: she has taken a men's endurance record outright. The moment enters cycling folklore because of Burton's gesture as she overhauls 'Mac': unsure what to do or say, she offers him a liquorice allsort from her pocket.

Burton was a seven-times world champion and multiple national champion, and this was the greatest feat in her 30-year career. The Otley '12' should have been a groundbreaking moment in women's sport, but along with the rest of Burton's achievements, it has slipped into relative obscurity.

This new biography from best-selling writer William Fotheringham tells Burton's story in full for the first time, from the brutal illness that left her bedridden as a teenager to her quarter century at the top of women's cycling in the UK, and her premature death in 1996.

The fact that it exists.

The dearth of worthwhile images available from that era.

BB had a racing career that makes for a great story, and Fotheringham has a track record in producing memorable biographies: bring the two together and the result is as good as you would expect.