10
10
Keeping the same successful format for another year, its return will be welcomed by an appreciative audience
Weight:
2,085g
Contact:
www.theroadbook.co.uk
How we test

The Road Book arrived last year as a bold attempt to give professional cycling the statistical almanack that it lacked, and the expectation was that it would be an annual publication. The next edition has duly appeared, and it looks like it has found the right formula to ensure that it will be back for many years to come.

As you might expect, when The Road Book first appeared there were differences of opinions as to whether such a thing was necessary and if it would succeed – and I am sure that those debates will continue. If you welcomed the arrival of the book this time last year, then the good news for you is that there is a second edition; if you failed to see the appeal last time around, there will be little here to change your mind. However, there was never a reason to debate the quality of the finished product, which remains unsurpassed.

It seems that The Road Book team judged the book's appeal pretty well, in that they didn't sell out of the 2018 version immediately, but expect do so in the near future. Furthermore, many of those who bought the first edition are already back for the second: in fact, a healthy level of pre-orders for the 2019 edition suggest that it is on the way to achieving the same type of acceptance as Wisden, often seen as the benchmark in such matters. Mind you, there's a joke that Wisden's success is partly down to the inability of their elderly audience to cancel a direct debit. 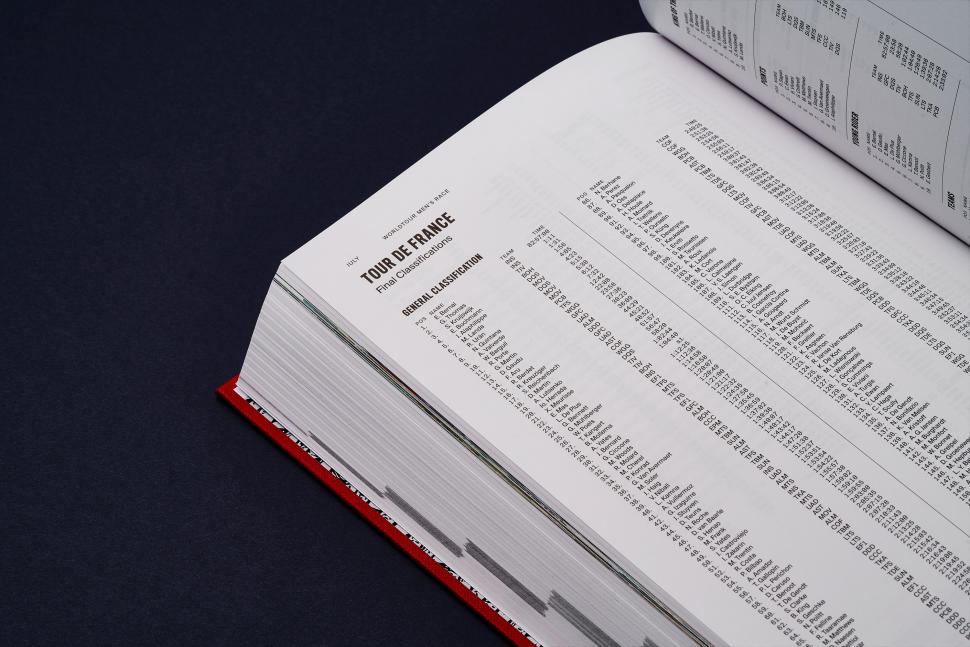 As you might expect, the 2019 edition follows a near-identical formula to that of 2018, with a few minor enhancements. You will get similar coverage of the same range of events, interspersed with the same sort of essays and pictures. Therefore, rather than repeat everything that I wrote last year, I will concentrate on what is different. Some categories have expanded, such as doubling the number of obituaries: I felt that we may have more 'big names' than usual in the list this year, with the likes of Paul Sherwen, Patrick Sercu, and Felice Gimondi appearing – or should that be disappearing? Maybe it just seems that way when you see a whole year's worth recorded.

More welcome is the increased space given over to the chapter called 'In the winners' words', with Philipe Gilbert, Richard Carapaz and Annemiek van Vleuten giving rare insights into their highest-profile wins.

There is an unusual contribution from the respected author Paul Fournel, in the form of a poem: I am sure that it will be as good as the rest of Fournel's writing, but since it is in French I can't tell – and even Ned Boulting's explanatory comments didn't help me much.

There are more conventional essays from several new contributors, with the names of Michael Hutchinson, Bob Roll, Tom Issit, and Orla Chennaoui being familiar to many of us: all the pieces are extremely worthwhile, and some are very timely. Amongst them, Chennaoui questions the dearth of female sports directors, Hutchinson interprets some of the power numbers that have been made available to us, and Matt Rendell explores his love of Columbian cycling. It does seem a pity that their audience will be limited.

The 31 pages of images come from 'renowned photographer' Russ Ellis this year: some seem familiar, some less so, but the selection does a reasonable job of capturing many key moments from the year of professional racing. They won't be the main reason to buy the book, but are a welcome bonus. Once again The Road Book draws upon an esteemed panel of judges to vote on their 'Rider of the Year' awards, and once again the recipients don't match the UCI's points rankings, nor those of ProCyclingStats – but I doubt that anyone would deny that they are all worthy winners: Annemiek van Vleuten and Julian Alaphilippe each win both the overall and 'most combative' prizes, with Chloé Dygert-Owen and Tadej Pogačar taking the 'young rider' awards. It just shows that points don't necessarily mean prizes. You will occasionally discover random charts and tables, which often throw up some unexpected information. For example, I suspect that many people could correctly name Thomas de Gendt as the rider to have participated in the greatest number of breakaways over the year: 17, helped no doubt by the fact that he was the only rider to start all three Grand Tours in 2019 – and he finished them. But how many people could name any of the three riders who trail him in a distant second place? Julien Bernard, Alessandro de Marchi, and Jesus Herrada apparently, all on 11. The arrival of The Road Book is a great way to bring the road season to an end, arriving as it does only a few days after the last race (the Tour of Guangxi on 22nd October). It will prove to be an agreeable distraction for fans during the off-season, helping the time pass until the start of the racing that will ultimately provide the material for the next edition.

Keeping the same successful format for another year, its return will be welcomed by an appreciative audience

Launched in 2018, The Road Book is the first of its kind, supplying every single World Tour race across the men's and women's calendar, exclusive essays from leading figures within cycling, team profiles and more.

The Road Book has become the indispensable companion to every serious cycling fan, commentator and admirer of the sport.

The Road Book 2019 raises the standard even further. Charting a momentous season in cycling including all three Grand Tours, the legendary Monuments, and the iconic Yorkshire held World Championships.

The 2019 edition is bigger and better. More essays, more images and more stats.

The Road Book almanack presents a unique chance to build a collection that will stand the test of time.

Does exactly what it sets out to do.

Its unique proposition for cyclists.

Would you recommend the product to a friend? Yes, but only to the few who would 'get' it.

It was a 10/10 last year, and there is no reason to change that this time: there is nothing else like it, it achieves its aim, and does it well.