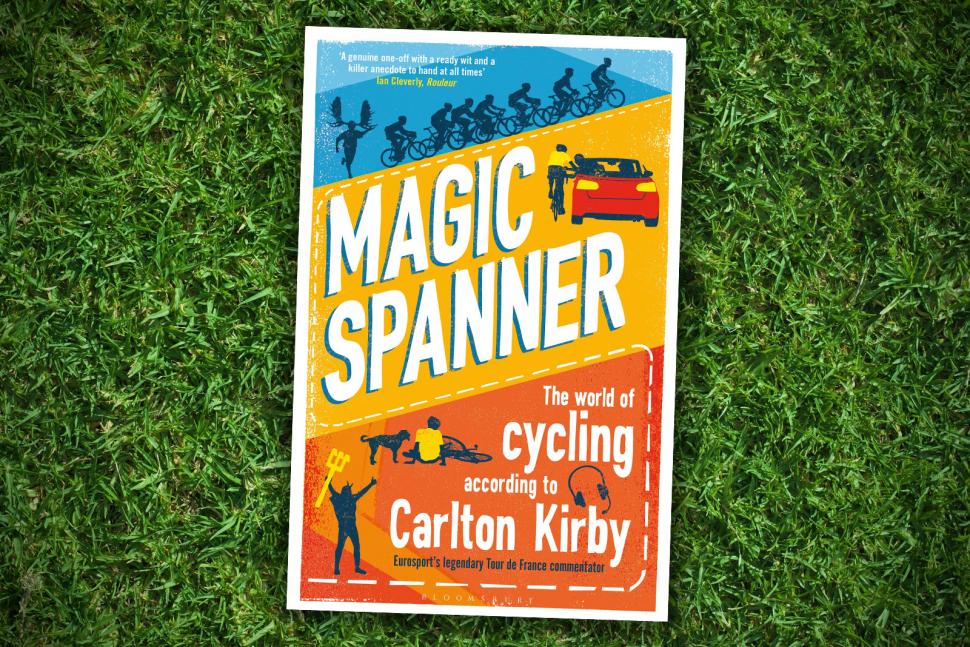 Magic Spanner The world of cycling according to Carlton Kirby

7
10
Easy-to-read and entertaining view of life as a commentator
Weight:
390g
Contact:
www.bloomsbury.com
How we test

Commentators are well placed to observe the whole circus of professional cycling, which gives them plenty of material for a 'behind the scenes' book such as this. In Magic Spanner, Carlton Kirby will entertain you with amusing stories about his work as a commentator – it seems that he often manages to get himself into particularly awkward situations (or perhaps he is just a really good story teller), and it makes for great entertainment.

Many of you will be familiar with Kirby from his commentating duties on Eurosport, where it seems that his 'unique and, at times, excitable style' earns him as many detractors as admirers. People seem to criticise him for (a) talking too much, and (b) spouting irrelevant drivel. I don't watch my cycling on Eurosport, but I would have thought that such volubility could be useful when working alongside Sean Kelly, the man with the reputation for nodding in answer to questions on the radio...

As Kelly puts it in his foreword: "Wherever he goes there are donkeys missing their hind legs. HE DOESN'T STOP!"

Magic Spanner is a wide-ranging collection of anecdotes from Kirby's time as a commentator. Not surprisingly, it reminded me of similar publications from Ned Boulting. It is not his biography, nor does it have race reports, it is simply an undemanding but enjoyable insight into his experience of life behind the microphone.

The title of the book comes from the ruse used by mechanics to 'tow' a rider back up to a disappearing bunch after he or she has been delayed by a mechanical mishap: there won't be any need to work on the bike, but it provides an excuse for a rider to hang on to the moving vehicle. Kirby lays claim to having created the phrase in 1996, and is "rather proud that it is now a generic term for a bit of trickery". It is closely related to 'the sticky bottle'.

The book was actually written by Robbie Broughton, who, according to Kirby, "corralled my thoughts and witterings into a series of chapters and I then Kirby-fied" them. Some of those chapters are a short as two pages, and "expose the rather odd bits that have accompanied me and this crazy sport". Presumably the written word has allowed Kirby to rein in the sort of things that seem to infuriate some listeners during his commentary, so I don't expect his writing to be so polarising.

You can read about the timing of 'comfort breaks', the involvement of protesters, and the challenge posed by slow days; you will also get to read a bit about his co-presenters, as they do tend to spend a lot of time together. Kirby doesn't try to get too involved in any of the controversial topics that surround cycling.

Some chapters reveal a bit more of Kirby's personal opinions. His view on the greatest ride of recent times, if not of all time? "Look no further than the Giro d'Italia on 25th May 2018 and Chris Froome's extraordinary stage victory at Bardonecchia", with his attack over Colle delle Finestre.

Kirby shares his dislike of one particular question often posed at media interviews and press conferences, which is "the laziest, most banal, unresearched bollocks question from page one of Dumb Reporting for Dummies: 'How do you feel?' ... a question excusable only for those for whom English is not a first language."

There are a few pages of colour photos, but I found more value in the lengthy captions that accompanied them. For example, under a picture titled 'This is not a bike rack' we are told that: "A digital delay is built into live transmissions, so far fewer bums make it to air: the director has about seven seconds to play with so he can select a less 'cheeky' shot. It also means riders' blushes are saved during 'comfort breaks'."

It may not be the most original concept for a book, nor the most intellectually challenging, but I think that most fans of the sport will be entertained by Magic Spanner, whether you like his commentary or not.

Easy-to-read and entertaining view of life as a commentator

Make and model: Magic Spanner The World of Cycling According to Carlton Kirby

Prepare to be entertained as legendary Eurosport cycling commentator Carlton Kirby shares his tales from the road, taking you behind the scenes of the world's greatest cycle races.

With a candid authority that comes from over 25 years commentating on the world's biggest cycling races, legendary Eurosport commentator Carlton Kirby isn't afraid to tell it like it really is. Witty, outrageous and often outspoken, Magic Spanner is an insider's view of life on cycling's Grand Tours, including the Tour de France, Giro D'Italia, Vuelta a España and the classics, all delivered in the inimitable style for which Carlton has become globally famous.

Peppered with hilarious anecdotes of life on the road with Tour legend Sean Kelly, Carlton gives us an expert, behind-the-scenes view – one that the average fan rarely gets to see or hear about. As well as sharing his various bugbears (including crazy spectators in mankinis to the more serious issues of rider safety), Carlton also lifts the lid on team strategies, and delves into some of cycling's more questionable ethics.

Delivering a mix of expert opinion and trademark wit, Carlton covers the funny, the serious and the more bizarre moments on the professional cycling caravan.

It will make you laugh.

I can't relate it back to Kirby because I don't listen to his commentary.

Entertaining and humorous: very much designed for easy-reading.