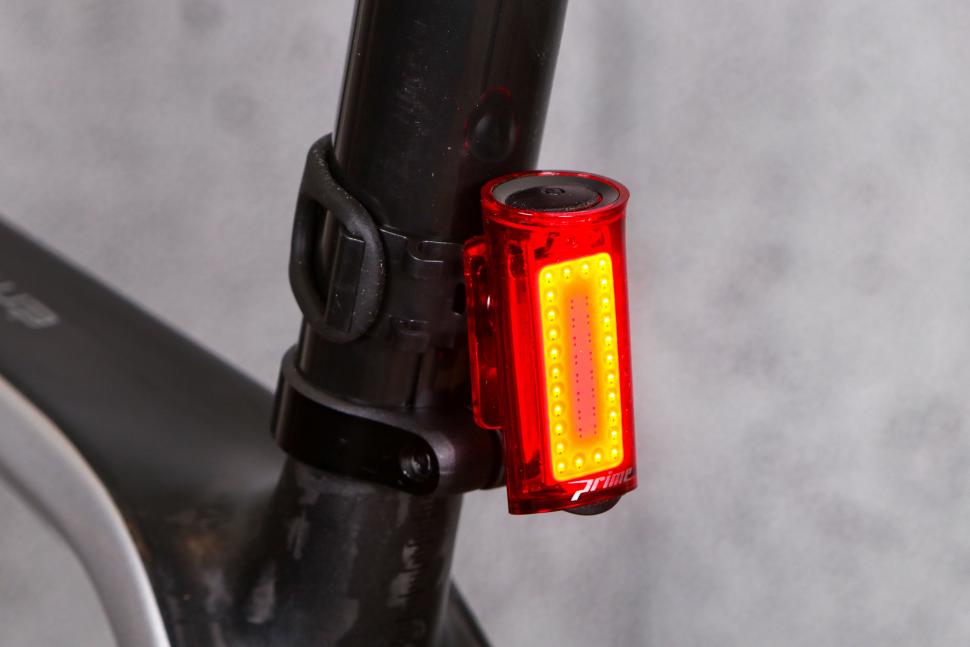 The Prime 360 Super Bright Rear Light is a capable offering at a great price. There are seven generally sensible modes, a memory function, and the light feels solid – the mounting kit less so, but still serviceable enough.

The body/lens measures a relatively bijoux 55 x 255 x 25mm, and thanks to its curved shape means the arc of light is good peripherally too.

In terms of output, there are two steady settings, high and low (40 and 10 lumens), and five flashing, from 5 lumens up to a 50-lumen daylight flash, which should cater for most scenarios.

As daylight modes go, the 50-lumen offering here is good rather than great, especially in harsh sunlight. It's much better when it's grey or overcast, when I was visible to around 100 metres (about the length of a football field) – but only about half that when the sun's been strong. I also tried it as a night mode on occasion, and other riders reckoned they'd spotted me at around 150 metres.

For dusk and beyond, flashing mode 4 is the most intense of them, and thanks to the sequencing and patterns, friendly acquaintances reckoned they could pick me out at a good 125 metres through the sticks.

> Buyer’s Guide: 10 of the best rear lights for cycling

I was astonished by how bright the two 5-lumen flashing modes proved – visible to 40-50 metres. Again, much of this comes down to the distinctive flash sequences.

Flashing 1 is overkill for town riding but good for traversing the lanes and semi-rural sections. I've had close to 9 hours from a full charge and friends suggested they could spot the beam pattern at 100 metres, maybe 125 on a clear, starry night.

I have pondered the high constant's validity, given it's only good for an hour (just under) and there's no auto 'get you home' kick-down. In fairness, I have a few costing a good bit more that don't have a bail-out.

The 10-lumen low constant would be my obvious choice for group rides. Otherwise, the flashing modes offer a decent blend of performance and economy and are quite captivating.

Run-times were in line with those cited, give or take a few minutes, providing a range from just under one hour (high constant) to 20 for the longest running of the 5-lumen flash modes.

The charge indicator isn't as obvious as some, but manifests as a distinctive, intermittent flicker that has chimed in when reserves dip to around 15%.

The lithium-ion polymer cell charges via micro-USB cable and takes two hours from the mains, another 10 minutes or so from a laptop/similar. The battery life/charge indicator glows red when charging, turning clear, rather than green, when fully fuelled.

Though not always practical, I try to keep batteries regularly charged rather than letting them get exhausted, so I get maximum life from the cells. I wasn't surprised to learn the Prime 360's lithium-polymer cell will manage 300 charge cycles before performance tails off.

It also has a memory function which, given the seven modes, is welcome.

In the pack you get both a helmet mount and a seatpost mount. The post mount feels a bit soft and not that great quality, but true to claims it will offer decent tenure to tubing between 19 and 33mm. I used it on standard round rather than aero posts. 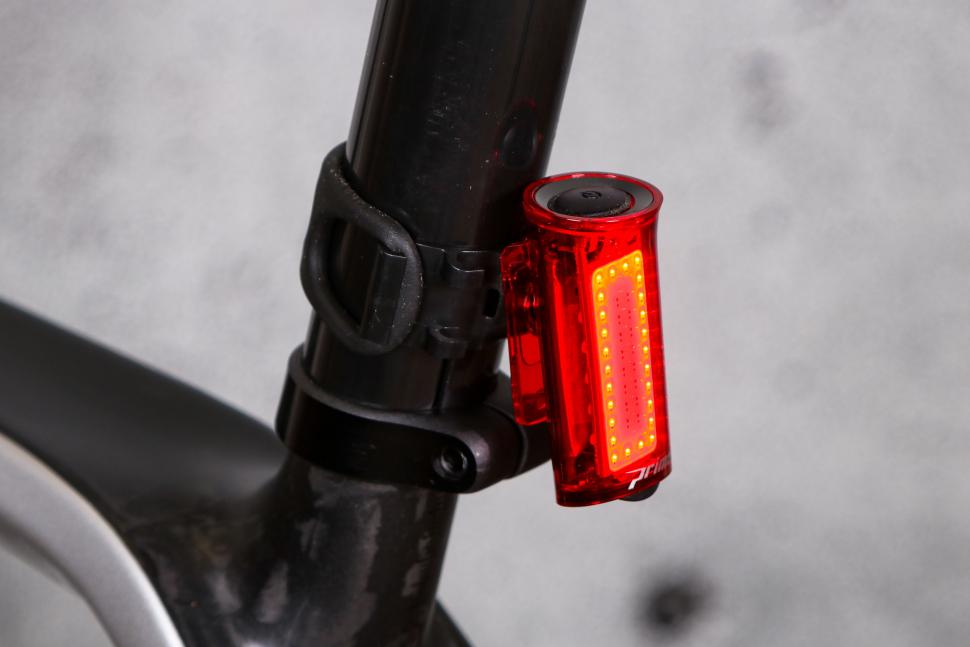 That said, I defaulted to using the light's integral clip and attaching it to assorted luggage tabs, with no issues (woven types seem the best hosts). Beefier jersey pocket tops are another viable option.

With some trial and error involving a DIY shim and cast-off rubber strap, seatstays proved secure hosts, though pencil-thin tubing were non-starters.

The light's IPX4 rating means 'resistant to water splashes from any direction'. This might not inspire the same confidence as one meeting IPX6, but it's common and good enough for road riding. The port-plug is a large, snug-fitting rubbery affair, and after being out in heavy rain and giving bikes a good clean it's never missed a beat.

I've also accidentally dropped it – only from a height of 30cm – with no signs of cosmetic or more serious damage.

A penny under £20 is cracking value for money, given the specification and overall performance. You can buy cheaper LEDs, but most can't rival the Prime's range of modes and presence.

Magicshine's Seemee 20, for example, a small cube-shaped, four-mode model, is just £17.99 but only pumps out a maximum of 20 lumens, as does ETC's remarkably similar looking Mira 20 Lumen Rear Light which comes in at £16.

Oxford's Ultratorch Slimline R50 Rear LED is another contender, though. A couple of quid cheaper at £17.99, it doesn't feature a daylight running setting but does have a 50-lumen max, and no fewer than eight modes. The rubber-band type mounting strap is a little basic, but again adequate, and easily substituted for something more substantial.

Minor grumbles aside, the Prime rear light is a great option for the money, and does the important things very well, though I'd sooner pay a couple of quid more for a beefier mount.

Prime says: "The Prime 360 Super Bright Rear Light (PSI) is a reliable and vibrant road cycle light that mounts to seat posts and helmet mounts. It also features Prime's PSI mount that offers secure mounting on the underside of your saddle. Brightness is key for daylight riding and the Prime 360 Super Bright Rear Light offers 40-lumens illumination on high-beam and 50-lumens on daytime flashing mode. With 7 modes to choose from the rider can balance the road and light conditions against the most appropriate illumination. Prime Saddle Integration (PSI) allows you to clip PSI accessories into the saddle base to allow for sleek integration."

My feelings are it's a capable light for the money that gets most things right. However, though functional, the mounting kit feels low rent.

Well made, but the mounting kit, though functional, doesn't feel as good quality.

Light is intuitive and user-friendly. The switch is more positive than some, which is a good thing. However, it requires a longer (1 second) continuous press before powering up/down.

Mounts are reliable enough but the plastics feel soft. Best mounted to the seatpost rather than seatstays, in my experience. The light's integral clip meant luggage tabs were my preferred default.

IPX4 might not inspire the same confidence as IPX6 but I've had no issues in the wet or when giving bikes a really good clean.

In line with those cited and generally very practical.

Bright and with a good balance of modes for most contexts.

Seems rugged and with no obvious weak spots. Resistant to stones and other projectiles, and the big, snug-fitting port cover is very good at keeping the elements out.

You can buy cheaper LEDs, but most can't rival the Prime's range of modes and presence.

I've been impressed by this light. Though not the most potent, the modes and flashing patterns are nuanced enough for town work and group rides, yet assertive enough for the darker roads. The lowest 5-lumen flashing settings are cases in point – not what I'd default to along the backroads but far more distinctive than their numbers would imply, and super frugal too. The daylight setting lacks the outright presence of some, especially in bright sunlight, but is still very obvious. The only minor niggle is the mounts but again, they're serviceable.

Not so keen on the mounts.

A penny under £20 is cracking value for money, given the specification and overall performance. You can buy cheaper LEDs, but most can't rival the Prime's range of modes and presence.

Magicshine's Seemee 20, for example, a small cube-shaped, four-mode model, is just £17.99 but only pumps out a maximum of 20 lumens, as does ETC's remarkably similar looking Mira 20 Lumen Rear Light which comes in at £16.

Oxford's Ultratorch Slimline R50 Rear LED is another contender, though. A couple of quid cheaper at £17.99, it doesn't feature a daylight running setting but does have a 50-lumen max, and no fewer than eight modes. The rubber-band type mounting strap is a little basic, but again adequate, and easily substituted for something more substantial.

Very good light for most riding contexts for the price, which is the reason it just scrapes an 8 overall, even though the mounting kit merits upgrading – even if that raised the price by a couple of quid.