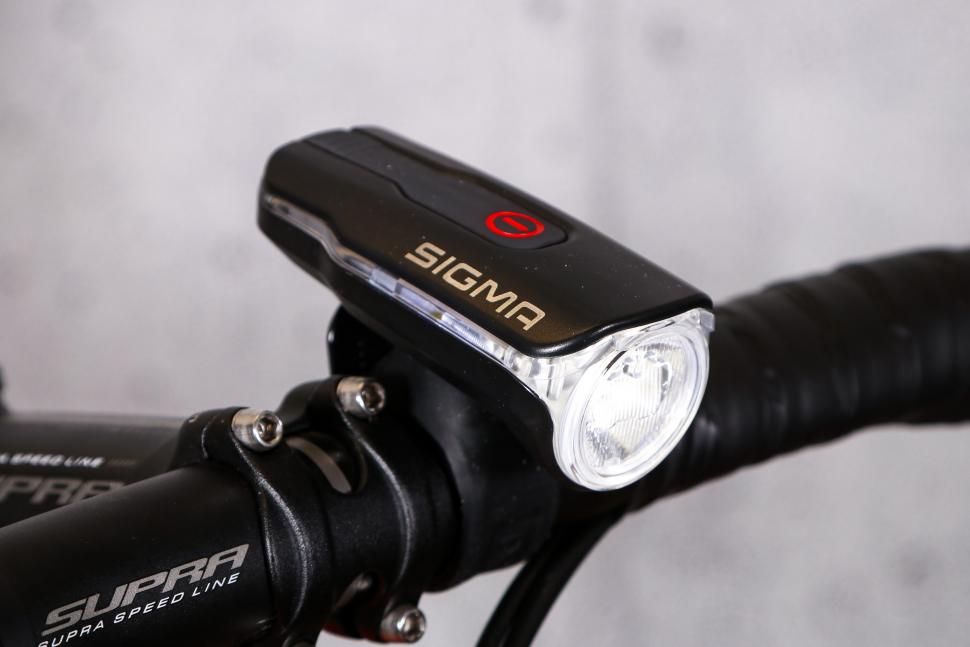 The Sigma Aura 60 Headlight is a three-mode front light, producing a maximum of 60 lux and generous run times. Its intuitive to use, the beam is good and the charge indicator is informative. Those regularly tackling long stretches of unlit roads are better served elsewhere, though.

Given the price, I wasn't surprised to find a composite body and an IPX4 rating for weatherproofing, but the composites feel solid and are unphased by the everyday carelessness. Aside from some decidedly wet rides, I've subjected ours to quick blasts from the garden hose and sudsy bucket washes with no issues.

The lens is polycarbonate and employs a collimator – a beam-narrower, basically – and has long thin side windows for peripheral illumination. It's stVZO compliant, which is very strict when it comes to beam alignment.

Technically a German market standard, stVZO stipulates that beams must be focused on the road ahead, so as not to dazzle oncoming traffic. Flashing and pulsing modes are also a no-no since these could dazzle or distract, and god knows you don't want other road users noticing you.

Behind the lens there's a single Osram LED and a rechargeable lithium-ion battery. The switch is top-mounted, dead centre, so easily spotted. The charge indicator sits just behind it: clear denotes fully charged, green means 70-30% charge, and below that it turns red.

Some folks aren't keen on the humble micro-USB charge cable, but replacements are easily found, and the Aura is designed to run longer with an external power bank plugged in. That's a nice touch, and one I'm surprised hasn't been more widely adopted (some lights will charge from a power bank, but only when switched off).

The port's silicone bung is a reassuringly snug fit. 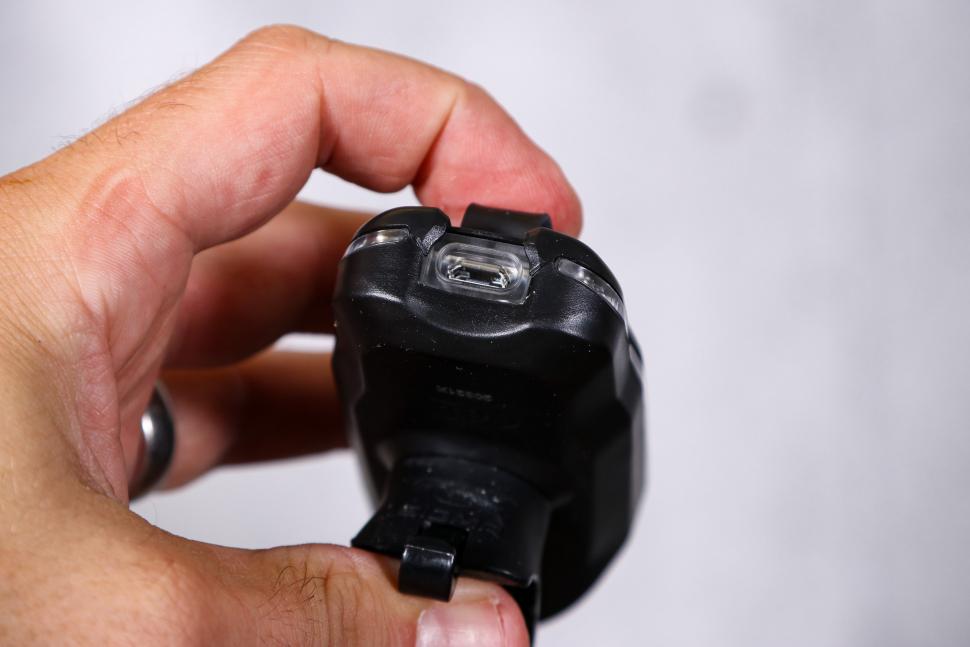 I found this took 3.5 hours to charge from a laptop, and was 15-20 minutes quicker from the mains.

This is a simple but well-designed rubber 'watch type' strap, which has been a good fit on all my fleet. I err towards curvy, slightly flared drops, which aren't always uniform diameters.

Oversized and aero sections haven't created any issues. I've needed to pull the strap very tight to achieve leach-like tenure on narrower diameters, but it hasn't caused any problems. I've also managed to tether it to some helmets.

The low-profile switch is simple to spot and requires a deliberate double-press to engage. I found it less intuitive than some, but then it subverts unwanted engagements when bouncing around a pannier, or pocket. Once on, subsequent presses move through the modes and illumination means it's easily spotted. 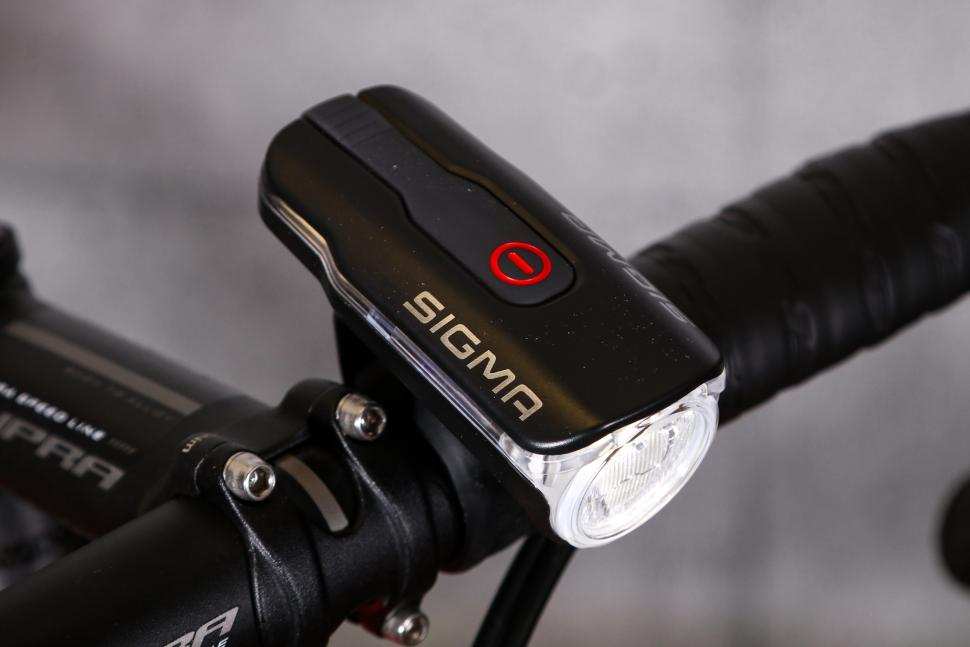 The full 60 lumens cast a reasonable spread of light across the road, but the beam pattern is a little too subdued for letting rip along country roads. Along pitch-black lanes, I found 14-16mph was tops.

Illumination to the sides is also a little stunted, meaning it was trickier to spot red deer and similar woodland creatures leaping into my path.

Performance is much better in semi-rural and suburban contexts, and there's sufficient punch for 20mph-odd. Through built-up areas, 60 lumens is overkill but that beam pattern is very assertive, rather than aggressive, so I've left it when negotiating bigger roundabouts, especially at dusk.

Sigma reckons four hours from a full charge. I've come within a few minutes. Otherwise, in the interests of economy the 30 lux medium has been my setting of choice for tackling suburban and built-up areas. I've had 6hrs 56m from a full charge, four minutes shy of the seven hours quoted but close enough for all but the most pedantic.

Given much of my riding is along the sweeping back doubles requiring a high-power main light, I was keen to see how it would fare as a secondary, helmet-mounted light. I was pleasantly surprised, particularly in the high and medium settings. The long side windows provide some additional illumination, useful when passing unlit junctions, entering the flow of traffic.

The 18 lux Eco mode is a bit tame but adequate for being seen around town, scooting along shared paths and – when helmet-mounted – useful enough for roadside inspection and repair. Again, run time was within a few minutes of claimed (in this case, 10 hours).

There are several very capable front lights at this end of the market which might trump the Aura 60, especially if you're doing any distance on unlit roads. The Ravemen LR800P is also £49.99, offers four modes, a maximum of 800 lumens and can also be topped up on the fly with a power bank.

Provided you're not straying too far from the suburbs, the Sigma Aura 60 has a nice blend of power and economy. However, there are better options at this price for letting off steam along the backroads.

Practical and long-lasting headlight for general riding, but not the best for unlit roads

Sigma says, "The sporty AURA 60 USB features 60 lux LED technology and, with a light range of 70 meters, ensures excellent illumination of pathways and roads. The Light Guide on the longitudinal sides also increases the lateral visibility of the rider.

"The AURA 60 USB is therefore ideal for commuters and demanding riders."

It's a reasonable light, but beam pattern means its limited once beyond the suburbs.

* Splash resistant in accordance with IPX4

* Light Guide for excellent side visibility

Feels sturdy and the port cover is a precise fit, keeping water and grit at bay.

Very simple to operate, even in gloves.

IPX4 is at the lower end of the weatherproof scale, but I've had no issues, even in heavy rain and when subjecting it to the garden hose.

Long charge time is mitigated by reasonable run times and the option of plugging in a power bank.

102g is unobtrusive when fitted atop a helmet.

By no means poor, but there are several competitors offering better output for less.

It's a reasonable light with decent run times. Output is very good for town and suburbs.

It's simple and unobtrusive, has a good beam and output for built-up areas, and reasonable run times.

Decent enough light that largely does what it promises in the blurb. The beam pattern means it's best suited to (lit) towns and suburbs, though it can just about deal with pitch dark lanes too, if you take it slow. The only thing really holding it back is it's priced the same as similar yet more powerful lights.