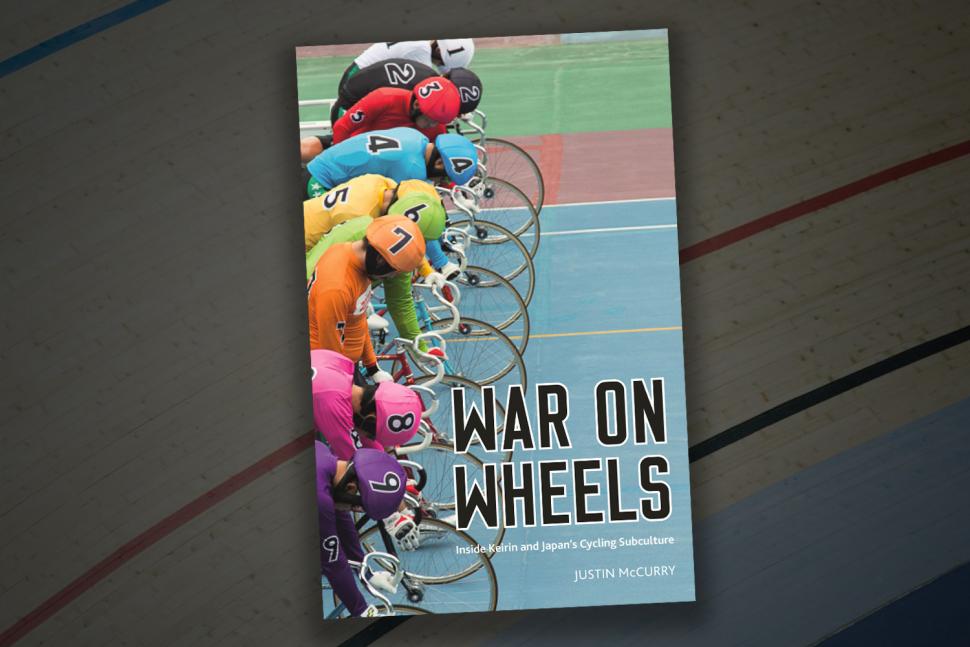 2021War on Wheels by Justin McCurry

War on Wheels by Justin McCurry

9
10
An engagingly written in-depth explanation of keirin, showing why the version you normally see is a pastiche
Engagingly written
Reveals a little-known side of Japan and cycling
Would benefit from more pictures
Weight:
445g
Contact:
profilebooks.com
How we test

With the close association between keirin and Japan, and the Olympic Games taking place in Tokyo this year, what better time to find out more about the race? War on Wheels may be about keirin, but not as we know it: the version we see on the world stage doesn't do justice to the sport as practised in Japan. It's a far more interesting story than you might expect, often in surprising ways.

One thing you learn early on from the author, Justin McCurry, the Guardian's Japan and Korea correspondent, is 'that Japanese keirin and its UCI counterpart have little in common besides their name'.

If you want to know about the rules of keirin for the Olympic Games or World Championships, then this book can certainly help you. However, to really appreciate the discipline you have to understand more about Japanese society, and its impact on so much of the sport – which is what this book also explains rather well.

I learn that a lot of the keirin experience could be summarised into a few words: gambling, rules, and tradition. And even more gambling.

The Japanese don't like to encourage betting, but the funds it raised at keirin races were invaluable in rebuilding the country's post-war economy. As a result, explains McCurry, 'keirin is not simply a sport; it is a communal act of state-sanctioned philanthropy, with its origins in the darkest days of Japan's modern history.'

It was the requirements of gambling that led to the use of a pacer, 'to ensure that the element of unpredictability was automatically built in to every keirin race…making betting a viable proposition.' UCI keirin keeps the pacer, if not the original reason for having one.

There's another thing that the UCI didn't adopt: in Japanese keirin, 'to avoid races descending into a simple sprint for the finish line as soon as the pacer's duties are done, riders must observe rules governing the timing of their final assault.' Each rider has a specific and pre-determined role, and that role dictates when they are allowed to start sprinting.

If the UCI were to introduce that rule it would make the viewing experience even harder to fathom for the average spectator, already baffled by the presence of a small motorbike on the track.

Tradition makes sure that 'keirin bikes are as far from cutting-edge as it's possible to imagine' – carbon fibre frames are occasionally wheeled out for the benefit of a world audience, but normally it's steel all the way – built to a narrowly defined specification.

It's a similar story for the components (including the toeclips and straps), where each of them has to be approved and stamped with 'NJS, or Nihon Jitensha Shinkokai, the forerunner of the present-day Japan Keirin Association'. Despite what some fixie riders might think, it is not a mark of superior quality, but rather is designed to ensure a level playing field, so that performance is down to the riders alone. It makes the UCI's rules on trying to limit any advantage from equipment seem half-hearted.

War on Wheels is described as 'the only full length book on keirin in English', but, as McCurry discovered, the situation is not much better in Japan, where he 'found evidence that keirin is a sport many Japanese would like to pretend doesn't exist'. He found there were only two books on offer 'at a cavernous book shop in central Osaka', and both were shelved in the section on gambling, not sport.

He fears that traditional keirin is 'facing an existential crisis', for reasons that range from a reluctance to break from tradition, to the male domination of both riders and gamblers, declining attendance and its associated betting – and more.

I tracked down one other book, from 1996, called Keirin by Kai-K Sawabe and Bertram Job. It's short, at 114 pages, with the main language of German accompanied by an English translation, but the majority of the pages feature large colourful images, many of them doing a good job of illustrating the regime and conditions that McCurry describes. War on Wheels, by contrast, has a scant eight pages of pictures, and in my view would have benefited from a few more. Keirin can lend itself to some stunning shots, as Keirin shows.

I had never been able to fathom the appeal of keirin – but that was based on watching the wrong sort. The more I learned about 'proper' keirin, the greater the respect I have for it, and I hope these games will lead to a greater interest in the home version from those watching overseas. For anyone who is interested, this book is perfectly timed and pitched to explain all.

An engagingly written in-depth explanation of keirin, showing why the version you normally see is a pastiche

Make and model: War on Wheels by Justin McCurry

The Olympic cycling sport of keirin was invented in Japan more than 70 years ago to raise money to rebuild the country after World War II. Now, fans bet billions of dollars a year on races, with the top riders earning huge sums.

In each race, a pacemaker leads nine riders around huge concrete velodromes, then leaves the track with around a lap and a half to go - the cue for a frantic finish as the competitors reach speeds of up to 70 kph. Along the way they block and shove each other, clash heads and occasionally crash (the two Japanese characters used to write keirin mean 'battle' and 'wheel'). To prevent race fixing, the cyclists spend meets living in dorms, with no access to online technology. Their lives are ruled by ritual and fierce competition, from their rookie days at the Japan Keirin School near Mount Fuji to the annual Grand Prix final, whose winner takes home prize money of almost one million dollars.

A small number of foreign riders are invited to compete in Japan every year and some, like Shane Perkins, have overcome culture shock to prosper in the home of keirin. The Olympic version - which has made stars of Chris Hoy, Jason Kenny and Victoria Pendleton - is being taken more seriously in Japan as Tokyo prepares to host the 2021 Olympics and Paralympics.

It's an unexpectedly interesting story.

The missed opportunity with pictures.

It's a thorough analysis of a topical race, written in an engaging style, making for an enjoyable read.