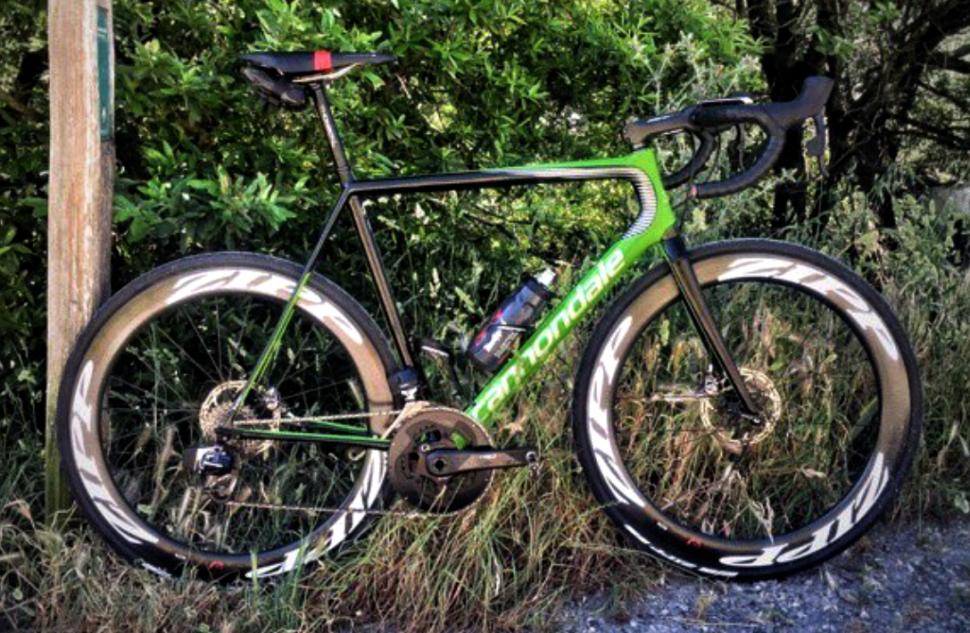 Manufacturers use professional racers extensively to test new bikes and products, so you can usually rely on some of them accidentally sharing photos of the latest equipment on social media to get the first glimpse at next year’s release. Former professional Ted King shared this photo of the upcoming Cannondale SuperSix Evo, which provides our first glimpse at the new bike.

We know the Cannondale SuperSix Evo is coming. It’s right there on the UCI’s list of approved frames, but you don’t need to be an expert to guess that most of the current WorldTour race bikes are going to be available with disc brakes sooner or later, with the disc brake trial since reinforced following a short halt in its proceedings following that incidence in Paris-Roubaix.

The photo of the new SuperSix Evo Disc has since been taken down from Ted King’s Twitter account, no doubt a quick phone call from Cannondale HQ to get it removed. Unfortunately, we can’t really tell much from the photo, other than it is fitted with a SRAM disc groupset, which looks like the rumoured eTAP Disc groupset that is surely coming soon. It was also spotted on the photo of the Canyon Aeroad Disc we reported on recently.

There are some clear similarities with the current Evo. The shape of the top tube at the seat tube junction looks the same, as do the skinny seat stays and the tapered head tube. What we’d like to know, and we can’t tell from this photo, is if the bike is using quick release or thru-axles.

Cannondale isn’t new to disc brakes on road bikes, and has been offering a disc version of its aluminium road bike for some years, most recently with the heavily updated CAAD12 Disc. You could say that bike gives us an indication of the decisions Cannondale has made for the Evo, and if that’s the case, the Evo will have quick release axles like the CAAD12. But we suspect, given the company’s history of innovation, it’ll be thru-axles. And wouldn’t it be interesting if it came out with a similar system to the Rapid Axle Technology (RAT) developed by Germain firm Focus?

Another question remains over the necessary geometry changes to account for the wider rear axle and the longer chainstays needed to avoid chain line issues. The current Evo has short 405mm chainstays so Cannondale has presumably stretched them out, or come up with a novel solution like Specialized (with its dedicated rear wheel and dropouts) or Cervelo with its R3 Disc and a modified chainset. We won’t know until Cannondale decides to launch the new bike, which we’d hazard a guess at being sometime around the Tour de France.

We're not sure about the paint job, though. Normally Cannondale paints prototype bikes in its customary green, but we guess this is a special finish for Ted King. A bit like the photo posted by Cannondale pro racer Phil Gaimon in an elevator recently...

Glad I have an elevator to my apartment, but the damn thing never lies about how ruined I am from the ride. pic.twitter.com/ATfoSK7N3S

1
Police officer caught on camera telling cyclists to ride in single file to be given "education around traffic offences"
2
Footage of cyclist's encounter with mountain goat "on steroids" goes viral
3
Driver "used bus as a weapon" against cyclist, loses appeal over sacking
4
"I've killed one of you guys before": close pass driver who left cyclist fearing for his life gets police caution
5
“If I assaulted children, I’d be locked up”: Father of teenage girls involved in Mathieu van der Poel hotel incident slams Dutch star’s fine
6
Twin brothers accused of murdering charity cyclist after hitting him with car while drunk
7
Mark Beaumont's North Coast 500 record-breaking bike and equipment
8
“Everyday tasks have become my new challenge”: Christina Mackenzie in “excruciating pain” after being struck by hit-and-run motorist