The latest bike to arrive for review here at road.cc is the Bianchi Intenso Disc, a £2,500 endurance racing bike that’s built up with a Shimano 105 groupset and Shimano’s BR-RS505 hydraulic disc brakes. 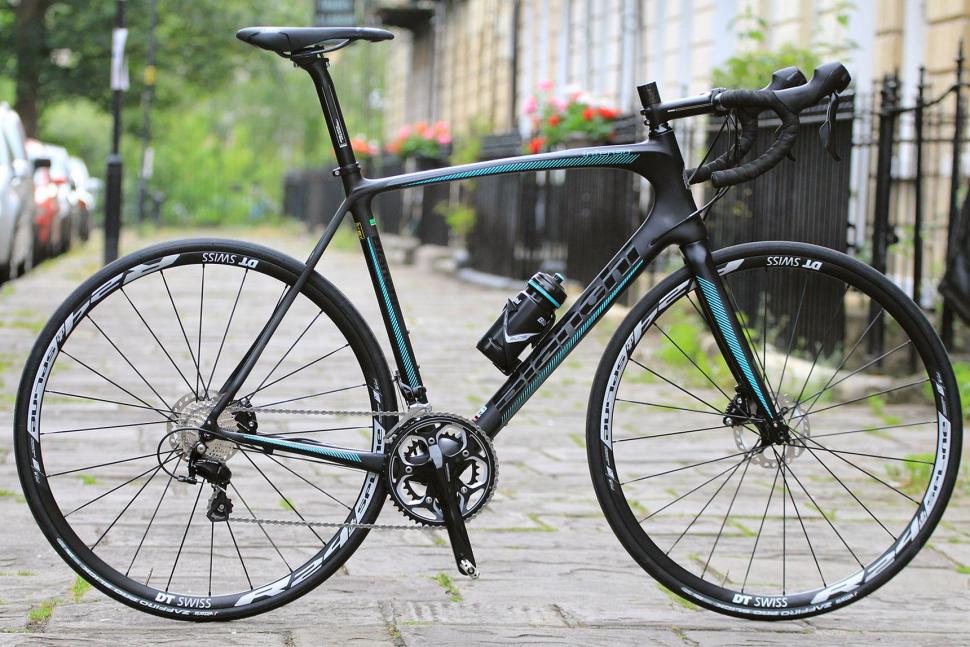 The Intenso sits beneath the Infinito in Bianchi’s endurance range. The biggest difference is that these days all the Infinito bikes come with Countervail (CV) technology. That means that a layer of viscoelastic material is included within the carbon-fibre in certain sections of the frame to cancel vibration, the idea being to reduce fatigue and improve control/handling. 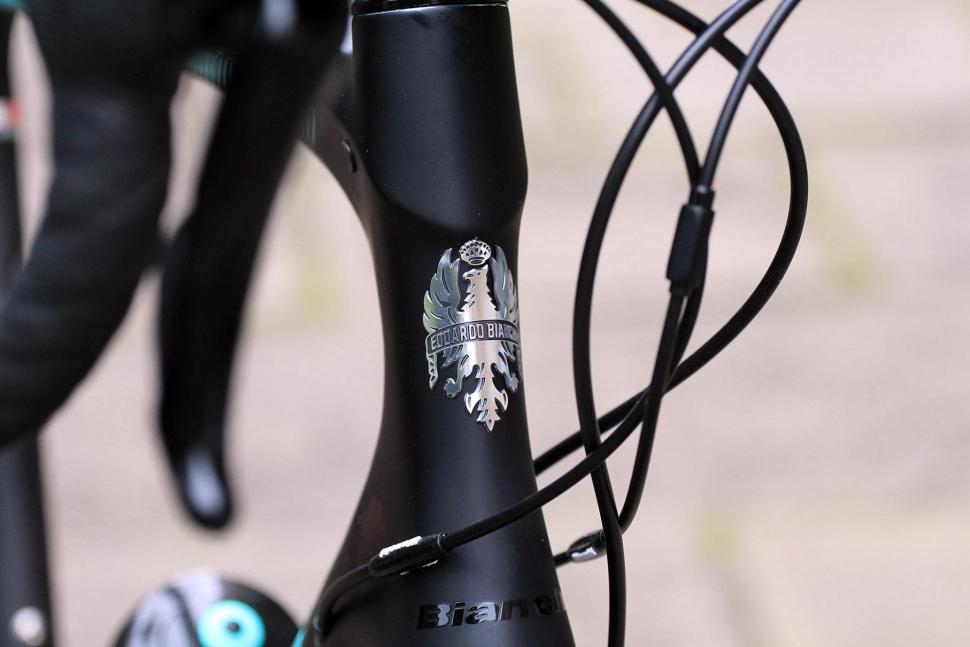 The trouble is that Countervail, which comes from the US Material Sciences Corporation, ain’t cheap so Bianchi isn’t able to spec it on every bike, hence the existence of the Intenso lineup. 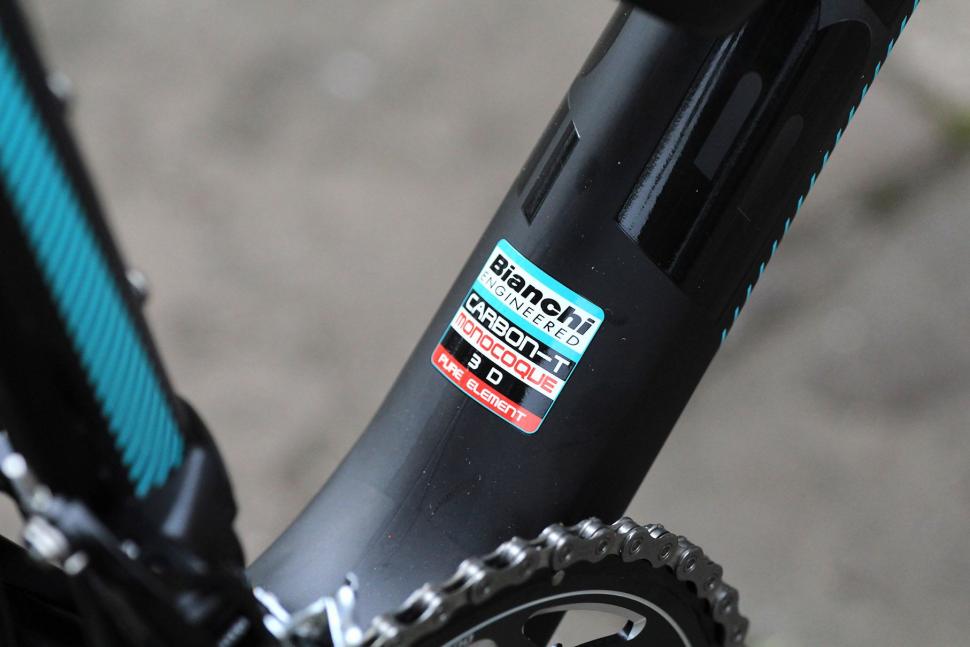 There are six different Intensos ranging from a Campagnolo Veloce model (£1,600) up to one with a Shimano Ultegra Di2 (£3,100) groupset. This, though, is the only disc brake model, new in the range for 2016. 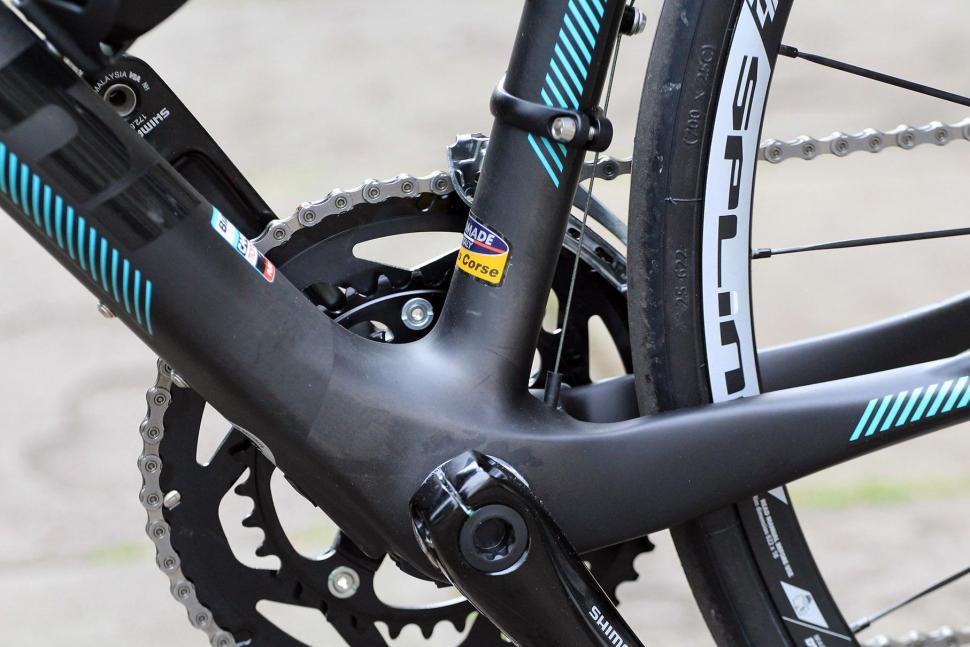 The Intenso is a carbon-fibre monocoque built with a tapered head tube (1 1/8in upper bearing, 1 1/2in lower bearing), like so many other performance-orientated bikes, designed to offer front-end stiffness. Most bikes of a similar ilk feature press-fit bottom brackets but the Intenso has a screw-in BSA BB. That might please some people, especially anyone who’s had to endure a creaking press-fit BB in the past. 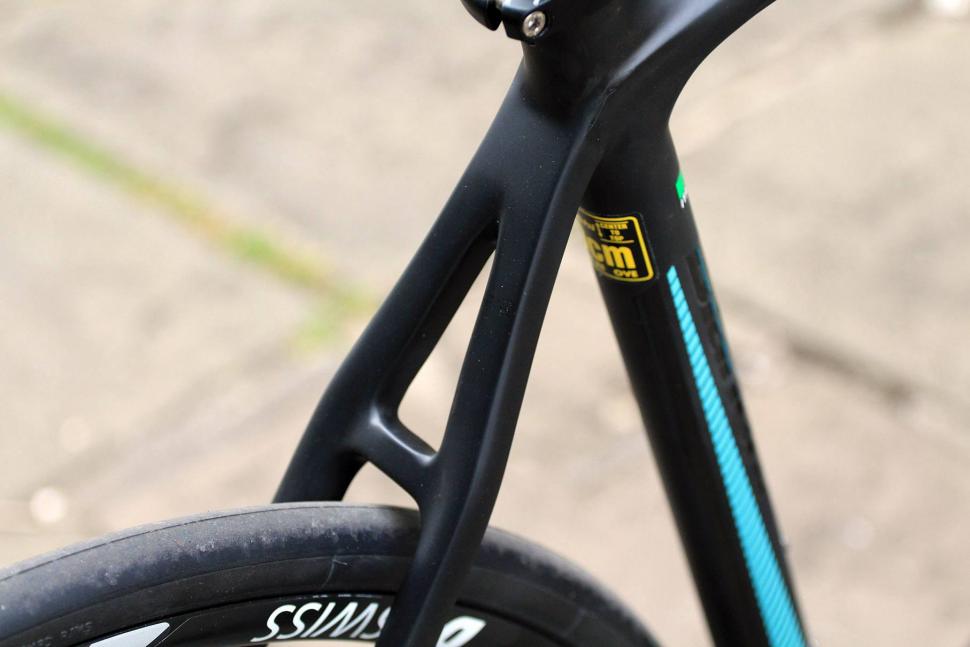 Rather than the CV technology that I mentioned above, the Intenso features what Bianchi calls BAT - K-VID tech. Breaking that down, BAT stands for Bianchi Active Technology and K-VID is short for Kevlar Vibration Isoloating Device. The idea is that the shaping of the fork and the snaking rear triangle, along with Kevlar inserts in those areas, provide improved shock absorption and adherence to the road. 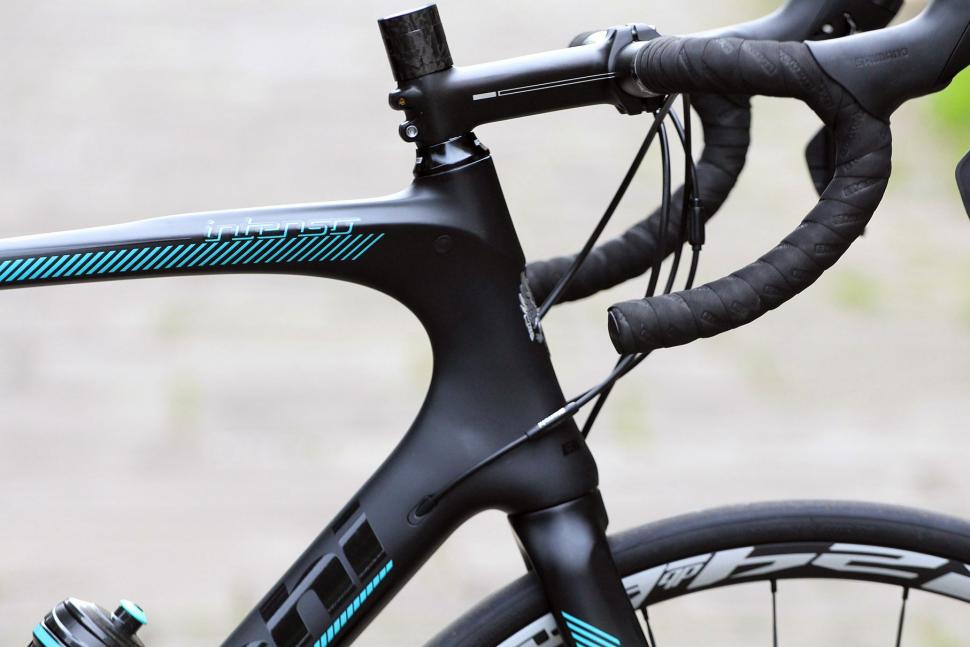 We have the 59cm bike here with a 560mm seat tube (foreshortened by a sloping top tube), a 575mm effective top tube, and a 200mm head tube. The stack height (the vertical distance from the centre of the bottom bracket to the top of the head tube) is 598mm and the reach (the horizontal distance between those two points) is 391mm. That’s exactly the same geometry as you get with Bianchi’s Infinito CV bikes – both the rim brake and the disc brake versions.

Check out our Bianchi Infinito CV review from a previous year here. 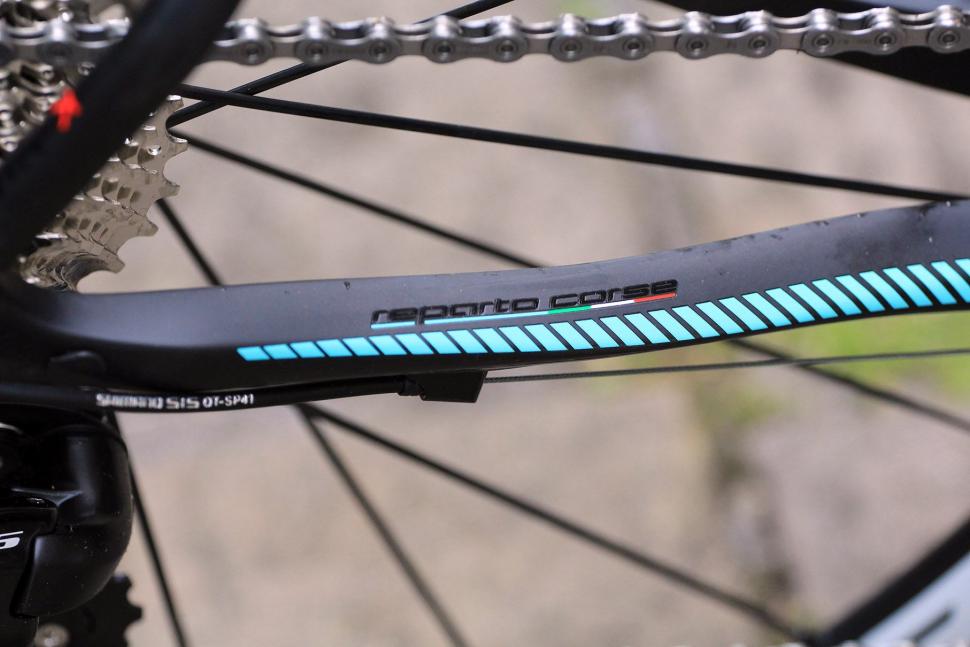 If those figures don’t mean much to you, the Intenso is going to offer a more upright position than Bianchi’s Oltre road race bikes, for example. The 59cm Oltre has the same length top tube but a head tube that, at 180mm, is 20mm shorter than the Intenso’s. The Intenso’s stack height is 18mm higher and the reach is 6mm shorter. 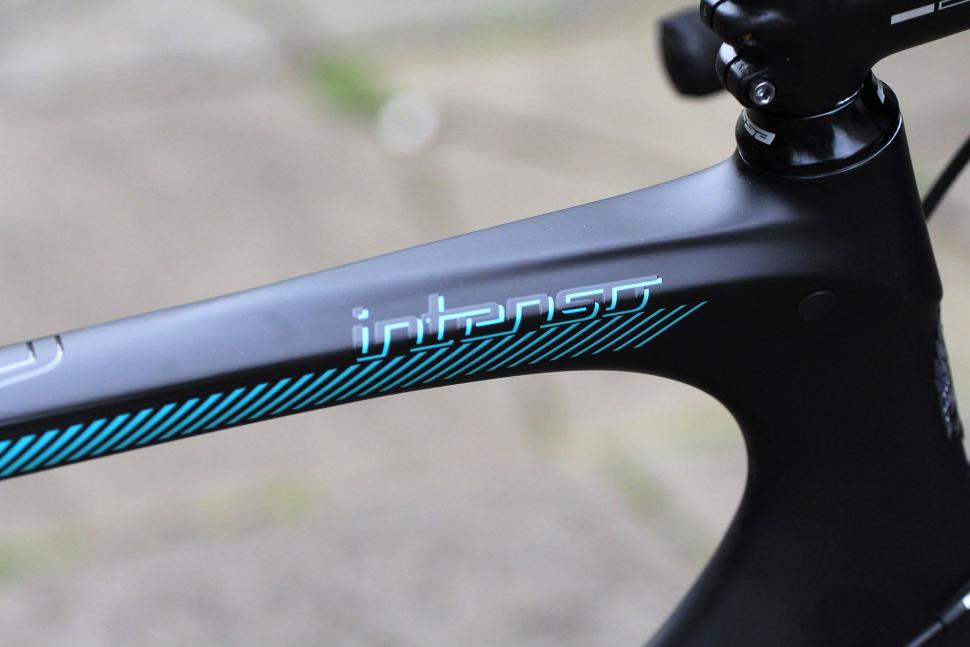 That said, it’s not a geometry that’s going to put you in a position as upright as some endurance road bikes out there. Italian brands (and this is a gross generalisation, admittedly) tend to be quite conservative in this department, relaxing everything just a touch while keeping one eye on efficiency. Perhaps it’s down to all that racing heritage. Bianchi does bill the Infinito as an ‘Endurance Racing’ bike, after all.

Check out our review of the Bianchi Oltre XR1 Veloce from last year. 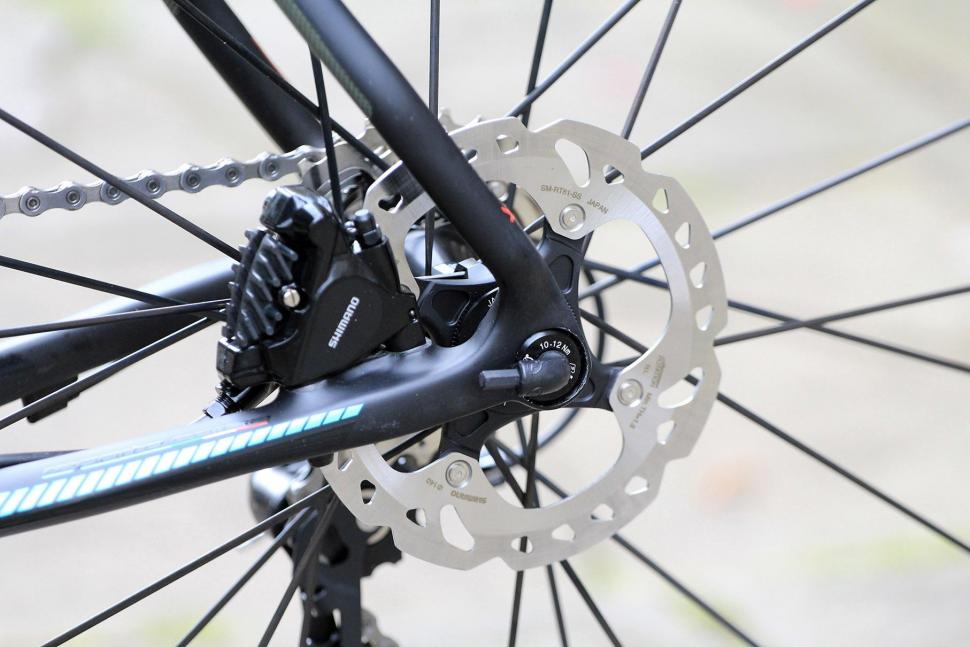 The Intenso’s disc brakes are Shimano flat mount standard, this having become dominant, and Bianchi uses 12mm x 100mm (front) and 130mm (rear) thru axles. They’re not quick-release, as such. Not quite. You get a single hex key that slots in place in one of the axles, which you can pull out when you need to remove a wheel. I don’t think you need to be concerned that the hex key will go walkabout because it sits in there very firmly. I could be wrong, but I just can’t imagine it rattling either; it’s a very tight fit. 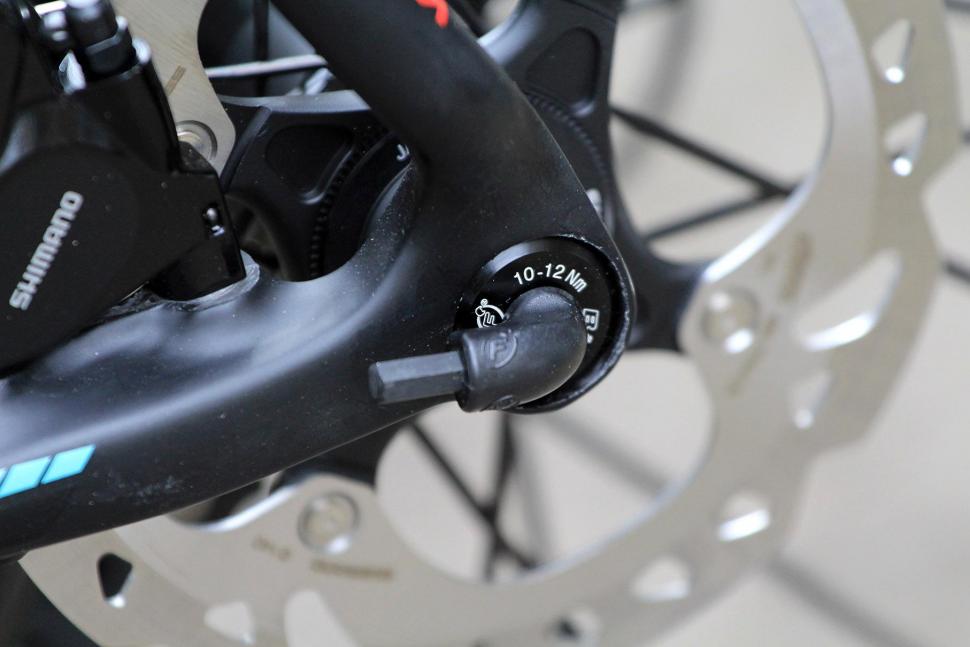 As mentioned, the Intenso Disc is available in just one option so your choice is pretty simple: a) Buy it. b) Don’t. 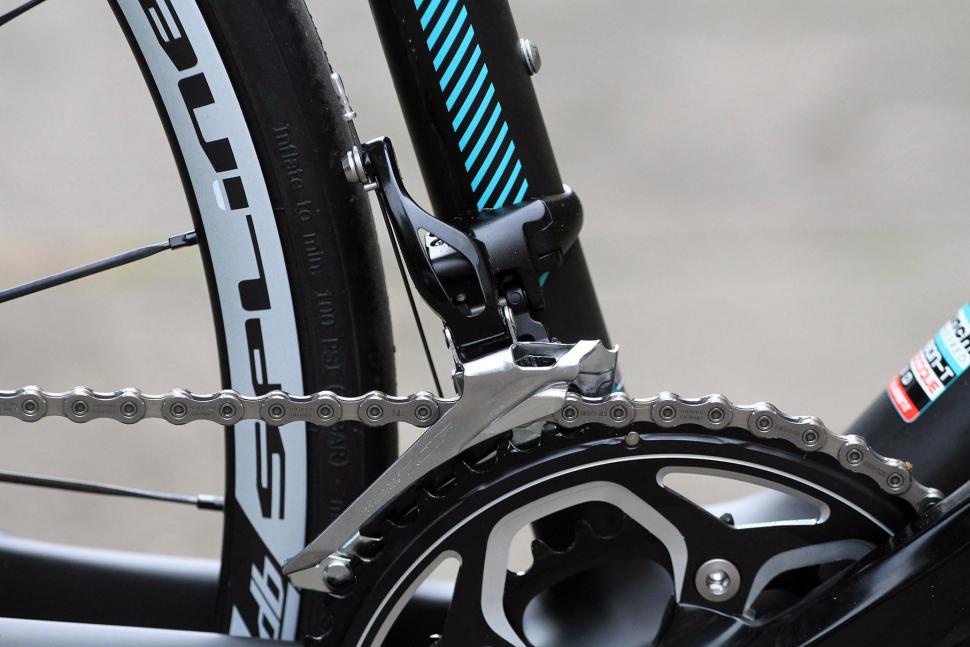 It’s a Shimano 105 build, 105 being Shimano’s mid-level road choice. Well, the derailleurs are both 105 while the shifters and hydraulic disc brakes are RS505. These don’t officially belong to the 105 groupset but they’re 105 level. The chainset is a downgrade to Shimano RS500, though.

Check out our review of the Shimano RS505 hydraulic disc brakes here. 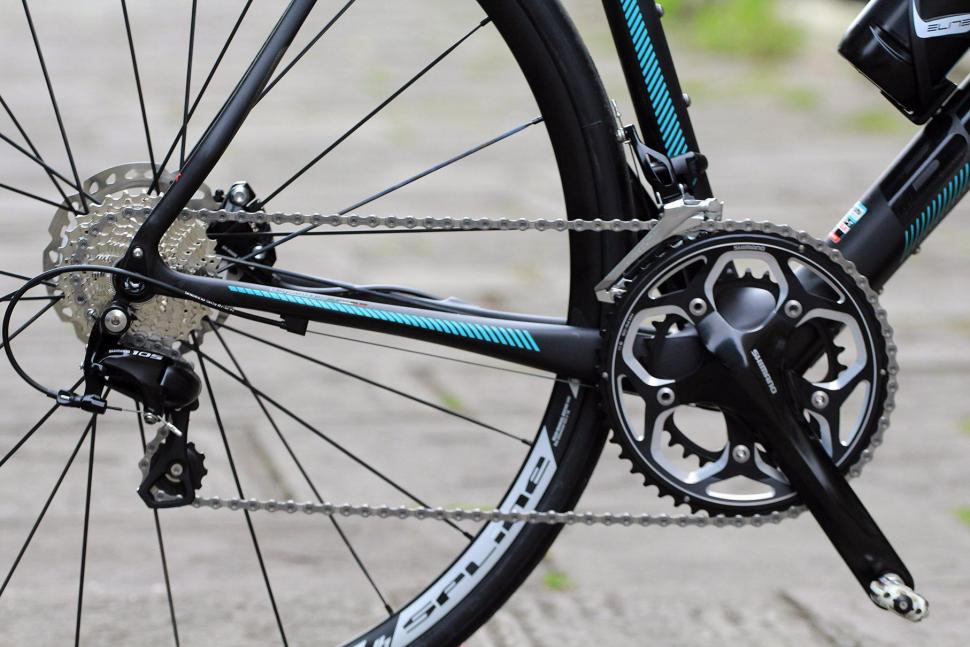 That chainset is a compact (50-tooth and 34-tooth chainrings) matched up to an 11-28-tooth cassette. Gearing is always going to be a matter of personal preference but a set-up like that will probably suit most people on most terrains. There’s a chance that you might yearn for something a little smaller, perhaps, depending on your fitness and the roads you ride. 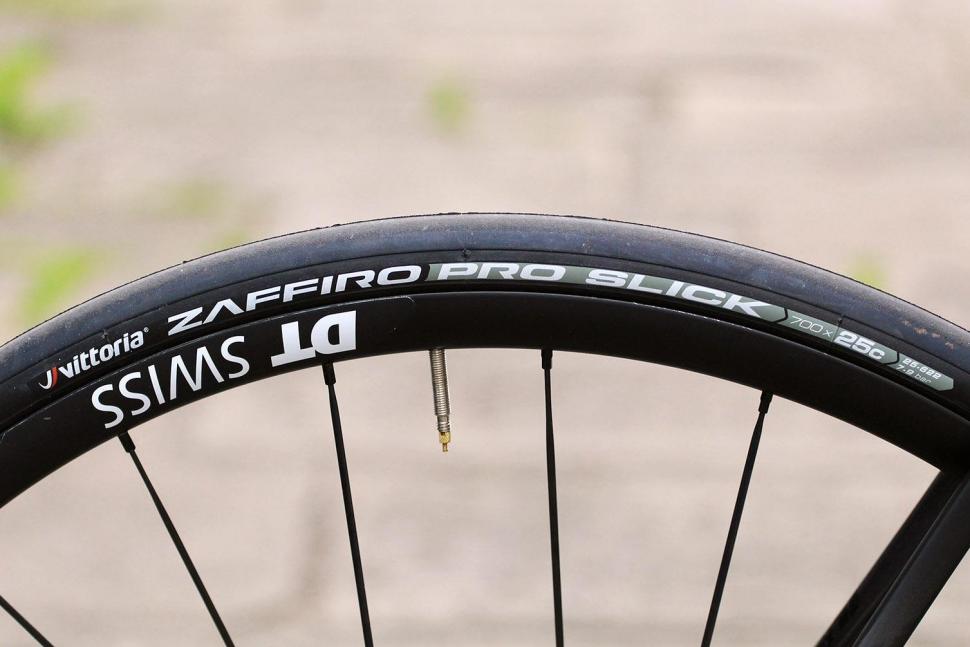 The wheels are DT Swiss R24 Spline while the tyres are Vittoria Zaffiro Pro Slicks in a 25mm width – 25mm being the new black. Not so new anymore, come to think of it. 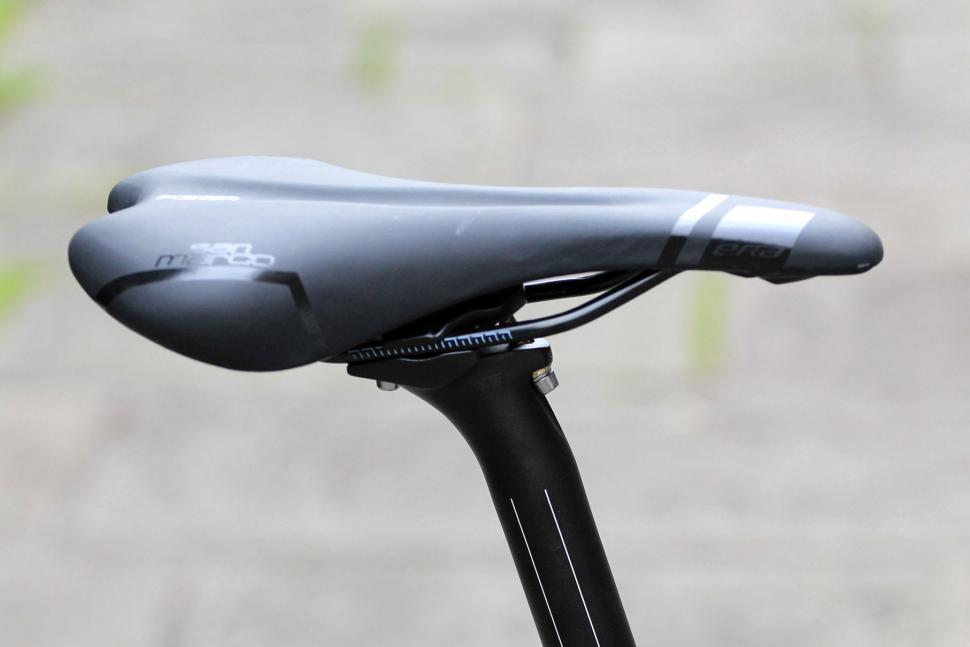 The seatpost, handlebar and stem are all 6061 aluminium from Bianchi’s Reparto Course in-house range, and the saddle is a Selle San Marco Era Startup Power with steel rails. 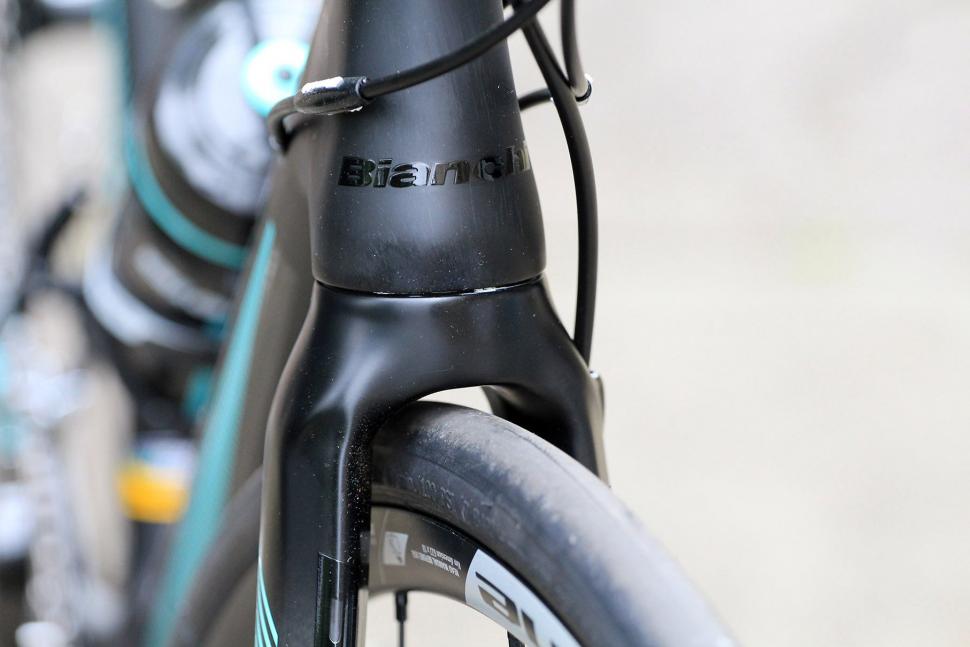 The Cannondale CAAD12 Disc Dura-Ace that we reviewed earlier in the year is the same price as the Bianchi although it’s a very different bike. Obviously, it features a Dura-Ace groupset, which is top of the tree as far as Shimano is concerned, and the frame is aluminium rather than carbon-fibre. That’s unusual for a bike of this price but don’t let it put you off. We reckon the CAAD 12 Disc is one of the best-riding aluminium frames money can buy. 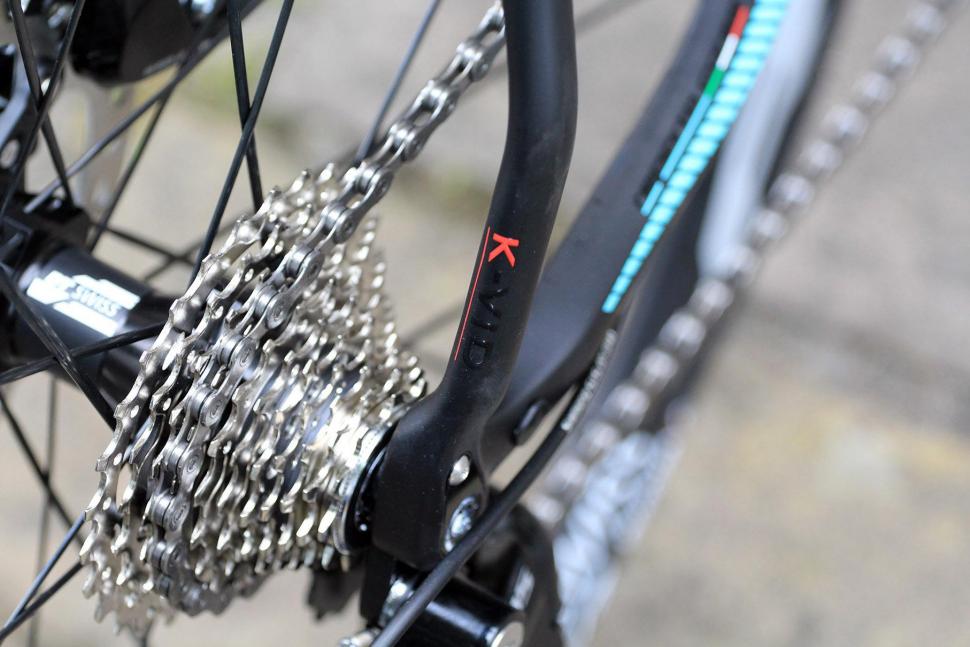 The Wilier GTR Team Disc we reviewed is a couple of hundred pounds more expensive at £2,699. That’s a carbon-fibre bike but with a Shimano Ultegra groupset, one up from the Bianchi’s 105. It has the same DT Swiss wheels. As with the Intenso, the geometry is a little more relaxed than that of a race bike without being ridiculously upright.

We said: “The Wilier GTR Team Disc Ultegra is a quick and smooth endurance bike that offers the assured performance of Shimano's hydraulic disc brakes.” 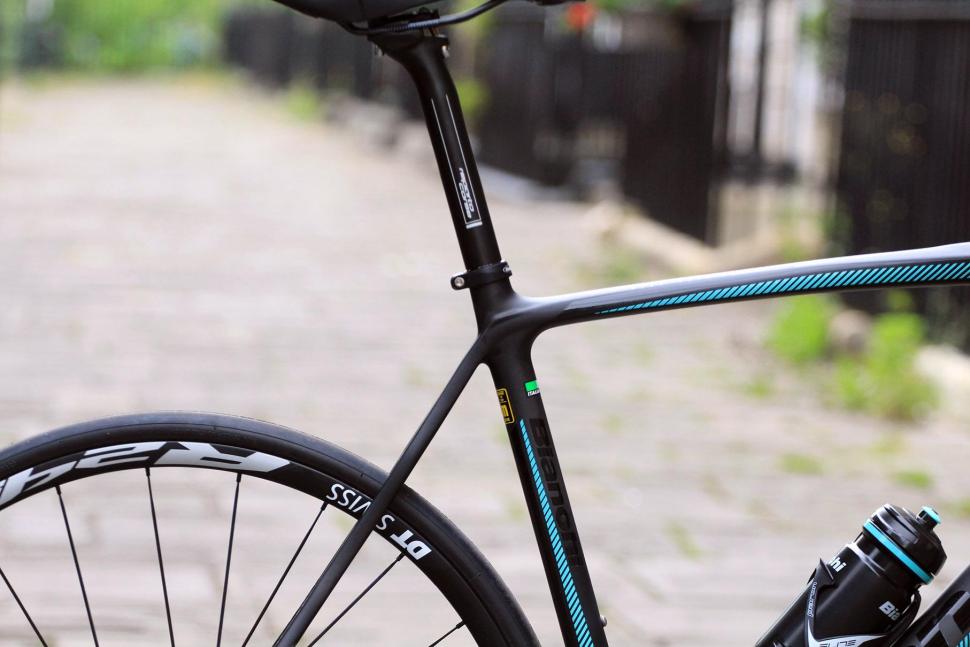 Right, that’s yer lot for now. I’m going to get some riding kit on and get out there. We’ll have a review on road.cc soon.