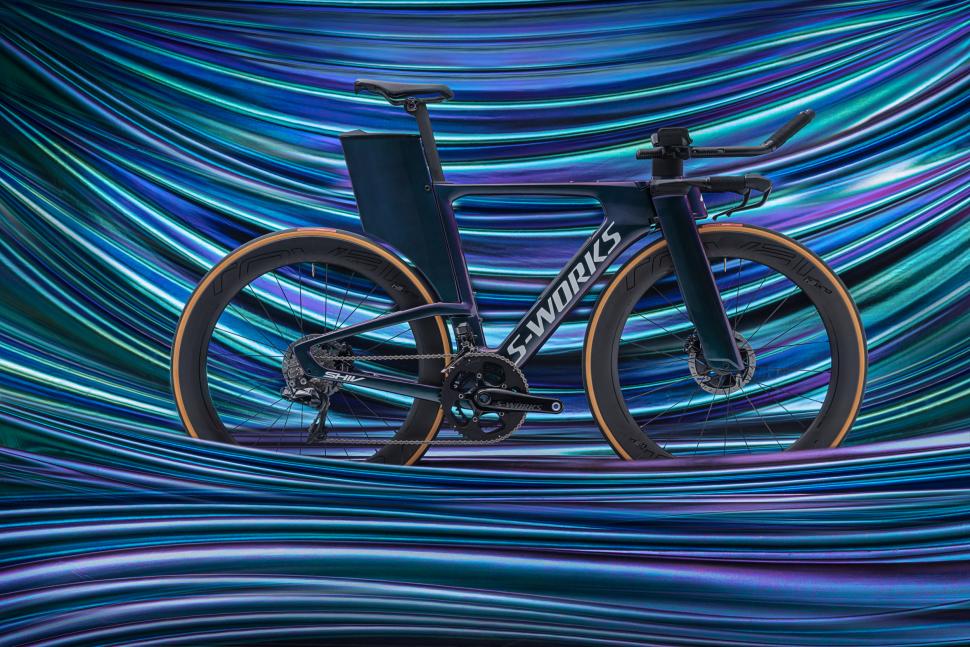 In the build-up to the 40th edition Ironman Triathlon World Championships at the weekend, plenty of eye-catching new bikes were launched - and pretty much all of them with disc brakes...
by Jack Sexty

With the world's first functional disc brake-equipped triathlon bike only launching two years ago (the Parlee TTIR), tri bikes for all their UCI-averse innovations have been pretty slow to adopt disc brakes.

That started to change last year, and this weekend it appears the triathlon world is moving to disc at the same rate as the bikes of the pro peloton, with all the major bikes launched at the Ironman World Championships in Kona being disc-equipped. Here's a quick round-up of the best of the bunch, with a few words from Steve Dunn of Quintana Roo on why tri bikes are finally starting to come dressed with discs... 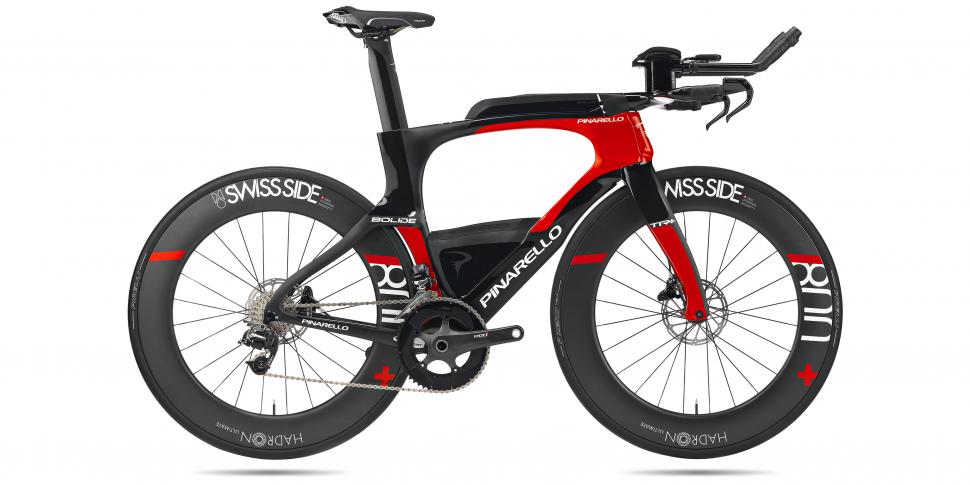 This is Pinarello's first tri bike, and former pro cyclist Cameron Wurf didn't do its reputation any harm at the weekend when he rode the 112 mile (180km) Kona bike leg in 4:09:06, smashing the bike course record. Pinarello say the storage boxes actually lead to an aerodynamic improvement compared to the time trial version of the Bolide as rode by Chris Froome et al, and the TR+ has spent plenty of time in the wind tunnel to refine aerodynamics. The geometry has been tweaked for tri, with a 35mm increase in the headtube to improve ergonomics and an 8mm lowering of the bottom bracket to make for better stability. If you want the top-of-the-range version with Shimano Dura-Ace Di2, it will set you back £11,000. 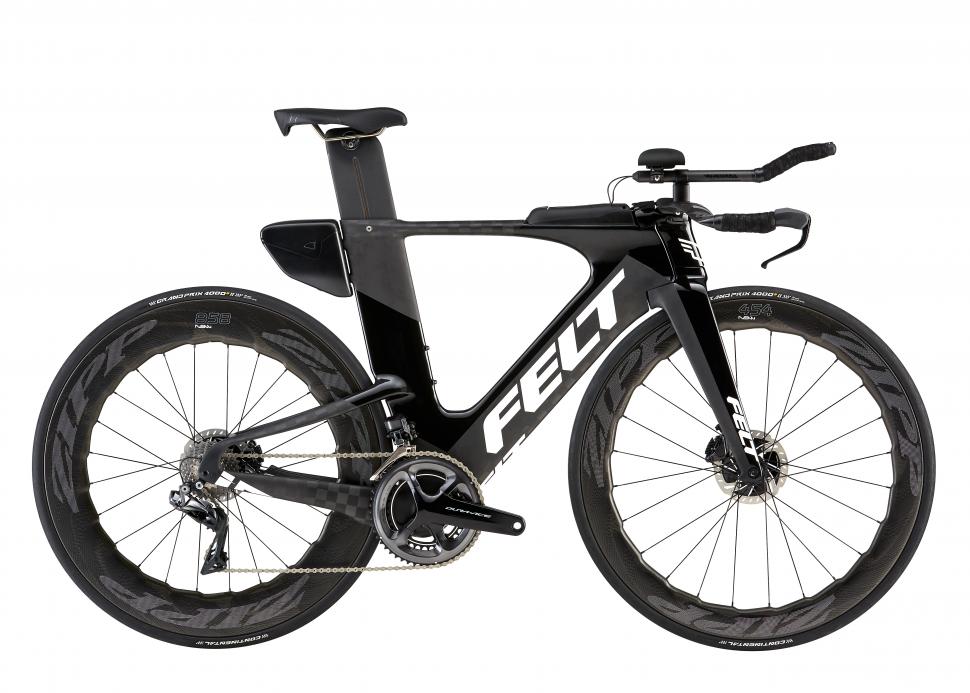 Another bike that smashed a Kona course record, with Swiss superstar Daniela Ryf riding it to a 4:26:07 split on her way to an overall victory. The IA has a redesigned carbon chassis to accommodate the disc brakes, and they say offers greater aerodynamic efficiency, storage versatility and fit adaptability than its predecessor. Felt also say the ride quality has improved, and all their top pro athletes in Kona were convinced enough to race on the new bike. We don't have UK pricing yet, but in USD full bikes start from $5,799 and going up to $15,749 for the premium build.       ​ This bike cause many of us to gasp (not all in a good way) when it was launched last week, but despite the divisive looks the totally revamped Shiv Disc did the second-place female finisher in Kona Lucy Charles no harm at all, also taking the second-fastest bike split of the day. This is the first new Shiv since 2011, and with disc brakes and that crazy huge 1.5 litre 'Fuelcell' at the rear it's had a radical overhaul. other highlights include a down tube storage box that can hold up to 12 gels, with further space behind it for flat repair kit, and a collapsable integrated front end which makes travelling with the bike easier. Want it? That'll be £10,999, available to pre-order now... 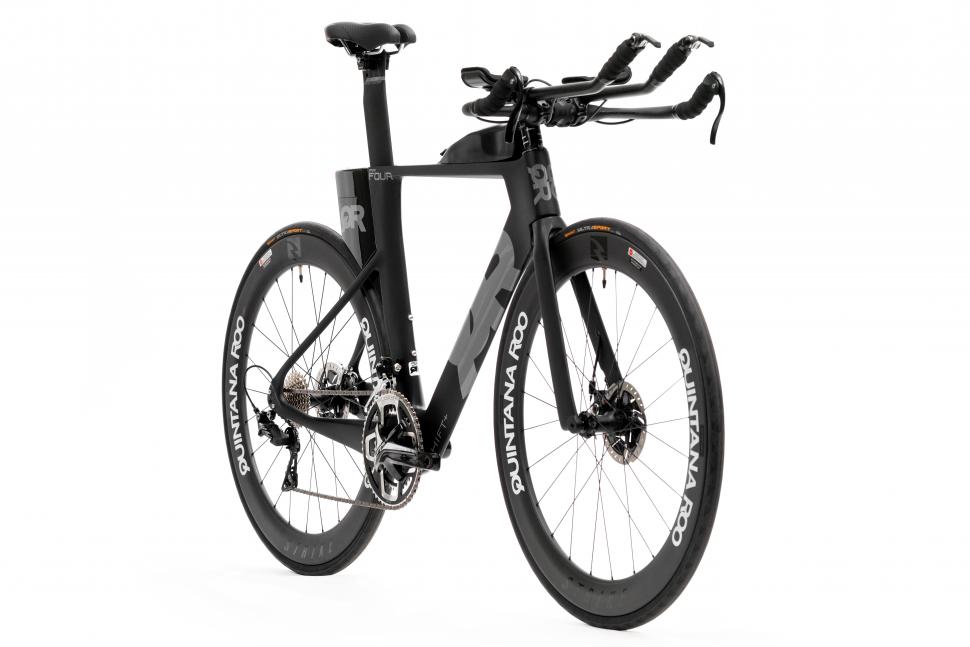 With the bikes above all in five figure sums, Quintana Roo's new PRFour is a breath of fresh air, coming in at a very affordable £2,299 with plenty of trickle-down tech from their higher-end PRFive and PRSix disc tri bikes (the version shown with carbon rims costs a little more). It's got a rear tool box with a handy light on it and a front pouch for food, and it has TRP Spyre mechanical disc brakes with 12mm thru-axles front and rear. A comfy ISM PR 2.0 saddle and Profile Design's Wing base bars and T4+ alloy extensions complete the package. 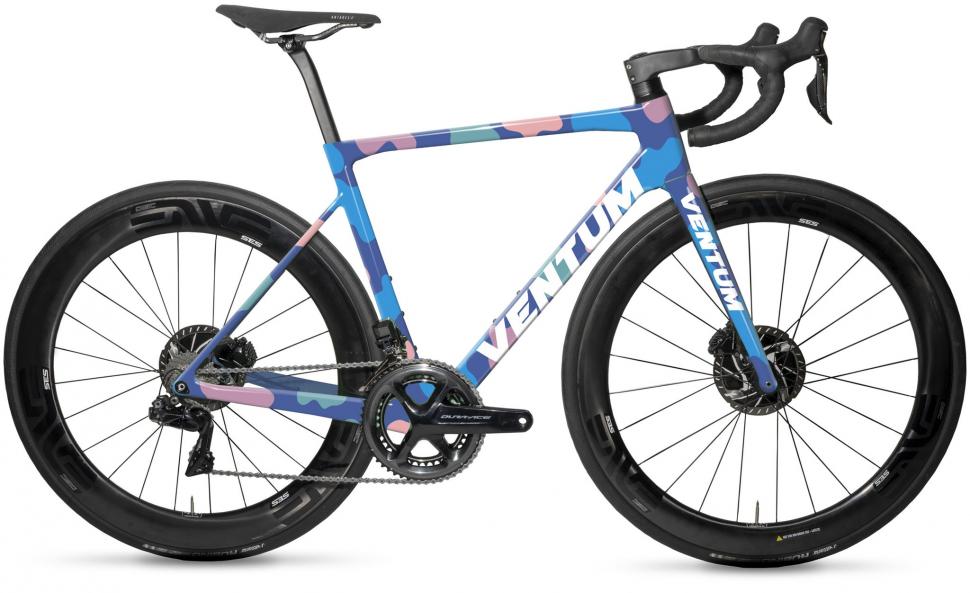 This new road bike from Ventum isn't tri-specific as such, but it's been launched by a brand whose only previous bike was the radical Ventum One, with no downtube or seatstays and a crazy integrated storage solution across most of the top tube (get a load of it here). The lightweight NS1 is UCI-legal and bang on the weight limit in its top spec, and I for one think it looks hot to trot with the cables completely concealed and the frame taking on a clean, aero appearance. The frame is mostly carbon and also has the super strong semimetal graphene infused into it, making it tough enough to use on gravel according to Ventum; it can take a 30mm tyre if you do want to take it off-roading. There are plenty of colourways if the one above isn't for you, and although we're not sure how much it's going to cost you'll need $2,000 just to reserve one, so you can be rest assured it's not going to be cheap...

Why has triathlon (finally) started to embrace disc brakes?

Quintana Roo have now introduced discs across their tri and TT bike lineup, and their Sales Manager Steve Dunn claims that discs don't only provide much better stopping power than rim brakes, but they've also found they have speed benefits:

"Quintana Roo is the first triathlon company to feature disc brakes across our full product range. Once the PRSix disc was introduced, we immediately began getting requests from customers and athletes asking for lower priced disc brake options, so we trickled down disc performance to the PRFive disc and now the new PRFour disc. We feel that incorporating disc brakes into the QR range offers real world benefit to triathletes of every level. Consistent braking power in all weather conditions and better braking modulation plus more confident handling are the first obvious benefits; but what many triathletes don’t realise is the increased stiffness provided by the combination of a 12mm thru-axle design, which essentially equals free speed. Feedback from our pro and age-group athletes also include more confident bike handling on the disc brake bikes.

"Disc brakes are widely referred to as not being aerodynamic, but in fact there are wind-tunnel tests that show disc-brakes are more aerodynamic at almost all yaw angles than standard direct mount brakes. It doesn't take a wind tunnel to look at the frontal plane of our PRSix and notice how cleaner the bike is without the rim brake caliper."