If you go along to the Rouleur Classic this weekend, here are some highlights of what you can expect to see. Now in its fourth year, the show appears to be going from strength to strength and once again gathered some of the finest bikes and stars from the cycling world under one roof in Central London. 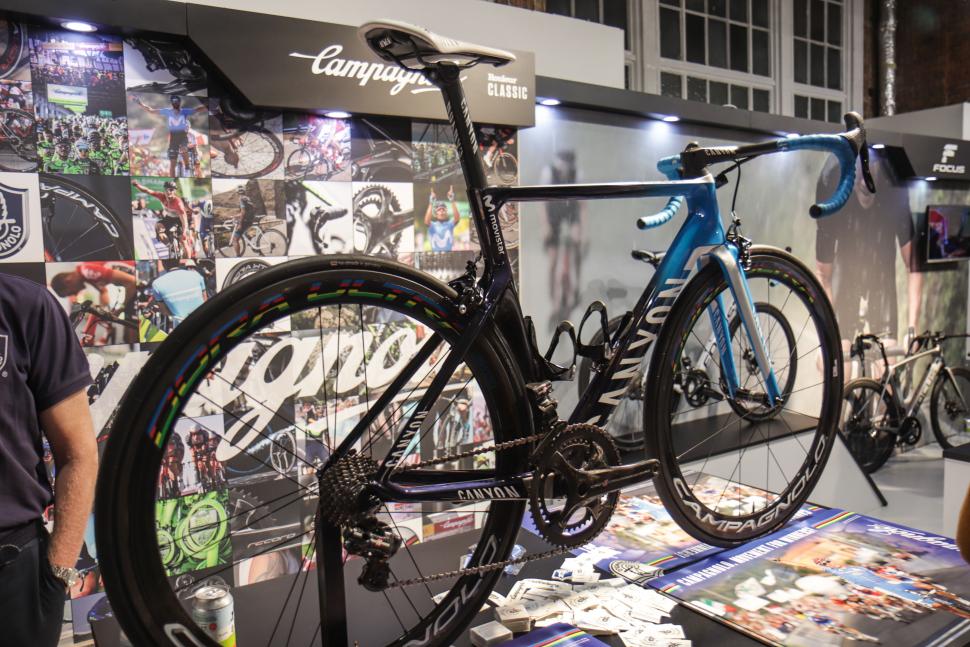 Over on the Campagnolo stand was this Movistar Canyon Aeroad CF SLX team bike. Not a patch on the 12-speed Campag Record-equipped Ultimate CF SLX we’re currently testing though… 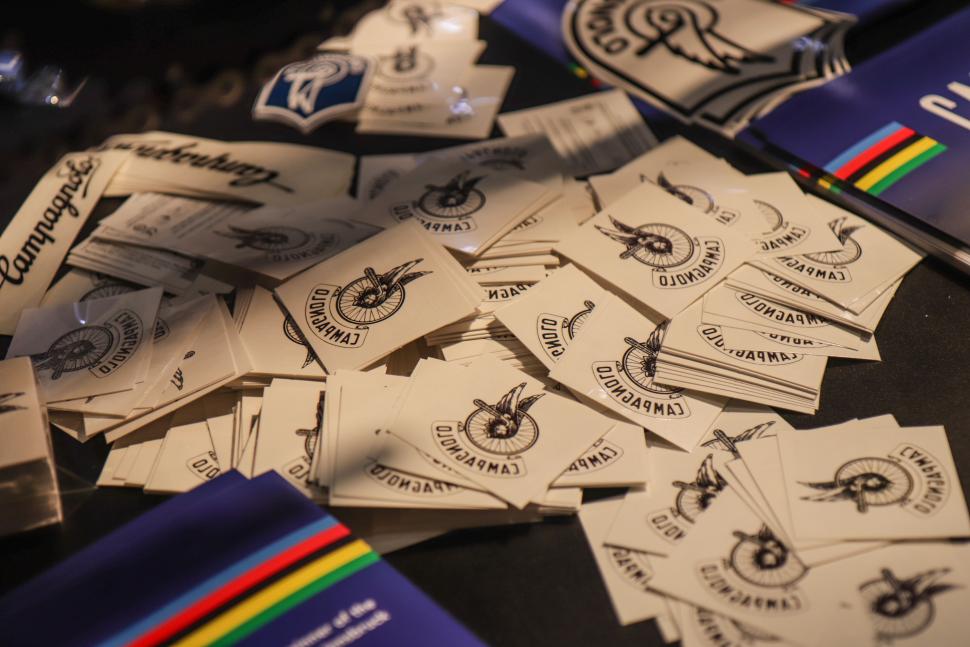 Nice stickers though, these did not last long at all. 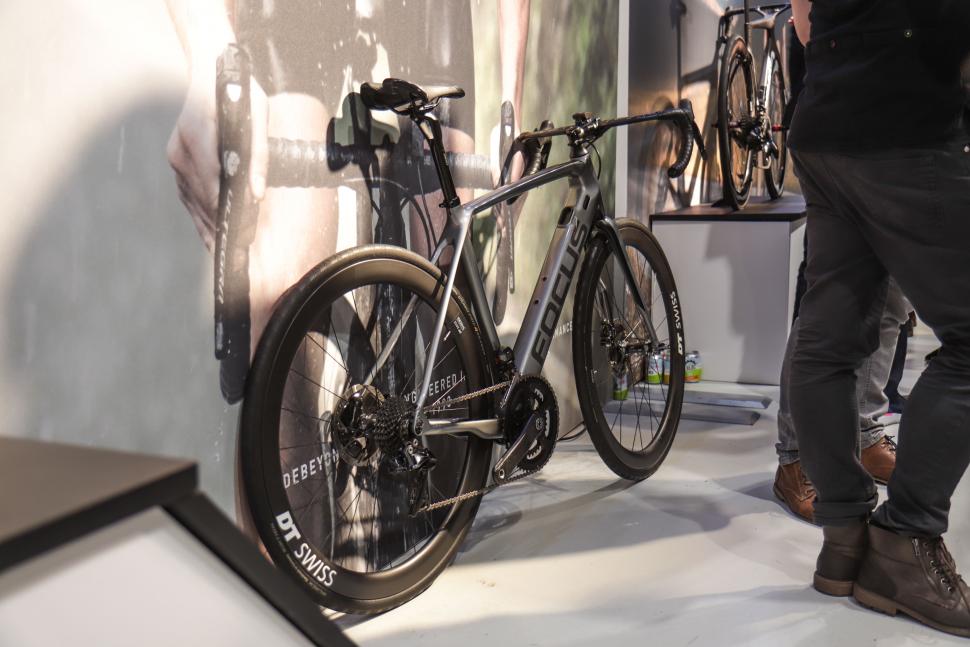 Focus had this e-bike hiding in the shadows. Doesn’t really look much different to a road bike though does it? 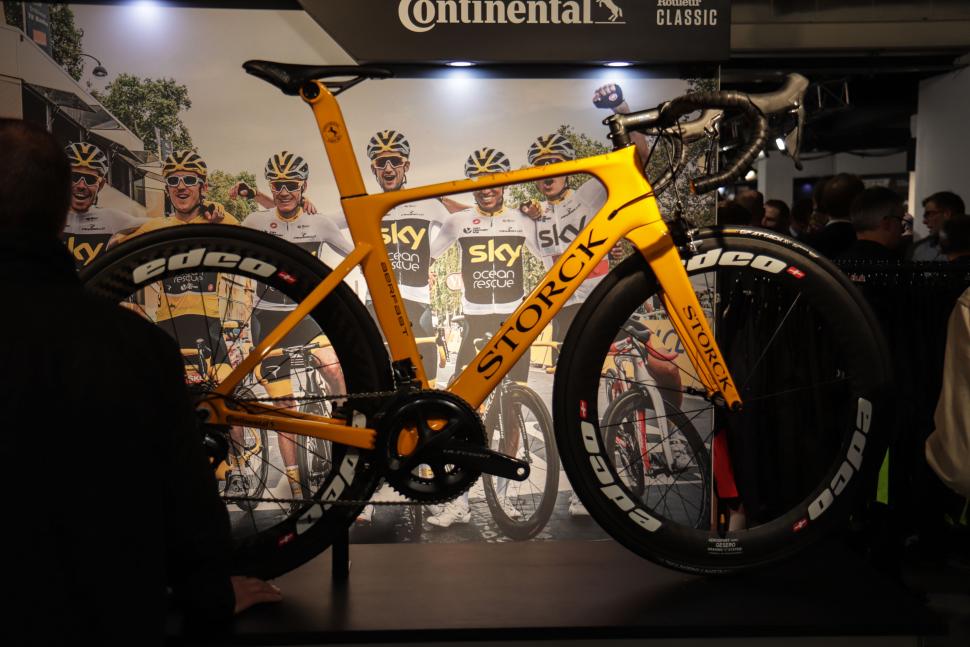 Continental was reminding everyone that Team Sky won using its tyres, and had this custom painted Storck on its stand with GP Attack and Force tyres fitted to some nice looking carbon Edco wheels. Why a Storck and not a Pinarello? Because the company that brings Continental tyres into the UK also looks after Storck. 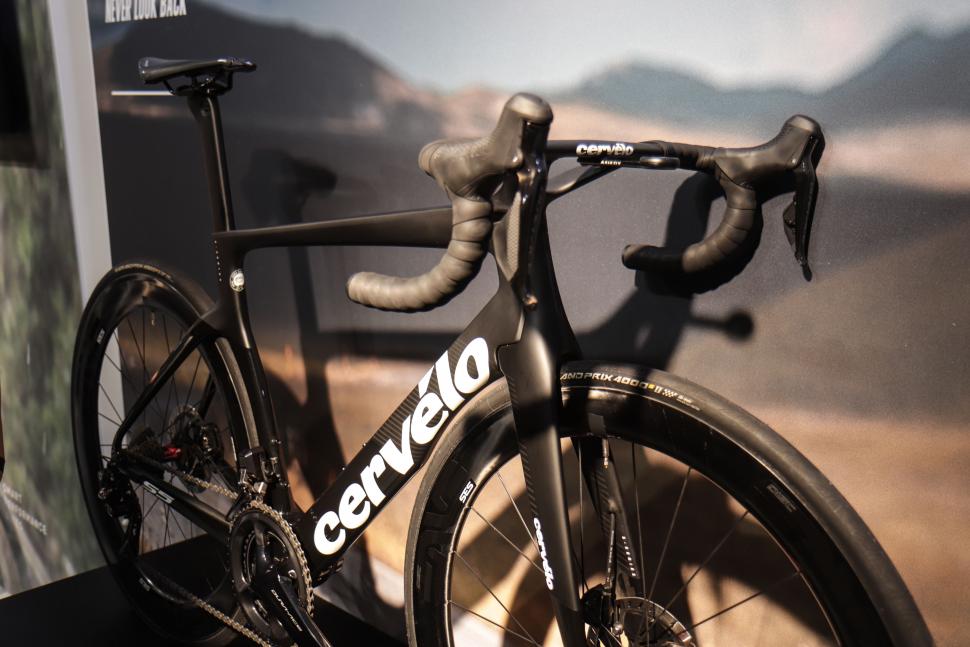 Finally got to see the brand new Cervelo S5 Disc in the flesh. It’s a radical looking bike with the V-shape stem, designed to smooth airflow across the top tube, and a full-length fork from dropouts to the aforementioned stem. 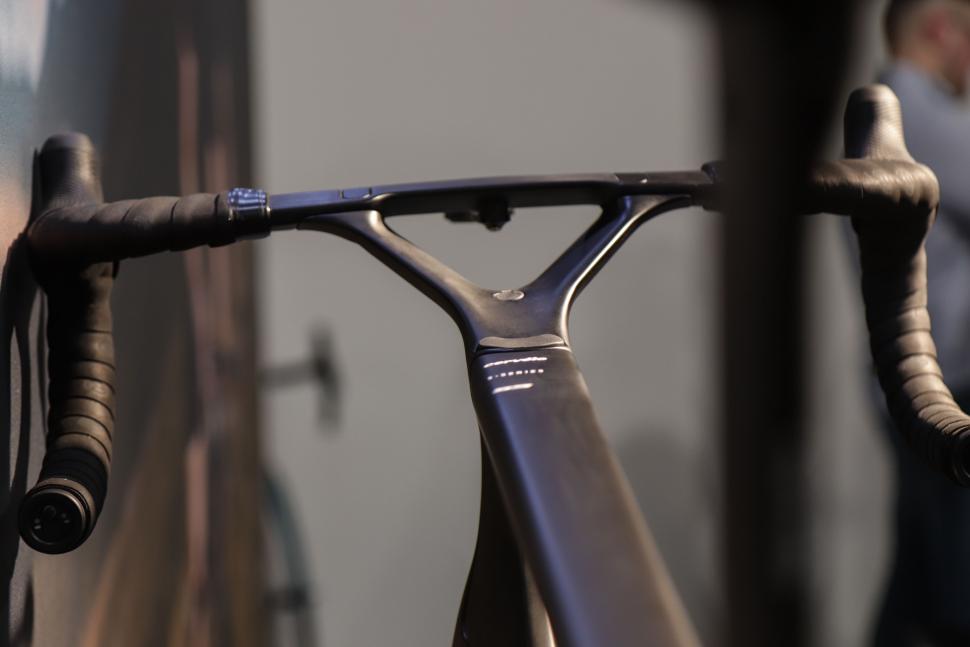 It looks like a one-piece stem and handlebar from a distance but it’s actually a two-piece design. That means you can more easily adjust the fit. The re-shaped down tube has been designed to manage air flowing off the front wheel and move it around the water bottle, with a choice of two mounting positions. 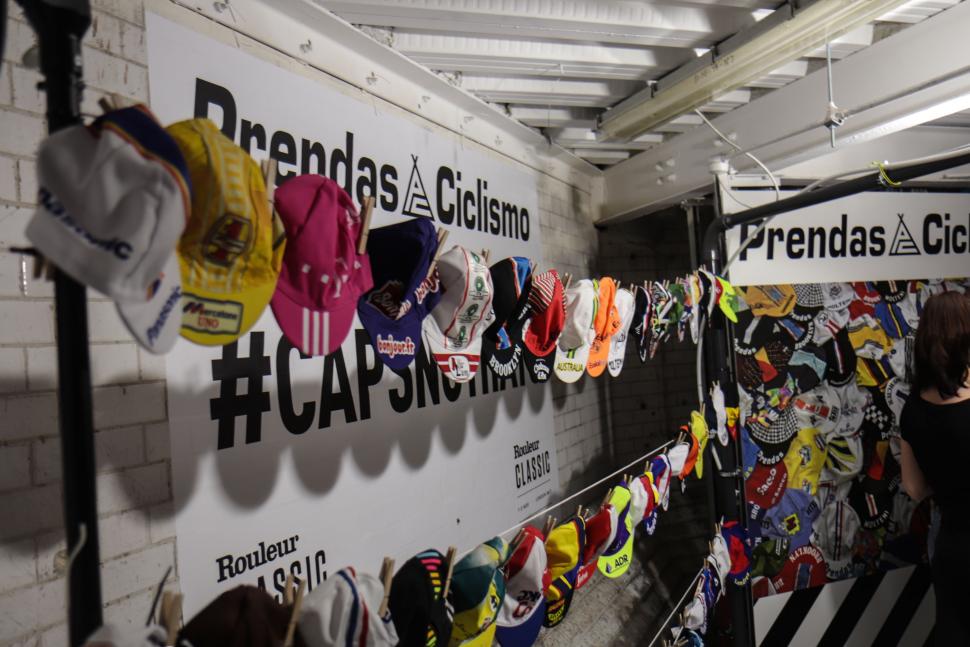 All the retro cycling caps from Prendas Ciclismo. Which is your fave? 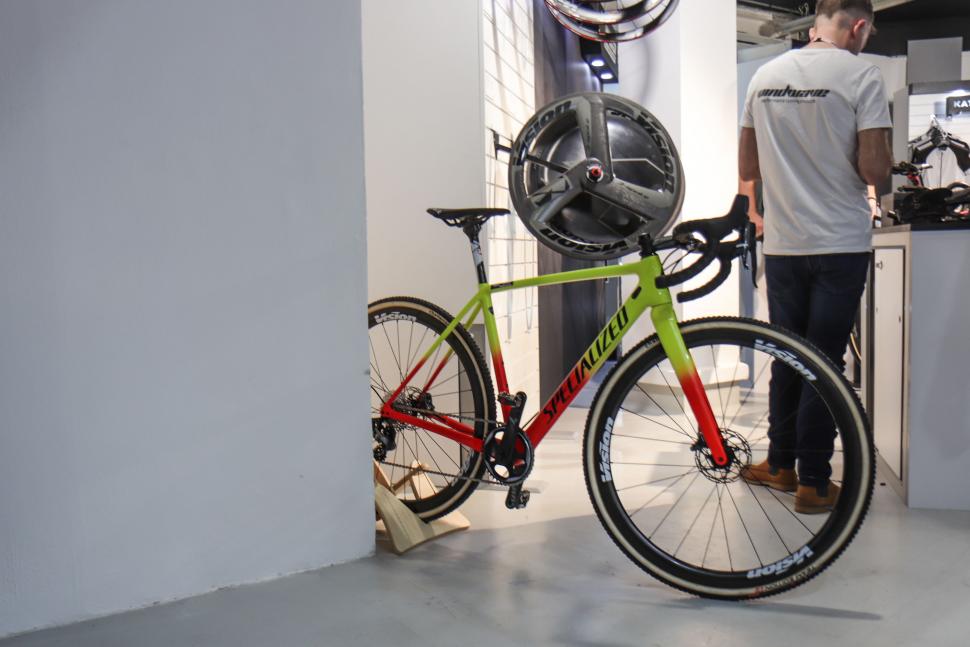 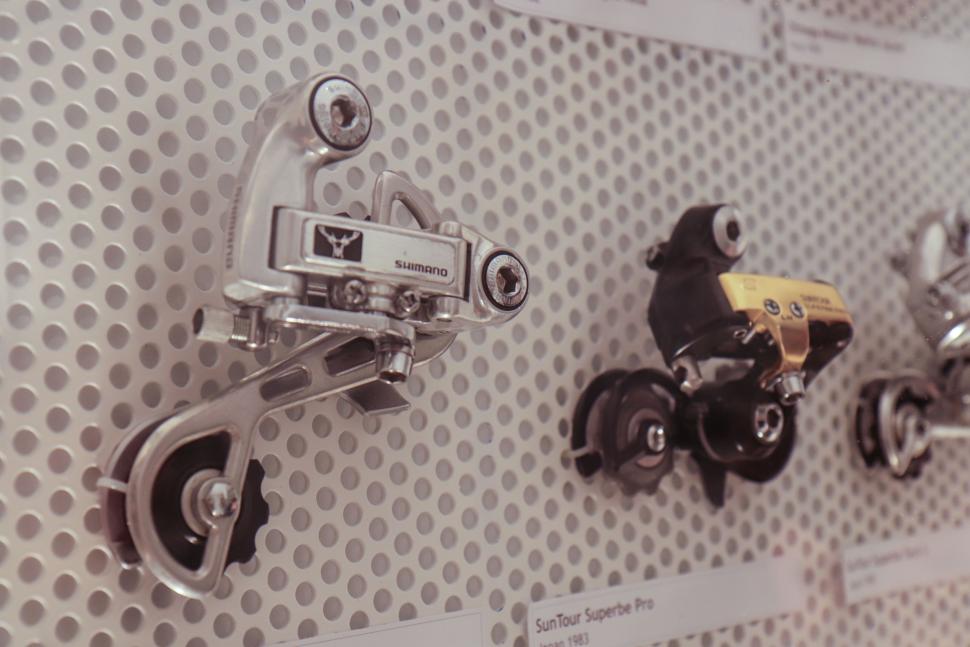 My highlight of the show was a small booth with an amazing collection of rear derailleurs spanning right back to the very earliest incarnations. It was interesting seeing people point to the earliest derailleur they remember seeing when they first got into cycling.

Cannondale’s brand spanking new SystemSix aero bike took pride of place on the US company’s stand. It was generating a lot of interest as the bike is so new it’s still a very rare sight. 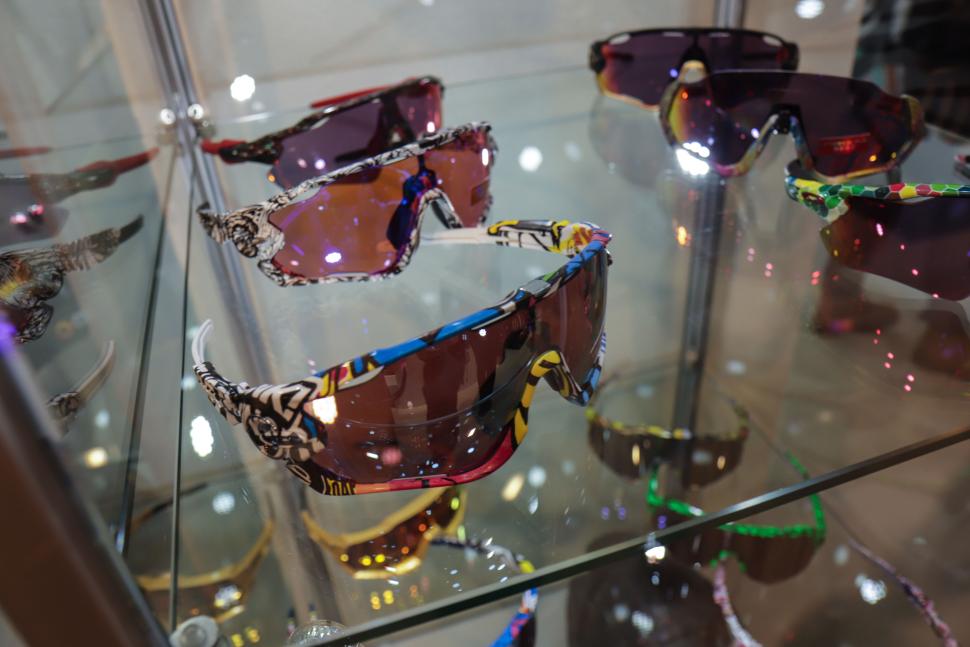 Ever wanted customised shades? Course you have, you just didn't know you could get them. HydroVision is a company that can provide customised cycling glasses and helmets and had some very cool designs on show. So if you want to stand out from the crowd you know who to call. 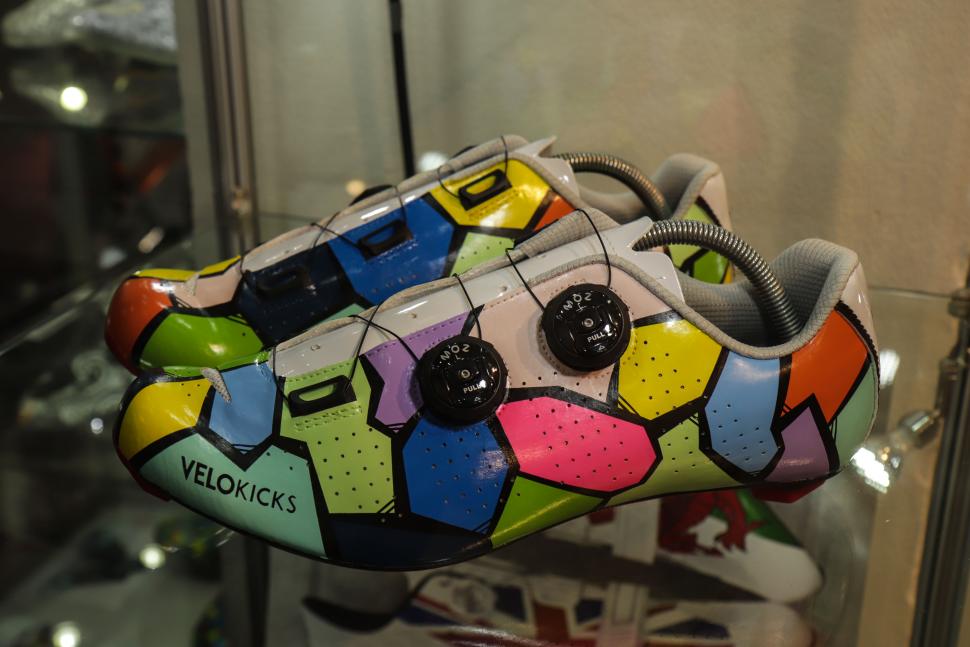 Artful Kicks provides customised cycling shoes and is seeing its stock rise with growing demand for its work. 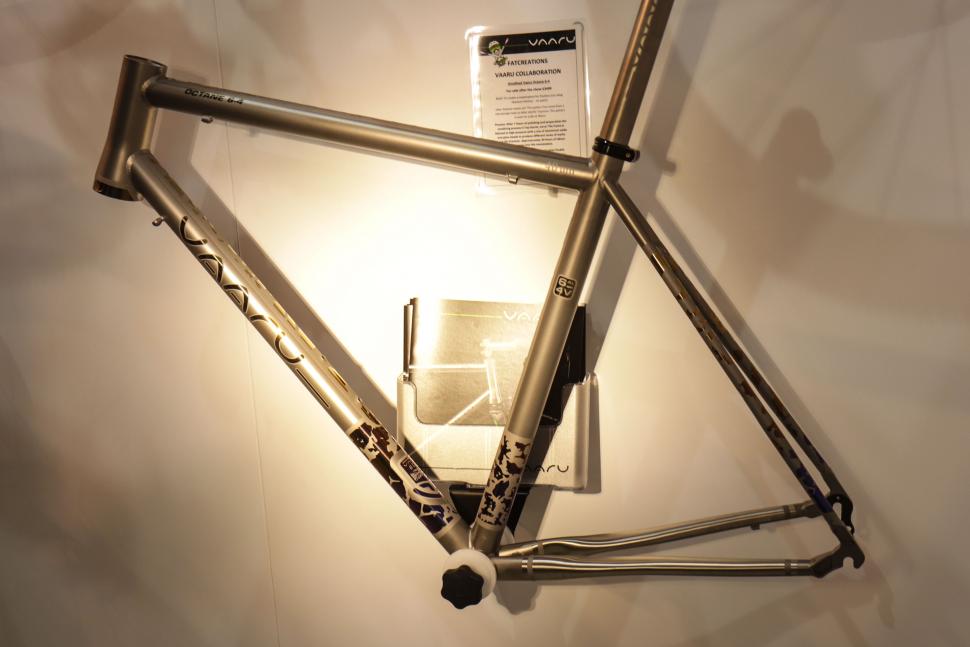 Vaaru is a young titanium frame specialist based in the UK and it has been producing some spectacular custom bikes in recent years, but this is perhaps the best we’ve seen yet. 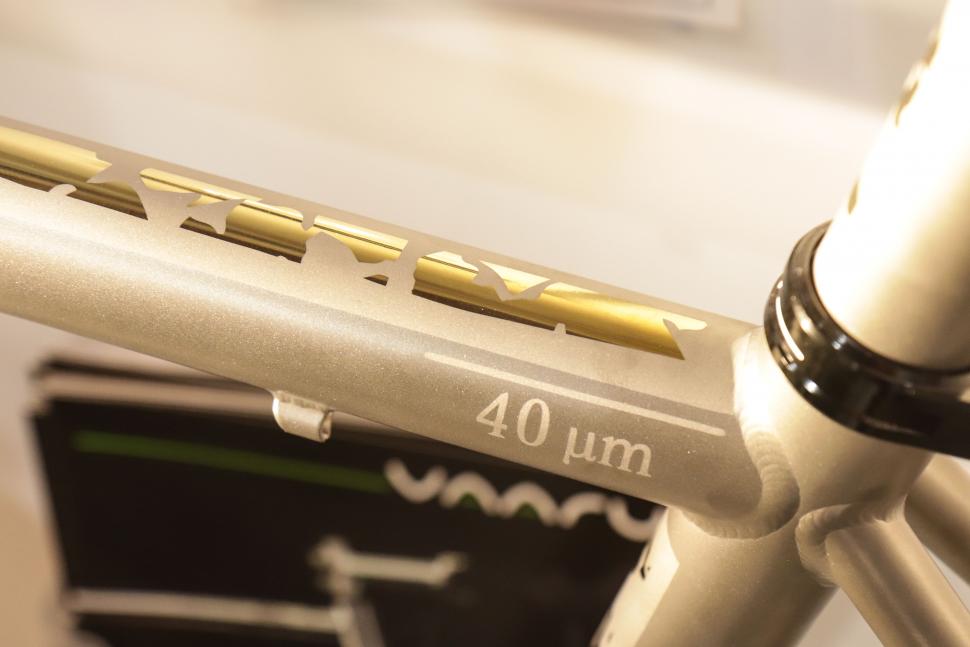 This Octane 6-4 has a finish that takes well over 30 hours to complete and combines a mixture of matte and silk titanium finish with a pattern inspired by what titanium looks like under a microscope at 40um. 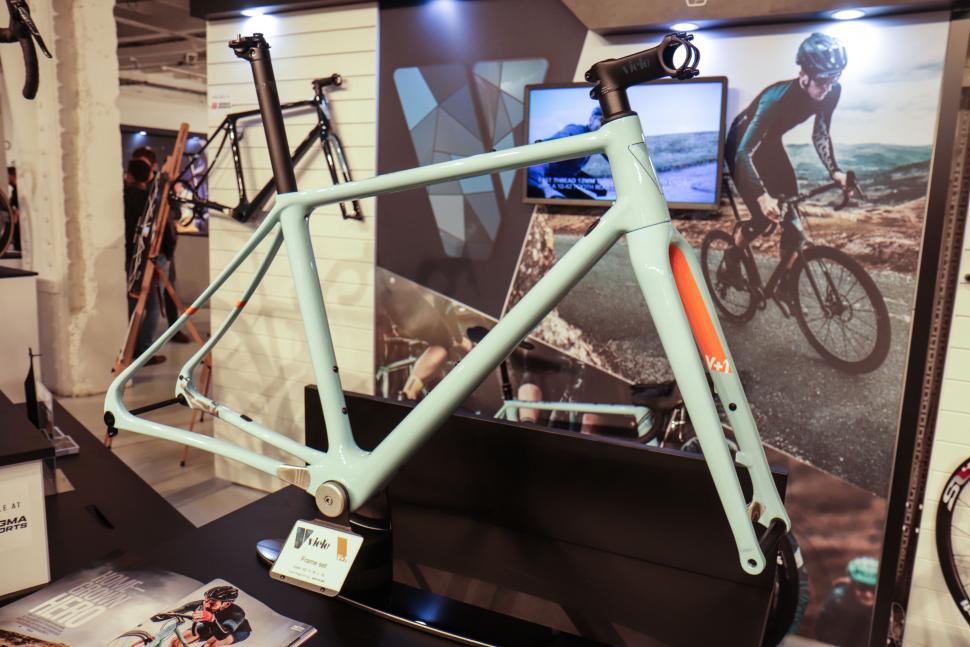 Vielo’s V+1 carbon fibre allroad bike available as a frameset for £2,995, and a nice way to look at the frame up close and admire all the details without components covering it. 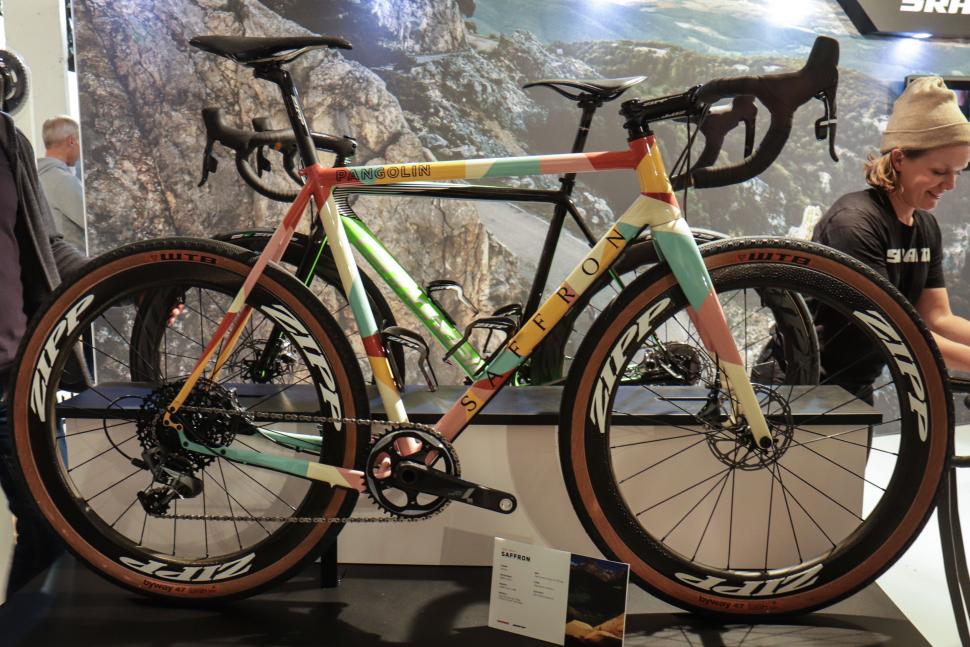 Saffron’s Pangolin is a gravel bike with space for WTB Byway 47mm tyres but it’s the multicoloured panel paint job that really caught our eye. 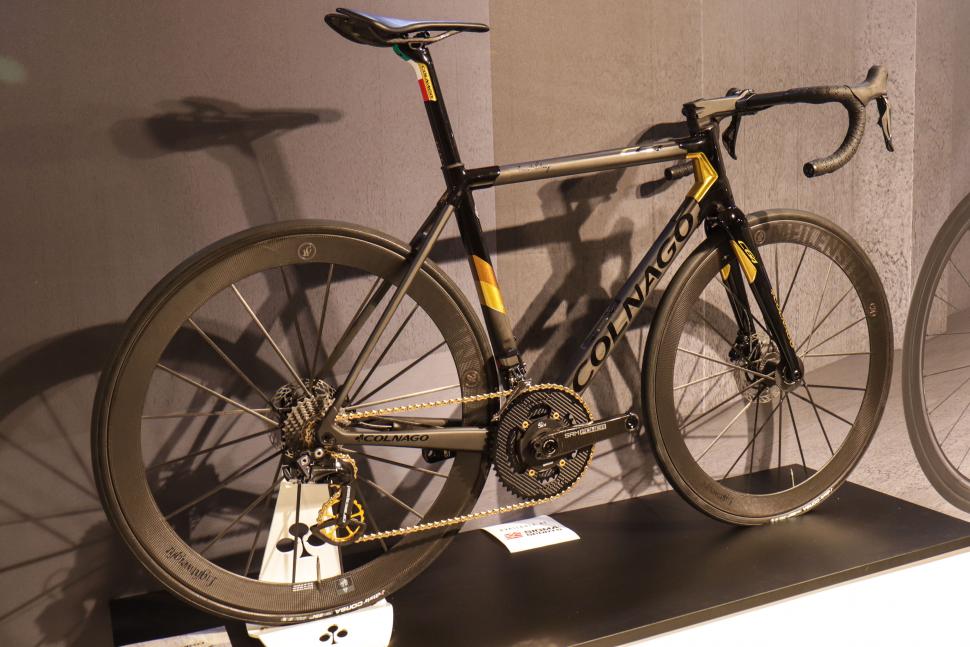 We’ve seen it a few times, but it never gets boring. It’s a very special edition Colnago C64 Disc with all the poshest equipment to produce an alarmingly expensive (probably) and very light bike. But it’s those gold lug inserts that really work well against the backdrop of black and carbon. 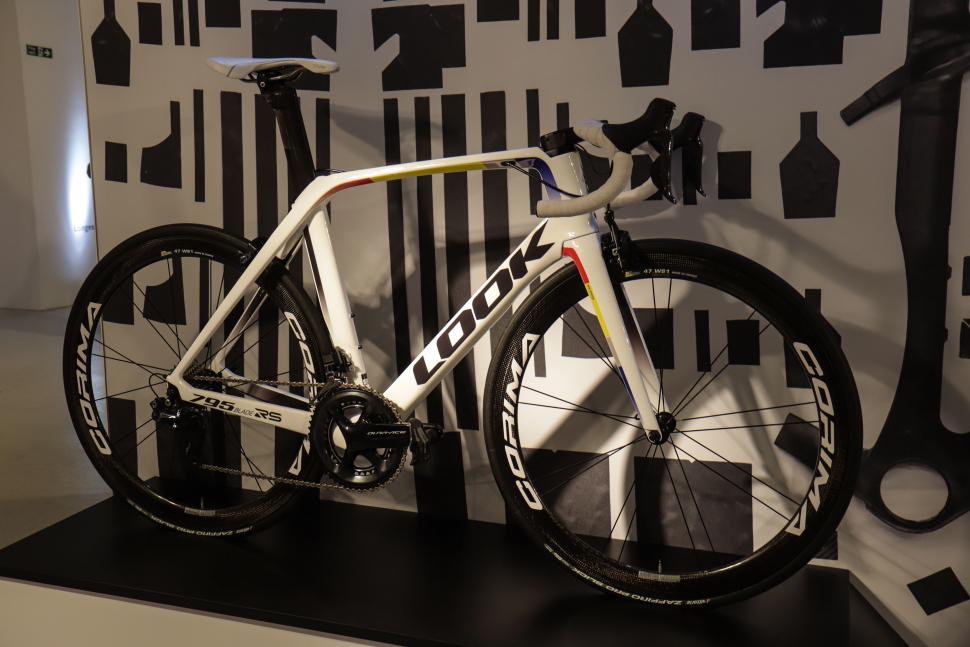 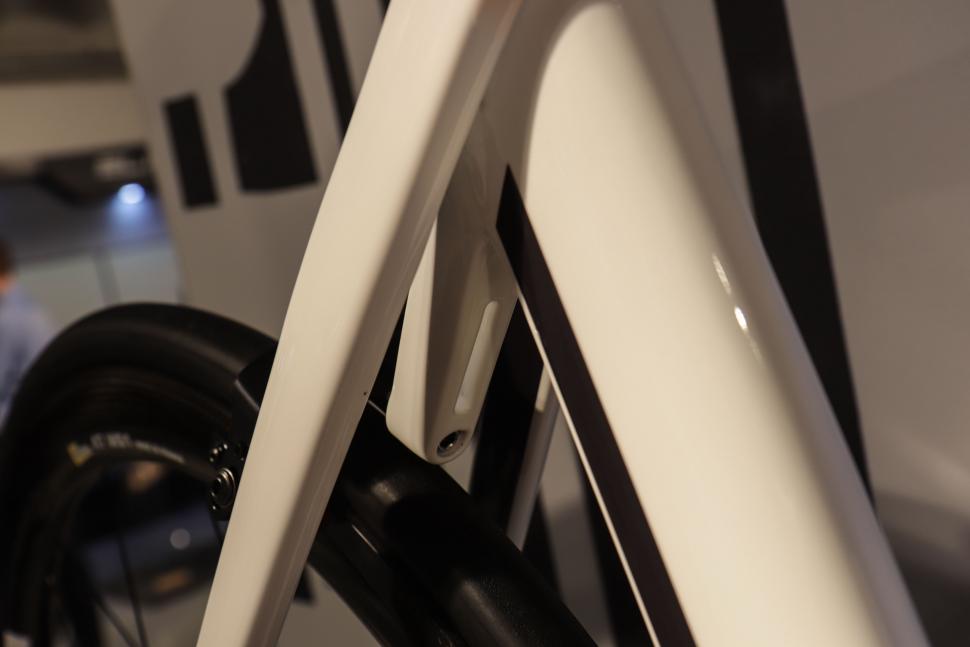 Perhaps my favourite detail though is the small stub that the rear brake is attached to, a feature of the new “Smooth Sword” seatstays designed to bend slightly under compression. 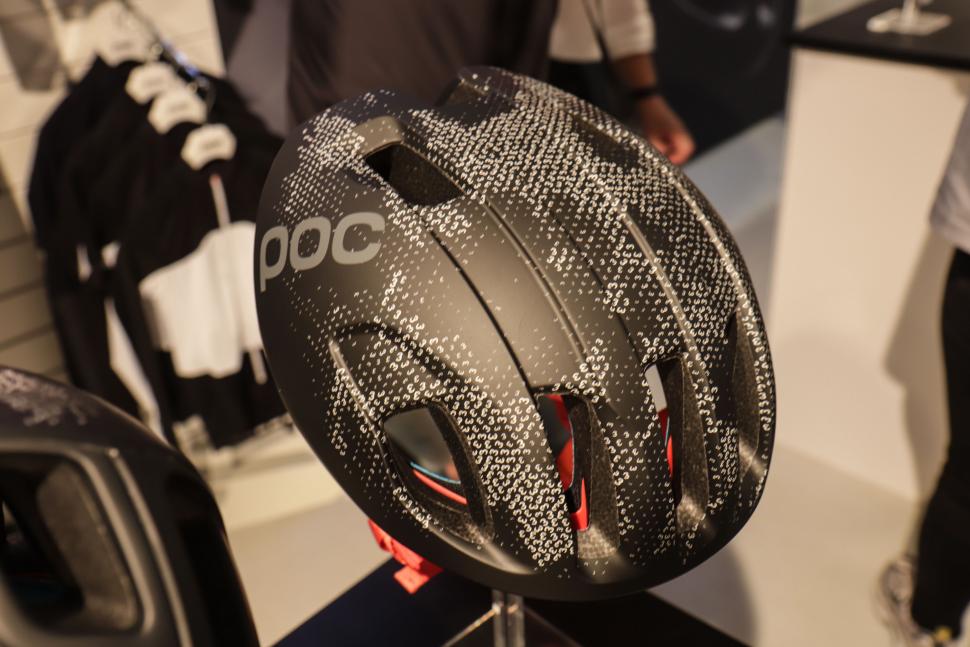 David Millar is actively seeking to expand his CHPT3 brand into as many areas as possible, the latest is a collaboration with POC. No random design, the pattern is apparently inspired by the Devisa Forest in Girona. 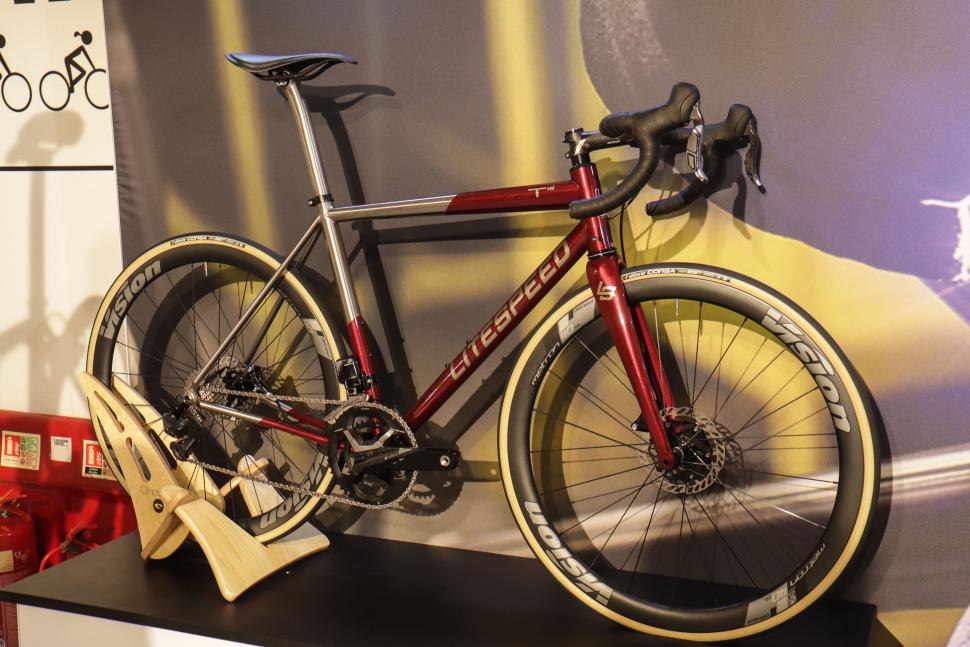 A very tasty Litespeed T1 SL Disc, the US company’s flagship road bike made to the highest standards and costing a cool £4,499.95. 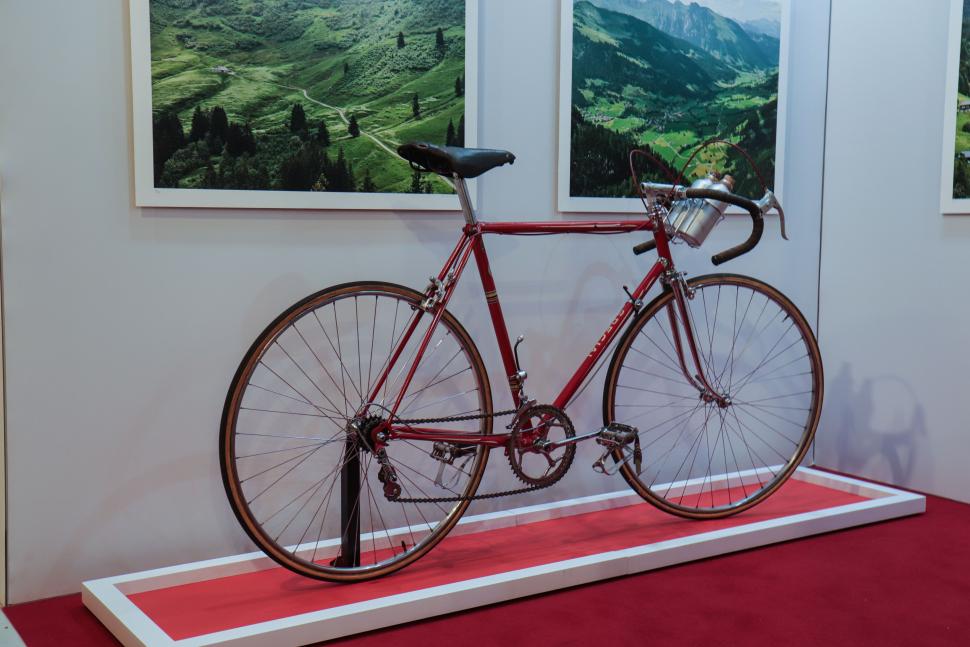 It's not all carbon and new-fangled bikes, there are some stunning retro bikes on display. 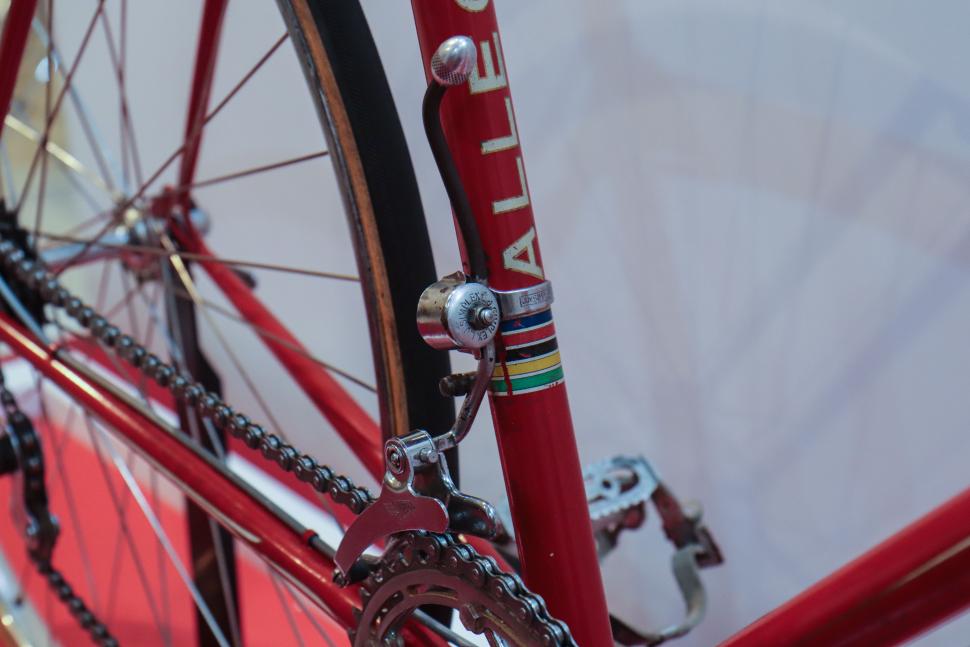 When you're next complaining about the gears on your bike, just remember how rubbish they used to be!

Here’s my personal highlight from the show. It’s a Specialized Allez Sprint painted by Argentinian-Spanish artist Felipe Pantone in a collaboration with clothing brand Romance. 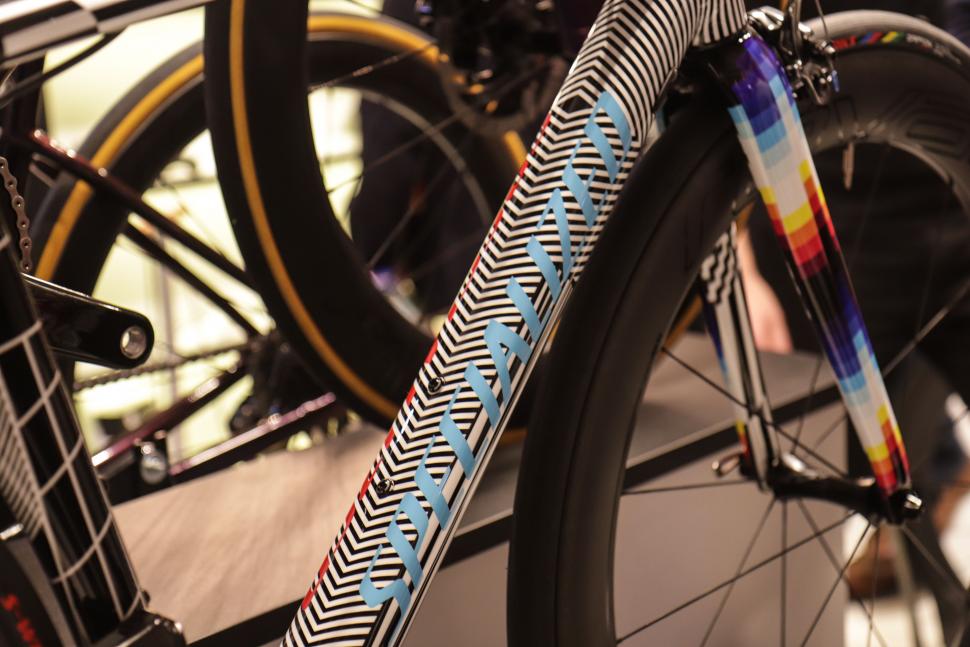 The bike will be auctioned right after the Rouleur Classic with all proceeds going to World Bicycle Relief. 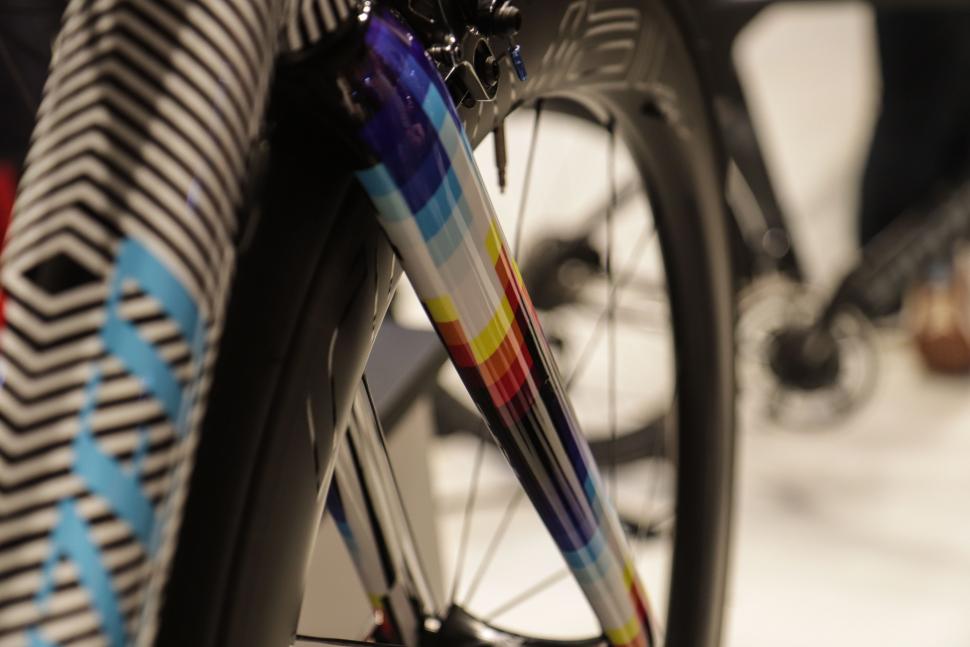