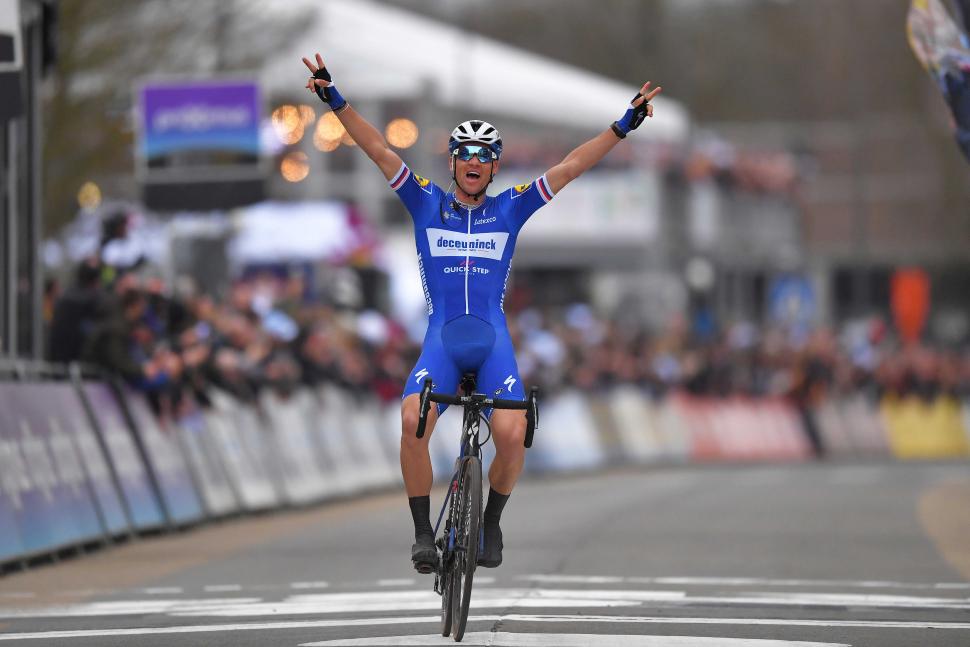 Disc brakes cleaned up at the opening weekend of the Spring Classics and a 1x made a rare appearance.

Deceuninck-QuickStep had a good weekend, winning the Omloop Het Nieuwsblad and Kuurne-Brussel-Kuurne. The team is sponsored by Specialized and its Tarmac and Venge models were ridden to victory in each race respectively, with disc brakes on both bikes.

Disc brakes were a more common sight this weekend than they have been in previous opening weekends. Disc brakes have been in and out of the pro peloton for the past few seasons as the UCI introduced and suspended its disc brake trial a number of times, but they are allowed now and 2019 looks like being the year when discs become a much more common sight.

Deceuninck-QuickStep isn’t alone in being a team committing to racing the full season on disc-equipped bikes, but despite the clear benefits of disc brakes in bad weather, we’ve seen in years past a preference for conventional rim brake bikes, which is probably as much to do with wheel changes in the event of a flat tyre as any other reason, in the cobbled classics. Like the situation last year with Peter Sagan switching to a special Roubaix with rim brakes, a model which Specialized does not offer.

That means the Spring Classics are arguably the toughest proving ground for disc brakes in pro bike races. Conditions are usually bad with rain and mud common, where disc brakes might shine, though it’s not uncommon to have very dry and dusty conditions where said benefit might be reduced.

But by winning the opening weekend of the Spring Classics, two races featuring famous and iconic cobbled sections, the team proved disc brakes don’t necessarily have to be the handicap that so many critics have argued they are for the past handful of years.

Of course many people will just claim it’s a marketing stunt and obviously, each rider would have won their respective race regardless of the disc brake system, which they most likely would have done. But they also proved that the disc brakes weren’t the handicap that many believe them to be, though how much if any advantage they offered to the riders is impossible to speculate, we'd have to ask them directly to find out. There's not a lot of braking on these courses but there are some tricky roads and corners to contend with.

Anyway, with disc brakes proving they can be ridden to race victory, perhaps now we can move on from the whole disc brake debate that has been rumbling on for the past few years and accept it as another technological advancement along with index gears, the freewheel, pneumatic tyres, clipless pedals, carbon fibre and aerodynamics?

You have to go all the way back to 2017 for the first professional road stage victory on a bike with disc brakes. That was Tom Boonen of Quick-Step Floors and a stage of Argentina’s Vuelta a San Juan race.

Groupsets have improved hugely in the last couple of decades, we’ve come a long way from having to reach down to operate a manual lever! One of the latest and most interesting developments is 1x, which aims to improve the simplicity of gear changing by ditching the front derailleur and double chainset.

Aqua Blue Sport had well-publicised issues with its radical 3T Strada 1x bikes. The team has since folded and with it, according to some on social media, any hopes of a future 1x experiment. But there  was a rare glimpse of a 1x shod bike in the Omloop Het Nieuwsblad however, with Trek-Segafredo’s Mad Pedersen rocking a 1x version of SRAM’s brand new Red eTap AXS groupset, which as you know if you saw my first look, offers a new 1x setup for the first time.

We don't have a photo of his bike from the race, but here's the same Trek Madone with SRAM Red eTap AXS 1x shared last month on Instagram.

Mads Pedersen’s weekend didn’t go quite to plan, in fact, the riders offered an apology for their poor performance, so the lack of a conventional drivetrain can’t be cited as the reason the young Danish rider, who finished second in last year’s Tour of Flanders, didn’t post a better result.

We don’t know how he got on with the groupset but it looks like it’s not the first time he’s ridden this setup, with pictures of his bike in 1x trim appearing on social media through the winter training season months. Whether he sticks to the groupset as the classics season progresses is unknown but we’ll certainly be keeping as close an eye on him as we can.

Lots of people have speculated that 1x will be best suited to flat races and time trials, but the new SRAM cassettes aim to offer most of the range of a conventional drivetrain and should ensure that even on a course with lots of cheeky climbs like those around Flanders should be rideable even with no little chainring to call on.

The roads of Belgium and northern France could be ideal for a 1x setup though. We regularly see bikes specced with very close ratio chainrings, the 39 swapped for a 44 to reduce the gap, for those sectors where a 53 is too big but a 39 too small. They might as well just go with a single ring? 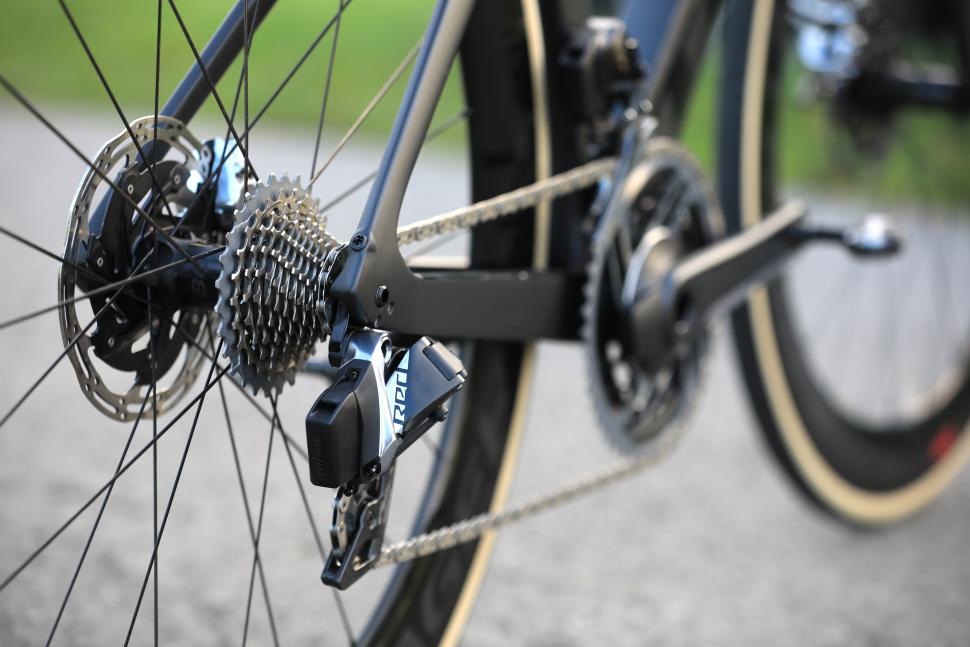 But chain retention is an issue. That's why we also see chain catchers intended to prevent a dropped chain, if the front derailleur doesn’t first prevent that from happening.

One of the key features of SRAM’s new groupset is a rear mech with a fluid damper, which offers the same increased chain tension as the clutch-style mechs common on mountain bike 1x groupsets.

You only need to look at a photo from a bike on the cobbles to see how much the chain bounces and flaps about. SRAM’s new rear mech is aimed at preventing this and would be a key feature of ensuring the 1x drivetrain works over the cobbles. 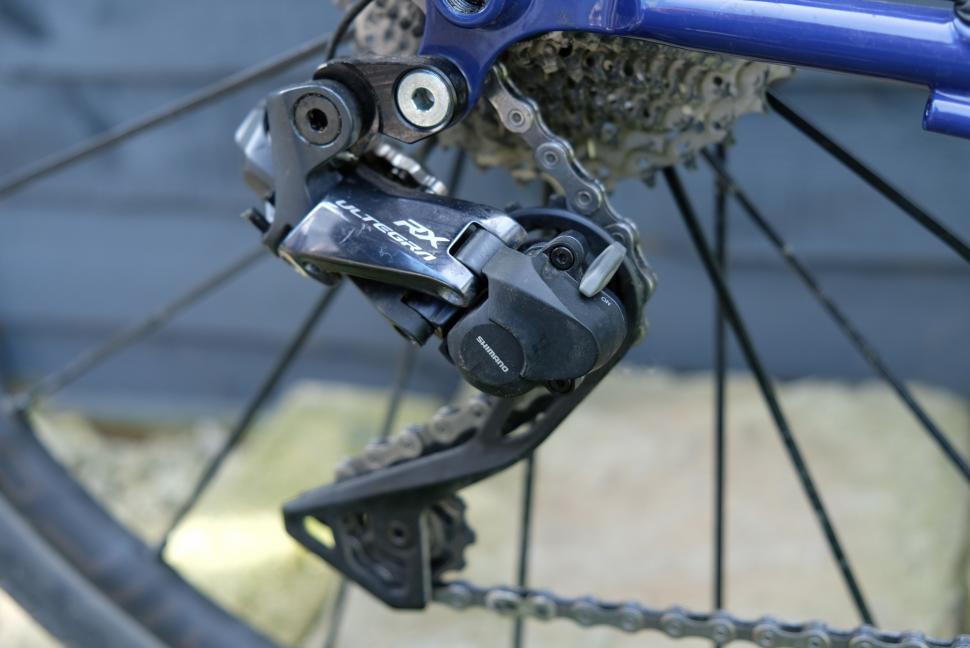 Shimano also has its Ultegra RX rear mech, which uses a conventional clutch system that can be turned off for easy wheel removal. It was introduced in April last year and I would expect a few teams to opt for it ever Dura-Ace for the extra security it affords.

That's all for now. The new few weeks could be ripe for lots of interesting tech, and there's likely to be some new bikes and equipment being trialled. If you see anything let us know!

More tech from the classics soon...