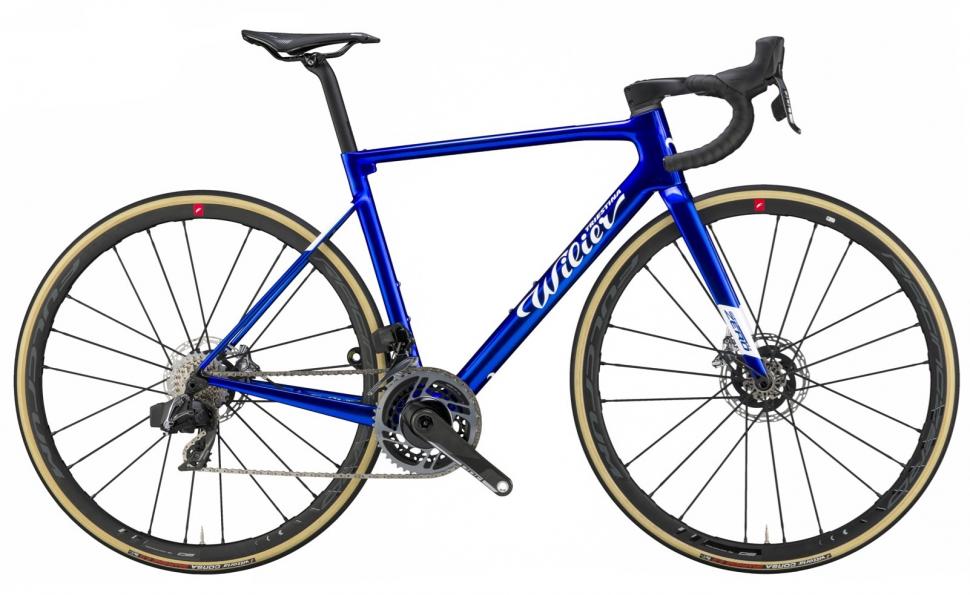 Wilier has revealed its new Zero SLR which it says is the first superlight road racing bike with disc brakes and fully integrated cables.

Seeing as Wilier is making such a big deal of the weight, let's give you that info right away: the medium version of the frame, in a matt black finish with white graphics, has a claimed weight of 780g (+/-5%). The fork, again in a black/white finish, has a claimed weight of 340g (+/-5%). The complete XL bike we weighed, with a Shimano Dura-Ace Di2 groupset and non-standard Mavic wheels, was a whisker over 6.8kg (including pedals). 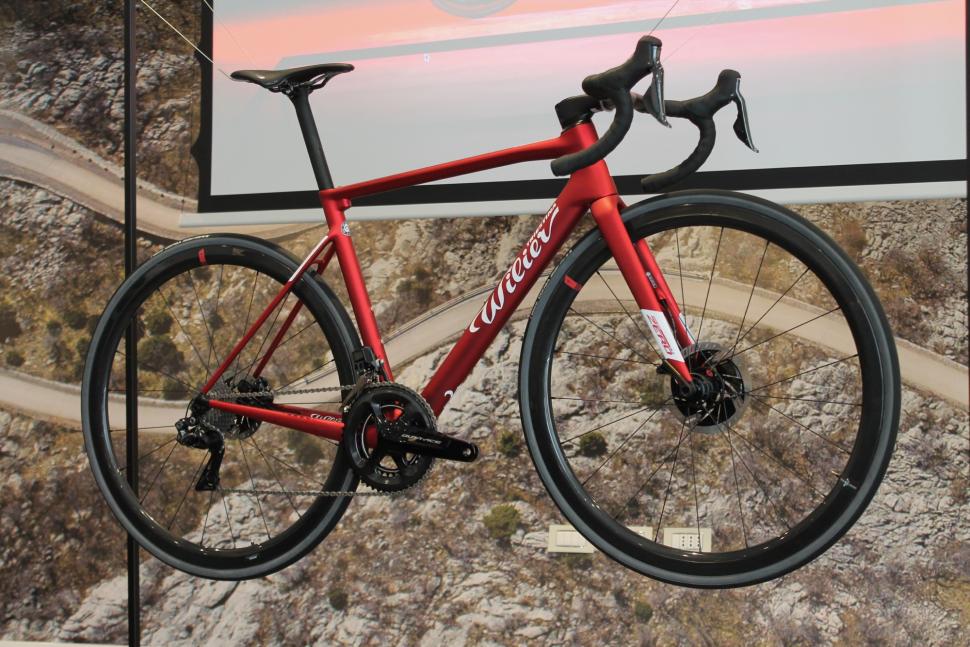 Wilier reckons that the Zero SLR's stiffness-to-weight ratio is significantly greater than that of any bike it has previously released. A large part of that is said to be down to the fibres used in the frame's construction.

"For the Zero SLR we selected the highest quality fibres, calling the blend HUS-Mod: this composition is qualitatively superior to any previous type of material [we have] used," says Wilier.

"In addition to the HUS-Mod carbon, we also included a highly resistant multi-directional fibre mesh to increase rigidity in every direction and liquid crystal polymer woven to improve impact resistance and vibration absorption. 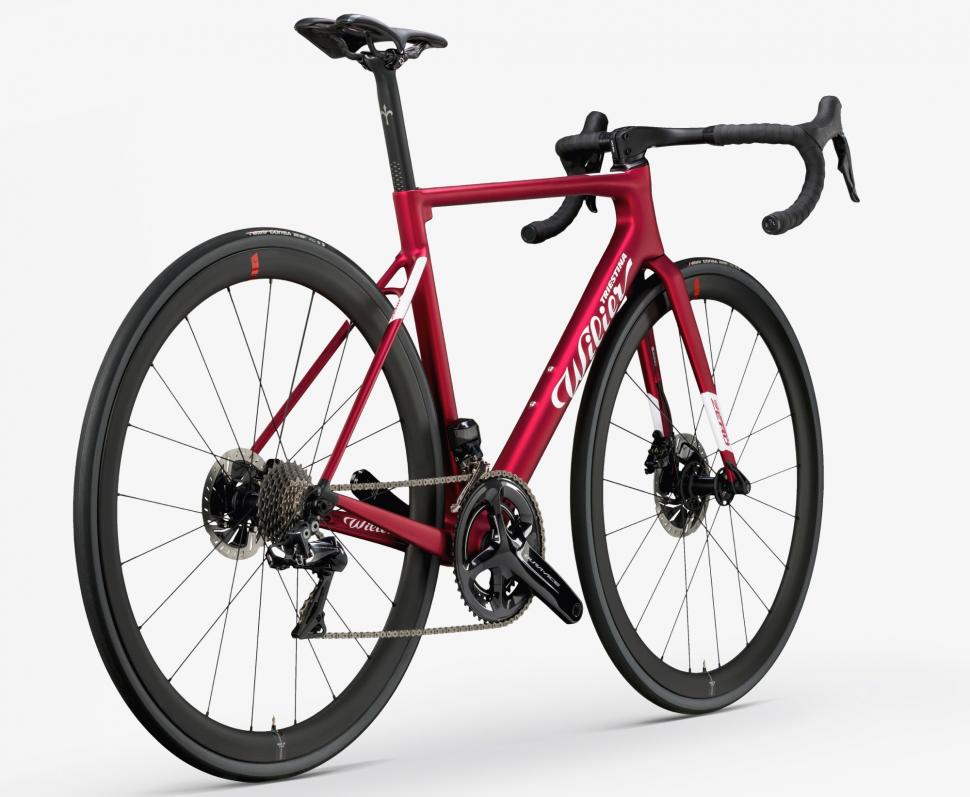 Other brands already use liquid crystal polymer in their frames. Bianchi, for instance, uses Kevlar inserts in bike like the Intenso, and Time uses both Kevlar and Vectran.

Mention of the HUS-Mod carbon and liquid crystal polymer begs a lot of questions, but Wilier was cagey at the Zero SLR's press launch last month. The liquid crystal polymer is used in certain unspecified areas of the frame and fork rather than throughout, but that's all it was saying. Top secret information, we were told, that can't be shared for commercial reasons. 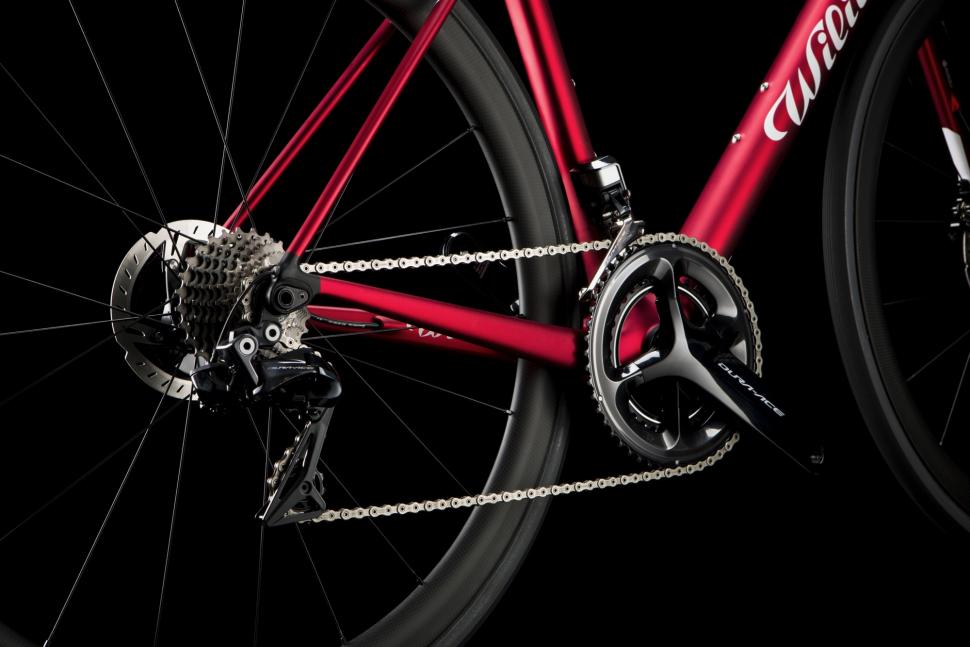 "The grade of liquid crystal polymer used in the construction of the Wilier Zero SLR was carefully chosen to give us the physical properties we need," said Wilier's product manager Claudio Salomoni, and he wouldn't be drawn any further! 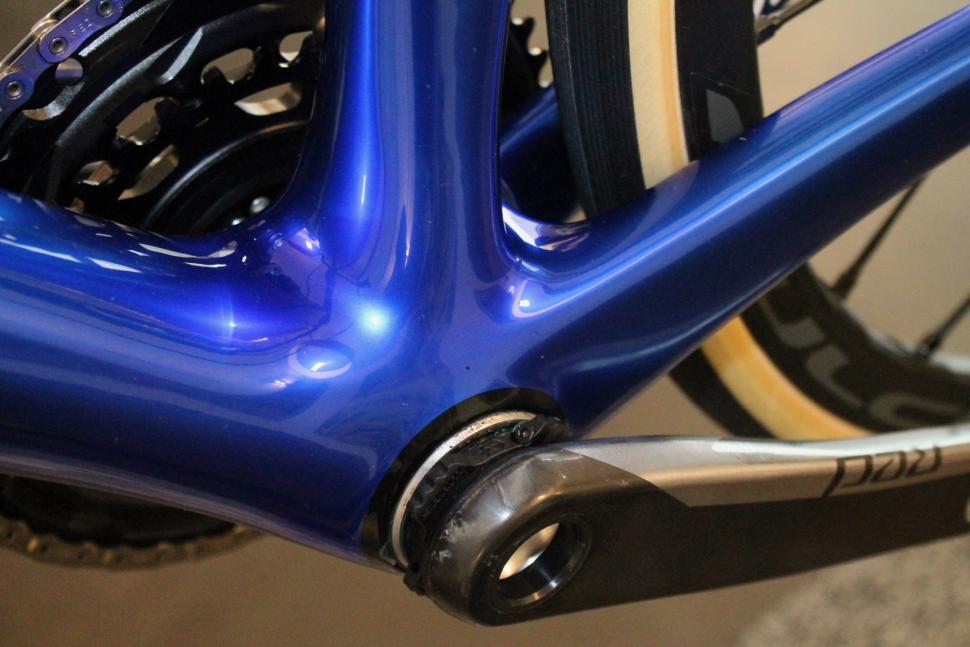 Wilier's argument is that the proof of the pudding is in the eating and it gave us a few hours on board the new bike. 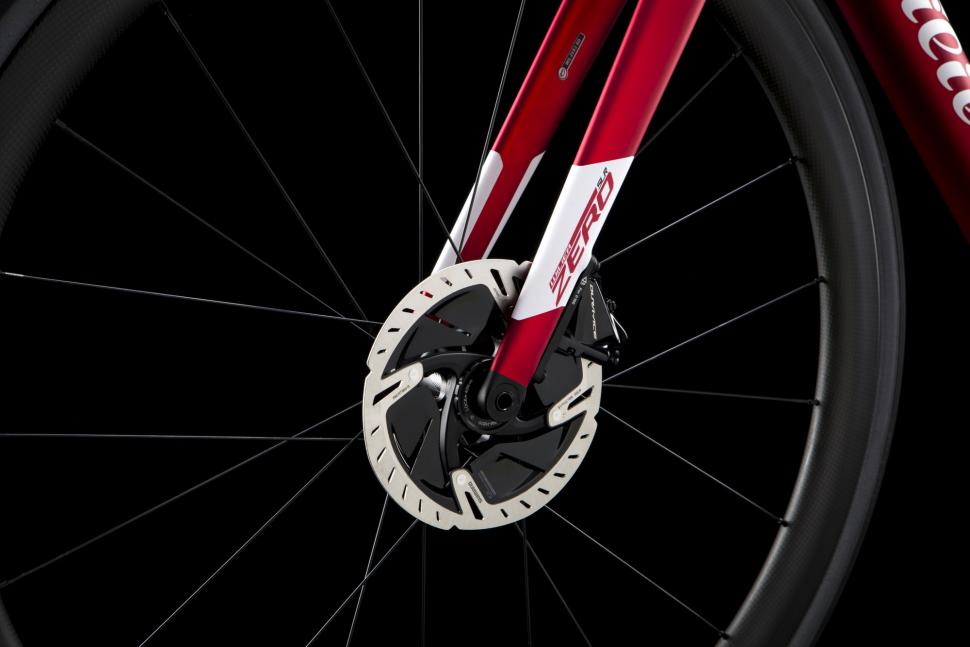 Any disc brake fork is asymmetric in that you get the brake mounts only on one side, but Wilier has also given the legs different cross sections.

"We reinforced the blade housing the brake calliper with a wider section than the other to ensure the fork is able to balance the asymmetrical forces generated by disc braking, while maintaining excellent handling even during braking," says Wilier.

"To improve aerodynamics, we increased the distance between the fork blades and the wheel, something we learned when developing our Wilier Turbine triathlon and time trial bikes. This reduces the turbulence generated by the wheel and the frame when in motion, and improves aerodynamic penetration."

Several other bikes have recently been given fork legs that are further apart for the same reason, the Storck Fascenario.3 being one example. 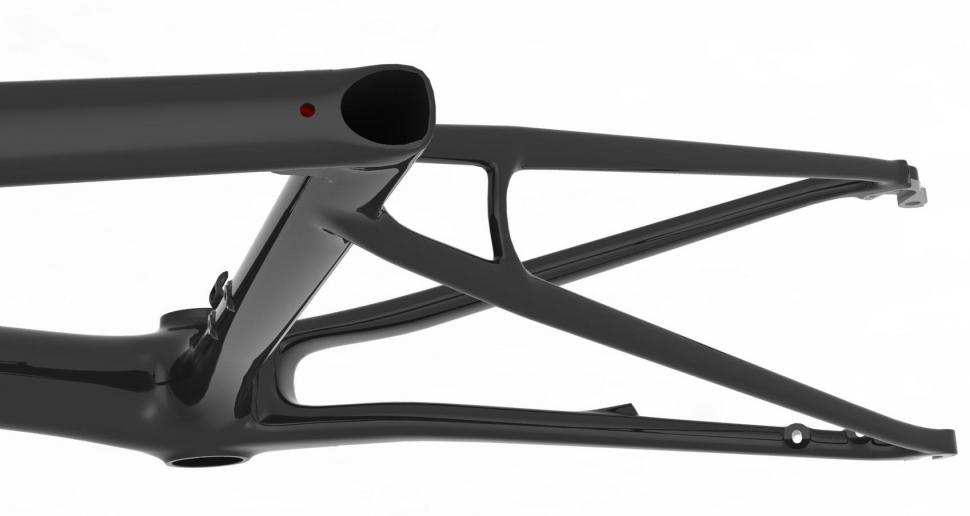 The rear triangle is also asymmetric, although rather than being designed to counteract braking forces, the idea here is to prevent lateral movement caused by the drivetrain.

Like the fork, the frame is compatible with tyres up to 28mm wide (although 25mm tyres are specced by Wilier) and both use thru axles to hold the wheels in place – 100mm at the front and 142mm at the rear. 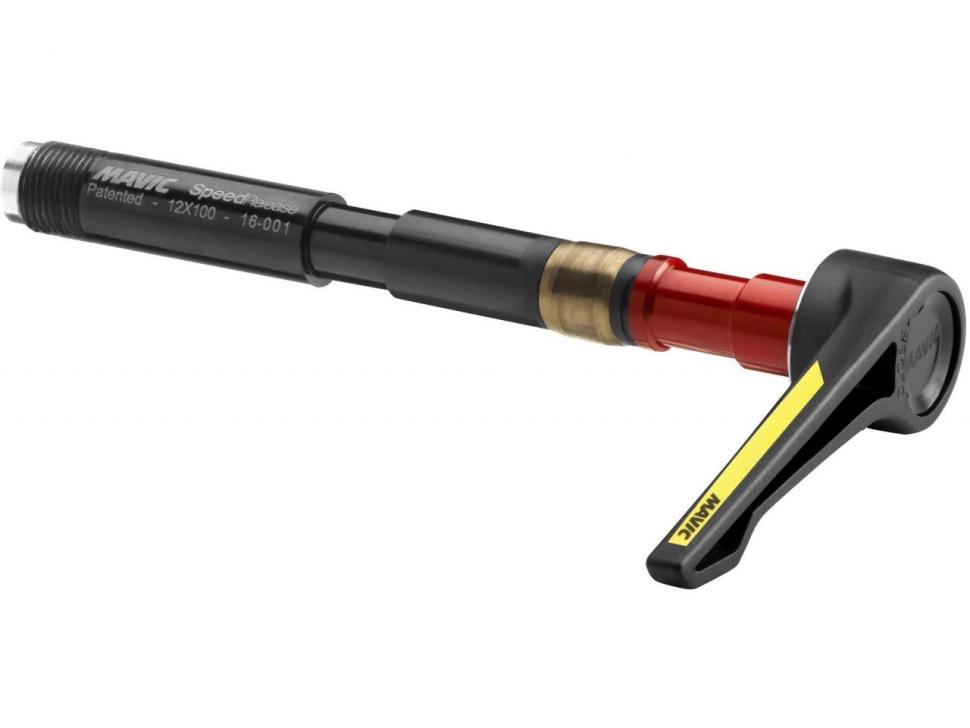 Wilier uses Mavic's Speed Release thru axle system that allows the wheel to be removed quickly. Wilier says that it chose Speed Release to save weight (a claimed 85g per pair) and to safeguard the integrity of the frame. When you tighten the wheel in place, the integrated control system prevents excess torque that could strip the thread. Once you reach the required torque, the lever 'jumps', a bit like many torque wrenches, and doesn't allow you to tighten any further. 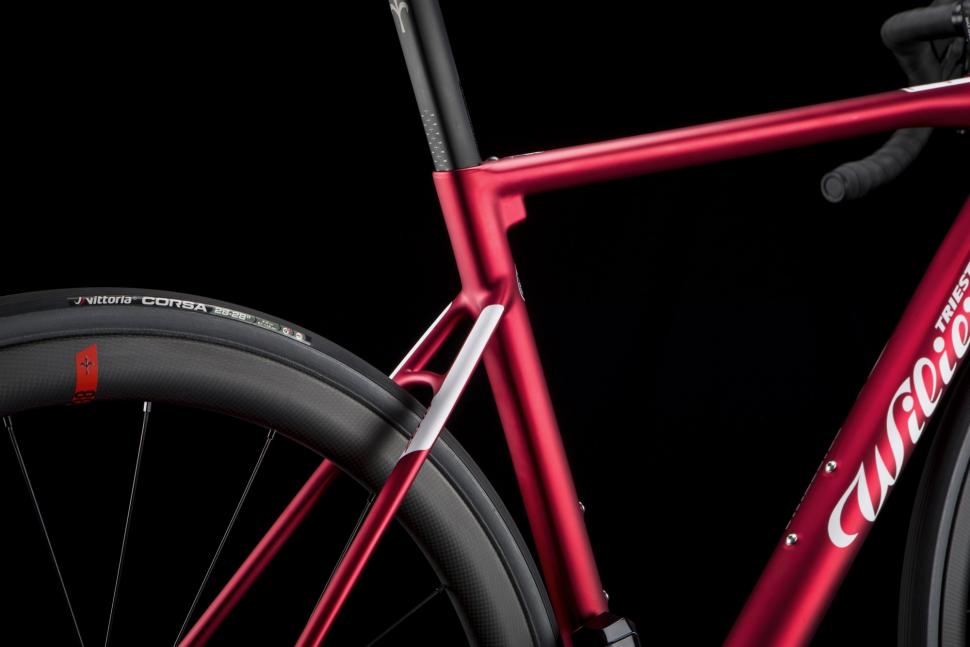 The Zero SLR uses a proprietary carbon monocoque seatpost with a D-shaped cross section: it has a rounded leading edge while the rear is squared off. It is 26mm wide and 29mm deep. Wilier says that it's more aerodynamically efficient than a round post but it isn't designed to be ultra-aero. The seatpost is available either with an inline clamp or with 15mm of setback; there's no 25mm setback version, an option that is common elsewhere. 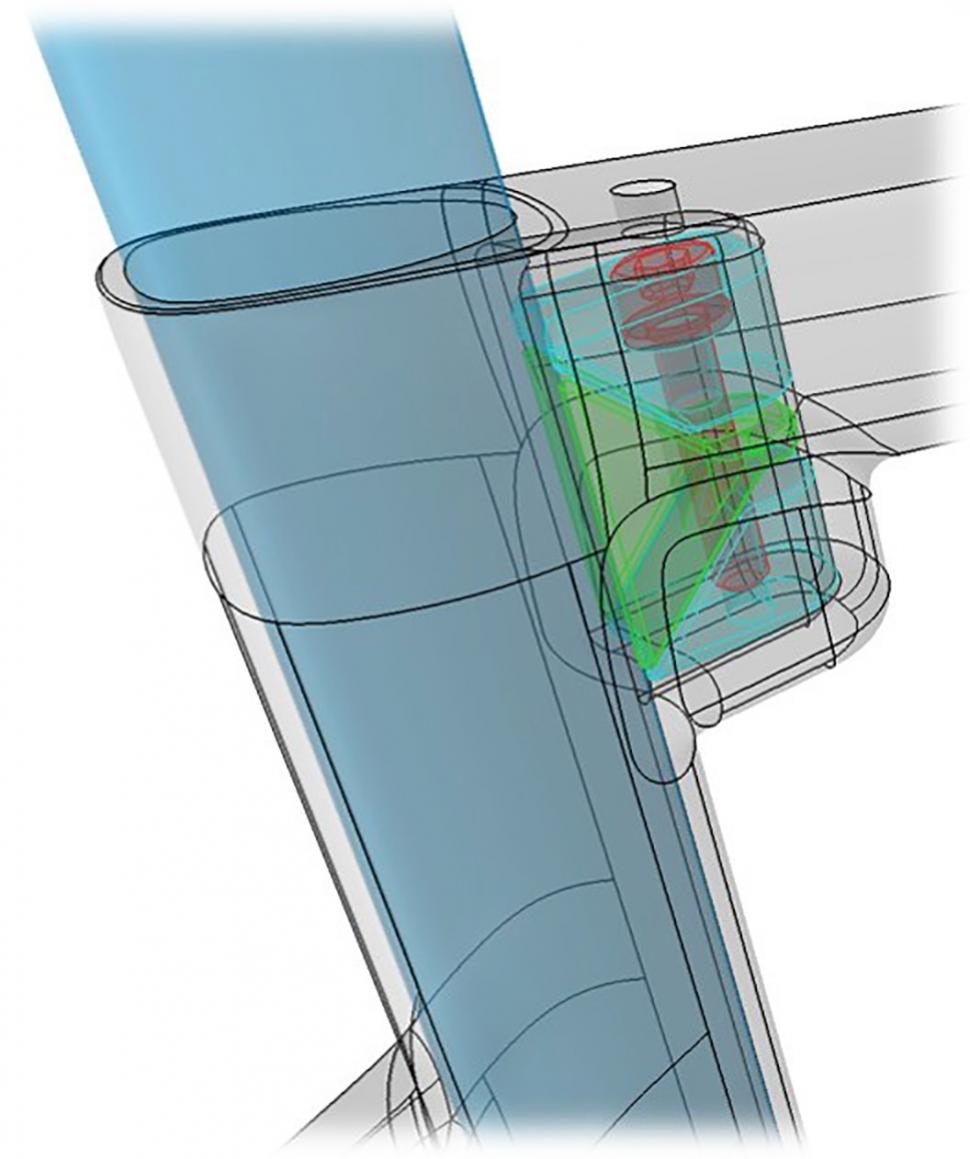 The seatpost is held in place by a wedge-type expander that's tightened by a bolt you access via a hole in the top tube. 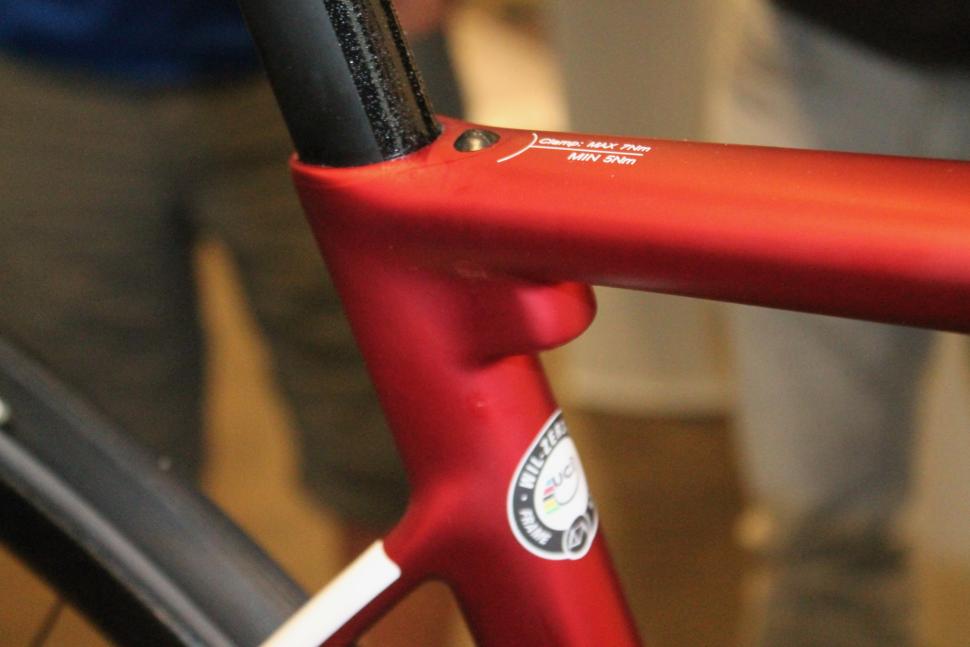 The lack of an external clamp fits well with the Zero SLR's clean aesthetic although you might feel that the step at the top tube/ seat tube junction that accommodates the expander jars slightly. 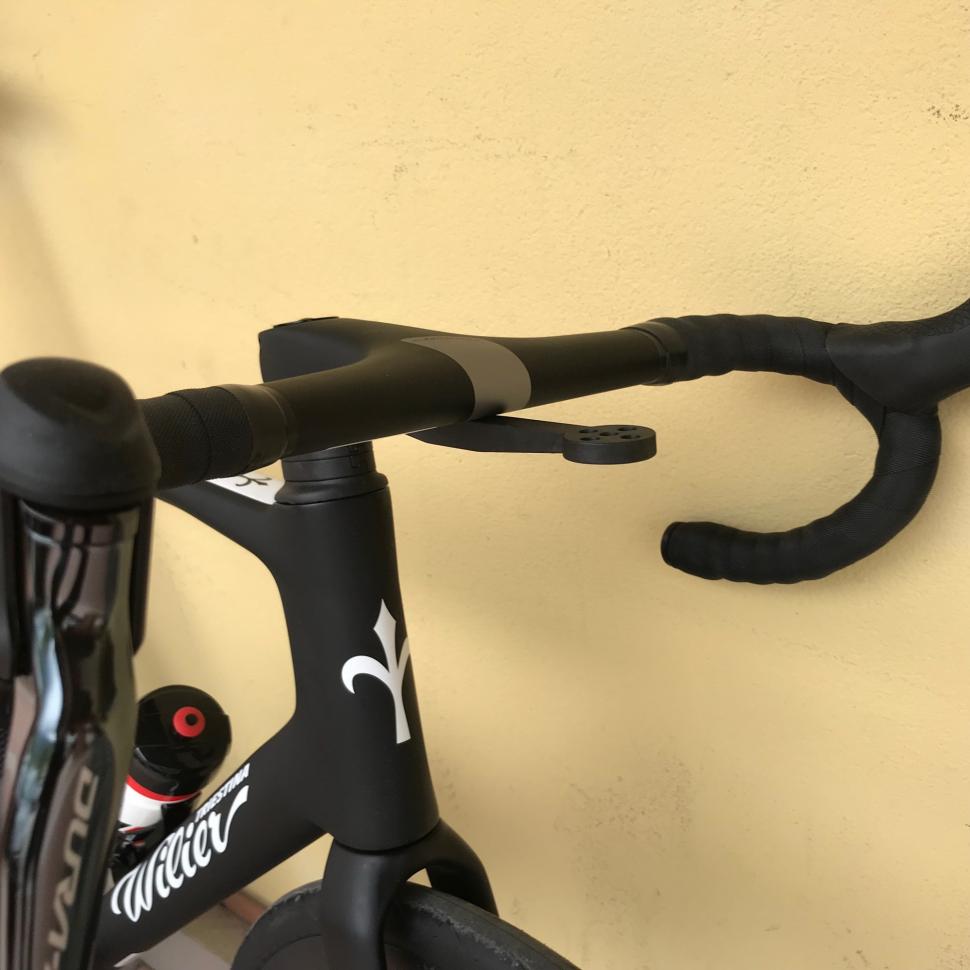 Aside from the frameset, one of the Zero SLR's key features is its integrated carbon handlebar/stem (a claimed 330g for the version in a 42cm width with a 100mm stem section) which takes the brake hoses and shift cables internally. These then run down into the frame via two-part composite spacers that lock together in use. This design allows you to add or remove spacers to adjust handlebar height without the need to disconnect the hoses or cables. We've seen similar on bikes like Trek's Madone, for example. 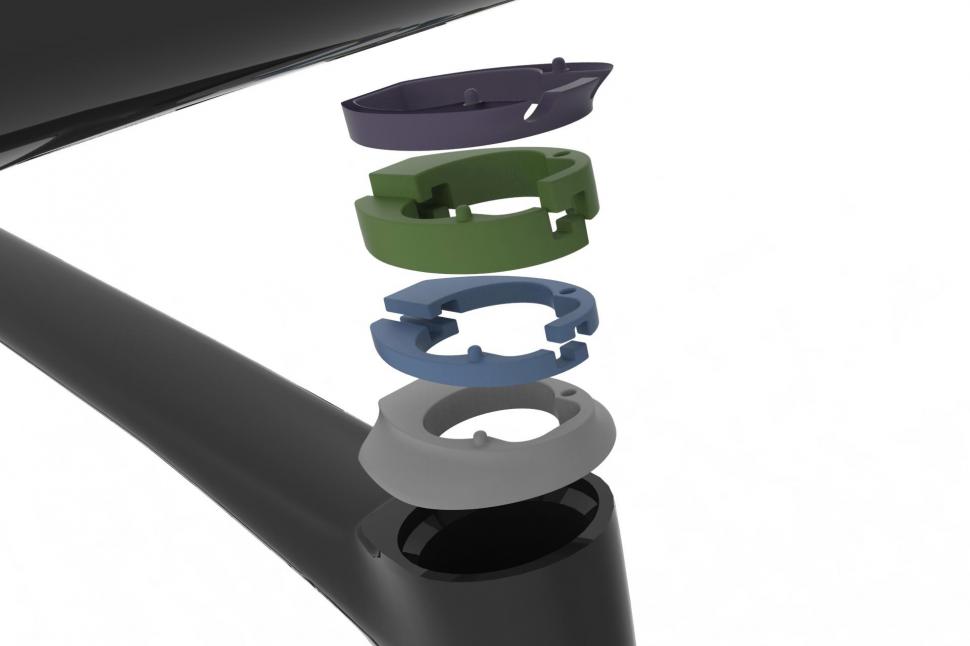 The handlebar cross section isn't round and it's not designed to be aerodynamic either – it sits somewhere in between. Wilier reckons it's an ergonomic shape. 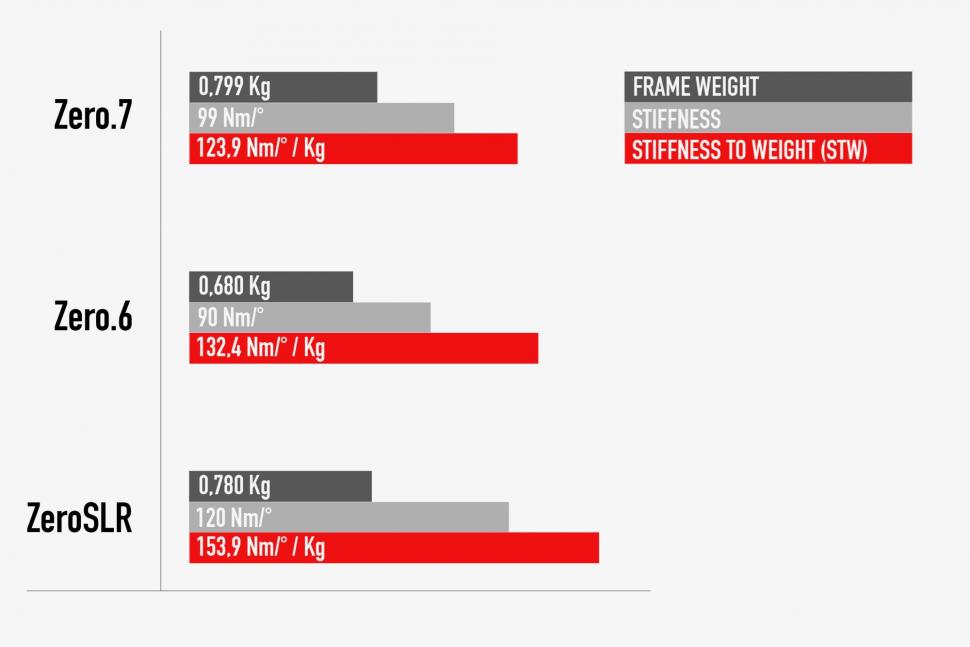 "On the Zero SLR, thanks to the blend of carbons, the unique positioning of the fibres and the construction technology, we have succeeded in attaining the highest level of both lightness and stiffness, exceeding the strength to weight value of our previous Zero.7 and Zero.6 models by 24%," says Wilier.

Check out our first ride impressions of the Wilier Zero SLR

As well as these lightweight road bikes, Wilier already has aero bikes like the Cento10Pro in its range.

"There is always a demand for lightweight bikes, whether it's aero or not," said Claudio Salomoni. "That's more challenging now because of the success of disc brakes that increase the overall weight of bikes. 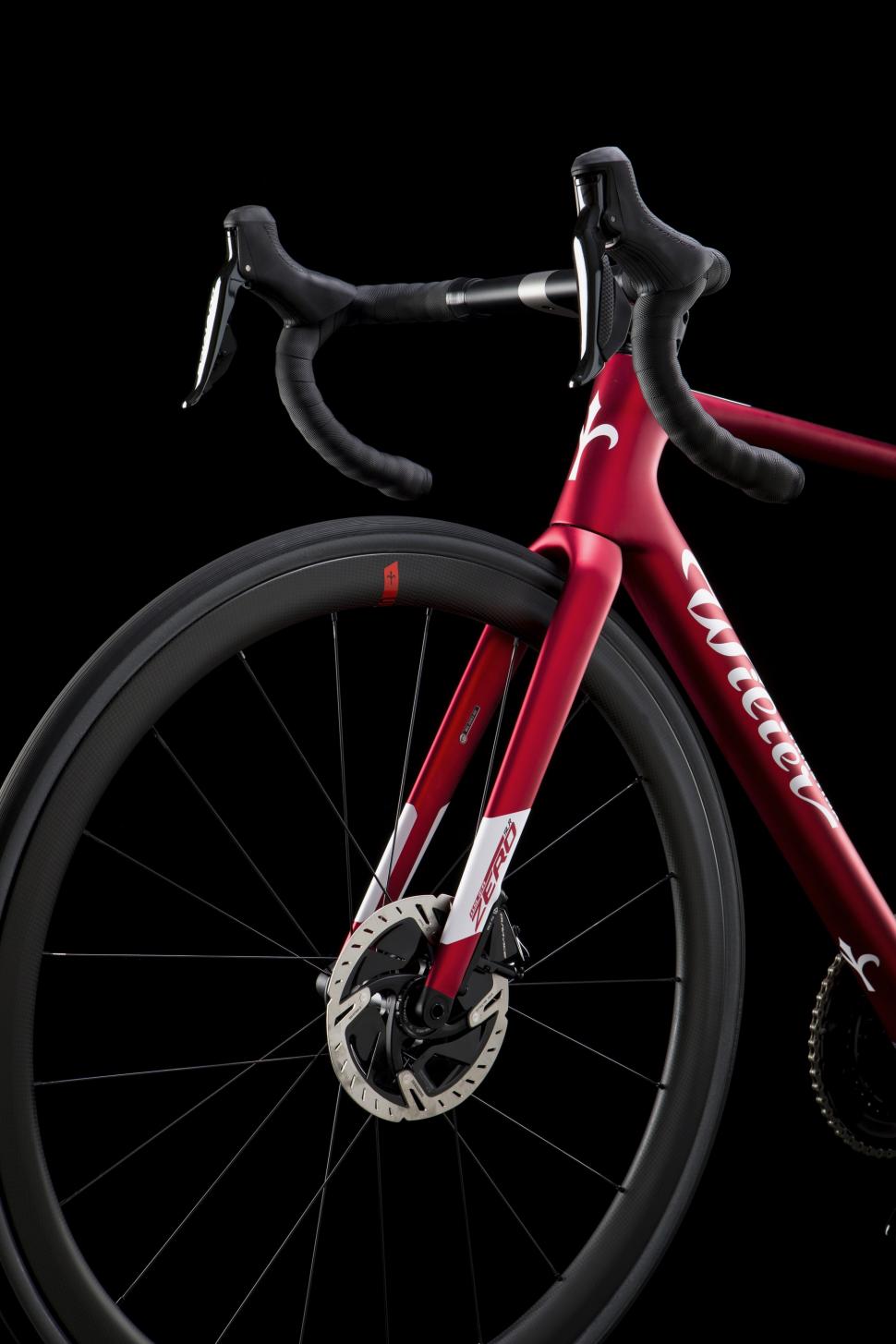 "The pros want a UCI-limit-weight bike – 100%. Any bike they use must ideally be 6.8kg [the UCI's minimum weight limit for racing]. For sure, we understand that they prefer the speed of aero bike for flat courses, and a few extra grams is not a huge problem, but they absolutely want the responsiveness and UCI weight limit of a climbing machine.

"We have already designed a Wilier Zero SLR with rim brakes, and started a pre-production version for our internal tests, but it looks like today's customer wants to buy disc brakes so there will probably be no market for the rim version.

"From the pro's point of view, a rim brake version would be below the 6.8kg limit, so 'artificial' weight would have to be added to the bike."

The Wilier Zero SLR is available in 12 different builds, all of them with either Shimano Dura-Ace/ Ultegra Di2 electronic shifting or SRAM Red/ Force eTap AXS wireless shifting; this bike isn't designed for cable-operated shifting. All models use hydraulic disc brakes. 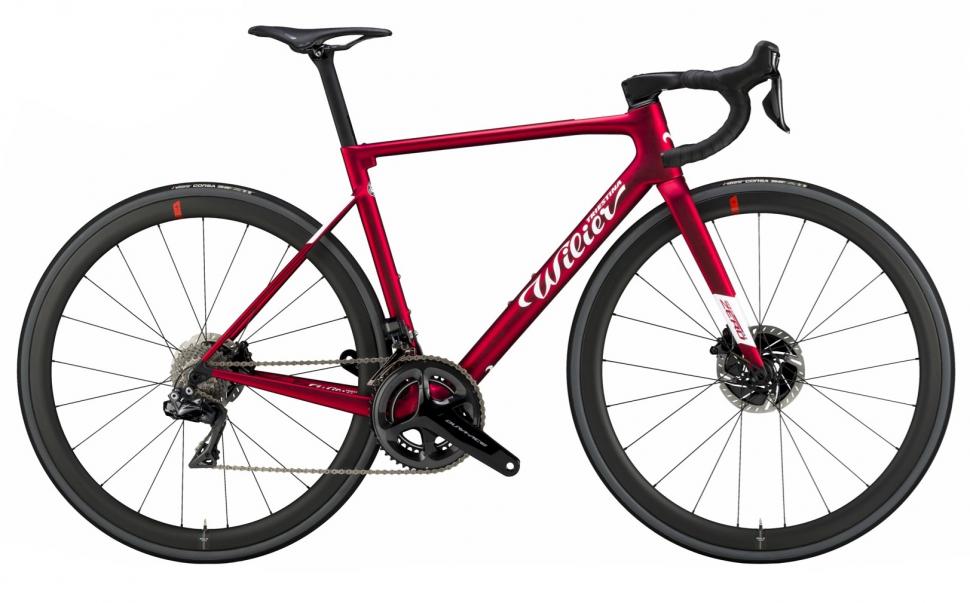 Here are details of the various builds with prices in Euros (prices in UK pounds have yet to be announced):

The Wilier wheels mentioned above have been developed in association with Miche.

Find out more about the Wilier wheels here

For more info on the Zero SLR go to www.wilier.com/global/zero-slr.