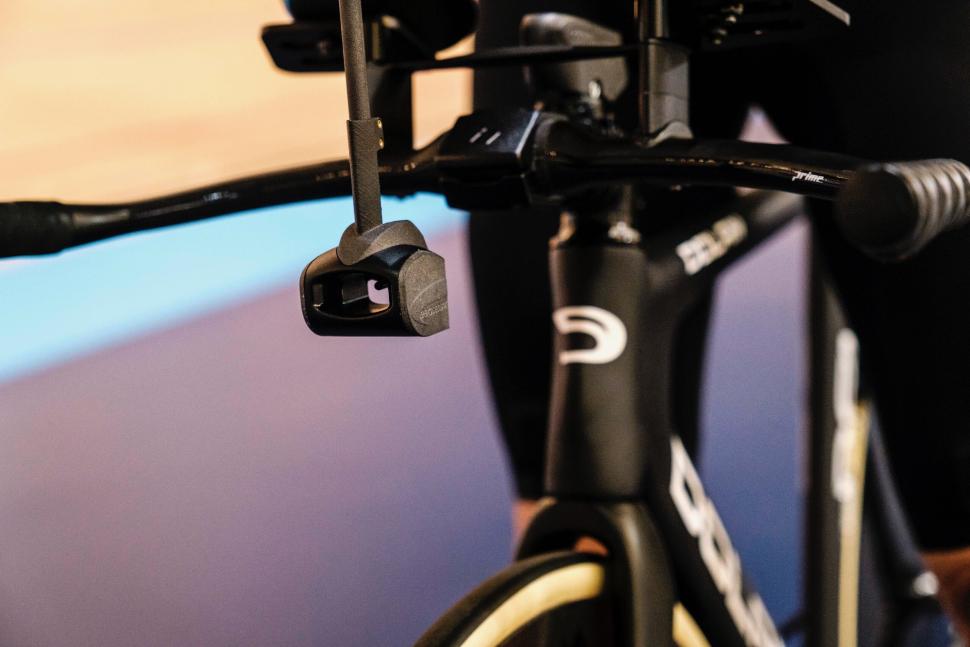 Is Aerosensor the best system for reducing drag without a wind tunnel?

The Aerosensor Aerodynamic Cycling System, designed to measure your cycling aero drag in real time on the road or track, is currently looking for funding on Indiegogo. Aerosensor products, which have the backing of Sir Chris Hoy, are expected to ship in six months.

The Aerosensor system, developed by F1 aerodynamicist Dr Barnaby Garrood, comprises three parts although you don’t necessarily need to use all of them together.

A predecessor of the Aerosensor system, the Velosense Ventos – another F1 aero expert, John Buckley, was involved in the development with Barnaby Garrood – was spotted being used by Jonas Vingegaard during the 2021 Tour de France.

As well as being the name of the company, Aerosensor is a probe that fixes to the front of your bike via a GoPro-style mount. The team behind the design says that the device “gives accurate wind speed and angle measurement in practically all wind conditions” to +/-0.1%.

You need to use the device alongside a bicycle speed sensor and power meter – so if you don’t already own both you’ll need to factor in their cost – via the widely used ANT+ wireless technology. 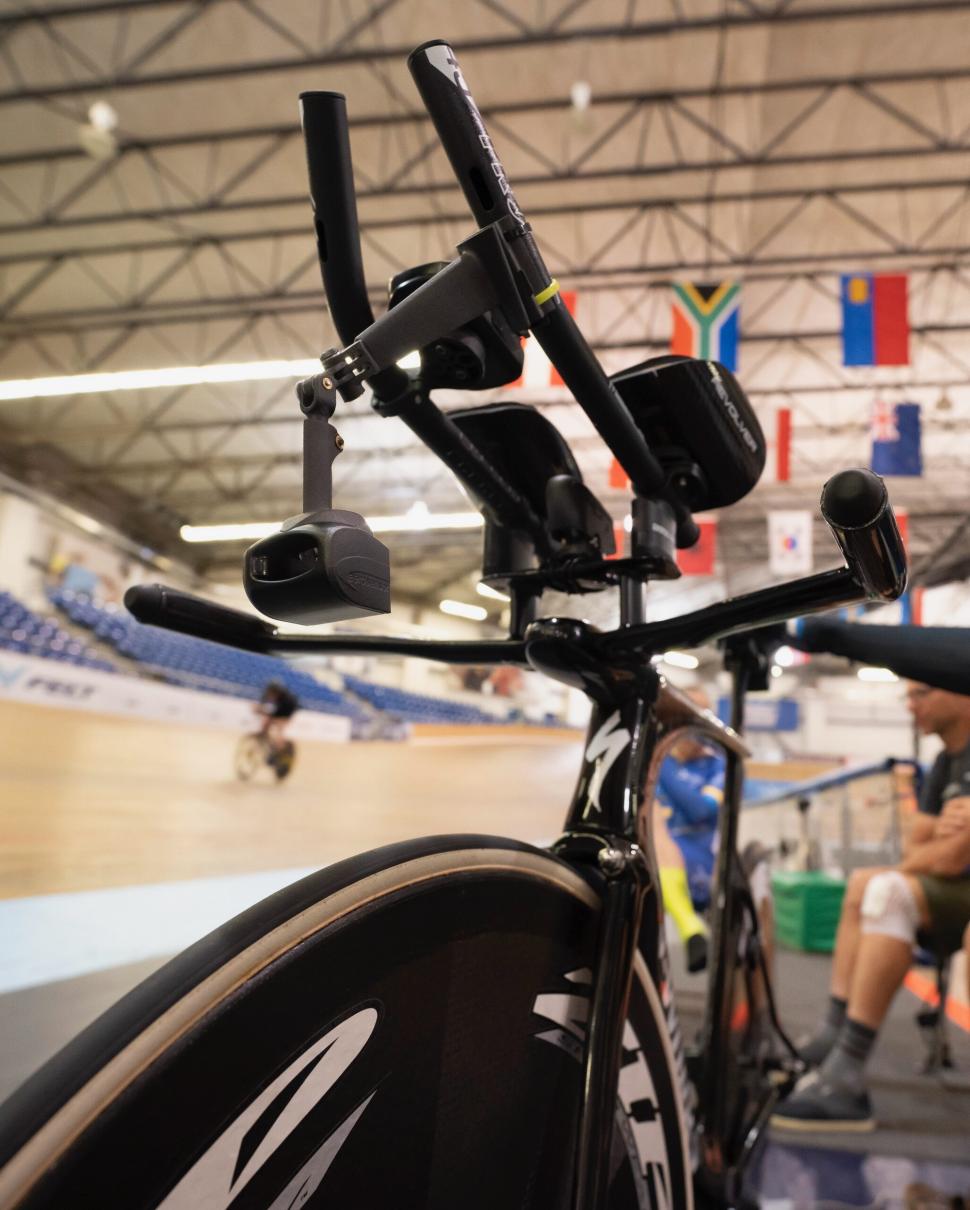 “Using the latest pressure measurement sensors, coupled with a cycling speed sensor and power meter, [Aerosensor] can measure aero drag in real-time with unrivalled accuracy: +/-1.5% on the road, and better than +/-1% in the velodrome,” it says.

How does Aerosensor calculate its figures?

“We can’t measure aerodynamic drag directly, so instead we measure all other power sources.

“We can't measure friction, but since it is a relatively small component, an estimate of tyre rolling resistance and drivetrain losses is sufficient to give highly repeatable aero drag data.” 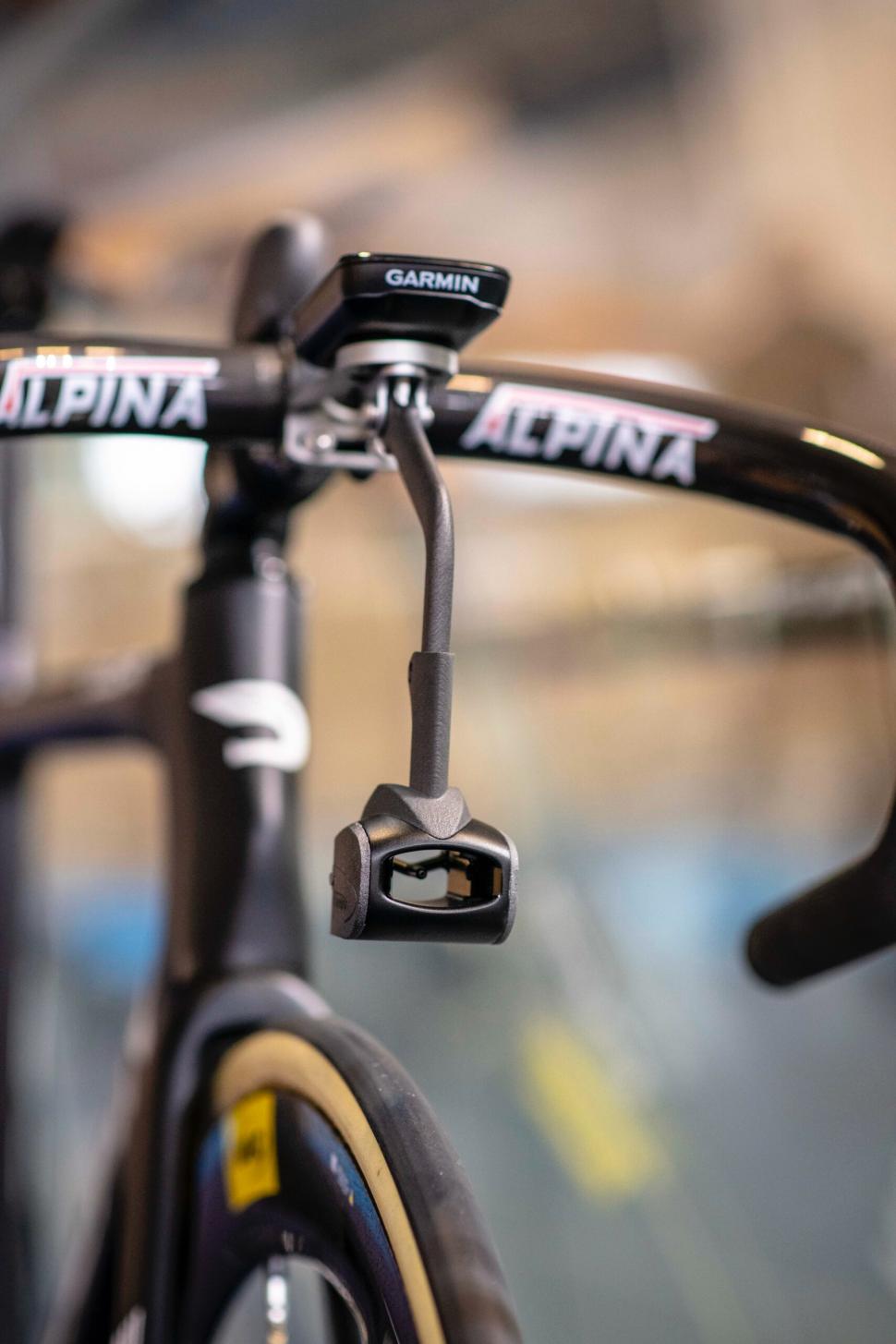 How does Aerosensor know when you're climbing or descending?

"The system uses barometers to calculate elevation, so we know how quickly you are going uphill or downhill. With the road speed, this is effectively slope. In fact, as our barometer is so sensitive, we can provide much greater accuracy on road slope than bike computers which typically have lower sensitivity barometers."

The calculated aerodynamic drag coefficient (CdA) is transmitted to a Garmin cycle computer for display and logging using an app.

Aerosensor isn’t the first device designed to offer real-time drag measurement. We tried out the Velocomp AeroPod in 2019, for example, and we’ve told you about the Notio and the yet-to-be-released Body Rocket system.

Using the Velocomp AeroPod: does the device that promises drag measurement on the fly deliver?

How does Aerosensor differ from other products out there?

“There are two main things,” says Barnaby Garrood. “The first is that we measure wind yaw angle up to +/-50° with our patented probe design, meaning not only that we measure the angle, but we also use that to compensate the wind speed measurement. Current aero meters in the market use simple pitot tubes which give poor results above 5-10° yaw.

"Secondly, our system is much easier to use than current aero meters in the market. You need no special software or phone app. You download our Connect IQ app to your Garmin, pair it to the devices and that’s it. The Connect IQ app is used to change settings etc.”

Aerosensor says that the development of the device took 185 design iterations, 21 wind tunnel sessions, and “countless computer simulations” to get right. You can check out the patent here. So what’s so special about it? 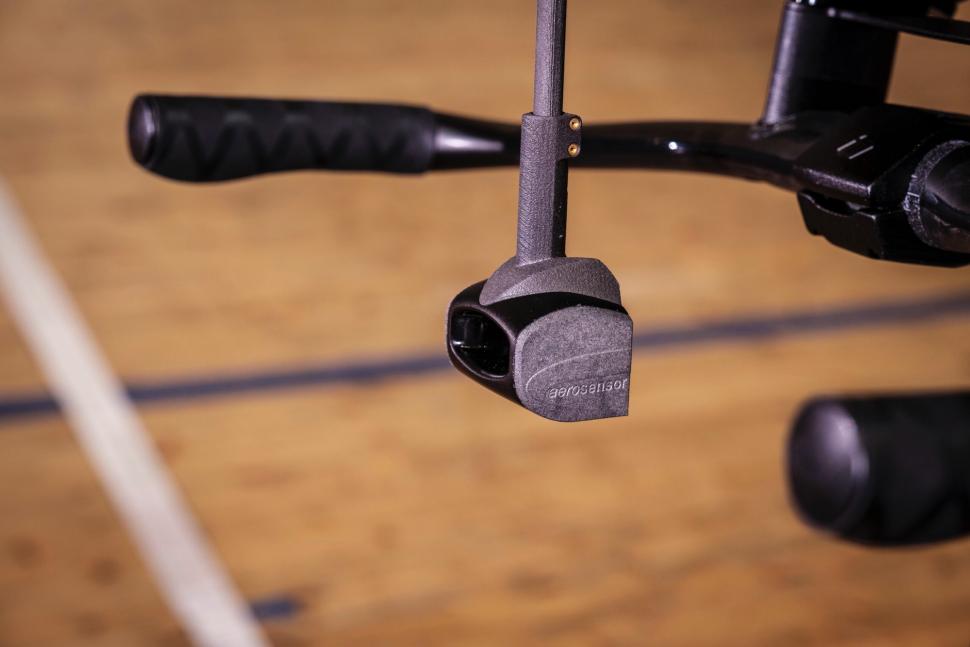 “The probe is designed so that the duct turns the flow onto the duct axis, so the central pressure measurement [marked ‘PT’ in the image below] is always seeing head-on flow. That gives us what is known as “total pressure”.

“At the probe inlet, we measure pressure on the left (PL) and right (PR) surfaces, and the difference between them gives us a measure of wind yaw angle. 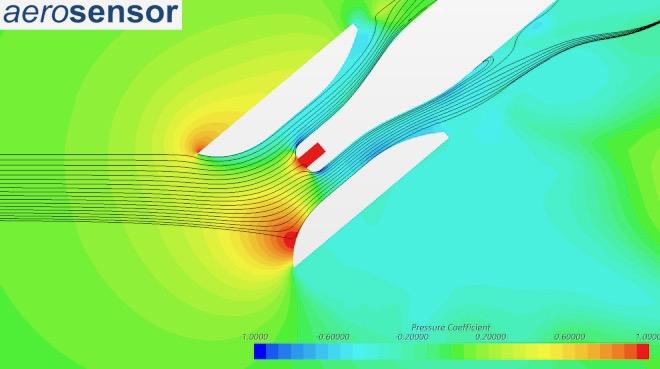 “You can use all three pressures to calculate dynamic pressure, which is a function of wind speed.

“This image shows a simulation of a typical probe at 40°. Red is high pressure, blue is low pressure.”

Interestingly, Aerosensor reports that two F1 teams are racing with a miniature version of its device this year “because it is so much better than existing probes.”

The Aerobody is entirely different and can be used independently of the Aerosensor. It uses “safe infra-red laser devices” to measure the distance from your bike’s stem to your head and chest. 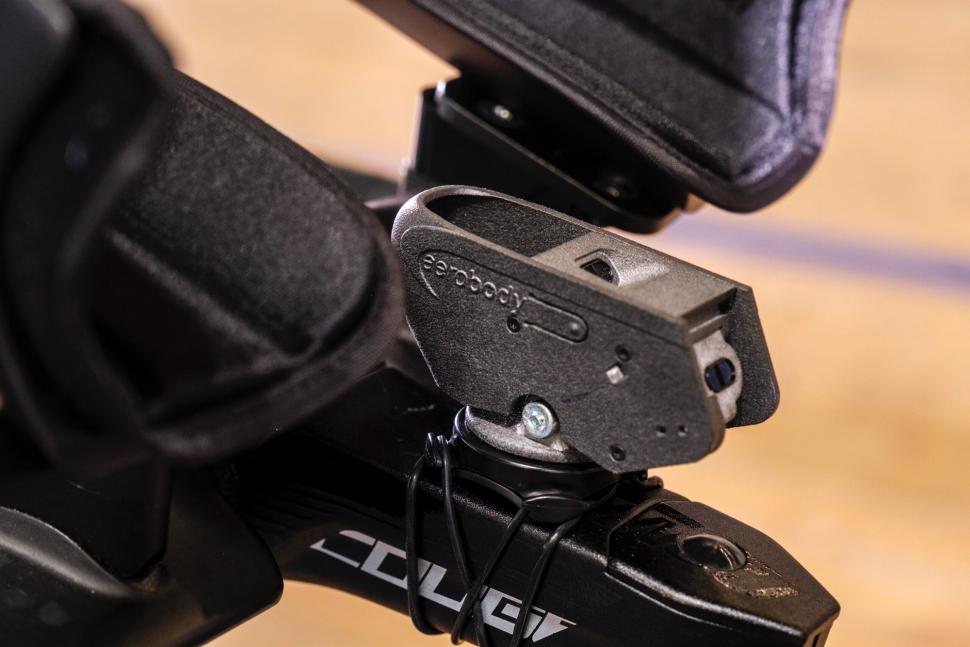 “This data is displayed on your Garmin via our Connect IQ app and recorded to the FIT file for post-ride analysis,” says the Aerosensor team.

The idea is that you can alter your ride position to minimise drag as you ride. Colour coding of the display indicates whether you are on target, too high or too low – so you get a warning if your body position changes as you get tired, for instance, allowing you to make adjustments immediately.

The Aerodrome is a wireless lap/route timer that can send info direct to Aerosensor – it requires Aerosensor to work – “facilitating accurate lap averaging, and giving instant feedback to the rider.” 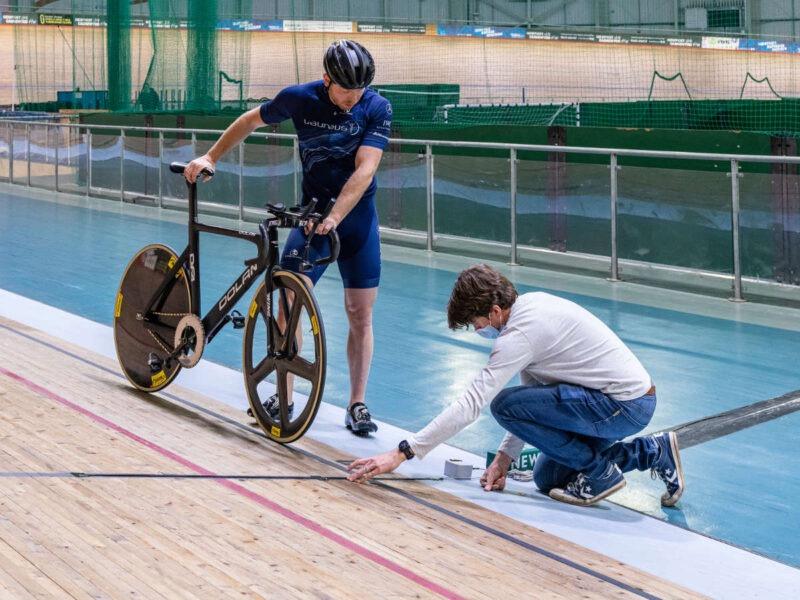 “This drag and time data are transmitted to the Garmin for instant feedback to the rider via our Connect IQ app, and recorded to the FIT file for post-ride analysis,” says the Aerosensor team.

Aerodrome features a pressure-sensitive strip that you tape to the road or track surface.  As soon as your wheel presses on the strip, the time is transmitted to Aerosensor. The idea is that you can see your data lap by lap as you ride.

To be in line for an Aerobody body position sensor, assuming this project meets its funding target, you need to pledge at least £188 (RRP is £250).

To be in line for an Aerosensor aerodynamic device you need to pledge at least £563 (RRP is £750).

To be in line for an Aerodynamic Cycling System – Aerosensor, Aerobody, and Aerodrome – you need to pledge at least £844 (RRP £1,125).

Other 'perks' are available. Going through a crowdfunding site is not the same as buying from a retailer.