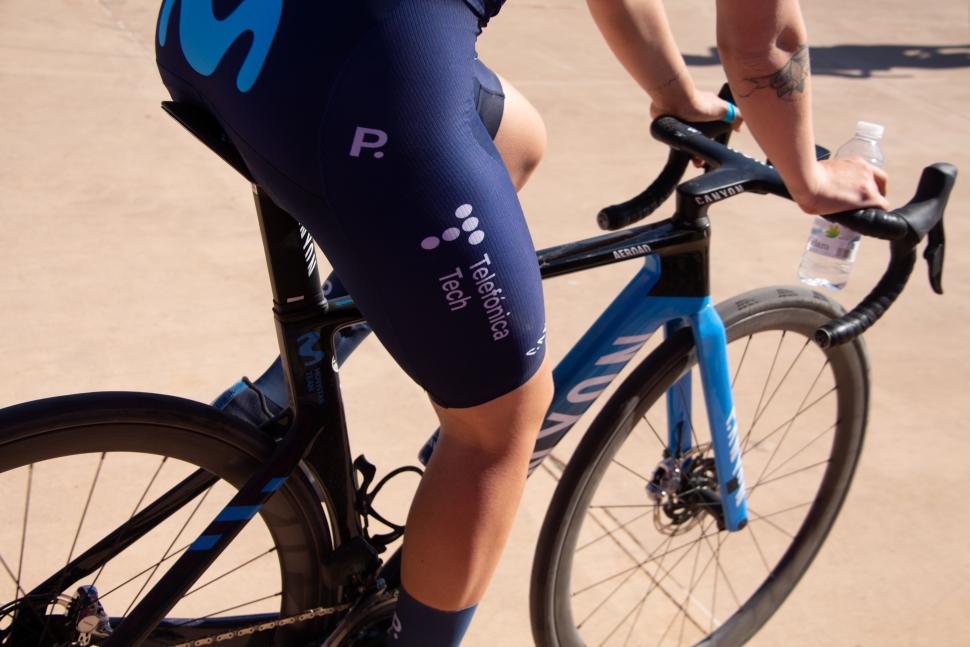 The best bikes of the 2022 Paris-Roubaix Femmes

The Paris-Roubaix Femmes has moved into its 2nd year and just like the first, the race gave us some brilliant bikes to go with the exceptional racing. Here are some of the best bikes that we spotted.

Above is the gallery with all of the images, but scroll down for our observations.

Emma Bjerg nearly made the winning move and she was visibly gutted at the finish. Her Movistar Canyon Aeroad has very few alterations for this race. Just some big tyres needed. Runner up on the day, Lotte Kopecky's Specialized S-Works Roubaix bike was sporting SRAM Red eTap AXS, Zipp wheels and huge tyres. These look like tubular to us, which isn't very common these days. 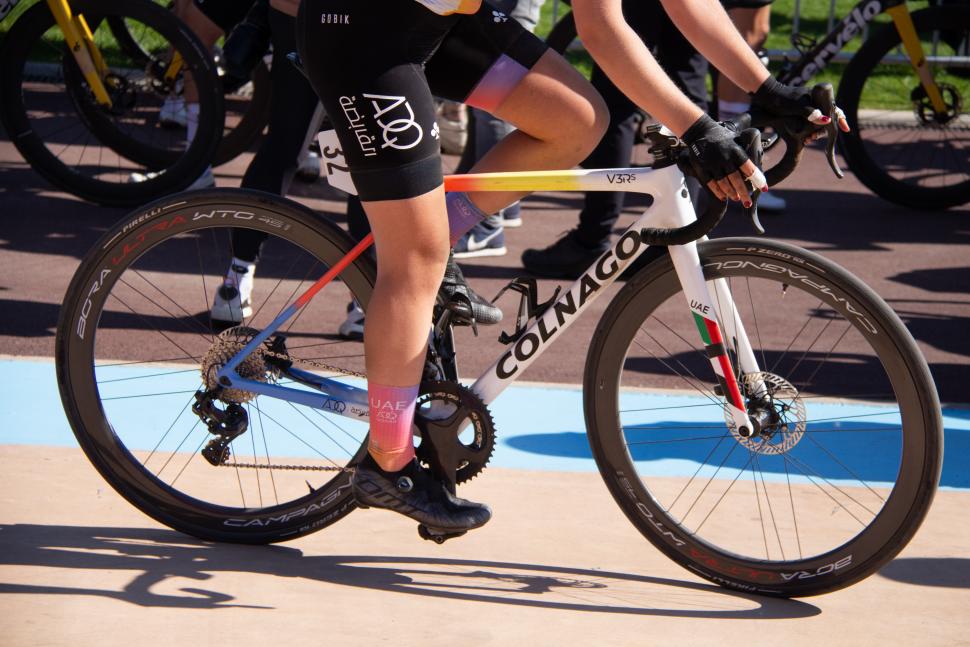 It's almost wrong to ride such a beautiful bike over the cobbles here. While the team started the year on mechanical drivetrains, they've upgraded to EPS. The Bora Ultra WTO wheels are mega expensive. 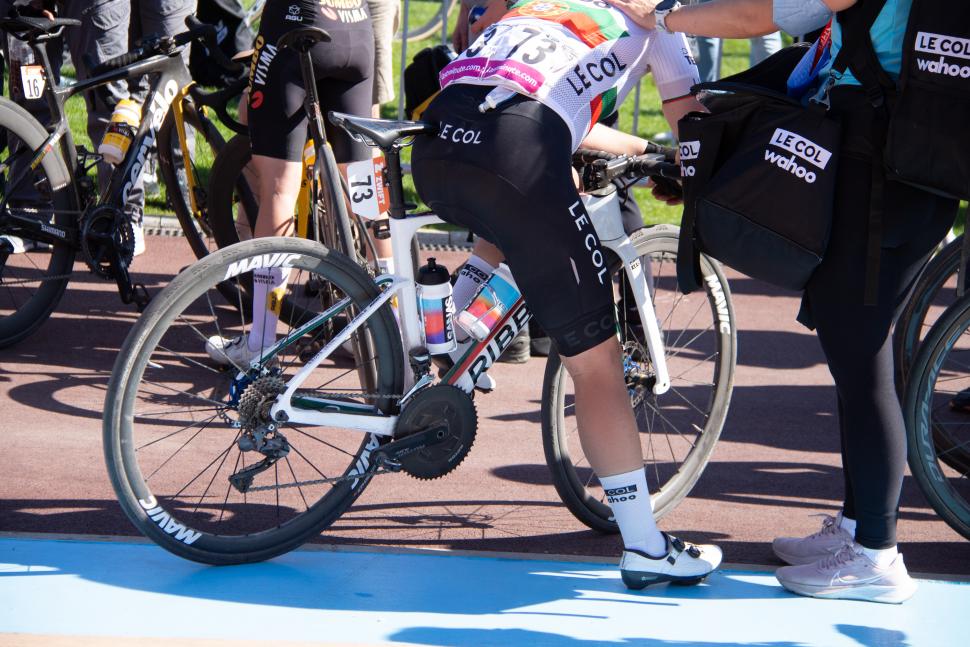 Le Col Wahoo's Ribble bikes. The British outfit gets Ultegra Di2, which helps with reducing costs while not adding much weight. The team is sponsored by Rotor for their power meters, Mavic for the wheels and Continental for the huge GP5000 tubeless tyres. 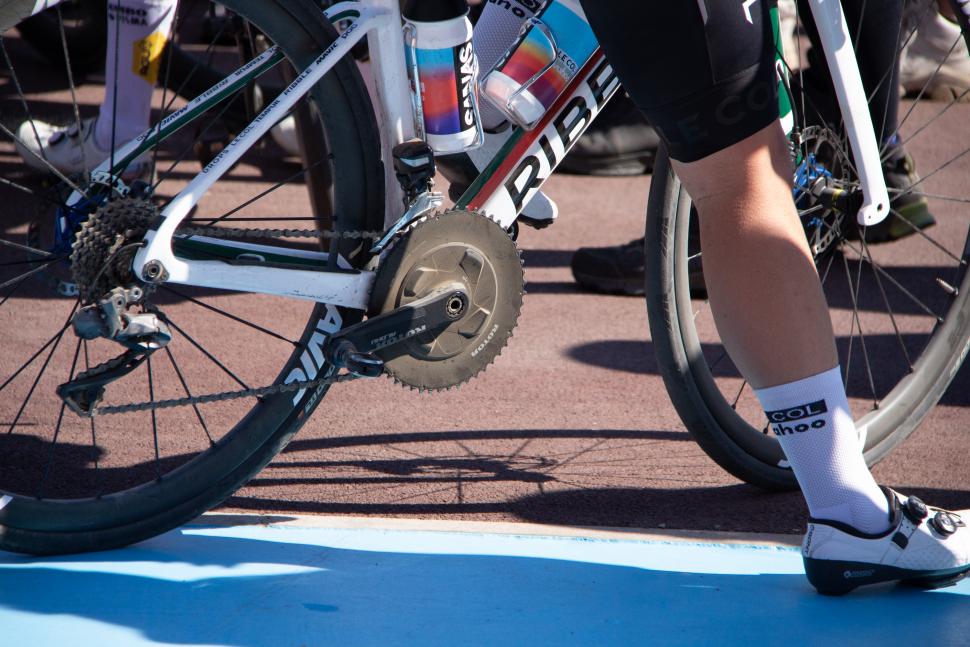 A closer look at that drivetrain shows a solid Rotor outer chainring and just how dusty it is in a dry Roubaix. The bikes can handle it, but we heard a fair few dusty cardio coughs at the finish. The lungs might take a few days to recover. 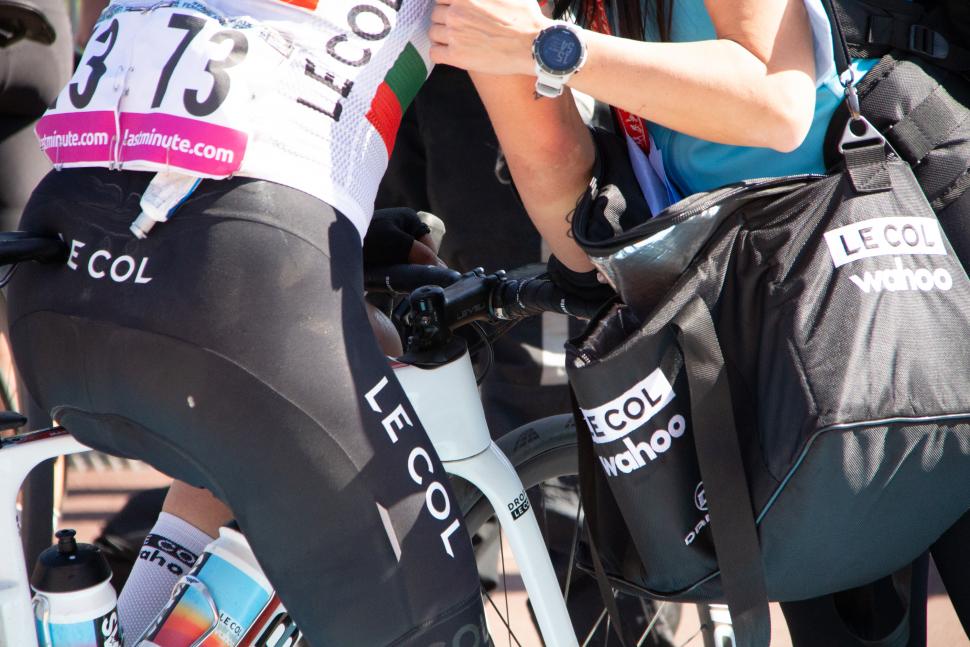 While the Ribble can come with an integrated front end, the Le Col Wahoo riders get a standard two-piece stem and bar combo. 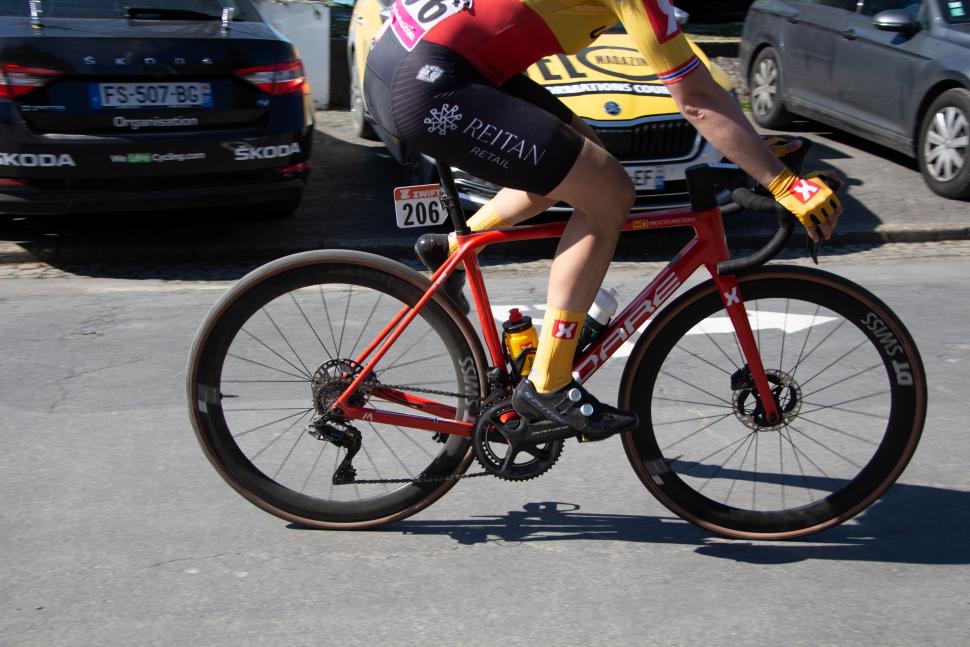 Uno-X were rather unlucky today with two of their riders coming to grief on the same section of cobbles. Their Dare bike isn't one that we've seen in the flesh before, but it is a case of one road-race model for the whole team. They use Shimano's Dura-Ace R9000 groupset, so it's 11-speed for now. 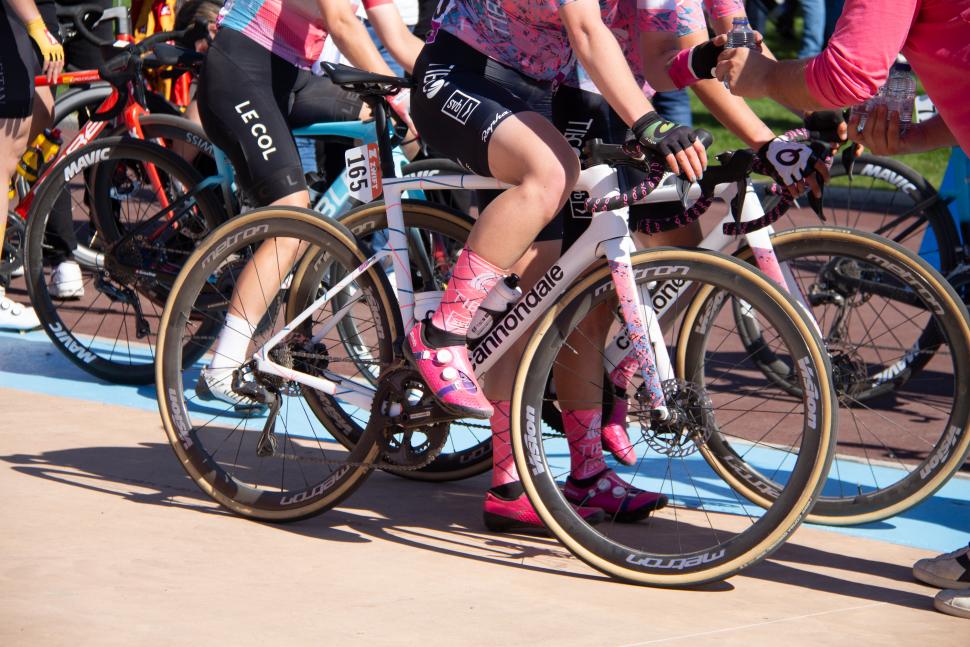 Cannondale's Supersix was ridden by the whole of the EF team and we'd expect to see the men's team on the bike too. American Coryn Rivera is a diminutive rider but it's hard to appreciate just how much of a pocket rocket the sprinter is until you see her in person. Her bike is a giveaway though. That setup is what can be described as 'compact'. 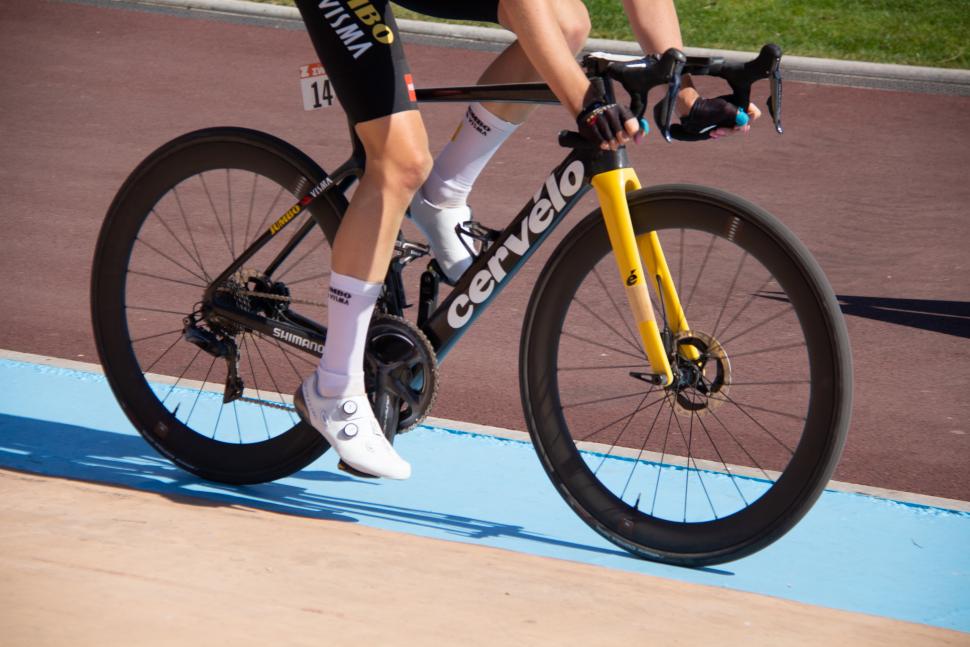 Compare it to her team mate's bike for the size difference. Jumbo-Visma's women's team get the older 11-speed Shimano kit.

Liv have some of the nicest paint jobs in the peloton this year and they finish the bikes with Giant's own CADEX wheels and SRAM's Red eTap AXS groupset. 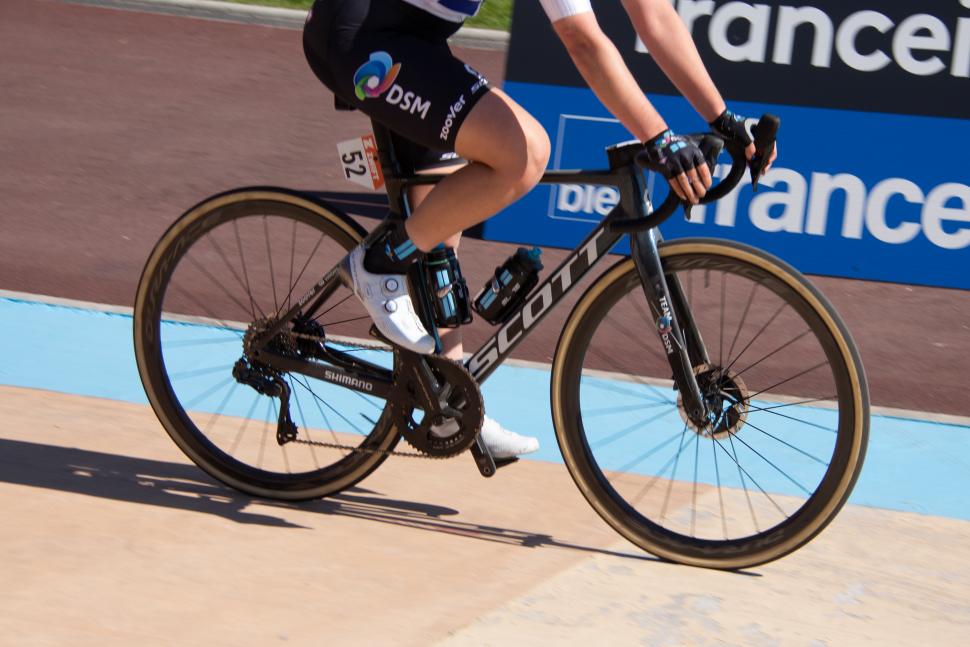 Pfeiffer Georgi of Team DSM is the British National Champion, not that you'd know it from her bike, which is stock standard team issue. That's not such a bad thing though as the team DSM Scott bike is decked out in the latest Shimano stuff. Georgi finished in an impressive 9th place. 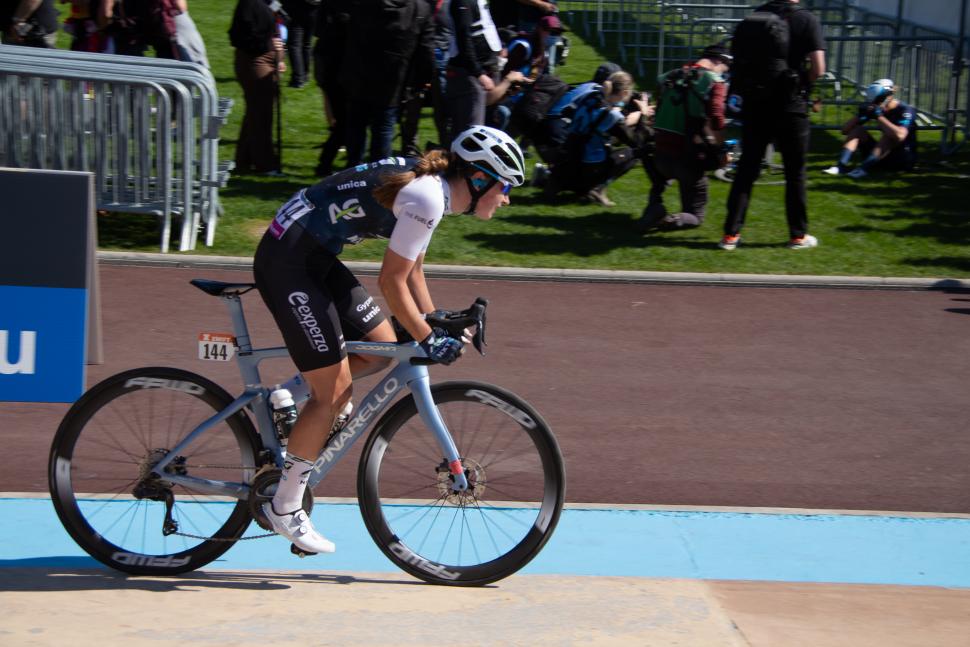 This AG NXTG rider was all alone on her ride around the velodrome. This is another lovely setup. The Pinarello Dogma F12 Disc sports a Shimano Dura-Ace 12-speed groupset and FFWD wheels. 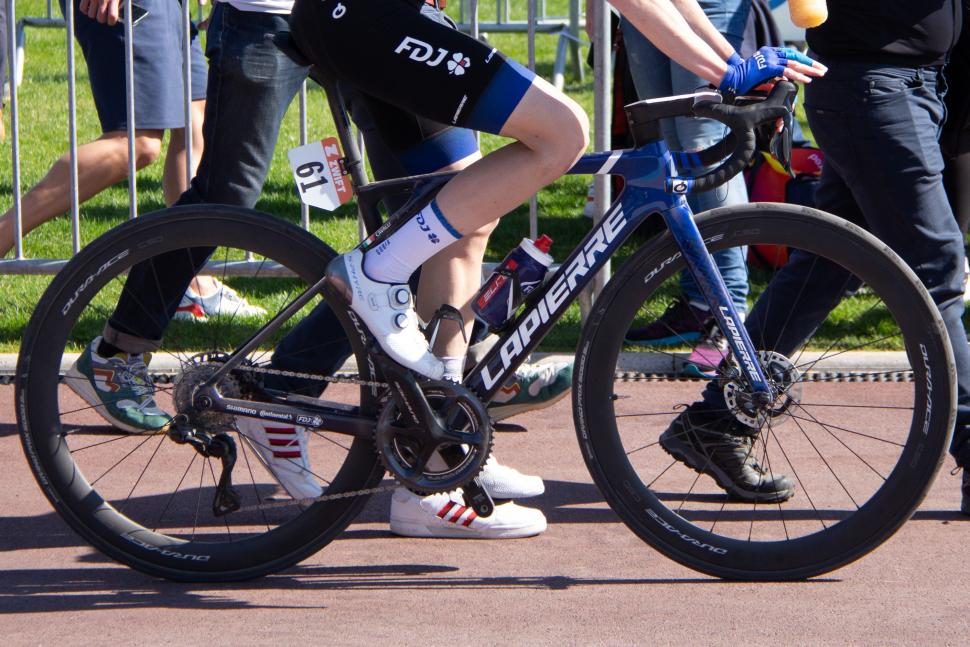 Groupama's riders are on identical bikes as the men's team. That means they get the 12-speed Shimano Dura-Ace groupset and the latest tubeless-ready wheels. It's a very nice setup. 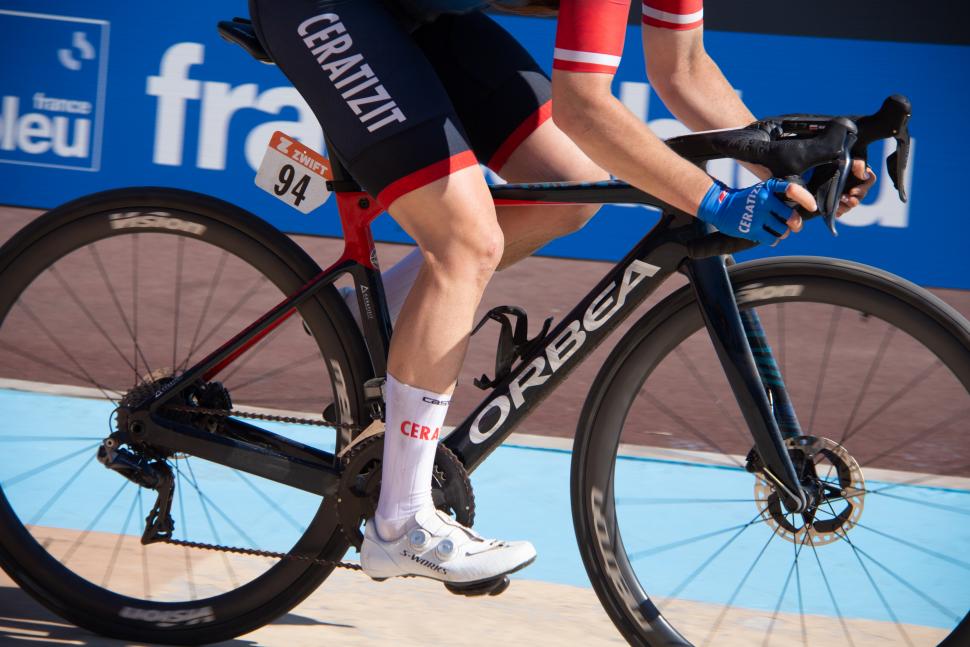 This Orbea shows that not all teams can afford the latest 12-speed Shimano kit. The Vision wheels were a common sight but we saw even more of the Vittoria Corsa TLR tyres. They seem to be the go-to choice. 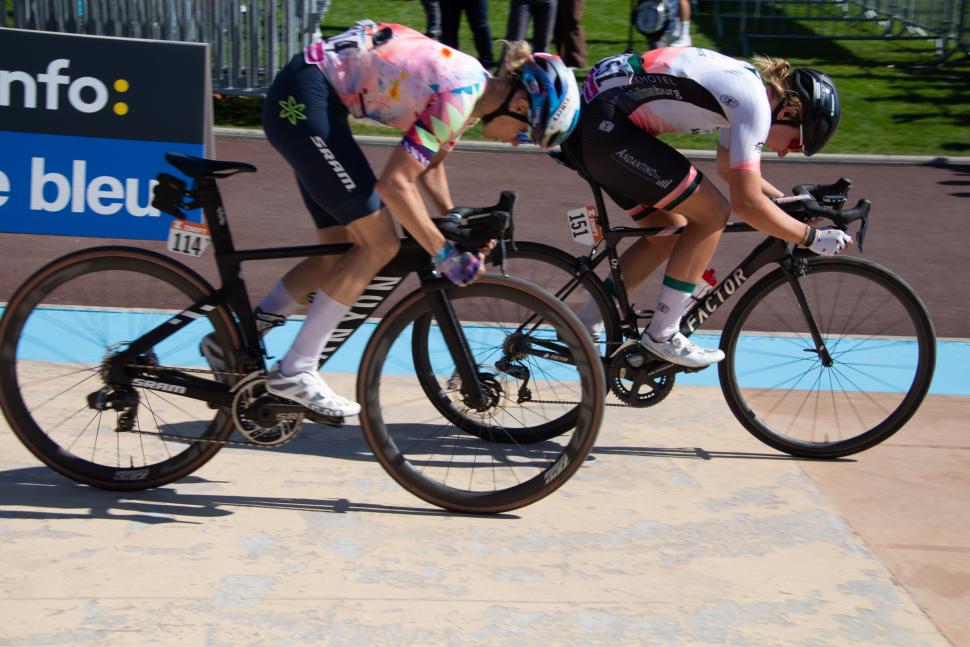 One sprint, two different bikes. The Canyon Aeroad is, as the name suggests, an aero racer. The Factor O2, meanwhile, is more about going uphill. Both bikes got their riders to the finish, however, so both did well. 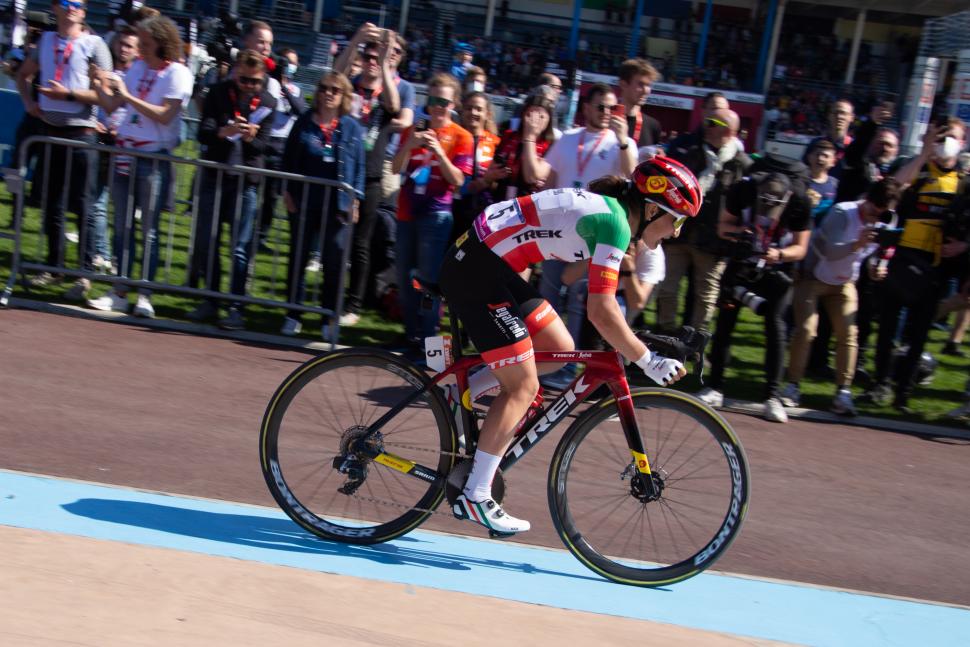 But no one could catch this flying Italian. You can read more about the new Trek Domane which won on its very first outing.

Stay tuned for tech from the men's race later today...