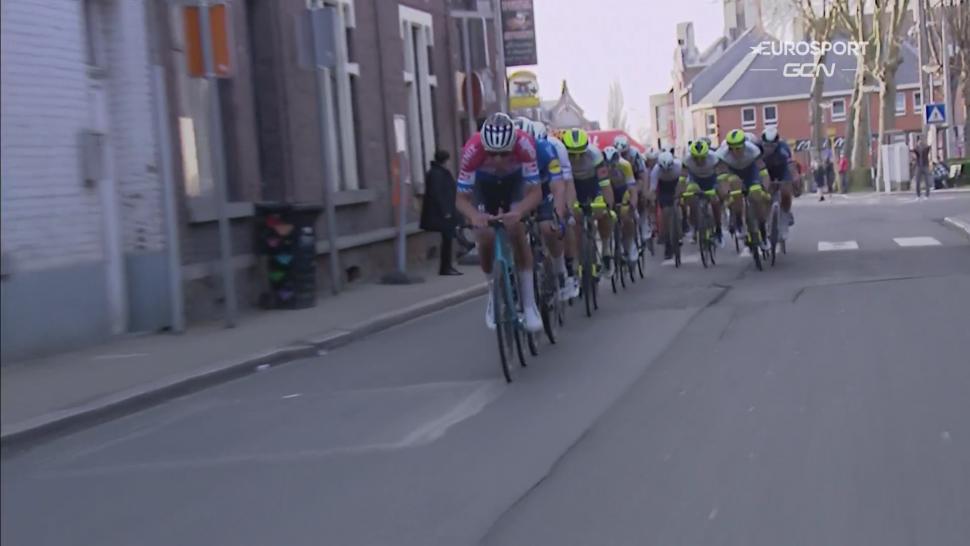 Mathieu van der Poel's broken Canyon Aeroad bar could have been caused by collision with car, claims his father

Canyon says bikes with the CP0018 and CP0015 handlebars should not be ridden while it investigates the cause of the failure; but Van der Poel snr thinks the bike might not be to blame
by Liam Cahill

In the final two kilometres of the cobbled one-day Le Samyn road race, Alpecin-Fenix’s Mathieu van der Poel was seen tossing a part of his handlebar to the pavement. While the cause of the failure is not yet known, Van der Poel's father says that his son hit a car in the Kuurne-Brussels-Kuurne race a few days previous, which he suggested could be the underlying issue.

It hasn’t been an easy first few months in the life of Canyon’s top-end aero race bike, as the 'stop riding' order comes shortly after some users complained of excessive wear to the seat post of the same bike.

In the final cobbled sector at Le Samyn, Van der Poel jumped on an attack by Deceuninck Quick-Step’s Florian Senechal; but unlike the attacking rider that we know Van der Poel to be, on the wheel of Senechal was where the Dutch Champion stayed. A few kilometres later and it was clear to see why.

Coming out of that final cobble sector, Van der Poel’s right shifter is noticeably lower than his left. In an interview with Wielerflits, the cyclocross superstar revealed that the problem had occurred on “that long cobblestone strip.”

The issue forced Van der Poel into a blocking role for teammate Tim Merlier who was in the group behind: “It was actually silly that I had to play blocker there but I had no other choice. If my handlebars were normal, of course I would have ridden along", he said.

That blocking role saw Van der Poel refusing to work in the front group, and eagle-eyed viewers spotted him first showing Senechal the broken bar. As the problem got worse, he tossed the carbon drop to the side of the road.

As he crossed the line, celebrating Merlier’s victory, Van der Poel’s shifter can be seen swinging from the bar (first picture); although the absence of the titanium shifter clamp led to some questions about the cause of the failure.

CyclingTips’ James Huang suggested that the failure had nothing to do with the bar itself, but was caused by an overtightening of the shifter clamp. This theory was supported by a photo of the area which appears to show the shifter with a sheared off clamp.

I've looked at all the photos, and can conclusively say that this is the fault of the disc brakes.

Others, naturally, blamed the disc brakes.

But, speaking to Sporza's post-race show Extra Time, Adrie van der Poel claimed that "in Kuurne-Brussels-Kuurne he hit a car with the same [handlebar that he used in Le Samyn]. And in Le Samyn he went into a terrible hole and then his handlebars broke. I don't think it's a structural problem. Everyone rides that bike."

Whatever the cause, as we reported last night, Canyon made the following statement:

“On Tuesday 2 March, at one of the opening classic races "Le Samyn", a part of the handlebar of our Alpecin-Fenix pro Mathieu van der Poel (NED) quite obviously broke off during the race.

“Experts from the Canyon development and quality management departments immediately began analysis and testing to understand the cause of this incident. The affected cockpits (CP0018 and CP0015) only installed on the current Aeroad models CF SLX and CFR. The Aeroad CF SL model is not in any way affected by this issue.

Canyon's founder Roman Arnold said: "Mathieu fortunately did not fall. We want to ensure with absolute certainty that no one comes to harm before we fully understand the root cause.

Canyon's CEO added: "We are doing everything we can to equip affected Aeroad models as quickly as possible with a cockpit that meets both our and our customers’ demands for total quality and safety.”

The statement ends: "It has already been decided that all professional teams will switch to alternative bikes with immediate effect. Until further notice, the pro sport athletes will be using the previous model of Aeroad or the current Ultimate."