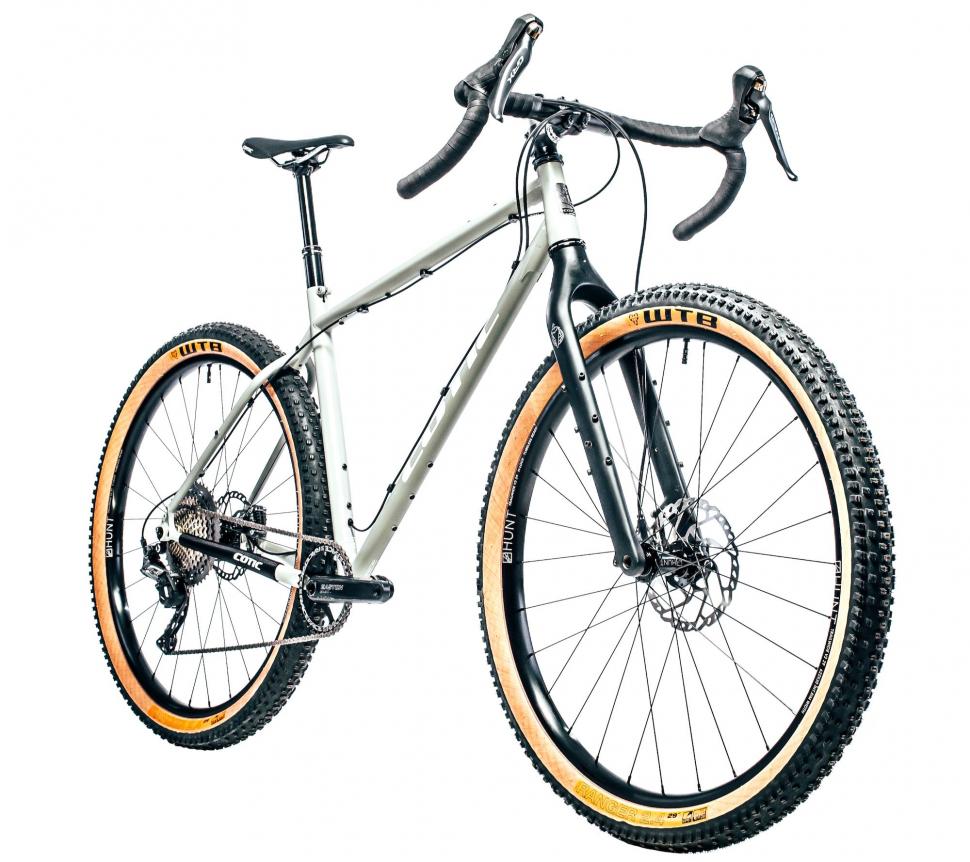 Cotic has unveiled a new drop-bar adventure bike called the Cascade, made with butted Reynolds 853 steel main tubes and designed for everything from fast gravel rides to heading off into the back of beyond for days on end. 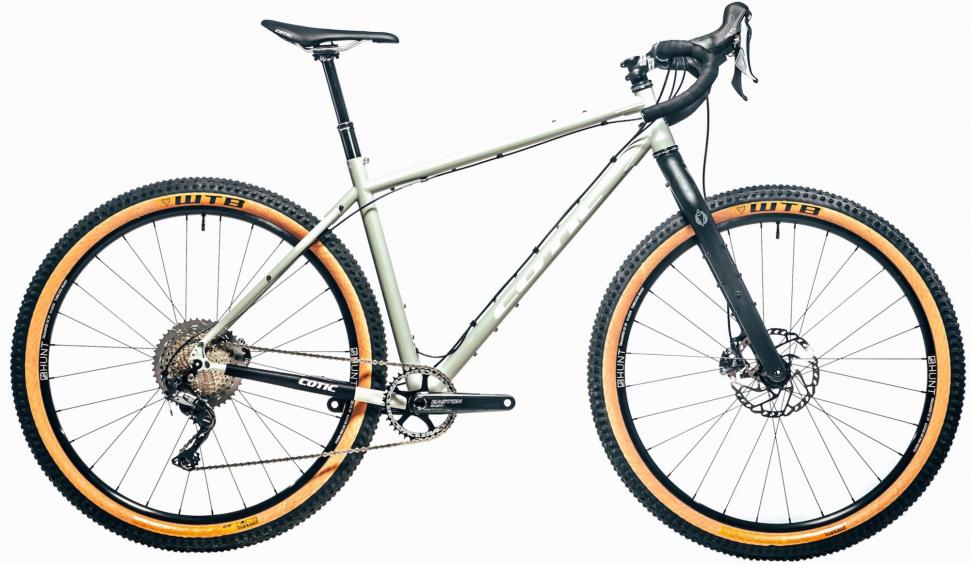 “The Cascade is… a gravel bike, drop-bar dirt bike, bikepacking rig, adventure vehicle and probably a bunch of other things we haven't thought of yet,” says Cotic.

“We designed it to have the fewest compromises so riders can go the furthest. It drops neatly into that space between our super capable SolarisMAX mountain bike and our road/gravel Escapade. Cascade surfs around the grey area between tarmac and trail with the kind of progressive, confident handling you would expect from Cotic.”

Read our review of the Cotic Escapade here 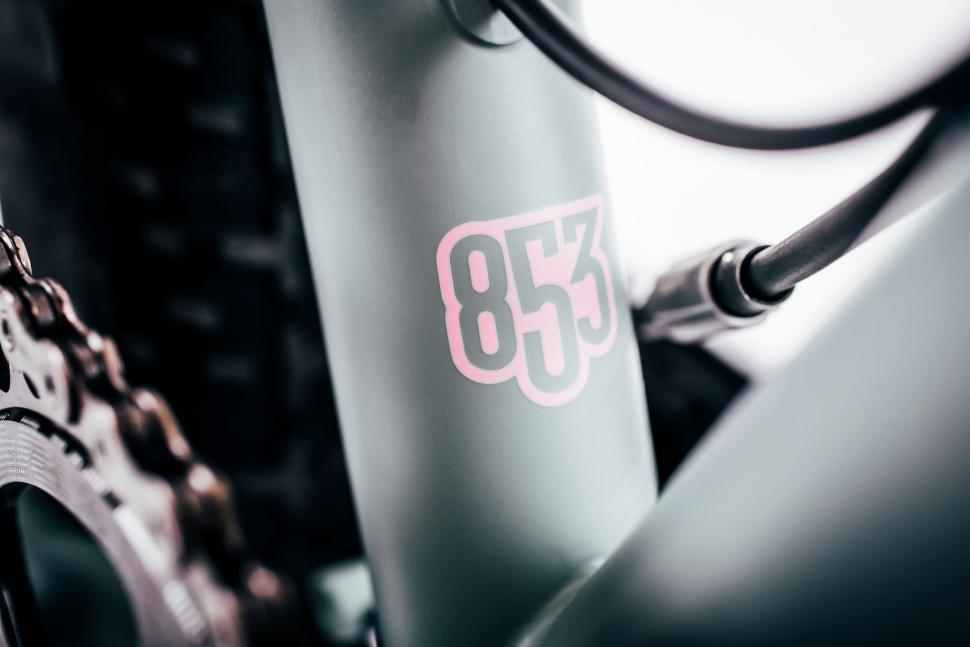 The Cascade boasts a Reynolds 853 steel mainframe – 853 being high-end stuff –with a bespoke Cotic Alpaca heat treated cromoly fork (although you can opt for a Salsa Firestarter Deluxe carbon or Rockshox SID SL Ultimate 100mm suspension fork if you prefer).

It has mountain bike Boost spacing (148x12 axle) at the rear and 110x15 at the front, and it is designed for 1x (single chainring) drivetrains.

“Despite steps in gravel technology that make the Escapade more capable than ever on lanes and unsurfaced roads, Longshot geometry, suspension and tyre tech means that even our SolarisMAX hardtail is light years better offroad," says Cotic’s Richard Baybutt. "So, in that large space between the capabilities of the bikes in our range, we began to explore what bike might fit. 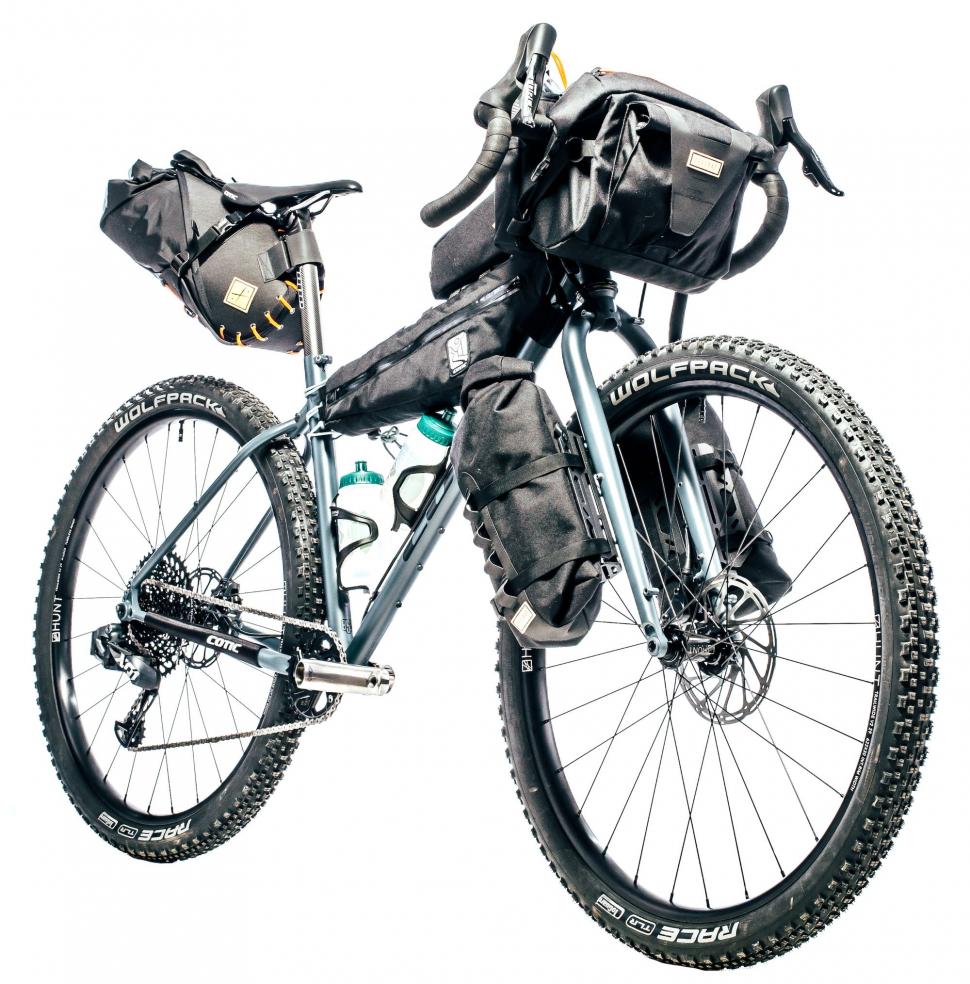 “The Cascade was born out of wanting to go a bit further, then further still. It combines the sprightly, quick and engaging ride of our Escapade gravel bike, and the MTB handling and performance of our SolarisMAX.

“We started on this project back in 2019 after watching our friend Duncan Philpott take on the Dales Divide – a 600km long-weekend intro to adventure racing. He loaded up his SolarisMax with jubilee clips on the forks to carry more bags and with skinny tyres on light wheels. The bike looked properly suited to the task at hand.

“Now if we could make a frame that purposeful but with drop bars, a shorter travel fork and more luggage options, we’d be onto something. Routes like the Dales Divide are ideal for this kind of bike – long road stints and lots of pretty spicy off-road and bridleway sections.”

After a long development process – involving riding cobbled together complete bikes from existing and old Cotic frames, along with new prototypes – the Peak District-based brand says the Cascade “has a chameleon character born of its ability to wear all sorts of build options, from stripped-down desert racer with carbon rigid forks, through overlander with our bespoke steel fork and custom fit luggage, to drop bar mountain bike with 100mm suspension forks and a dropper”. 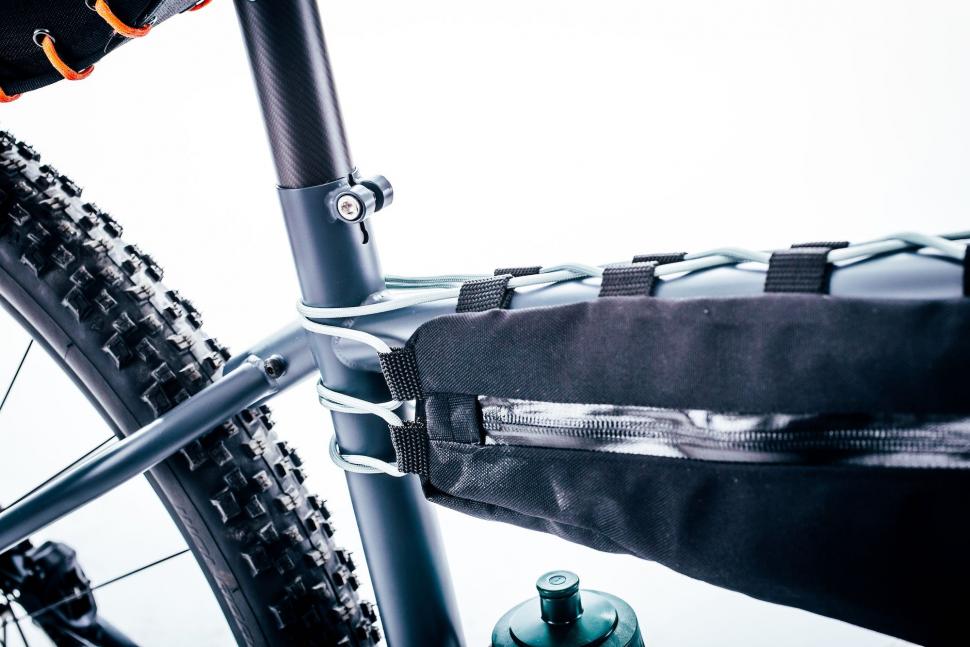 Cotic says, “It wears any of these builds with panache, and it is just as comfortable travelling for days through wide-open spaces as it is snicking down your favourite local singletrack for a quick hour blast.”

Cotic’s Cy Turner says, “The key is that this bike isn't just about massive days out. Compared to an enduro mountain bike it fairly zips along roads and hard-surfaced lanes but is so much more fun off-road than a more road-biased gravel bike.

“This means it unlocked local trails that were written off as a bit dull on my RocketMAX [Cotic’s enduro mountain bike] and has given them a new lease of fun. These bikes have been as much about riding in civvies for an hour – helmet, gloves, go – as doing some of the longest rides we've ever done.” 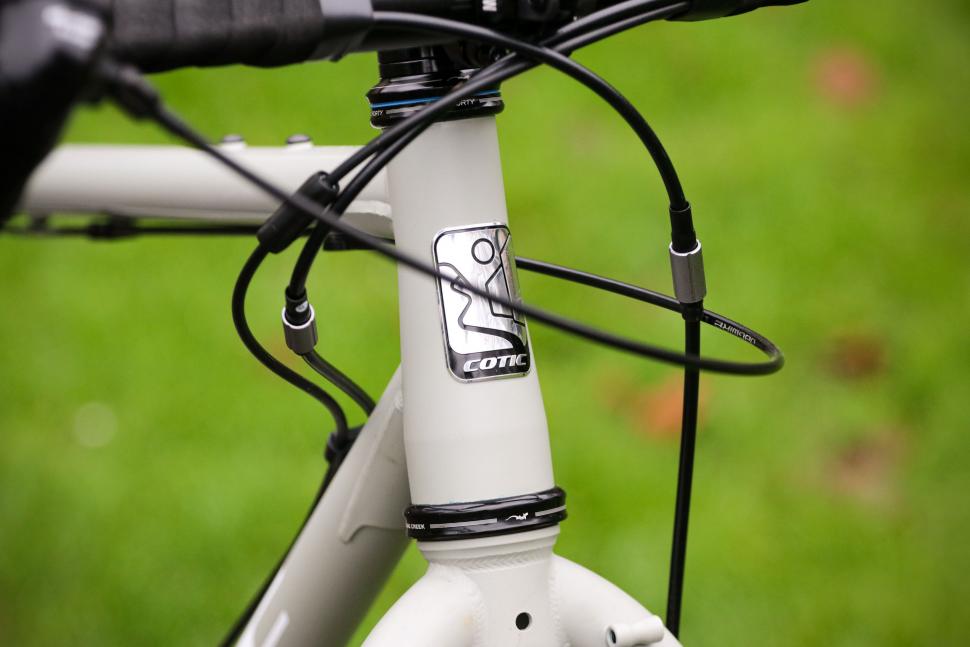 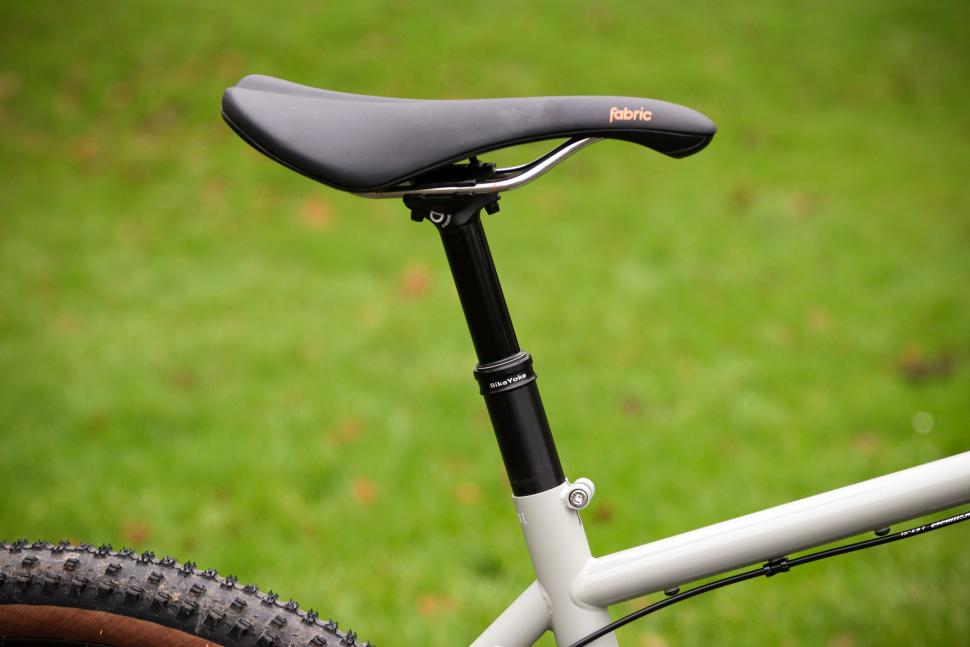 Although the front triangle is Reynolds 853, the rear end, including the wishbone chainstays, is 4130 cromo steel. 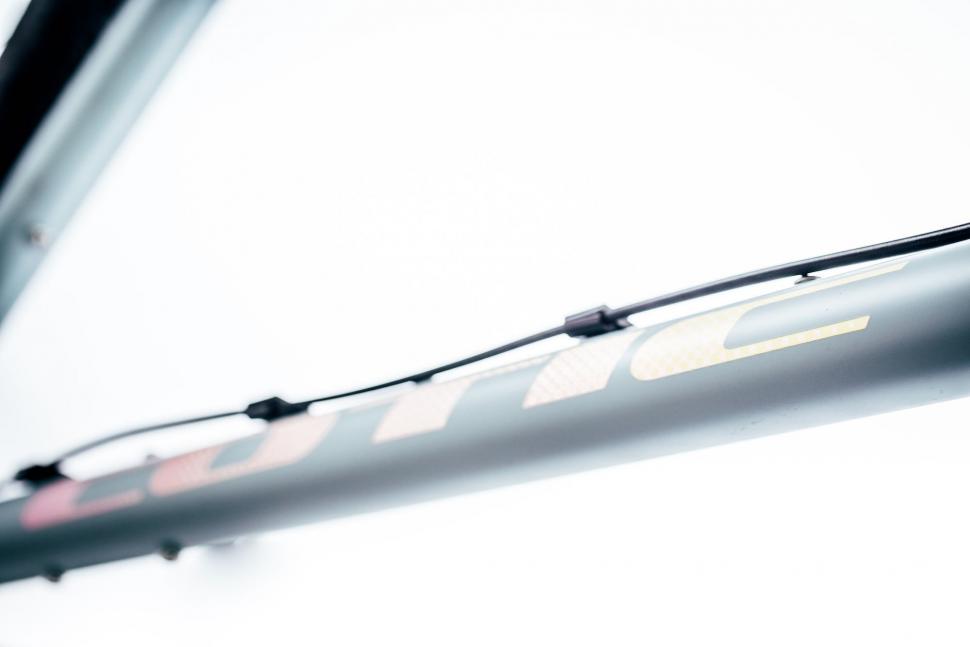 You get bosses everywhere – a grand total of 11 on the down tube, for example, for mounting bottle cages and various other bits that you might want to carry. These down tube ones double as cable/hose routing points. 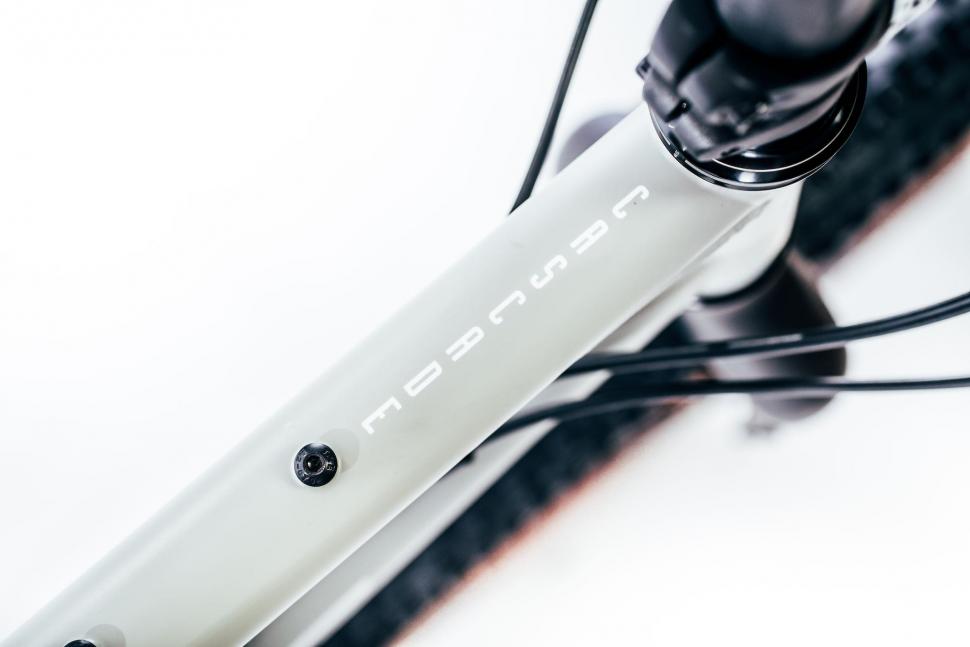 The Cascade is built to what Cotic calls its Sureshot geometry, a development of its Longshot mountain bike geometry but for drop bars. This means that frames are long, intended for use with short 50-70mm stems. 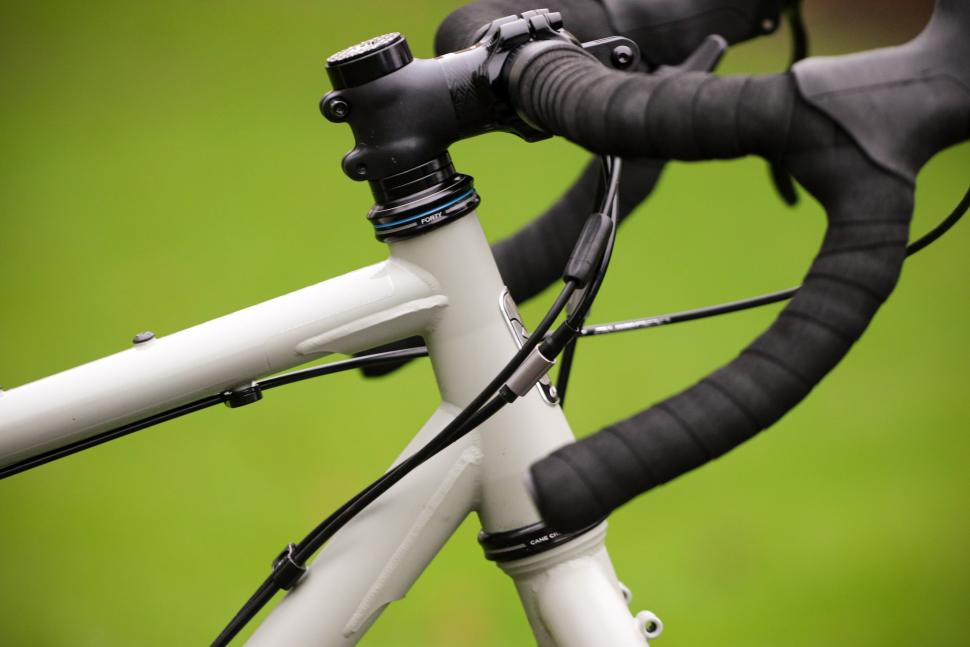 The Cascade comes in four sizes from small to XL. The seat tube angle is 74° across the board while the head tube angle is much, much slacker at 68° or 69°, depending on the frame size.

The large-sized model has a 505mm seat tube (centre of bottom bracket to top of tube; the steeply sloping top tube means the seat tube is much shorter than it otherwise would be) and a 613mm effective top tube. 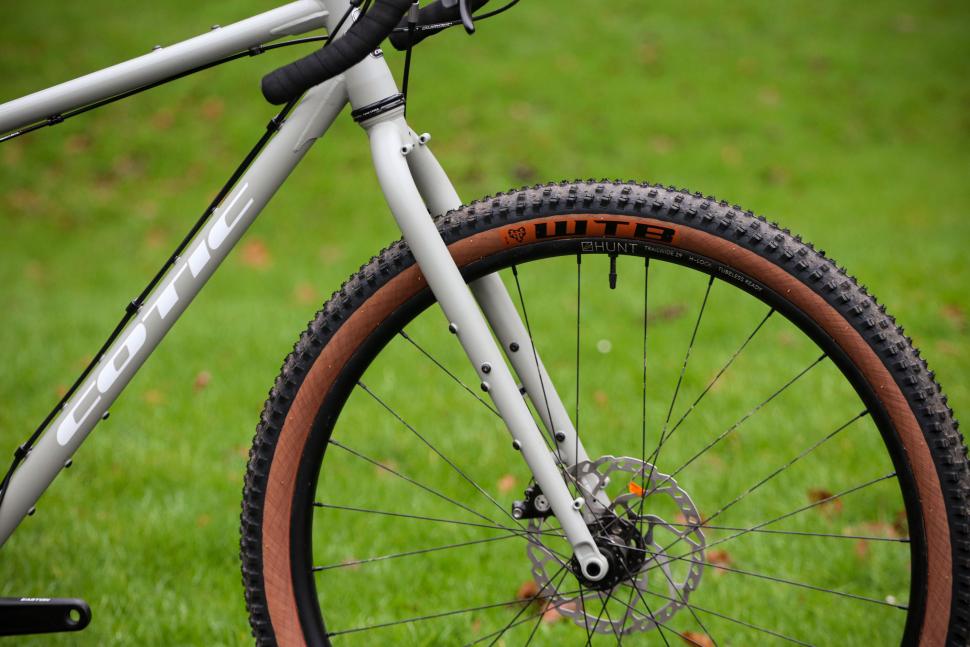 In contrast, the head tube is a dinky 126mm but bear in mind that the Cotic Alpaca rigid fork is 483mm (with a 44mm offset), and that brings the front end up considerably. Cotic chose to develop the frame around such a long fork because it gives the option of fitting a 100mm suspension fork without altering the geometry too much.

The stack is a tall 633mm while the reach is 432mm, giving a stack/reach of 1.47. Cotic advises a 60-70mm stem on this frame size so the distance to the handlebar isn’t as far as you might imagine.

The Cotic hasn’t chased a light weight with the Cascade, the frame coming in at a claimed 2.63kg (5.8lbs) for the size large, rear axle included. The Cotic Alpaca steel fork has a claimed weight of 1.38kg (3.04lb) with an uncut steerer (without axle). 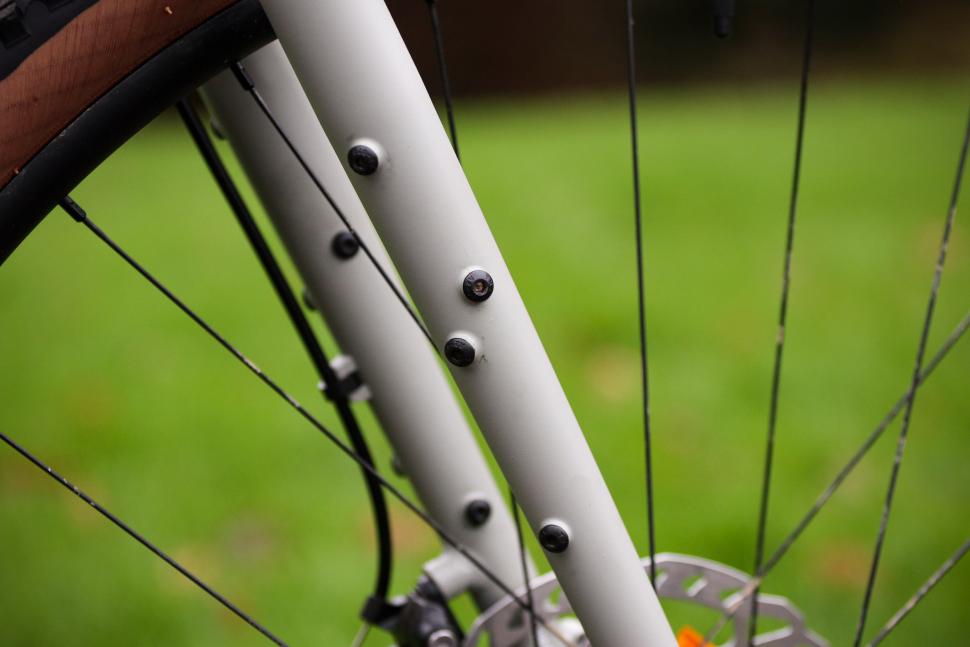 Prices start at £849 for the Cascade frame with Alpaca fork. These are in stock now.

Complete bikes start at £2,099. This gets you Cotic’s Bronze build with Microshift shifting, mechanical (cable operated) disc brakes and a standard (non-dropper) seatpost. Cotic says it will receive a delivery of Microshift drivetrains in a week or so, and Bronze build bikes will be delivered within the month. 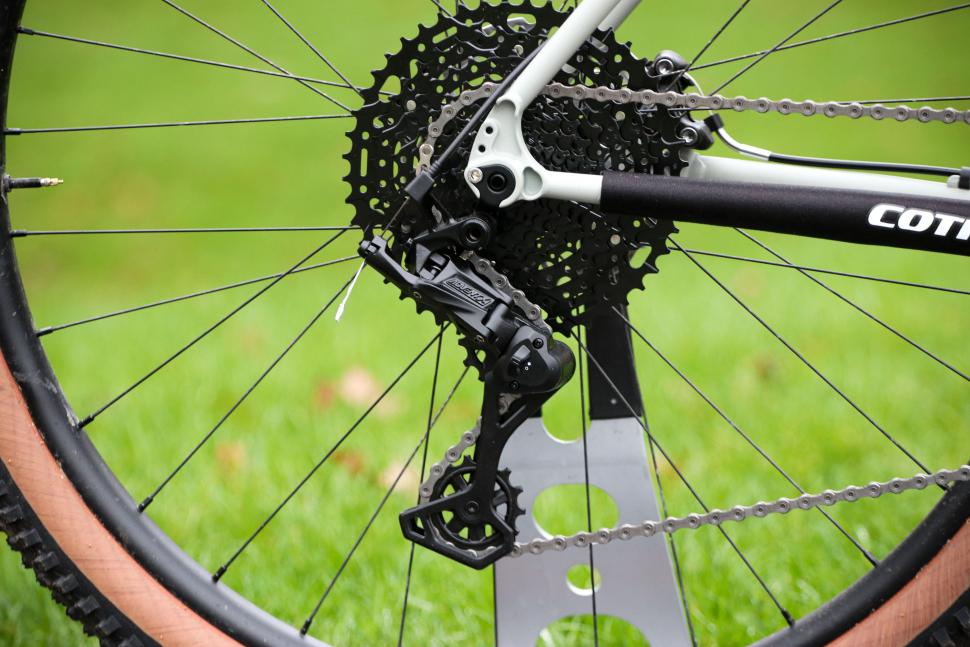 A Gold build, with Shimano GRX/Easton components, is £2,699 and it's available right now. Cotic says that customers ordering this week could have a bike by the end of next week, which is very unusual in the current climate.

Silver builds, featuring SRAM Apex 1 components, will be available later in the year.

Check out our gravel and adventure bike reviews

All bikes are currently specced with Hunt XC Wide wheels and a choice of WTB Ranger or Wolfpack Race tyres. Cotic 46cm flared drop Valley bars are fitted as standard with the 52cm (hood to hood width) PNW Coast as an option.

Cotic says it will also be doing rolling chassis kits for people looking to move parts over from their older bikes. Frameset and rolling chassis orders will be shipped as fast as they can be processed.