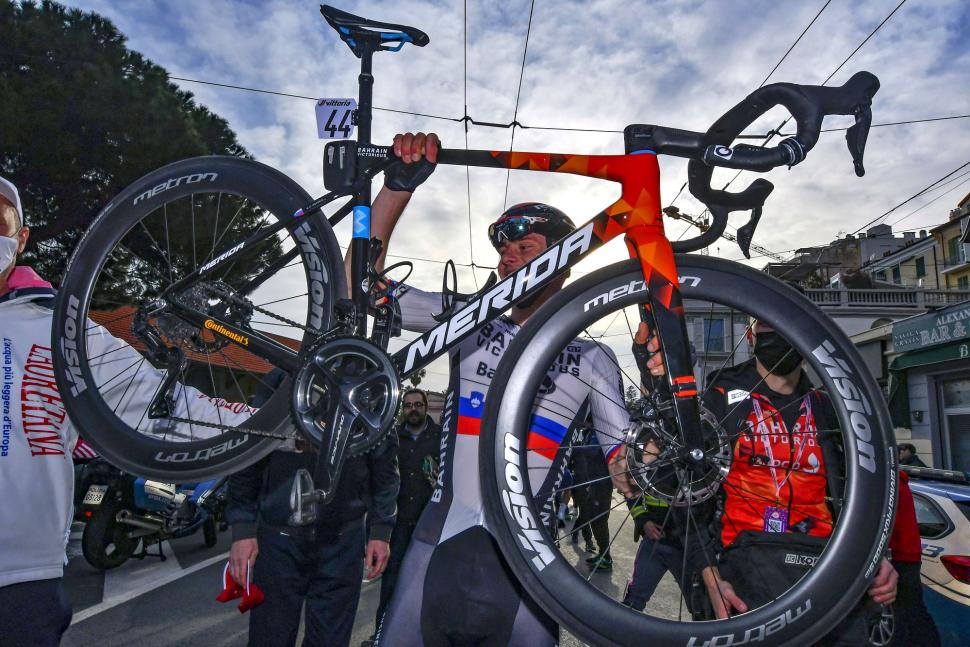 Mohorič also told the road.cc Podcast that he would have crashed on his death-defying descent of the Poggio if it wasn't for the modifications made to his Merida Scultura, that was prepped weeks in advance
by Jack Sexty

Matej Mohorič has revealed more details about the specially optimised bike he used at Milan–San Remo, saying that the Merida Scultura was equipped with oversized disc rotors and new "secret" bearings that increased wheel efficiency. The Slovenian also claimed that the wobbles he experienced during his now-famous descent of the Poggio to break away from the peloton would have resulted in him crashing if he wasn't using the special equipment.

Speaking on episode 21 of the road.cc Podcast, Mohorič said the victory was the result of months of planning from his team, and the initial idea to use a customised bike complete with a Fox Transfer SL dropper post for Milan–San Remo was put forward by Bahrain Victorious head mechanic Filip Tisma.

Mohorič said: "We tested different ones, different lengths. We started to test with a 120mm dropper post… the gap was too much.

"We went for a smaller one, a 60mm dropper post and that was just perfect.

"It helped me to lower the centre of gravity to handle the bike, but still to remain seated on the saddle. I was looking forward to the race and experiencing the features in the race.

"In training it seems to me that it made a huge impact, and then in the race it really confirmed it."

While the use of the dropper post was garnering all the attention, there were other subtle changes made to Mohorič's Merida Scultura, a bike chosen over the more aero Merida Reacto for its round seatpost; and, it turns out, its ability to be adapted to take larger disc rotors, with Mohorič speccing a 180mm rotor on the front and 160mm at the rear to improve braking power.

Even more fascinating was the mention of "special" bearings added to his Vision Metron wheels, which Mohorič' said "apparently have zero [losses] of drag from the bearings."

He added: "It’s a secret I think… it’s a thing they’re developing and I think they’re planning to put it on the market.

"It’s a special ceramic bearing that I think has a different mechanism of the bearings being installed into the hub. It’s similar to the trains they use in Japan that float in the air."

What Mohorič is describing sounds to us like it could be a magnetic drive hub, being as his mention of the Japanese floating train appears to be referring to the magnetic levitation that propels a Maglev train (actually first developed in Britain).

The idea of magnets inside a bicycle hub isn't a new one, with DT Swiss holding a patent and Oregon component specialists Project 321 already offering hubs with a magnetically-actuated ratchet mechanism that promises less drag and friction while freewheeling; but if what Mohorič is describing is something similar, it will be the first time we've seen it on a pro road bike. 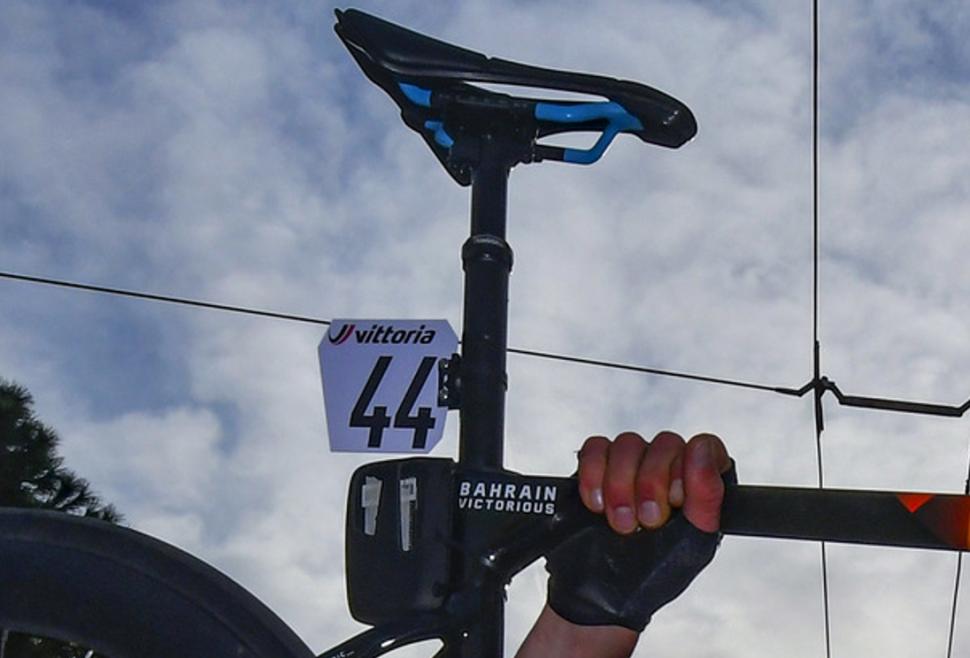 Even with his bike's upgrades to help going downhill, the aggressiveness of Mohorič's descent meant he still nearly crashed twice, curing a wobble and also having to bunny hop out of a gutter. He thinks without the dropper post, one of the incidents would have definitely resulted in a crash:

"Even when I jumped out of the ditch, the lower saddle enables you to do it easier," said Mohorič.

"The saddle is not in your way, it's almost like on a mountain bike. It's easier to bunny hop when you have your saddle lower."

On the future of dropper posts, Mohorič admits he was not convinced until he tried it, and is now hopeful the idea might catch on. He also says that dropper post adoption will depend on whether the bike industry decides to push the technology on road bikes:

"I think it depends on what the bike manufacturers are going to do," said Mohorič.

"It's hard to fit an aftermarket seatpost on a top-tier road bike at the moment. I think our Merida Scultura is one of the few bikes that can take it because it has a round seatpost.

"Especially on the safety... I felt completely comfortable and in control [with a dropper post] whereas the other years I remember maybe going a little bit slower and I felt like I was on the limit.

"With a dropper post it gives you significantly more control of the bike. You just feel more relaxed and you can actually brake harder because you can get the weight down more effectively."