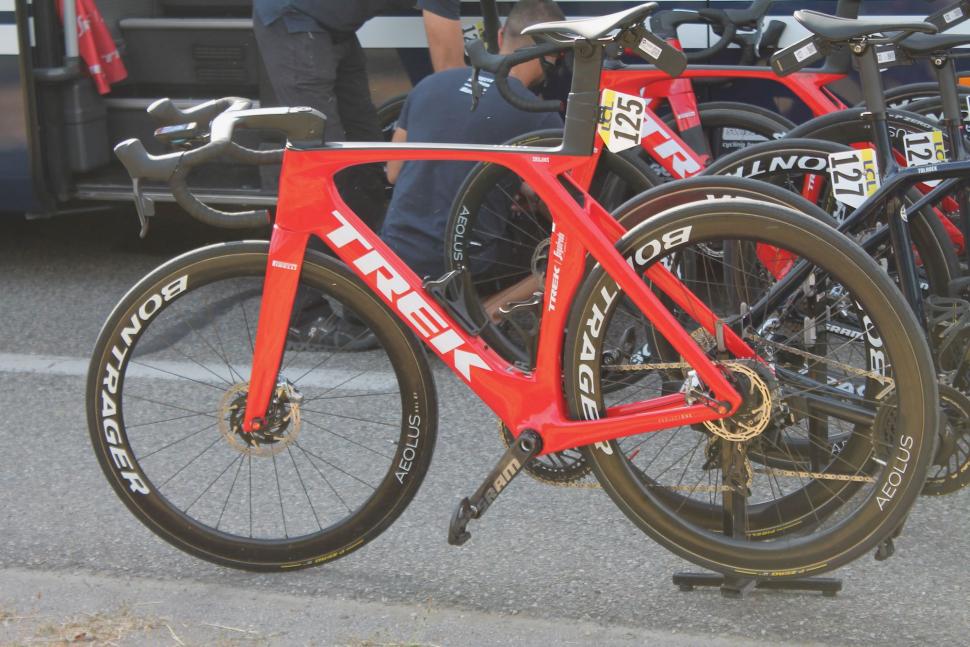 What's going on with that seat tube? And what the hell is IsoFlow? Watch the video and read all about the 2023 Trek Madone, being raced for the first time at the Criterium du Dauphine
by Mat Brett

A new Trek Madone road bike has broken cover for the first time, being ridden by members of the Trek-Segafredo pro team in the Criterium du Dauphine that began in La Voulte-Sur-Rhone this morning.

The Madone is Trek’s aero road bike, sitting alongside the lightweight – and these days also aero – Emonda. 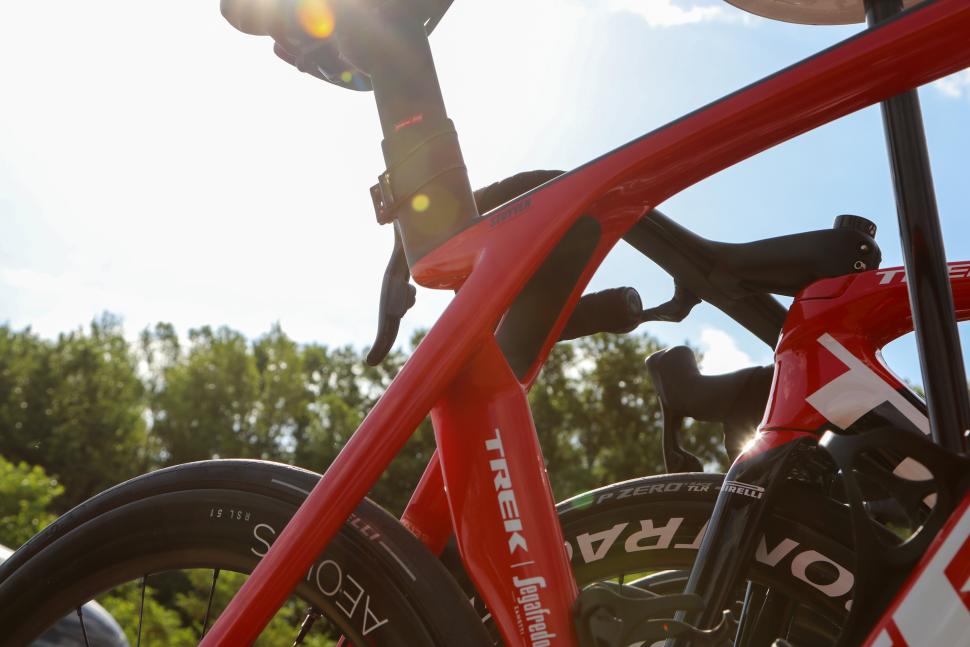 Trek is saying nothing about the new design other than the usual: “Trek is constantly working on product development with our sponsored athletes and when we have anything to communicate we’ll let you know…” Or something. That means we’re relying totally on what we see here. 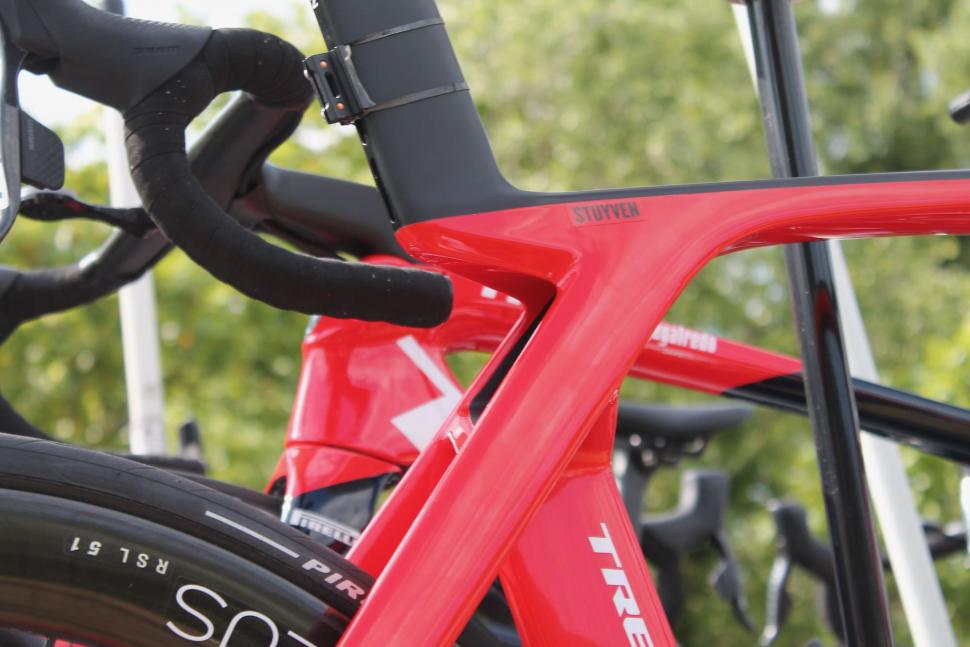 The key feature is the interrupted aero seat tube. It splits in two at its top to join each of the seat stays. Then it stops abruptly before resuming as more of a seat mast to house the aero seatpost. 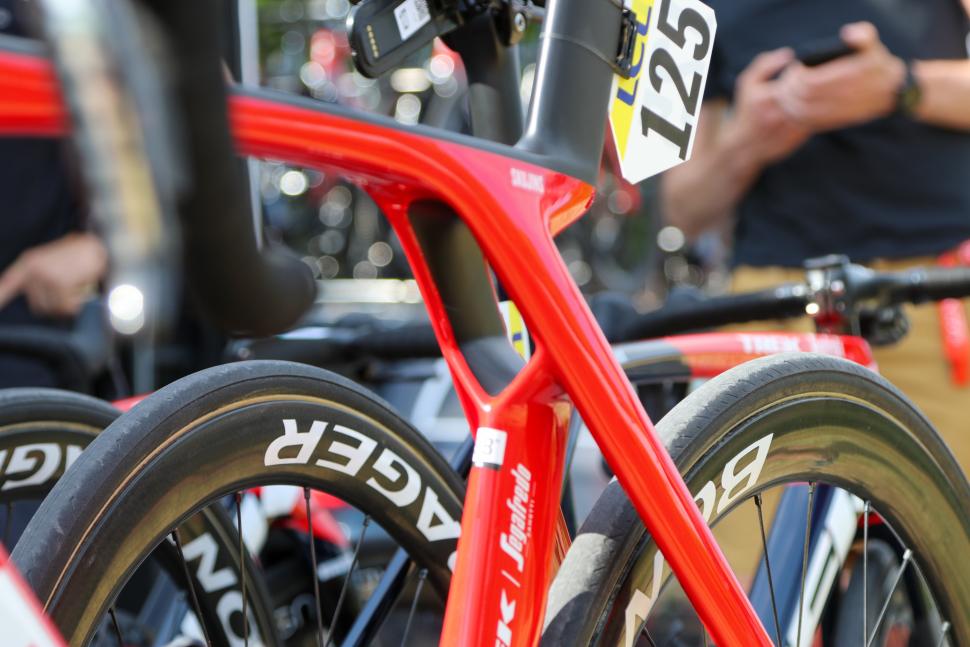 What’s the idea? We’re guessing that Trek will be talking about the design adding compliance to the ride because that has been among the Madone’s key features for many years; there’s no sign of the IsoSpeed system – which has been incorporated to smooth the ride in the past. IsoSpeed is designed to allow the seat tube to move independently of the rest of the frame, meaning a degree of movement at the saddle, so we surmise that the new design is intended to do the same job but in a simpler and lighter way. 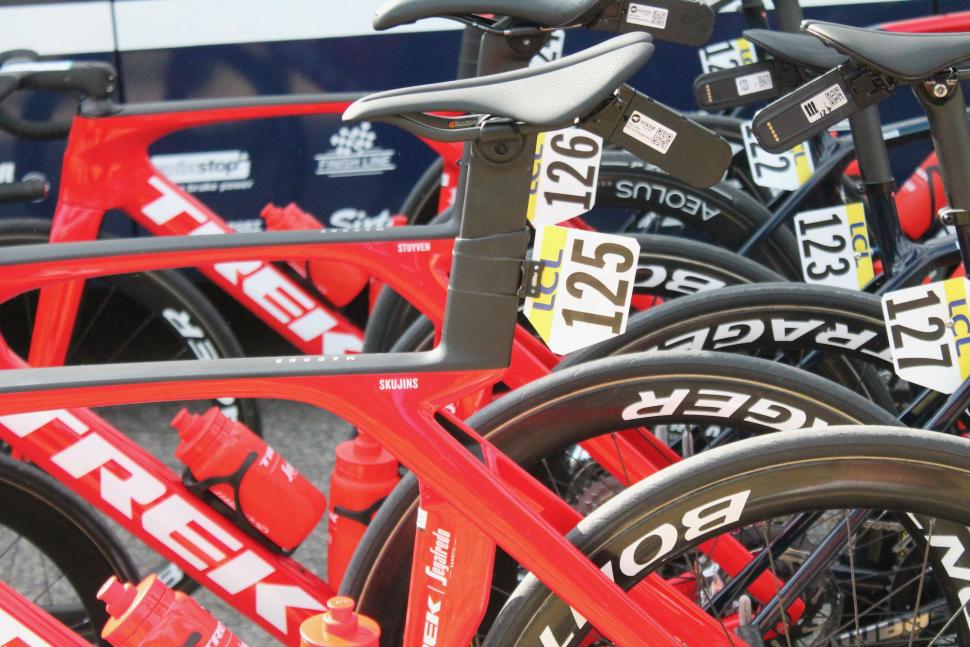 The IsoSpeed system used on the last Madone was damped by an elastomer and was adjustable for rider weight and ride preference. There’s no sign of any adjustability here.

The gap formed by the interrupted seat tube and the seatstays is called IsoFlow. That name suggests that Trek could be claiming some sort of aero benefit here. 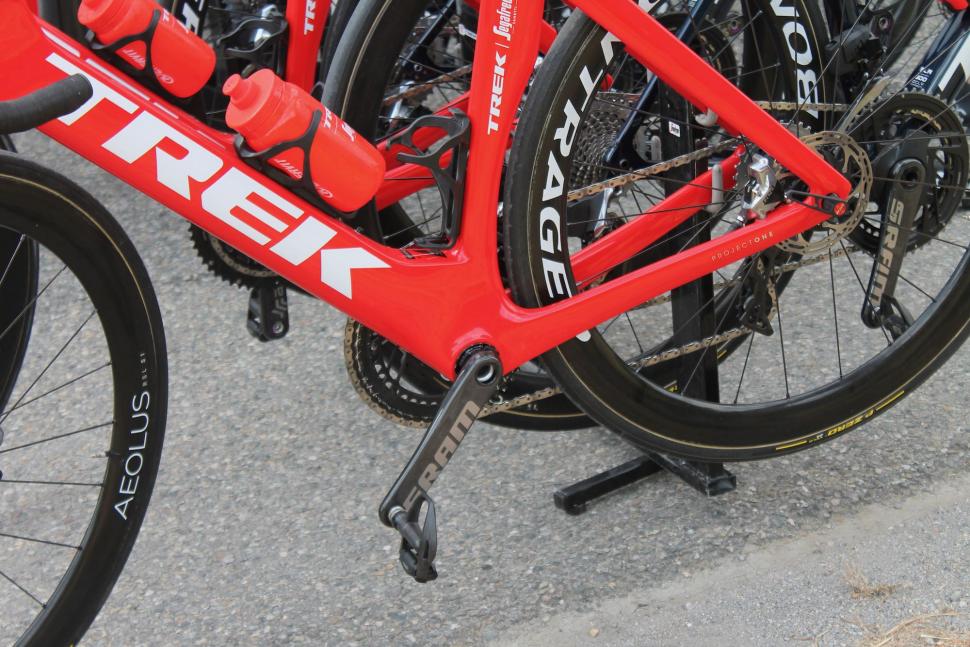 Putting the seat tube to one side, the new Madone incorporates a HUGE slab of frame around the bottom bracket, presumably to provide stiffness down there, and a similarly whopping head tube. 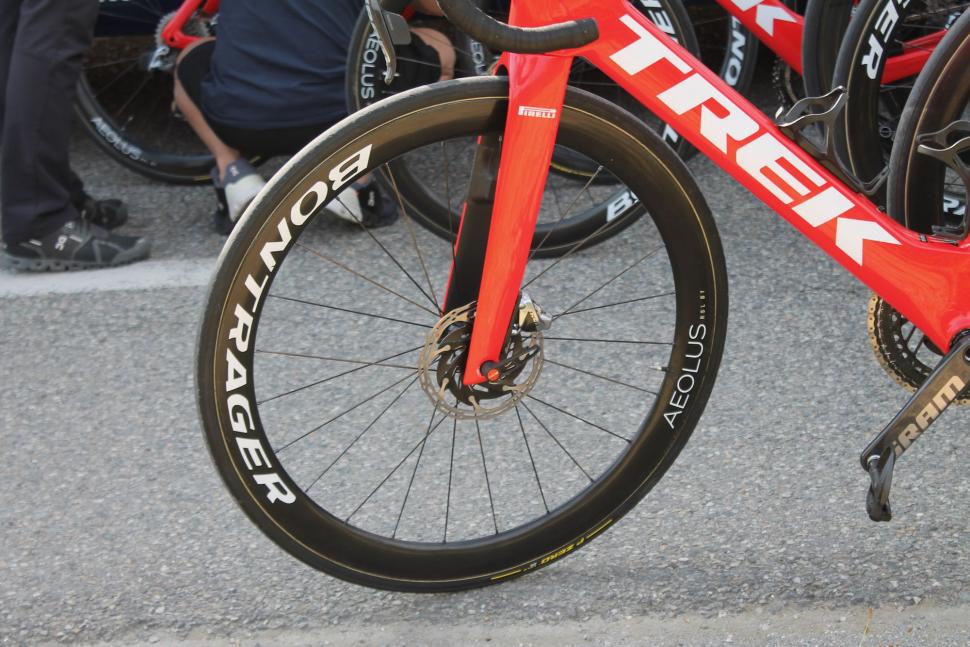 As you’d expect of an aero road bike, the fork blades are deep while all of the frame tubes appear to be shaped to reduce drag with Kammtail profiles. 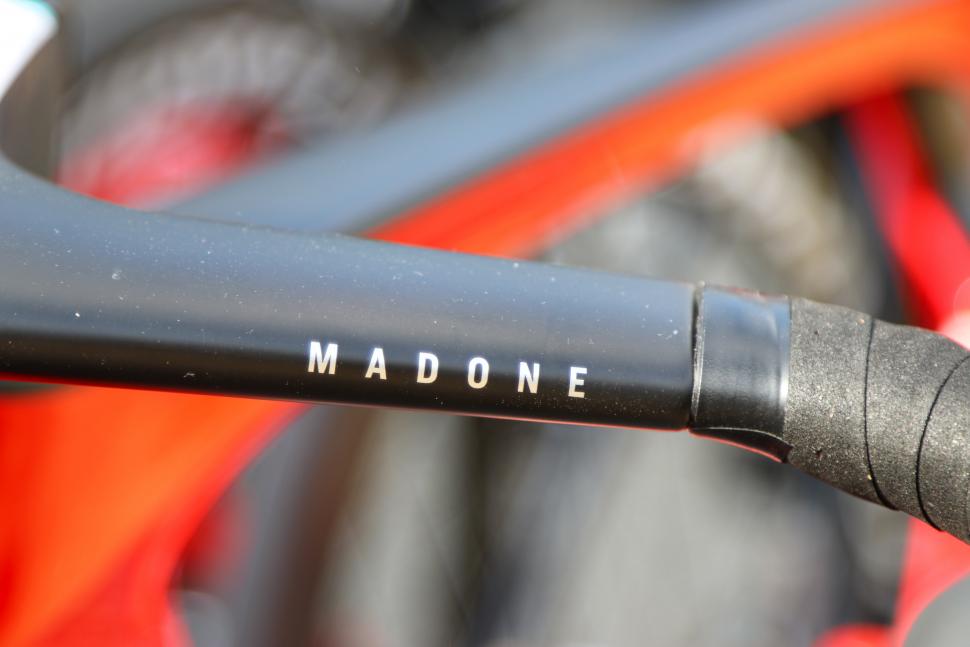 The bike features a combined handlebar and stem with aero top sections and no brake hoses on show. There’s a very nice bit of detail at the front which could also suggest that this handlebar is specific to the Madone. 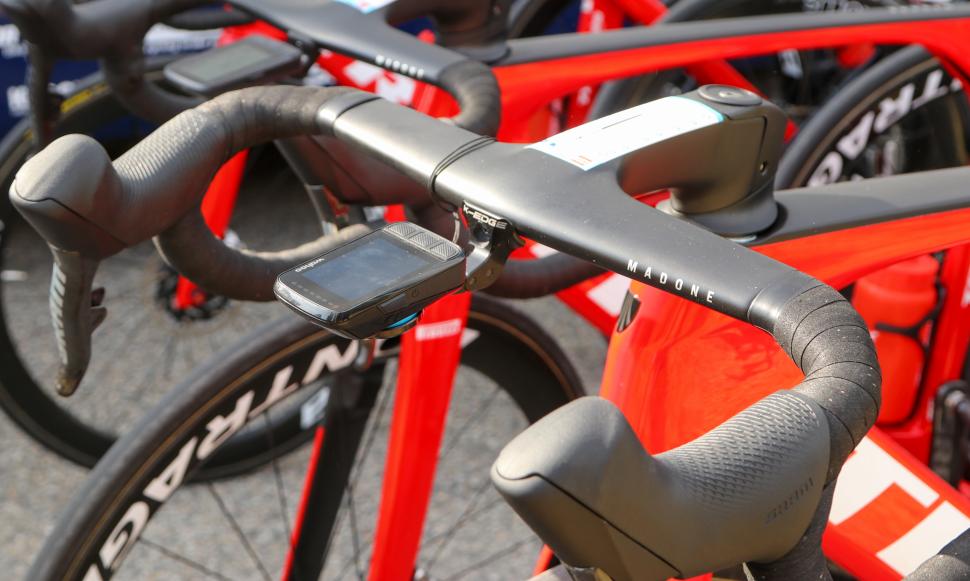 The stem section is unusual with an added part that sits behind the attachment point with the fork steerer. We’re guessing that this is designed to offer an aero benefit when used alongside the specific headset cover. 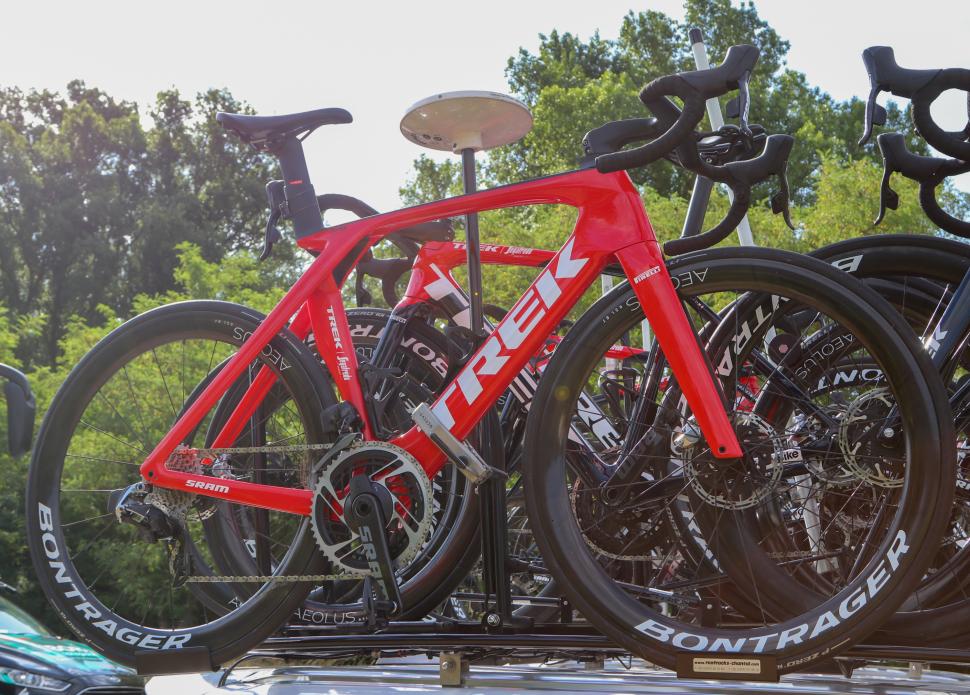 We’d be pretty certain that the new Madone is lighter than the previous one because, well, that’s usually the case. Over the past couple of years, it has become increasingly important that top-end road bikes are both lightweight and aero – being one or the other is no longer acceptable – and it looks like this is an effort by Trek to go down that road.

What do you think? This is a design that’s sure to be divisive, so let us know what you think of the new Madone in the comments section below.