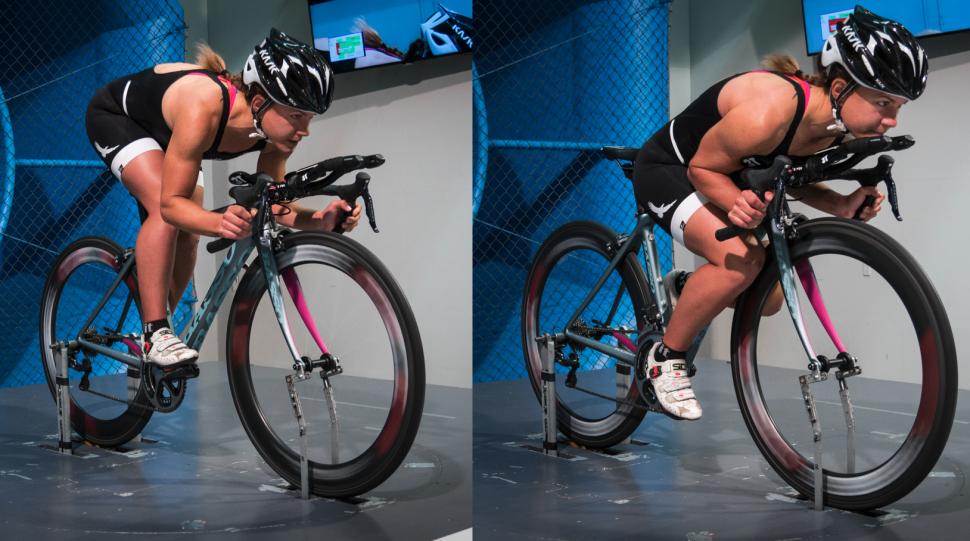 Downhill Positions - via Swiss side

Swiss Side says its aero engineers "are not amused" by the UCI's latest rule changes, claiming wind tunnel results show riders can save considerable time by top tube descending and riding in the TT position
by Jack Sexty

Following on from the UCI's controversial ban of descending while sat on the top tube and riding in the time trial position recently, experts at Swiss Side have released data from the wind tunnel to show that both rule changes could significantly decrease speed and increase drag. Swiss Side goes so far as to claim the changes will make professional road racing "less exciting and thereby less entertaining".

> Live Blog: use of forearms as support banned by UCI

The amendments that will come into effect on 1st April (we're pretty sure it's not a joke) now say: "Sitting on the bicycle’s top tube is prohibited. Furthermore, using the forearms as a point of support on the handlebar is prohibited except in time trials"; and it's divided the public and pro peloton alike, with some saying it's a wise move to make racing safer, and others denouncing the UCI for showing too much constraint.

Swiss Side says it is not making judgements on whether this is a good or bad decision, but claims that its data is "clear, quantifiable and undeniable" in showing that the 'super tuck' and TT positions are faster when used appropriately.

The chart above shows the results from Swiss Side's testing of arm positions, giving a CdA measurement (the aim is to get it as low as possible) and how many watts are needed to hold speeds of 40, 50 and 60km/h. Swiss Side then calculated how much time a rider could save in a breakaway over a 10km effort riding in the TT position, assuming the leader of the chasing group is not.

"The difference in the achievable time or distance which resultant from a rider (or
riders) no longer being allowed to use the TT position, compared to the drops, over a
10km effort with a typical overpower, would be around 13 seconds, or 180m", says Swiss Side. "This means that the gap they could build out would be reduced by these amounts, purely due to the increase in aerodynamic drag."

> Why riders like you need to get more aero

When our own Dave Atkinson visited the wind tunnel at the Boardman Performance Centre back in 2019, we found the same was true for non-pros. Boardman's experts found that Dave was almost 100 watts more efficient at 45km/h in the TT position compared to riding on the hoods.

Cast your minds back to Chris Froome's epic descent on stage 8 of the 2016 Tour de France that bagged him the stage and the leader's jersey, and we can see that the super tuck was deployed successfully for Froome to build a lead over his rivals. In the end he finished 13 seconds up on the chasing pack... so if Swiss Side's results are to be taken at face value, is it possible that Froome might not have been able to break away at all if the super tuck was banned five years ago?

Swiss Side concludes: "Tactically, it [the rule changes] simply reduces the tools the riders and teams have in their bag to plan and execute attacks.

"Certainly there is an element of risk involved in riding either position, because the level of control on the bicycle is reduced. It could be argued that professional cycle racing is not just about the physical abilities of the riders but their technical skill and abilities to ride their bike. This certainly is the case in mountain bike and cyclocross racing, why should it be any different in road racing?

"Furthermore the excitement in road racing also inarguably comes from the tactics
and the breakaways. Take this away and the racing will be less exciting and thereby
less entertaining."