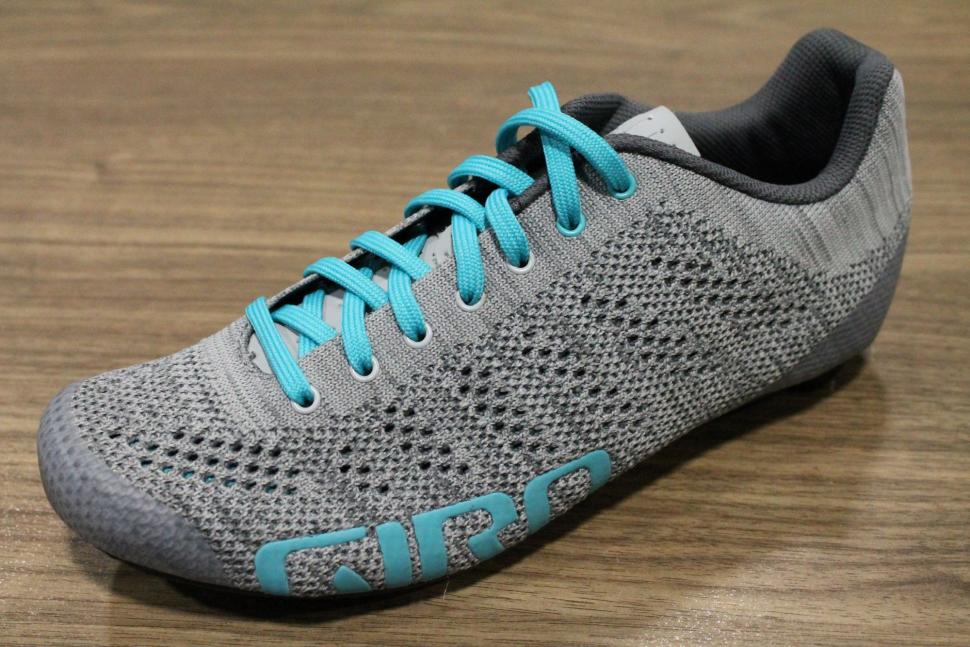 Giro is releasing a new lineup of Xnetic Knit cycling shoes along with an aero road helmet called the Vanquish.

Let’s start with the shoes…

You’ll have seen plenty of knitted running-style shoes from the likes of Nike and Adidas over the past few years and Giro is now bringing in similar-ish styles over to the world of cycling. Why? It’s largely a style/fashion thing, although Giro sees it as an opportunity to be creative and says that there’s far less waste than with a normal pair of microfibre uppers because the knit can be made to the precise shape required, not cut out of a large piece of fabric. Giro also says that the Xnetic Knit shoes are offer ‘sock-like comfort’ thanks to being supple and breathable, although we’ve yet to try them (we’ve seen and got all touchy-feely with them) so can’t comment on that. 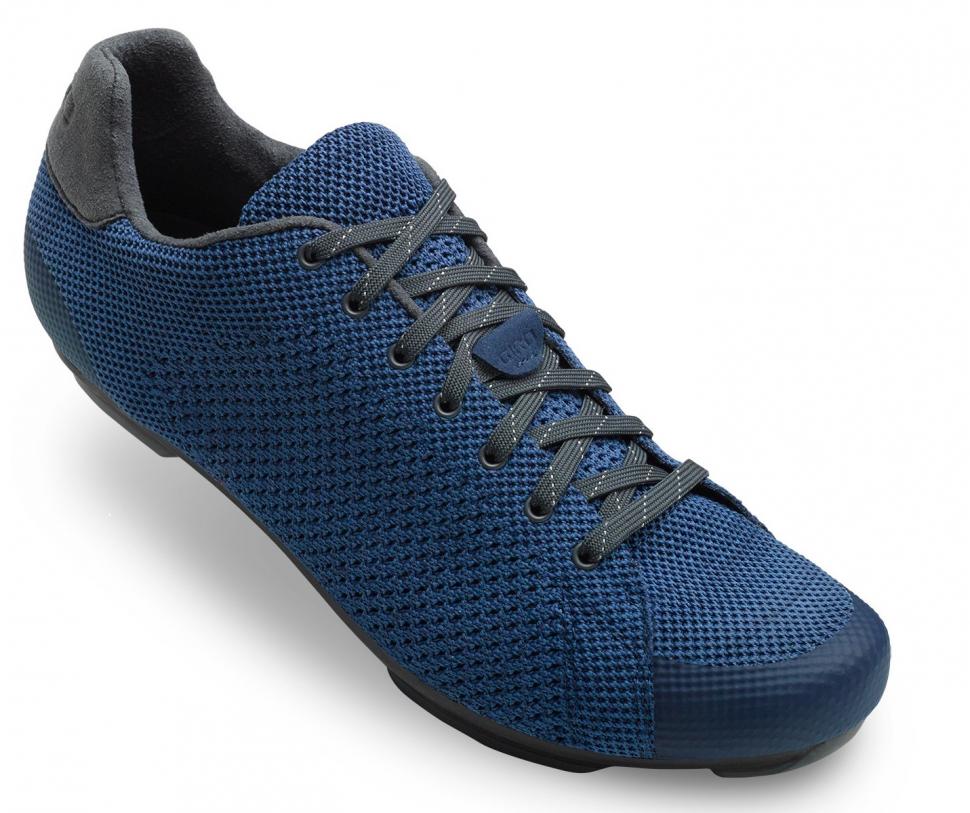 The new footwear styles aren’t coming in at the top of Giro’s range, they’re mid-range products and they cover both the road and mountain bike sectors of the market. Giro doesn’t feel that it needs a new top-end shoe at the moment. 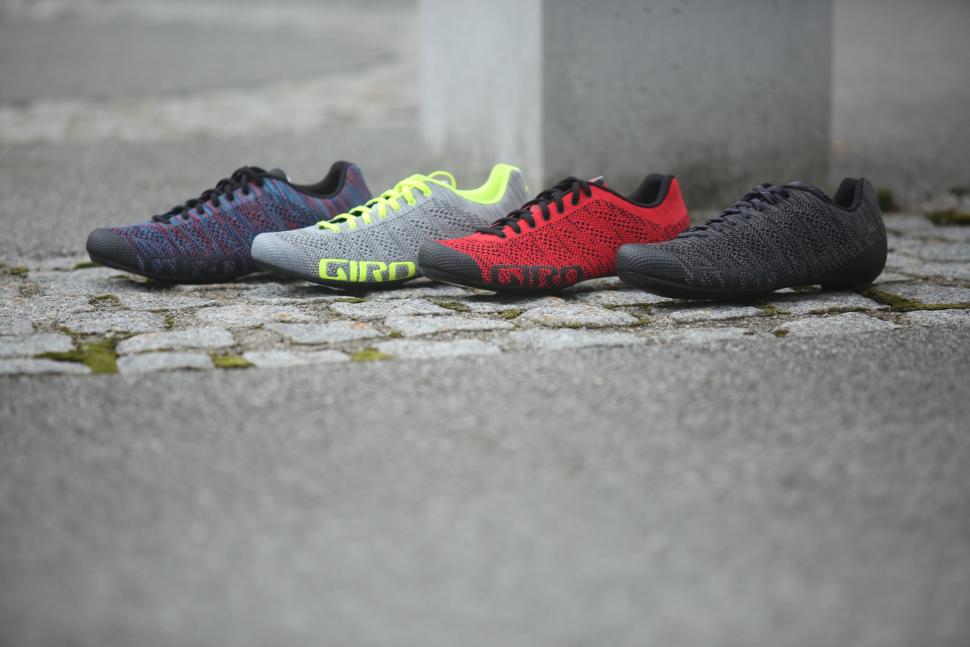 The Xnetic Knit uppers are made from a combination of polyester and nylon. The nylon fibres are melted to fuse with the polyester. Giro says that it worked on several different blends before deciding on the final version. 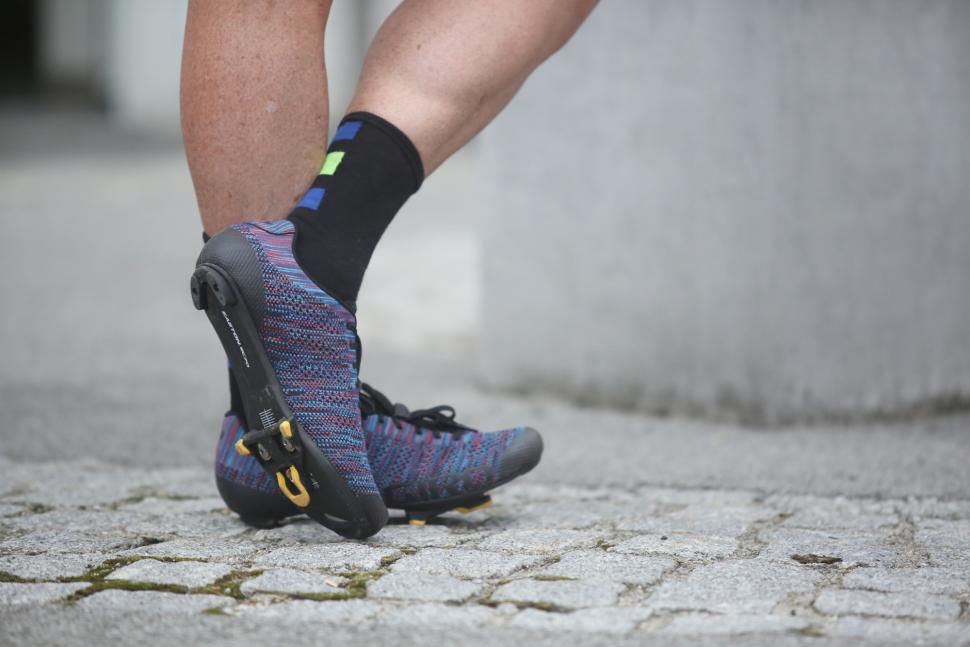 An upper made only from the polyester/nylon blend wouldn’t provide the structure needed for a cycling shoe so Giro uses a TPU (thermoplastic polyurethane) skeleton. These ribs are internal on the road shoes and external on the mountain bike shoes. The uppers are given a DWR (durable water repellent) finish to provide some protection from spray, mud and whatever else comes your way while you’re out on the road, but something knitted in this way is clearly never going to be in any way waterproof. Giro says that if the shoes do get wet the uppers dry out  quickly (assuming it’s not still tipping down, obviously). The company also says that the shoes clean up well after a dirty ride – although it’s not going to be as easy as wiping a damp cloth over microfibre uppers. The mountain bike shoes are made in darker colours than the road shoes for that reason. All of the shoes, men’s and women’s, are made on Giro’s existing lasts. There are three different models based on existing shoes in the lineup. 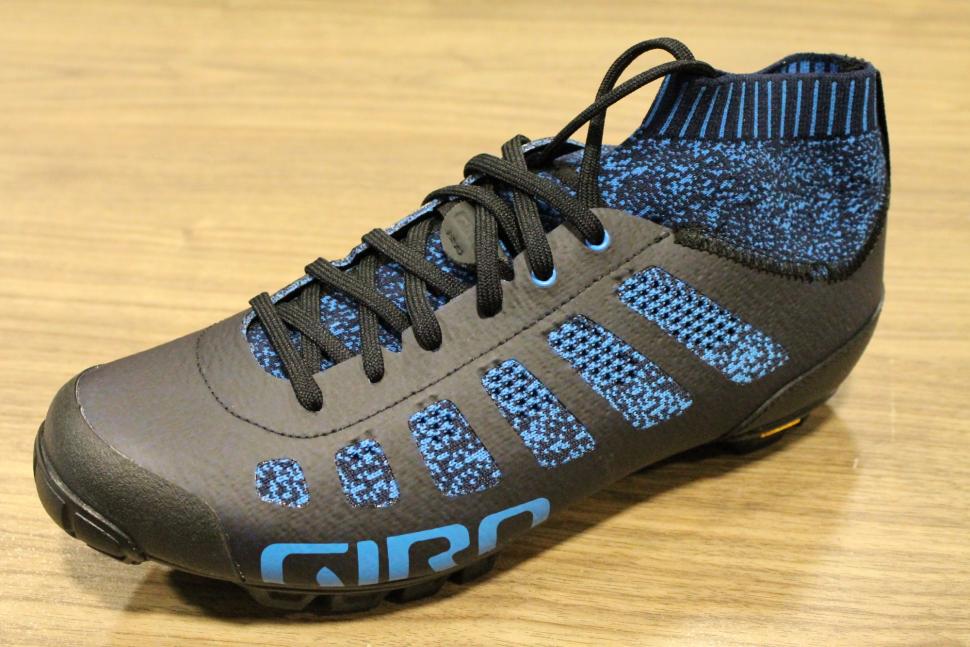 This is a mountain bike shoe with a rubber toe guard and a bonded TPU heel to increase durability and resistance to abrasion. This comes with a stretchy ankle cuff, an Easton EC70 carbon fibre sole and a moulded Vibram rubber outsole for off the bike grip. Giro claims 380g per shoe in size 42.5 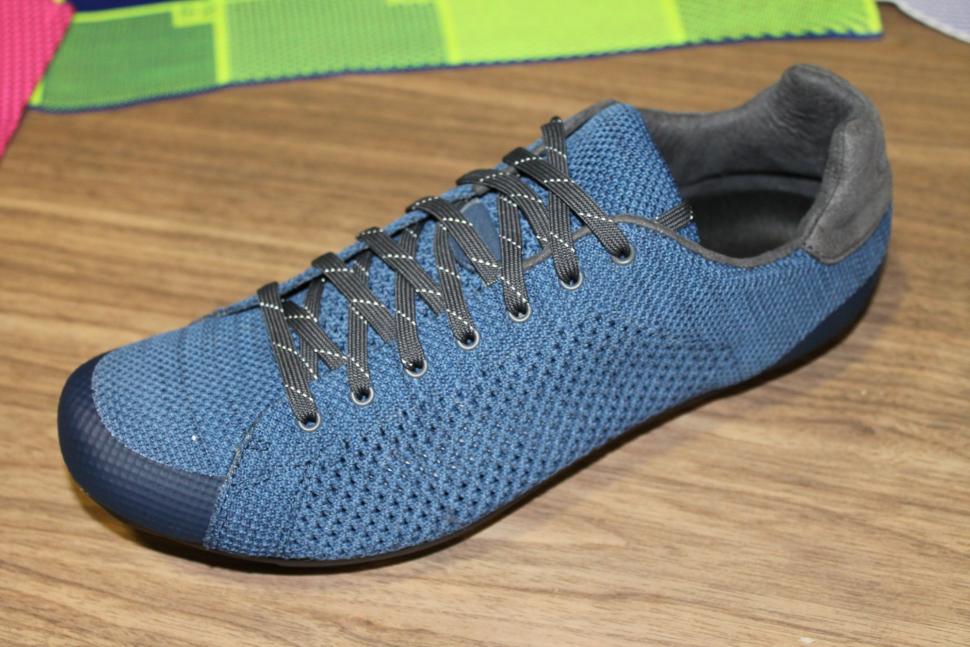 Giro says that it could eventually offer Xnetic Knit versions of other shoes in its range but there are no concrete plans yet. Presumably, it’ll make decisions based on the reaction to these. The other news from Giro is a brand spanking new aero road helmet called the Vanquish MIPS. This is a high-end option and I had the chance to use this on a three hour ride over the weekend. 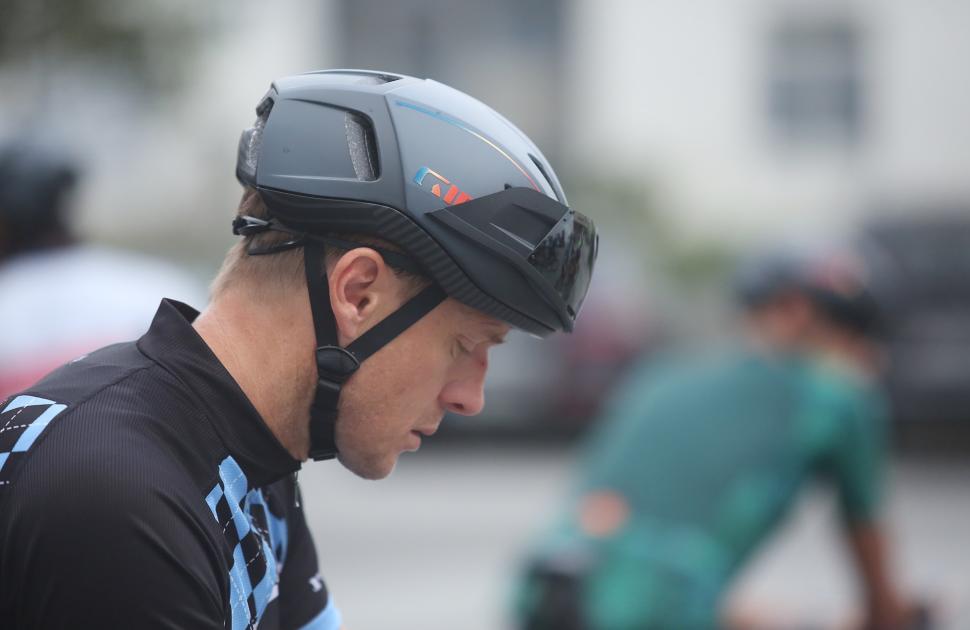 Rather than being an iteration of Giro’s existing Air Attack aero helmet, the Vanquish MIPS is all new. Giro says that, if anything, it owes more to its Arrowhead time trial helmet although it was developed by the company’s Advanced Concepts Group which is charged with coming up with entirely new approaches. As you’d imagine, the Vanquish MIPS design has been shaped, figuratively and literally, by CFD (computational fluid dynamics) analysis based on wind-averaged drag.

“We leaned heavily on the extensive development and testing capabilities of The Dome [Giro’s unrivalled helmet R&D facility in Scotts Valley, California], the resulting helmet packs several unique features new to cycling helmets, most notably the patent-pending TransformAir design which tricks the air flowing over, and through, the helmet to dramatically reduce aerodynamic drag.” 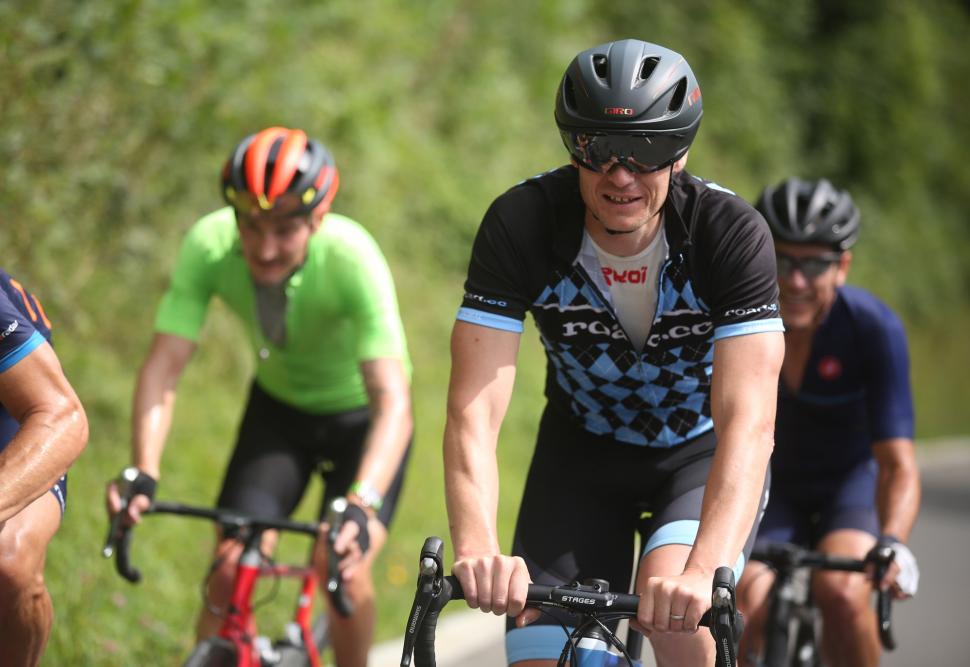 TransformAir? This is an aerodynamic “cliff” that features on the shell. Rather than being a smooth, continuous shape from front to rear, about halfway back (just behind the logos) the shell steps down from one level to another. The idea is that this makes the air act as if the Vanquish MIPS was a full teardrop-style time trial helmet, but in a profile that’s more versatile. 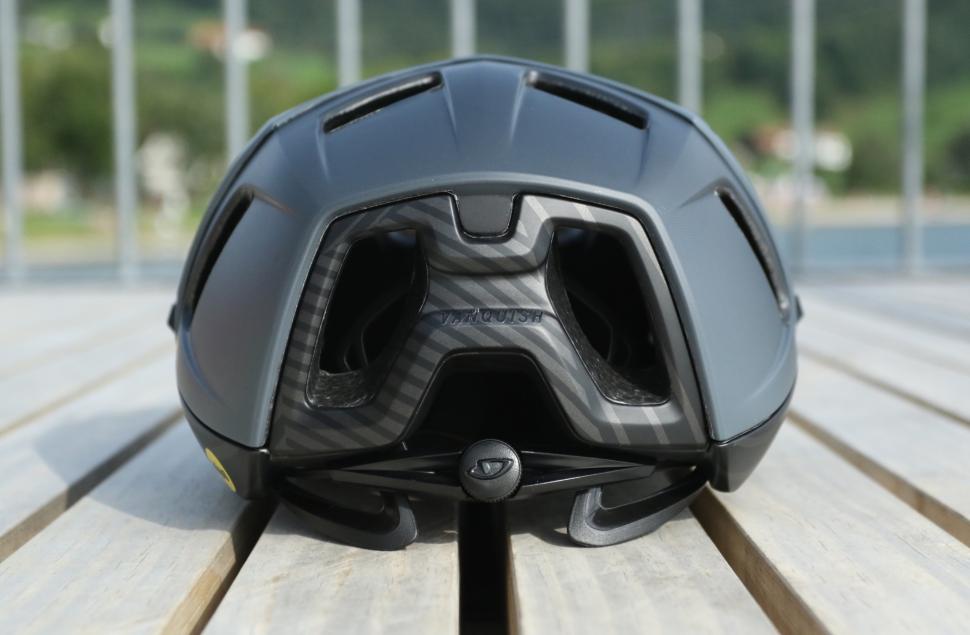 There aren’t loads of vents – four up front leading via internal channels to four more towards rear and a couple of large exhaust ports right at the back.

The Vanquish MIPS comes with a magnetic eye shield, called Vivid, that it has developed with Zeiss. As well as protecting your eyes, this is designed to streamline the airflow. The lens is intended to increase contrast and definition while keeping colours true. 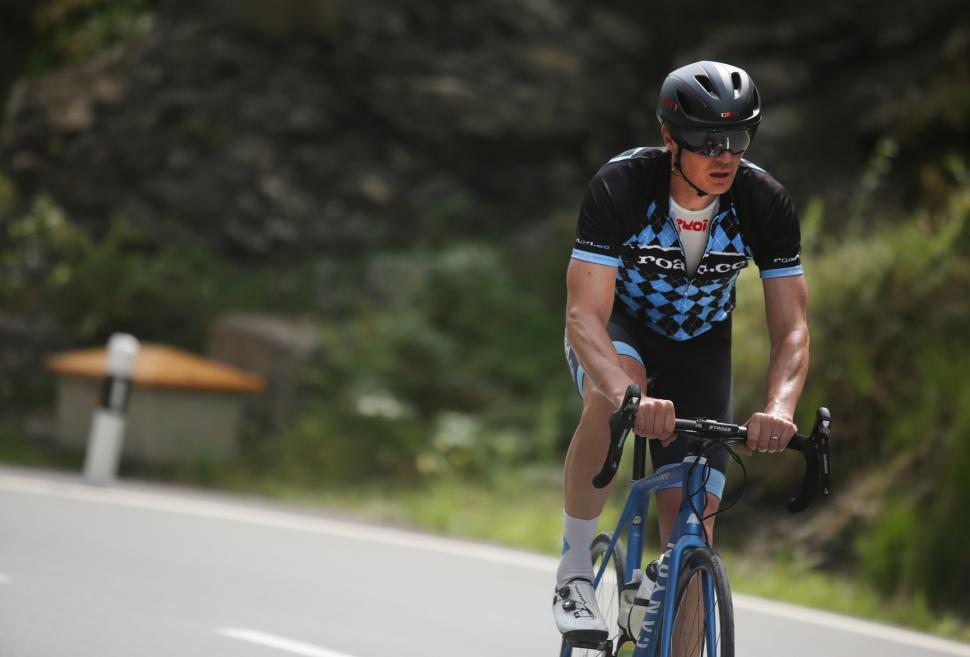 When you don’t want the shield in place – when you’re on a climb, say – you can take it off, flip it, and stick it on the shell of your helmet, separate magnets holding it in place. This works really well. I must have done this half a dozen times on our ride today without any worries. It’s not really the sort of thing you can get wrong and it’s perfectly secure. 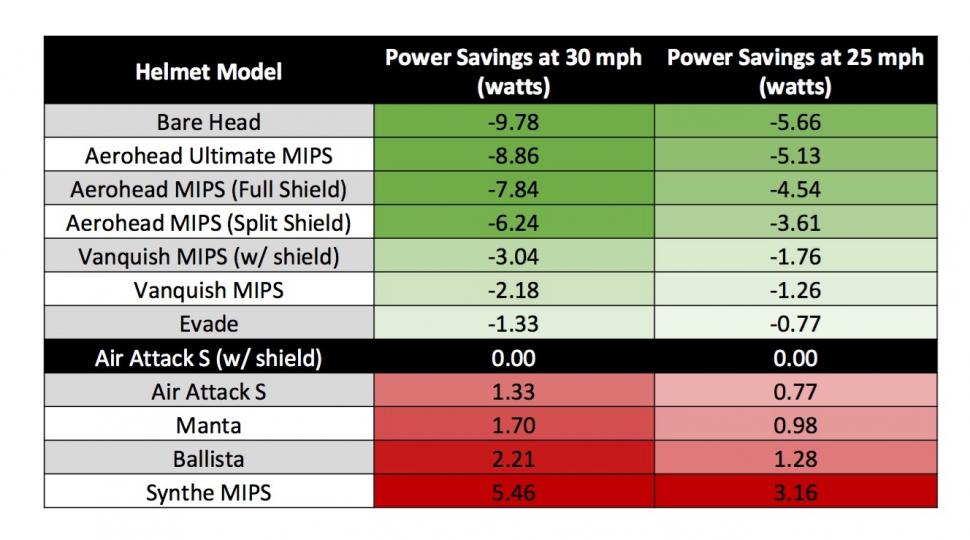 Giro says that the Vanquish MIPS has lower drag than either the MET Manta or Bontrager Ballista aero helmets (yes, it would, wouldn't it?). One thing that should be pointed out is that Giro can’t measure the impact of sweat on cooling efficiency because it has no means of adding that variable into the equation. 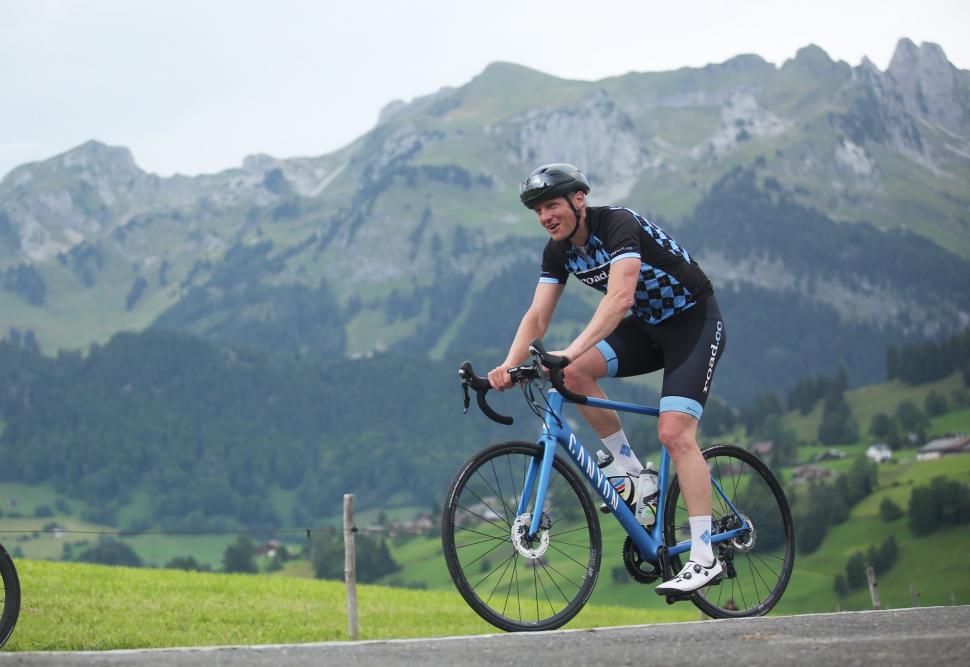 The Vanquish MIPS doesn’t sit all that far behind Giro’s Synthe in terms of cooling efficiency, according to the figures. I must say that surprises me because in use I felt that it was noticeably warmer, although not uncomfortably warm by a long way (and it was 27°C on today’s ride).

You might well know all about MIPS (Multi-Directional Impact Protection System) by now but, if not, head over to its website for all the details and see if you’re convinced of the benefit. The idea, of course, is to provide an additional level of protection in the event of certain impacts. 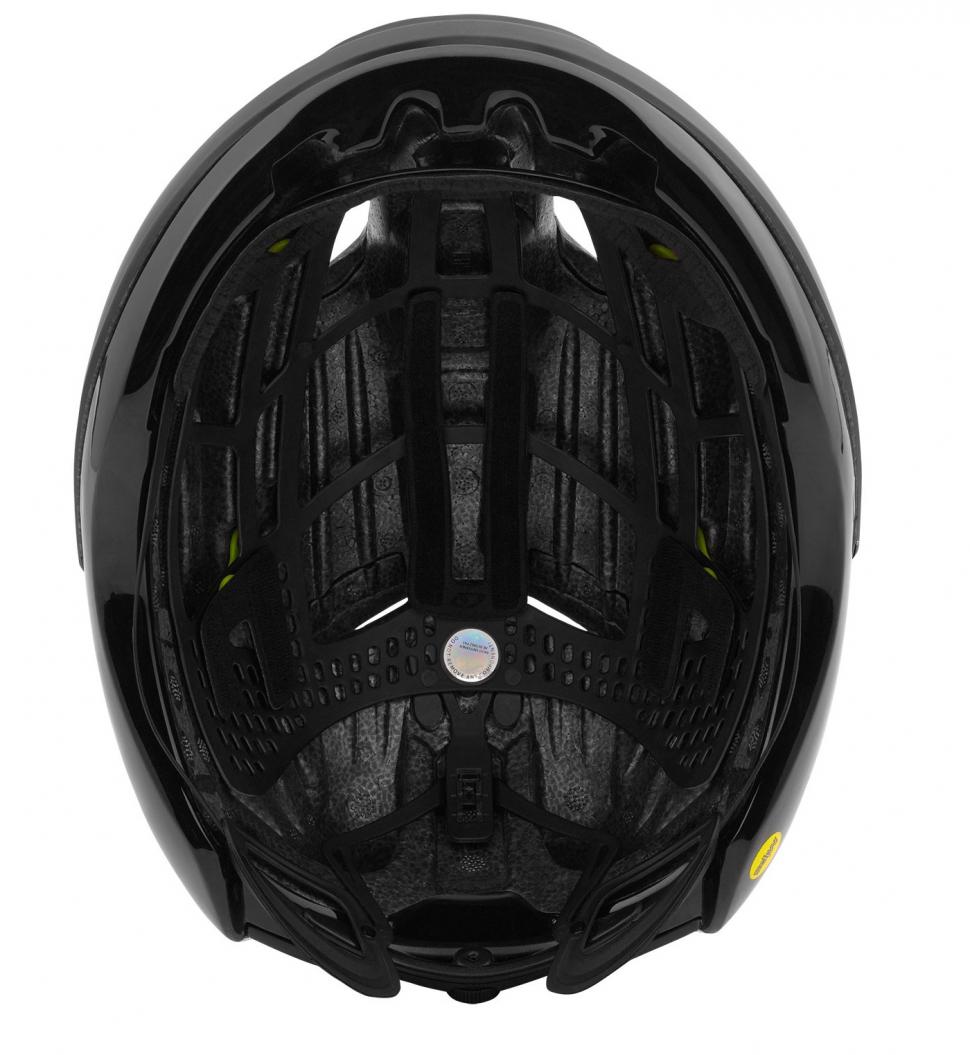 MIPS has been used on many helmets over recent years but what’s new here is the way that it has been combined with Giro’s Roc Loc Air retention system so as not to compromise ventilation too much. Rather than the yellow plastic skullcap of old, this is a minimalist approach that’s said to do the same thing. 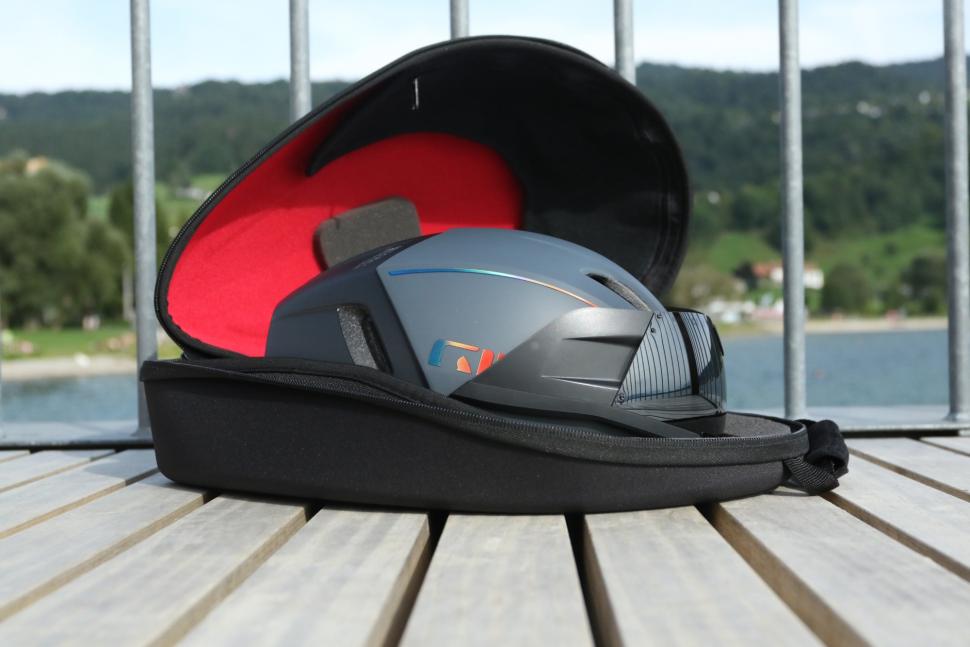 The Giro Vanquish MIPS has an official weight of 305g without an eye shield and 355g with the eye shield. It comes in its own storage/carry pod at a price of £250. Additional eye shields will be available in different colours for €55-60 although we don’t yet have UK prices on those. Shipping will begin in December.

For more info go to http://giro.com/vanquish

1
Police officer caught on camera telling cyclists to ride in single file to be given "education around traffic offences"
2
Footage of cyclist's encounter with mountain goat "on steroids" goes viral
3
Driver "used bus as a weapon" against cyclist, loses appeal over sacking
4
Near Miss of the Day 827: Two close passes and a screenwash shower
5
‘Dangerous cycling is not a priority,’ police force says
6
Cyclist bitten by dog… and then abused by owner
7
Why was Mark Cavendish riding with Lance Armstrong this week?
8
Five-year-old boy killed after van driver knocks him off bike