What I learned this weekend… 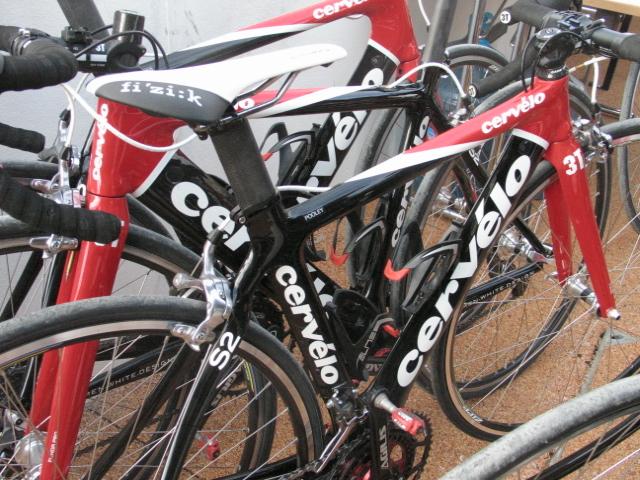 Roger Hammond uses a 53-11 as his gear of choice for Paris Roubaix – particularly on the last few cobbled sections.

Team presentations are a bit odd, good for team bonding I'm sure, and in the Cervelo Test Team's case a good chance to explain what they are about is, but the actual pesentation is still ike some sort of school prize day before anyone's won any prizes (well not this term anyway).

Dura Ace 7900 and internal cable routing (on the Cervelo S2 at least) does not make for clean shifting is the word from the team spanner-men.

Most of the pros will be riding S2s as their training bikes and for the start of the season too and at least some of the men's team will be riding aluminium S1s as an experiment – because, says Cervelo's Gerrard Vroomen, they are better than a lot of the carbon bikes in the pro peleton.

The modern pro puts a lot of thought into his bike and his equipment choices – mind you, he still has to ride what he is given! Lucky boy or girl if he is given a Cervelo S2, S3, or P4 though.

The Cervelo Test Team will use 220 frames this season – 60-70 for the women's team the rest for the men. They don't need as many Zipp 404s, which is just as well cos they haven't got any yet.

It was Thor Hushovd's birthday on Sunday… nice cake, heavy on the cream.

Carlos Sastre is a top bloke – he could have binned our interview (the last of a weekend of interviews) when my cameras batteries packed before we started, but he didn't, he gave me a couple of hours to “re-charge” and fitted me in before dinner… I know who I want to win this year's Tour.