VecchioJo joins in with the team for the Eurobike marathon

It was done in the full knowledge of reluctant stupidty, but pulling a panic all-nighter to get vital work finished before embarking on the most tiring week of the year isn’t probably the best of plans, but needs - and being able to pay for food - must and all that. A sniffly cold is scheduled for ten days time.

It’s Eurobike season, which means most of a week walking round a seemingly infinite number of exhibition halls looking at all the newest, shiniest, lightest and carboniest that the bicycle industry has to offer, which is quite a lot. It seems like the dream job for any bike geek, what’s not to like about gawking at the nicest bikes in the world for days and days, and days, but the reality is joy-crushingly different. It takes a lot of effort to separate the stands of wheat from the booths of chaff, it requires a Herculean effort not to become bike-blinded by the bright lights and millions of cabinets of trinketry as it all cold forges into one large gaudy glittering prize, and as you trudge round yet another massive space full of stiffer but more compliant same things different colour it’s almost impossible not to become cynical about the vast lumbering all-consuming bike industry beast that threatens to suffocate that glimmer of the simple fundamental love of bicycles that keeps your soul alive. Or something. To absorb, digest and process all of this mess and turn it into manageable gobbets for you the dear reader all the disparate elements of road.cc are herded together and squeezed into a camper van for the long trip across Europe to Friedrichshafen in the southernmost bit of Germany. Unfortunately this takes quite a while. Last year we broke the trip by pausing in the Vosges for lunch and a quick bike ride up and down a hill which was a grand idea, a bit of fresh air, a chance to stretch the legs in a hidden part of France, and ease the mounting camper-fever pressure. I still have the odd daydream of moving there, every day.

There used to be a plane that flew straight to the place, which was convenient, but they stopped that so road.cc tried taking a flight to Zurich, then a train to a ferry that chugged us across a lake to Friedrichshafen town and finally a bus to the exhibition halls. It was tiresome, the chances of a team member being mislaid were high and the constant “Trains, Plains and Automobiles” references became weary. So now we pile into a van that doesn’t take too long to smell of five men, and stopping only for petrol, wees and a sleep somewhere in a salubrious mid-France lorry park shamble across the Continent. It’s good for bonding. 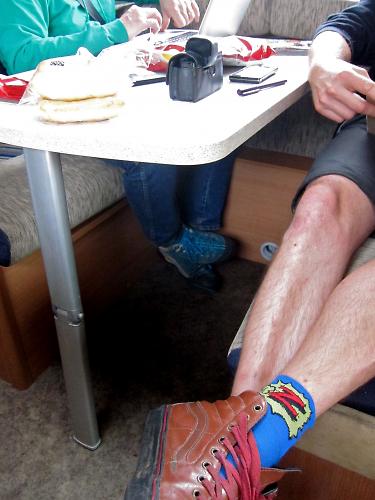 And this is just the beginning of the exhausting schedule, the first few days of Eurobike are set aside for the cognoscenti and liggers of the bicycle trade with the doors only flung open to the great unwashed on the final Saturday. Tuesday sees the Demo Day, based out of town it’s a chance to jump on as many bikes as possible and write a few words about them. Wednesday, Thursday and Friday are there for running around the exhibition halls and trying to see as much as is possible without dieing inside and what could be described as productive work is mostly impossible on the public day when it’s just too busy and there’s only time to tie up any loose ends and see that really important thing you’ve spent all week missing in Hall A4 and wait till 6pm when it’s all over and you can have a beer and think about actually riding a bike. The planned ride on the way down had to be cancelled as we plain ran out of time, rolling into town as it got dark. Trying to hitch the camper-van to mains electricity revealed that we didn’t have the right kind of plug, we solved this problem by finding a caravan lead that ended in an English plug and using a standard £1.99 Euro plug adaptor to fit it in. We’d be fine if it didn’t start to melt, or rain whilst we were asleep, packed like the slaves we are in the van.