Why is some cycling kit so expensive nowadays? The price of the shirt on your back 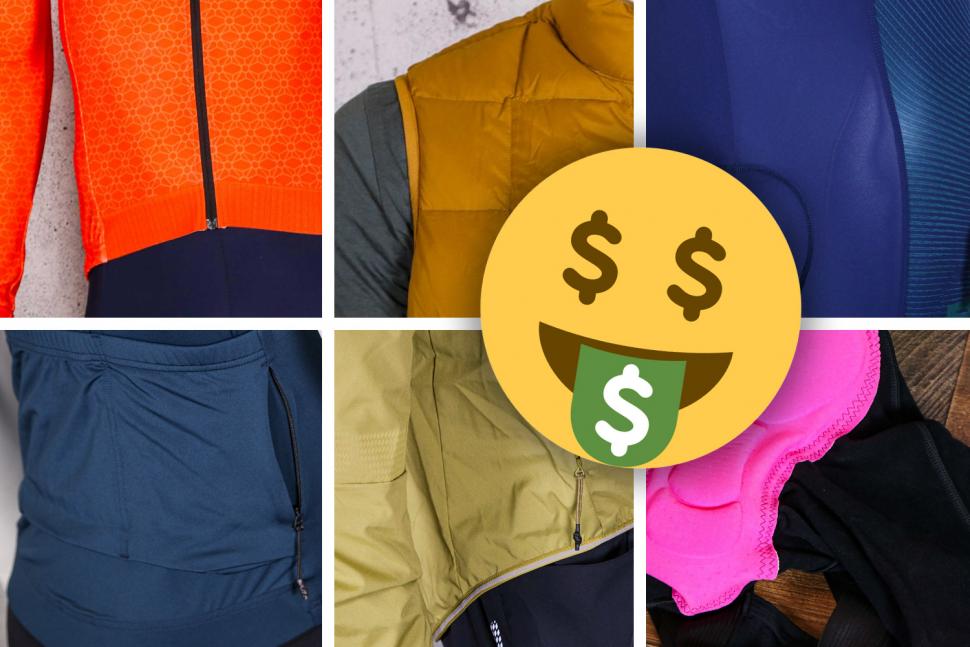 Is cycling kit too expensive Aug 2022
There’s an abundance of trendy, very expensive cycling apparel brands around... but is it really worth it when compared to cheaper options?

If you have a social media feed such as Instagram and you’re into road cycling, you probably get bombarded with videos of ‘picture perfect’ influencers in very similar, but rather nice-looking kit on a daily basis.

These are usually accompanied by links to an ever-growing band of niche clothing brands; some you’ve probably heard of, some seem to be homespun, dropship enterprises.

In so many ways we’ve never had it so good when it comes to choices in our cycling kit… but in other ways you can’t help but feel the Michael is being taken a little in some cases.

It’s hard to believe that it was only in 2004 that Simon Mottram launched Rapha, which as the time very much threw the musette in the face of accepted tradition within the jaded yet bold world of Lycra-led cycling. When Rapha first appeared on the scene, it has to be said that they were met with a love-hate response from the ‘establishment’.

When a jersey went from costing £30 to over £100 and came made from merino wool in seemingly bland colours, I guess it was only natural that the old guard raised eyebrows, and few gave them much of a chance of surviving in the marketplace.

Oh how times change, and Rapha’s master plan (inline with the rise of the internet and globalisation) has not only changed the way cyclists perceive their kit – and the cost of it – it’s led to a whole new tidal wave of smaller high-end (or perhaps just high cost) brands seeking to follow their example. There’s little doubting that the profusion of such ‘cool kit’ and the bikes that have risen to financial challenge have changed the image of the sport.

The ‘up-valuing’ of cycling has also helped to attract a new demographic of people into the sport; those who would probably have quivered and broken into a sweat at thought of slipping into 80s dayglo Lycra, which is all good for cycling.

But… why does this kit cost so damn much, and is it justifiable in practical terms? Or is it merely a case buying an assumed brand name and paying way over the odds for it?

This is a tough one, as the cost of cycling overall has risen dramatically in recent years. As long as people keep buying into expensive kit that trend will continue, and if you can afford it and it that makes you happy, why not?!

Nowadays you can but a cheap jersey or even shorts for about £6 online from the Far East, pay £60 for an offering from a long-established brand, or double that for something khaki with a few big letters on it. Often all of these jerseys (or shorts) were made in the same region, as opposed to facilities owned by the brand.

There’s nothing wrong with this in some ways, as consumer demand has driven outsourcing for decades. Just about every designer clothing brand, or any other brand for that matter, outsources as opposed to manufactures.

Even some of the major premium European brands that proudly tout their national and established brand cred do not actually make anything but samples these days. It’s far more cost-effective for them to outsource production and to employ strict quality control. And it works, for them.

That said, there are still several clothing brands out there that do still manufacture, often those in the custom kit arena. Although this tends to make things more costly overall for them, they do benefit from stricter quality control and being able to implement technology and design changes much faster than others; yet on price these brands are often mid-range, thus offering excellent and practical value.

So, outside of the basic materials and labour costs, what is it that makes certain brands so much more expensive than others? Ironically it’s often the custom and larger, more established brands that put in the most work and investment when it comes to advances in materials and new technologies.

Look to the national teams here and you will often see who is producing cutting-edge kit. These teams generally prioritise medals over sponsorship, and as such they want the fastest and best available kit. This is especially so when it comes to track clothing, where fractions of seconds count.

Developing a speedsuit for a high-level national team can involve months of testing and development, material sourcing, patenting and the UCI regulation-bending that goes with that. This can mean hundreds of thousands goes into that speedsuit, which is why many touted Simon Yates’ speedsuit as costing £3,000, all of which does need to be earned back by the manufacturer.

Sponsorship and marketing is perhaps the biggest expense (outside of operating costs) of many brands, and supplying an average WorldTour team can mean around 5,000 items of various pieces of kit (including socks, gloves, hats etc) each year, plus the ever increasing financial commitments to a team, all of which have to be recouped.

As for the ‘designer’ kit makers, with some it’s much easier to see where they spend their marketing budgets, while many of the smaller brands have much more an influencer-led attack. This is a whole lot cheaper, and does at times make their costs harder to count.

Is this kit really that much better? In many cases boutique high-end cycling kit can be superb, but on the other hand I’ve personally not always found that to be true, and even between different seasons the quality can often differ. Although much of it is of better quality, and there’s more actual ‘design’ going on compared to ultra-cheap kit from the Far East, at times it’s hard to understand how that 20-fold price increase can be justified.

As for the mid-range and custom kit out there, it may not have that D&G or Gucci-like appeal, but it’s not hard to justify in terms of practical value. The great thing is that we now have far more choice, although I do struggle to understand the wildly differing price points when it comes to cycling clothing.