Riding the Paris-Roubaix pavé: it's all about the bike… and the tyres… and the…

Riding across the pavé in the tyre-tracks of legends, having the right bike setup smooths out the bumps. Well, some of them
by David Else

This coming Sunday (April 8th) the pro peloton will be pounding its way across the infamous pavé in this year’s Paris-Roubaix road race. Last Sunday (April 1st) the amateurs had a chance to sample those same jagged cobblestones, thanks to the Paris-Roubaix Challenge sportive. Given the date, it might have seemed a foolish idea to ride 95 miles across northern France on a zig-zag route with 19 pavé sections, but it turned out to be a surprisingly enjoyable - though unsurprisingly tough - day out on the bike.

My story begins back in November, when a casual comment that “I wouldn’t mind sampling the pavé one day” led quickly to a friend booking the hotel and ferry, and then telling me all I had to do was get my entry in.

So it was time to start training again, as my intended winter rest period went out the window. I mixed speed sessions on the Turbo with some long hard rides on the road - often in cold and wet conditions - but convinced myself it was worth it, as the Paris-Roubaix weather can be notoriously miserable with rain, sleet and sometimes even snow turning the cobbles to quagmire. It’s all part of the legend, and part of the reason why the race is known as the Hell of the North.

But even more time-consuming than the training was deciding what bike and kit to use. My first step was to get some advice, so I spoke to everyone I knew who’d ridden the cobbles before, and also posted a message on the road.cc forum (which is still going here: /content/forum/48339-paris-roubaix-challenge-cobbled-roads-uk). I got a huge amount of useful feedback, and took the best bits to help me build up a bike that was - it turned out - perfect for Paris-Roubaix.

The key decision was the frame material. I originally considered using my Giant carbon sportive bike. Carbon is strong - and good enough for the pros. My bike is not pro standard, but it’s light and responsive, with relaxed angles and a long-ish wheelbase, with (I hoped) just the right amount if flex to take out the worse of the vibrations. But there was a downside: carbon stands up less well in the case of a crash. And the chance of a crash in the Paris-Roubaix is pretty high. It wasn’t just cracking my frame that I was worried about; I was worried about cracking it during the ride and not being able to finish.

So the next option was my old Marin aluminium winter training bike. It’s a hybrid-style frame with a long wheelbase, with plenty of clearance for big tyres, and I’ve used it successfully on a couple of cyclo-cross sportives (as well as just general playing around off-road) so I knew it would be relatively comfortable. But then my inner pessimist kicked in. Aluminium frames have been known to crack, especially on a bike that’s been used and abused for several years like this one. Although it seemed perfectly fine, once again I didn’t want to risk a crack appearing when I was halfway down the Trench d’Arenberg.

Next, I turned to steel: light, strong and reliable, with a bit of give for the worse of the pavé. My dad offered me the loan of a classic hand-built MB bike from the 1980s. The bike had sentimental significance and my dad was delighted to see it ridden on a Classic route.  Things were looking good, but the clearances were too tight for the larger tyres I planned to ride, and that option had to be abandoned as well. 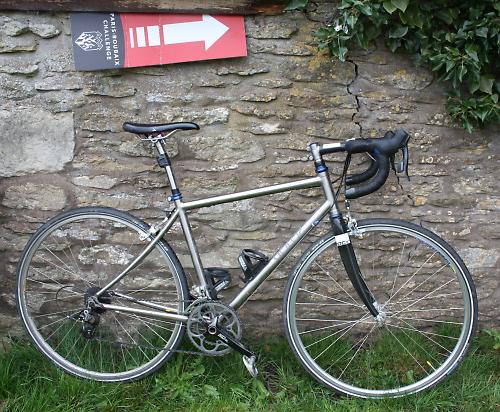 And here it is…

Then I got a stroke of luck, and was offered the chance to borrow a Road Won titanium frame from specialist Ti outfit Qoroz. With its long wheelbase, compact geometry, sloping seatstays and carbon forks it proved comfortable on several off-road outings, and impressively lively on the road. It was light too, and I was confident it had the strength to cope with the worse of the pavé - and a pretty good chance of surviving a crash should the worse happen. Even better, it had the clearances I needed to fit in some larger tyres. Which brings me to…

To cope with the pavé, I considered a wide range of wheels and tyres, including a tubs and sprints, cyclo-cross tyres, and tubeless combo of Fulcrum 3s and Hutchinson Intensives.

But in the end, I kept it simple and used a favourite pair of hand-built Mavics: an Open Pro rim on the front, with an Open Sport rim on the rear, teamed up with 105 hubs and 36 spokes in both wheels. Not the lightest option, but pretty bomb-proof, with a reputation for reliability that’s almost as venerable as the Paris-Roubaix itself. 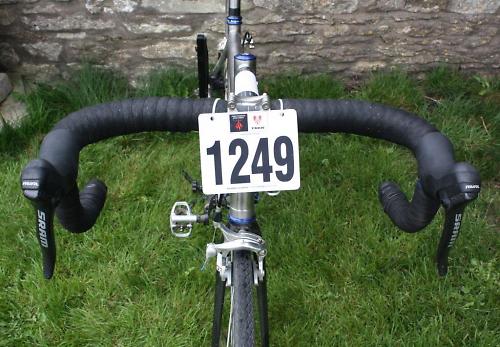 Onto these wheels I fitted a pair of 28mm Schwalbe Marathons. Yep, the commuter favourite, but the extra width allowed me to run the tyres at 75psi front 80psi rear. My theory was that this would be soft enough to absorb the worst of the vibrations on the pavé, but still high enough not to feel sloppy when riding on the road sections. Meanwhile, I reasoned, the Kevlar anti-puncture strips and strengthened sidewalls would protect me from punctures - especially impact (or ‘snakebite’) punctures, the most common cause of flats on a course like this.

And, dear reader, I’m delighted to say it worked. At every section of pavé, the side of the road was lines with other riders mending punctures. Whether it was luck or judgement, I don’t know, but I covered the 95 miles without a single puncture. And where other riders were being vibrated to pieces, the 28mm fat-boys took out the worse of the bumps and allowed me to pound across the cobbles without having my internal anatomy rearranged.

Top marks must also go to my wheel-builder. Despite the hammering, my wheels were as true at the end of the ride as they were at the start. Having a good wheel-builder is far more important than having a good tailor. 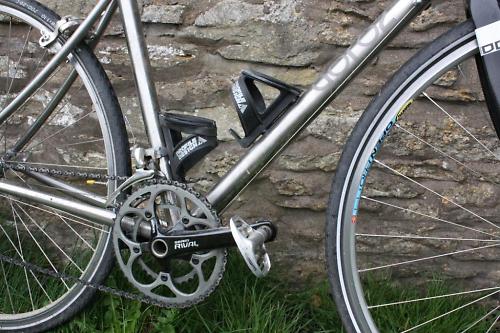 The transmission on the bike was a standard compact with a 10-speed cassette. There were no significant hills on the course, so I stayed mainly in the middle of the range. I used a SRAM rear mech, a Shimano front mech and SRAM shifters.

Following advice from others on the road.cc forum and elsewhere, on top of the wheels and tyres, I made a few more adjustments to my bike to cope with the rough conditions.

I used old-style Shimano 2-bolt SPDs pedals with the extra base-plate around the clip, to spread the load of the vibrations coming into the soles of my feet. I also fitted a comfortable old saddle with a bit of extra padding where I reckoned I would need it most.
On the front end, I used double thickness handlebar tape, and also put sticking plasters around my fingers to prevent rubbing from the shifters when riding on the hoods.

I used some fairly basic bottle cages made of plastic that completely enclose the bottle and stay shut with a rubber band. I replaced the rubber band with a piece of old motorbike inner tube, and it held the bottles in place perfectly. Likewise I used a mini-pump that was securely held in place by a Velcro strap. In contrast, the pavé sections (and even some bits of road) were littered with bottles and pumps that had vibrated loose. I even saw a whole saddle lying in the verge. 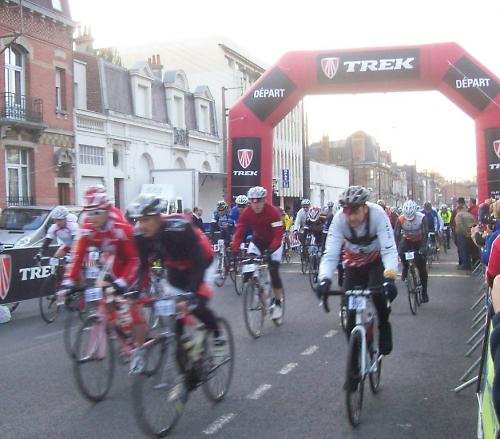 And what of the ride itself? It was hard, but immensely rewarding. To quote Geraint Thomas after that incident-ridden early stage in last year’s Tour: “I enjoyed every minute of it, to be honest”.

The start was cold, but the weather was dry, and by mid-morning the sun came out to turn the early patches of mud into dust. The most memorable sections were, of course, the classic Arenberg Trench and the right-angled bends leading to the famous Carrefour de l’Arbre. 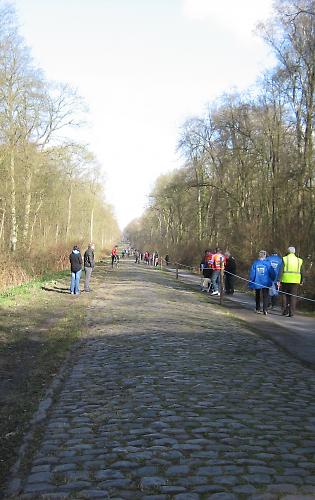 Even with all my special adaptations on the bike, the constant vibrations eventually took their toll, and last 20 miles were especially draining, with pavé sections coming right to the bitter end, and the nagging northerly wind never letting up. But with gritted teeth (plus, in my case, a large caffeine gel with two painkillers on the side) I kept up a decent speed as I finished at the legendary Roubaix Velodrome, where a half-lap of the track polished off a most formidable ride. 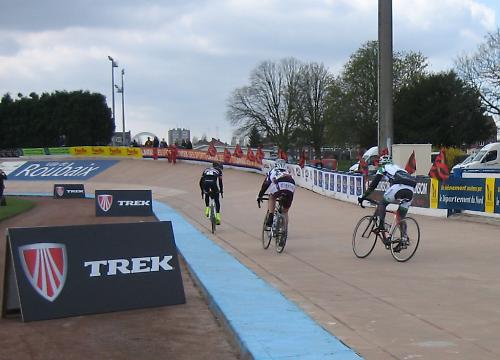 My finish time was 5hrs 3 minutes - about 40 minutes behind the winner - not bad for an old geezer, if I say so myself.

Would I do it again? Maybe. The Paris-Roubaix Challenge was a fantastic event - well-organised and with a great atmosphere - while riding the 100-year-old classic route in the tyretracks of so many legends is an amazing experience for any cycling fan. 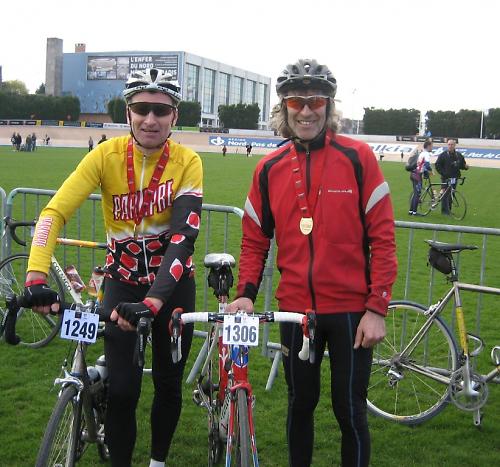 Would I use the same bike and set-up? Definitely. I reckon I got the bike about as comfortable as it could be, without paying a price in loss of performance. Of course, it would be unrealistic to say it all came down the titanium frame. The biggest factor in getting through unscathed and in a half-decent time was probably the tyres. But the overall package of frame, tyres and wheels - and even that double bar-tape - gave me the confidence to ride the cobbles assertively, the peace of mind not worry about damage to rider or machine, and the freedom to really enjoy the Hell of the North.