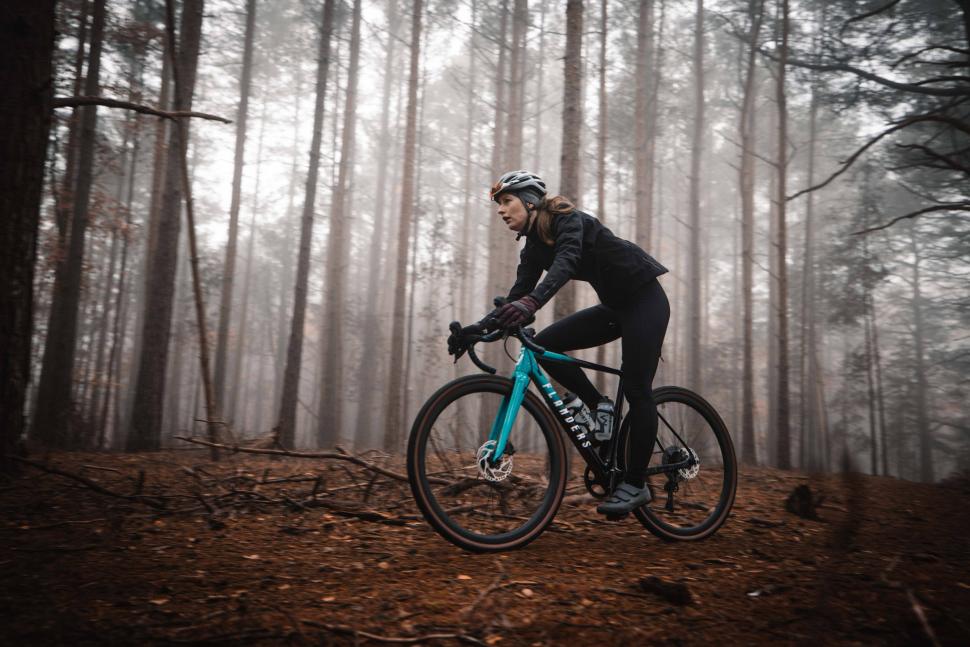 Wheel size is a big issue, especially when it comes to gravel bikes. Here's everything you need to know to make the right buying decision
by Anna Marie Hughes

Terrain and distance can vary a lot in gravel riding, and so do the types of off-road bikes available to you. While 700c wheels are standard on road bikes, bike manufacturers also use a smaller 650b size wheel for gravel bikes as they offer an alternative set of qualities and performance benefits. 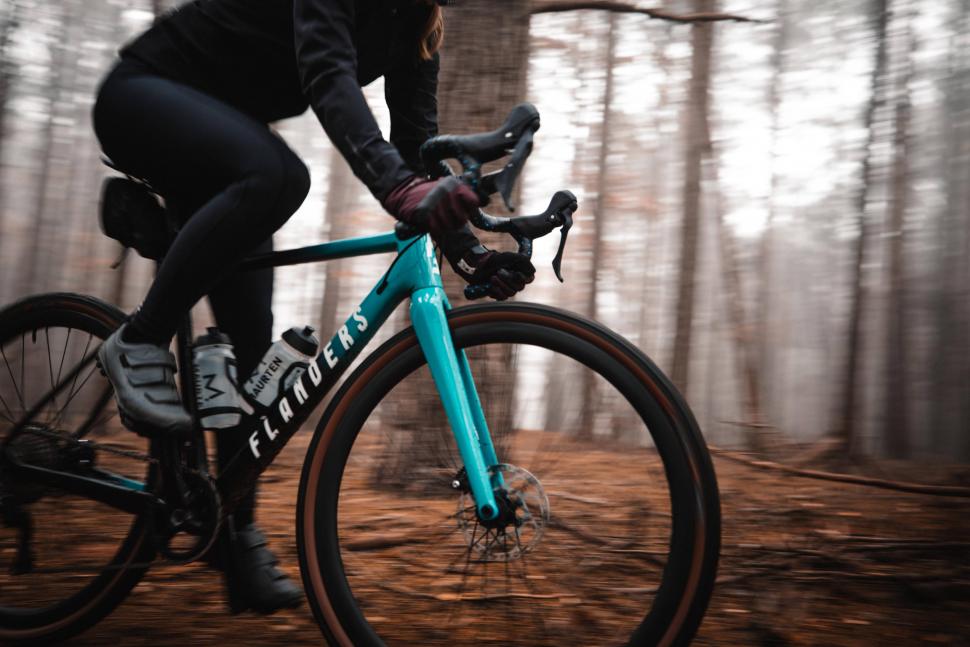 We spoke to Dov Tate of the British wheel brand Parcours, which has 650b and 700c versions of its Alta gravel wheel, about the benefits of each, and how the size change may affect your riding so you can go about your buying decision fully informed.

It’s not just size that matters…

“What needs to be considered above and beyond just the wheel selection is what type of tyre you’re going to run,” Dov acknowledges. “I would argue that the tyre is probably going to have a bigger influence on the ride performance, quality and ride feel of your bike, but the wheel is a vehicle for that.” 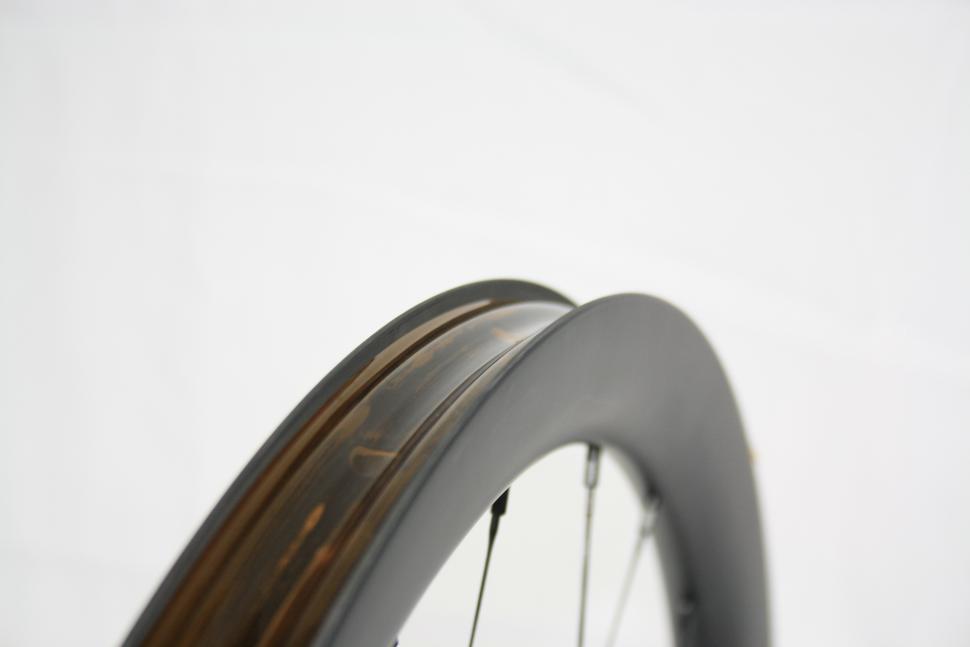 If you’re looking at running a much wider and therefore bigger tyre, that’s going to be one of the drivers towards looking at a 650b wheel. “It makes logical sense that if you want to get a bigger tyre, you need a smaller wheel in the same space,” Dov says.

By the time you get to the smaller 650b tyres, you’re very much in the realms of the bigger 700c tyres out there.

Dov recommends starting with the tyre that is going to suit you best, then you should look at which wheel is going to enable you to run that tyre.

It’s important to understand the effects of the wheel and tyre combination together. In terms of total diameter (including tread), a 650b fitted with a 47mm tyre is a similar diameter to a 700c wheel fitted with a 28mm tyre. 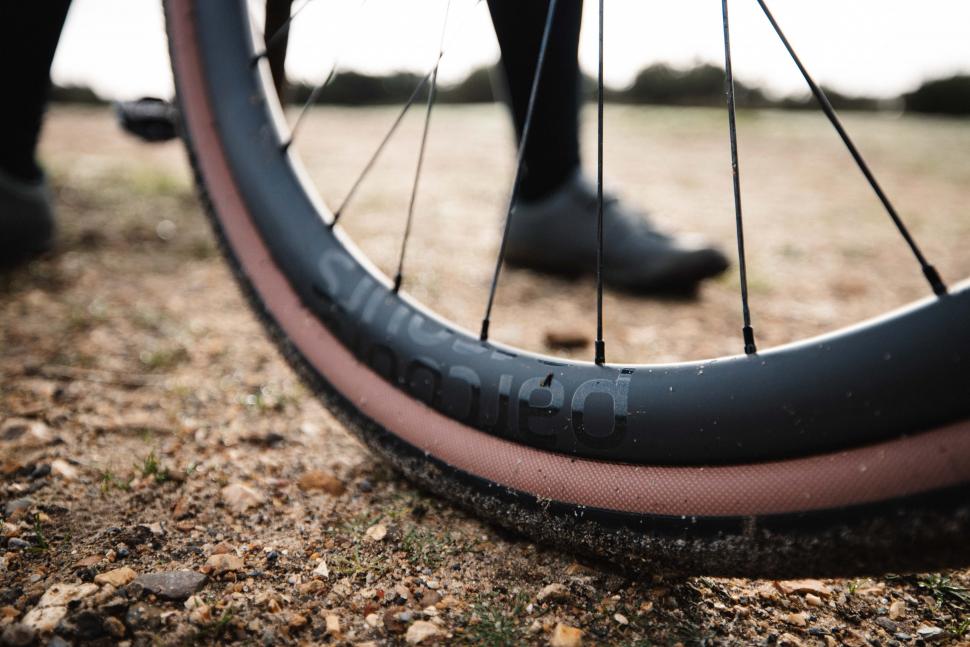 But, realistically, no one is deciding between a 650b wheel with a 47mm tyre and a 700c with a 28mm tyre: “You’re not quite comparing apples to apples when it comes to the overall diameter at that point,” Dov says. “The overall diameter of your gravel setup on a 700c wheel is going to be slightly larger than the equivalent setup on a 650b.”

Consider how much you’re mixing up the terrain

The 650b is better suited to rougher terrain with a loose surface, “essentially where you’re looking to be able to run a wider tyre which is going to allow a smoother ride because you can run a lower pressure,” Dov says. “Then on the loose surface, a wider tyre gives you a wider contact patch which will help you with grip and traction.” 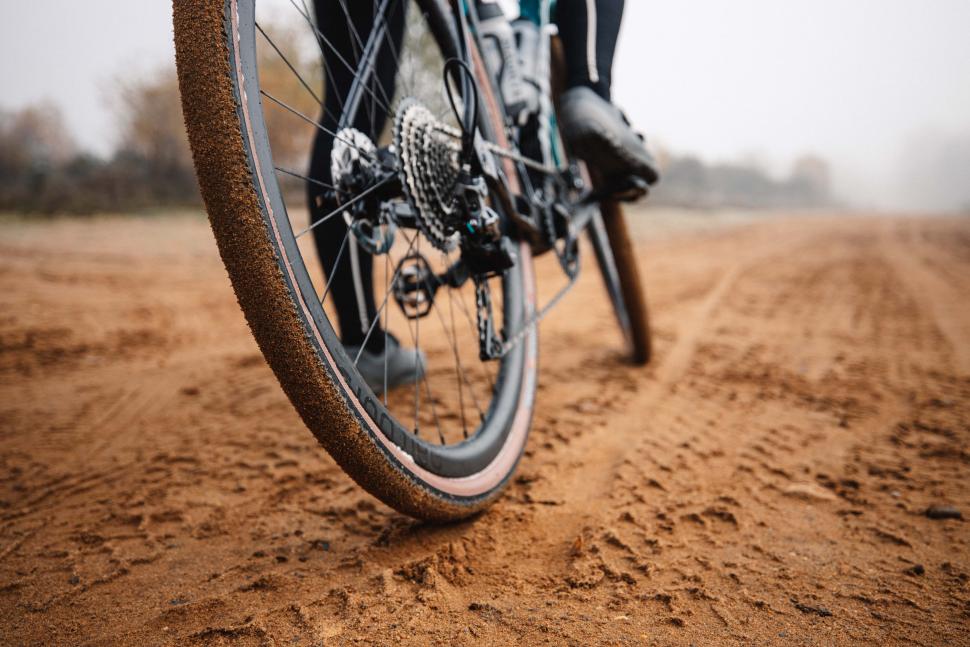 The 700c is less suited to the technical singletrack that 650b wheels usually excel at; for the bigger wheel size think more of connecting gravel, harder bridleways and roads that have mixed surfaces.

“When you’re on and off-road, then I’ll absolutely be steering somebody towards 700c largely because you’d be running a slightly narrower tyre which is going to perform better on those surfaces,” Dov says.

Rolling over the rough stuff

Let's next look at rollover. To understand how rollover comes into things let’s start with the analogy: “If you think about driving a hatchback with small wheels, it’s a lot harder to get up onto a kerb than driving a 4x4 with massive wheels. In the same way with a 700c, if you’re going over a big obstacle you’re going to be more easily able to roll over it than with a 650b, which is a smaller wheel,” Dov explains.

If you were to compare a 48mm tyre on 700c wheels with the same 48mm tyre on the 650b wheels, you will find the 700c glides over the bigger stones and the generally rougher terrain a lot more easily.

However, Dov notes that this removes the tyre from the equation. “If you’re running a bigger tyre on the 650b that reduces the difference to the point where it’s probably not going to be a main driver for your purchasing decision.”

As smaller wheels get hooked up on bumps more than bigger wheels, the latter will give you a smoother ride (assuming that the tyre width – and total volume – is kept the same). That’s why some bike manufacturers, such as Canyon with its Grizl, are producing bikes that can take a 700 x 50mm set up; these are best for when it’s roughest.

But that wheel and tyre combination is so big that it means a 650b wouldn’t be compatible with that frame anymore – the handling would be thrown completely off – and that also means swapping in skinny 700c tyres, such as 28 or 32mm, would compromise the ride feel too.

That doesn’t mean you can’t ride a Canyon Grizl with skinny tyres, it’s perfectly possible, but you aren’t getting the best out of the bike.

If you just want to ride rough stuff, a wide 50mm tyre and 700c wheel is the way to go. If you think you’d like to switch between the smooth and rough, running 32mm road tyres one day and 2.1 inch 650b tyres the next, you’re best off going for bike which is rated for that size of 650b tyre and that can only take 700c tyres as wide as 45mm.

A wide 2.1 inch (53mm) 650b and a narrow (for gravel) 32mm 700c have similar diameters (once you take tread into account, which will be deeper on the 650b wheel), so swapping between these two wheels doesn’t have much of an effect on the handling of the bike. 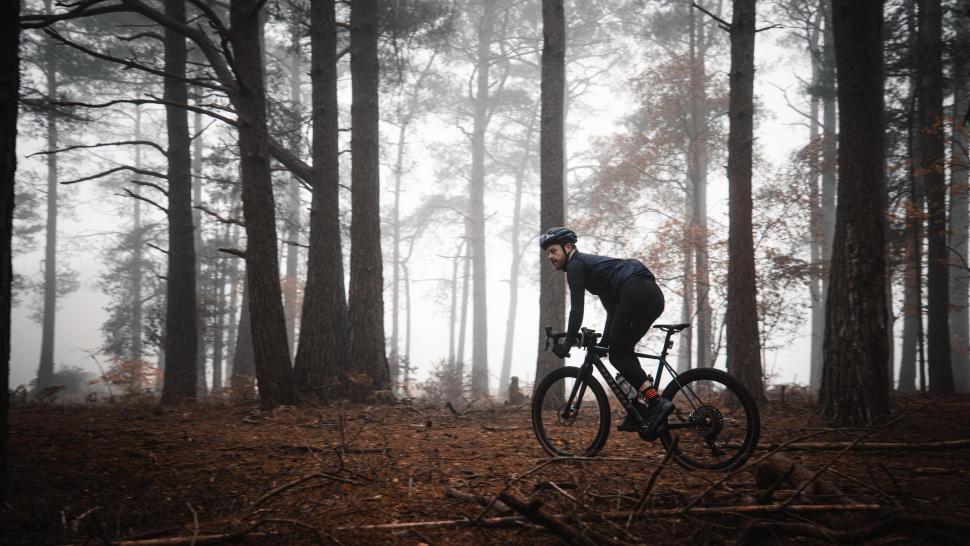 If you want to ride rough off-road trails but also keep the option of going fast on the roads another day, having both 700c and 650b wheelsets makes a lot of sense.

Looking at 700c/40mm versus 650b/47mm, which Dov reckons is a fair comparison, then the overall smaller wheel (with tyre included) is the 650b, and he explains what's going to make the handling slightly snappier.

The overall smaller wheel is going to reduce the trail of the fork, Dov says, because “at that point, the fork angle has a much greater impact on handling and therefore reduces the trail, which again makes it much sharper handling at the front”.

While you can swap in different wheel sizes you need to consider the initial geometry of the bike and the wheel size the frame manufacturer has specced.

“Frame builders will say a frame is designed for running with a certain size wheel, and if that’s 650b odds are it’ll probably still clear a 700c,” Dov acknowledges, “but the geometry of the bike has been designed so it delivers the right handling characteristics with a wheel-tyre package of the right diameter”.

If, for example, you have a gravel bike that’s been designed around a 700c wheel fitted with a 40mm tyre, Dov says, “the frame builders will have designed the fork trail geometry around the fact that gives you the right level of responsiveness at the front end.

“If you all of a sudden swap that out for a 650b with a 47mm tyre, you’ve reduced the trail and all of a sudden it may well get to the point where it feels a little bit too lively and flighty at the front end.”

So basically, don’t just swap out your 700c/40mm wheel for a 650b/47mm combo to better cover going over rougher terrain unless you’re confident the difference that’ll make to the overall geometry of the bike is what you’d prefer - that difference being a snappier and more responsive ride feel.

Does rider height make a difference?

Smaller riders don’t tend to get on well so well with bigger wheels because they are proportionately so much larger. 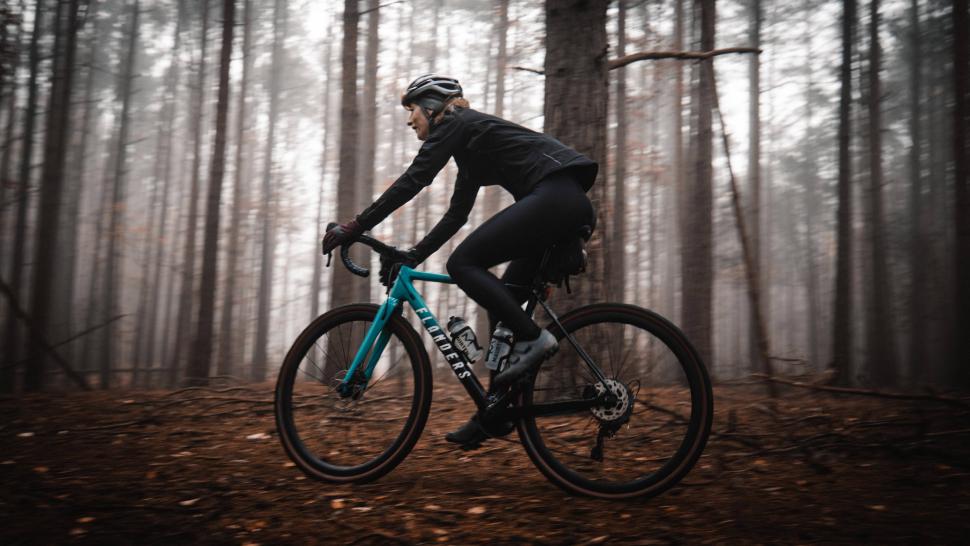 If you are smaller, you might have a better feeling bike if you go for a wide 650b rather than 700c wheels.

Loaded up for bikepacking

With a 650b wheel, the spokes are shorter and, Dov explains, “if you put the same force onto a shorter spoke it’ll move sideways less, deflect less, which makes for a stronger wheel.”

That’s why on Parcours' gravel lineup the 700c Alta gravel wheels have 28 spokes, whereas the Alta 650b have only 24 spokes. Dov says you don’t need those additional spokes to deliver extra stiffness - you can still achieve the same ride qualities.

“You want a robust wheel, but from our perspective when we think about our weight limits or our tolerances on the wheels, our gravel wheels are very much designed with bikepacking in mind, so both [650b and 700c]  wheels are perfectly suited for bike packing and loaded riding,” Dov says. “You’re well within weight limits for that.”

So, what is best for bikepacking? Well, Dov reckons that’s going to come down to whether you want to run a much bigger tyre to have a more compliant ride. From a clearance perspective on your frame, you’re likely to be better off with a 650b wheel as that’ll allow you to run a bigger tyre.

650b wheels tend to be lighter as they’re smaller so less material is used to construct the wheel. The lighter 650b wheel will accelerate faster Dov notes, whereas the bigger 700c wheel will maintain speed better because it’s heavier. Dov adds that the 700c tyre will also roll a little bit faster because it has lower rolling resistance.

“Generally speaking, the narrower the tyre, the shallower the tread and therefore the lower the rolling resistance,” Dov sums up.

“Using the same tyre you will feel quicker, snappier accelerations with a 650b just because the wheel is lighter, but then again, most people would run a 650b with a wider tyre - the tyre is therefore going to be heavier, so that would kind of nullify any advantage.”

As it’s wider there’s more material and you’ll usually find more tread on the 650b because it’s always designed as such - people tend to run a 650b wheel because they want more grip and traction.

For gravel racing, Dov says he’d steer somebody towards a 700c wheel unless they’re going over super rough terrain and require that additional volume found in a bigger tyre fitted on a 650b wheel.

Which wheel size do you ride and why? Let us know in the comments as always.