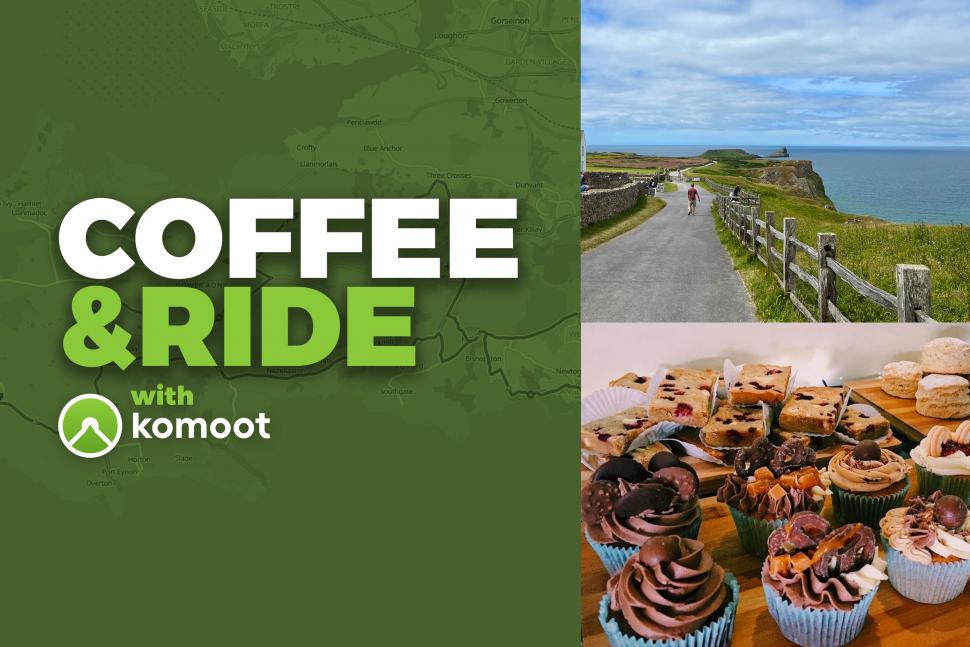 A few hours around the Gower: Jamie's coffee & ride on the stunning South Wales coastline

This route traverses Britain's first Area of Outstanding Natural Beauty, taking in beaches, hills and of course an all important coffee stop
by Jamie Williams

It's time for the latest instalment of Coffee & Ride where we bring you our top cycling-friendly cafes and some great routes to go with them month alongside our friends at komoot. This month's ride comes to you from the gorgeous Gower peninsula, that I have a serious soft spot for despite living in the Mendip hills.

I might now live in the Mendips, but whenever I get the chance I like to head back to Swansea and the Gower peninsula to retrace the route of one of my favourite university club rides. The route combines many of the Gower's highlights such as Cefn Bryn, Welshmoor and – the one place in the UK that will force me ride an out-and-back – Rhossili.

Once you've conquered the lumps and bumps of the Gower Peninsula, made Britain's first official Area of Outstanding Natural Beauty back in 1956, you'll have most definitely earned yourself a stop at one of the many cafes along the Mumbles/Swansea seafront. My personal favourite, Ripples, is a bike-friendly stop-off serving homemade ice cream and cakes, while also catering for vegan and gluten-free mates.

For the majority of riders the route will start in Swansea, which also happens to be Britain's wettest city! I've tailored this route to start from the Recreation Ground car park as it's a central location.

As we head towards Mumbles you're faced with a choice: to take the seafront cycle path or stick to the road. Now, this is neither the time nor place for that debate, but I personally tend to stick to the bike path as it's well-kept, segregated (by a painted line) and quite obviously traffic-free. That said, if average speed is your priority or the seafront is packed on a busy summer's day, then the road is probably the better option. 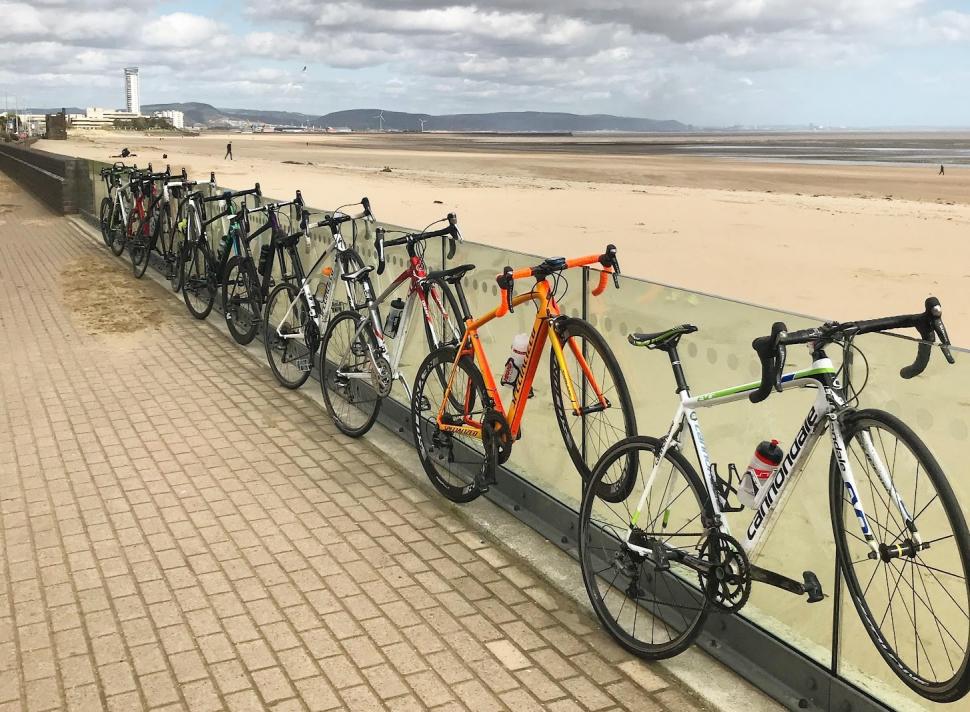 Whichever you choose you'll have no choice at the far end of Mumbles as you pop out and head up a gentle incline on the road between the cliffs.

Apparently, the name Mumbles is derived from the French word mamelles, which means 'breasts', and originally referred only to the two islets at the end of the promontory, but now refers to the entire village. You'll be able to see the islets on your left as you pop out the cliffs at the Big Apple. You'll know exactly what I mean when you see it!

As you reach Joe's Ice Cream Parlour you'll want to take a right and start climbing, unless you're equipped with a mountain bike. As you follow the road there's not too much of note, but you will begin to get glimpses of the south Gower coastline through the hedges.

When you reach the end of the road you'll want to take a left and descend Caswell hill with caution (but also holding as much momentum as possible). It's well worth it though as the climb up from Caswell has been recently resurfaced, and there are stunning views off to the left. This surfer's paradise really is a pretty part of the world!

The top of Caswell hill has some pretty brutal gradients on its final sections but thankfully this doesn't last long. It's at this point if you're looking to extend the route that I would head off to Three Cliffs Bay. If you're not in the mood for that though, then take a right, then a left at the end of the road to descend down Parkmill hill.

Shout-out to the Little Valley Bakery which sits at the foot of the descent. They make some stunning bread and pastries which supply the more upmarket cafes of Swansea.

We're now on South Gower road which is rolling, to say the least; however, you are rewarded with views of the coastline off to the left. We're following the south Gower road all the way until we reach about 30km, at which point take a right in Scurlage to complete the out and back part of the route to Rhossili. 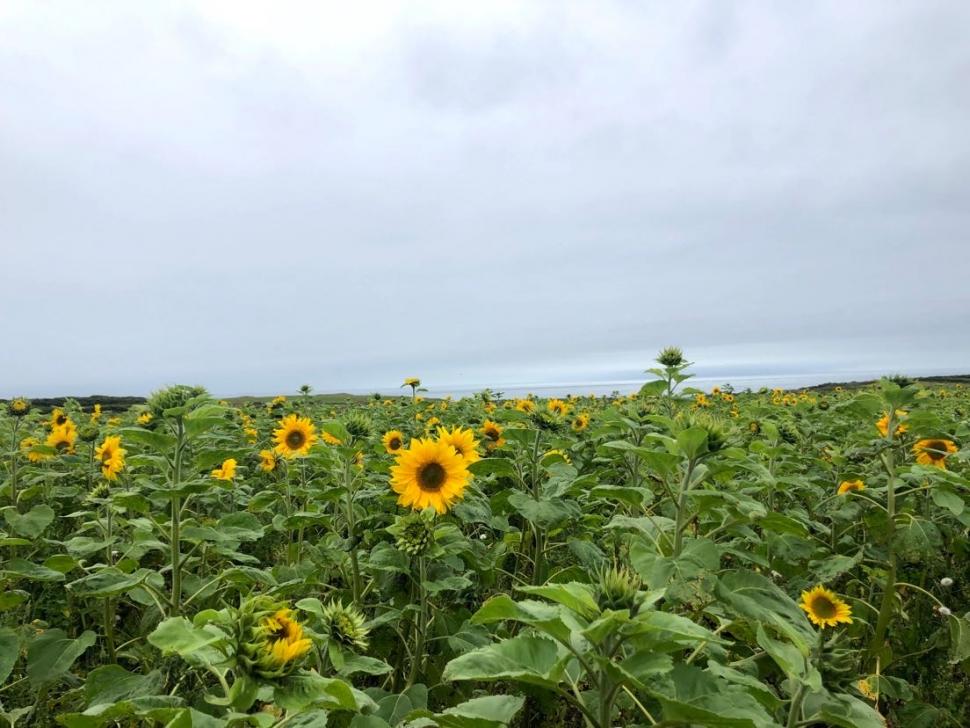 Again this road is rolling but usually pretty quiet for traffic. Towards the end, depending on the time of year you'll ride past the famous sunflower fields with a view out over Worm's Head island which can be accessed for just 2.5 hours a day (and not by bike) 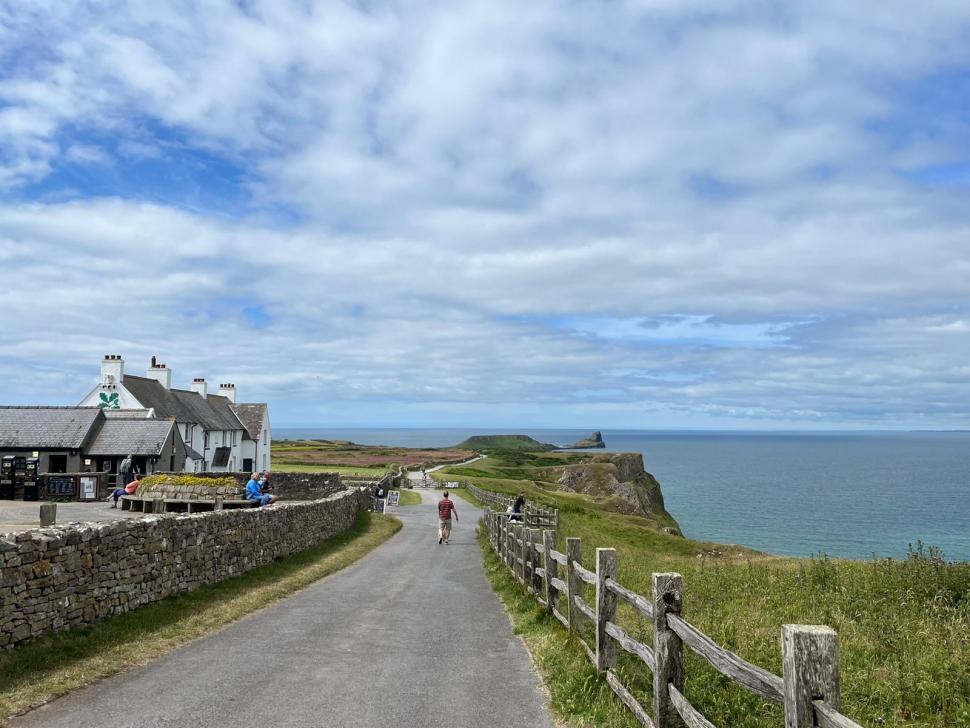 Rhossili beach is a behemoth, only noticeable from the ant-like specks of walkers and paragliders making the most of the steep cliffs. Depending on the tide you may also see the scattered remains of a shipwreck now claimed by the beach, and it's not unusual to see giant works of art drawn in the sand (the coastline in the distance is Pendine sands - home to many a land-speed record attempt). 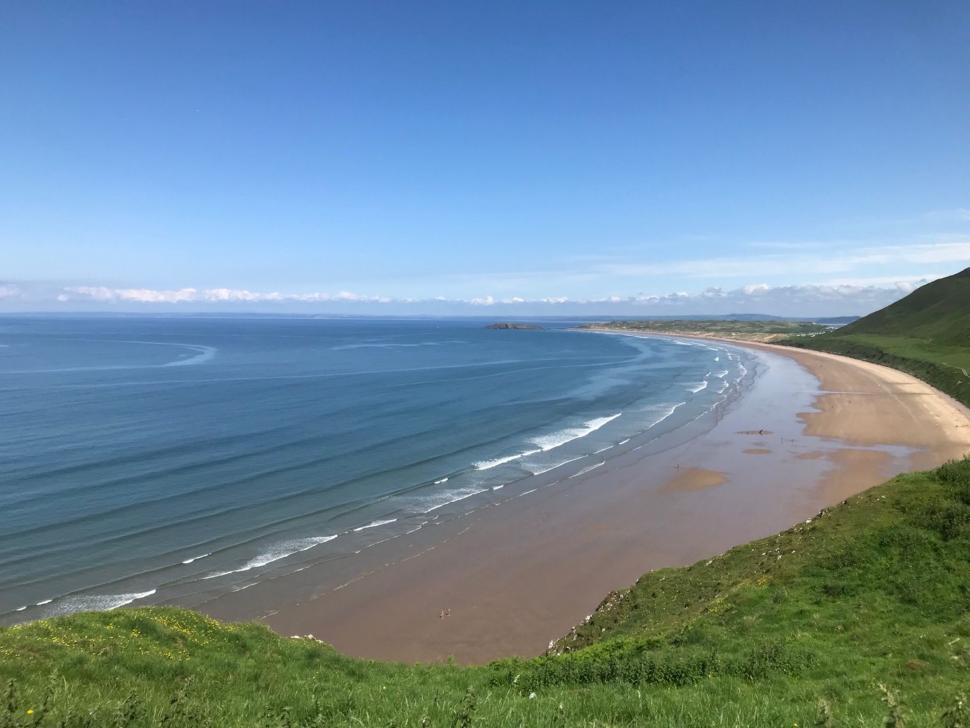 As we clamber back onto the bike we have no choice but to retrace our steps back to Scurlage, at which point we're taking a left and then another left soon after towards Burry Green. Before reaching the green we're going to take a right and start the main ascent of the day, the west side of Cefn Bryn.

The climb will take us to the highest point of the Gower, Cefn Bryn; but first, we have to surpass the 127m of vertical elevation gain in the best part of 3km.

You'll have no doubt noticed by this point that you have to traverse a cattle grid right at the steepest part of the climb, not everyone's idea of fun but it does mean that we're joined by the friendly Gower ponies and cows. 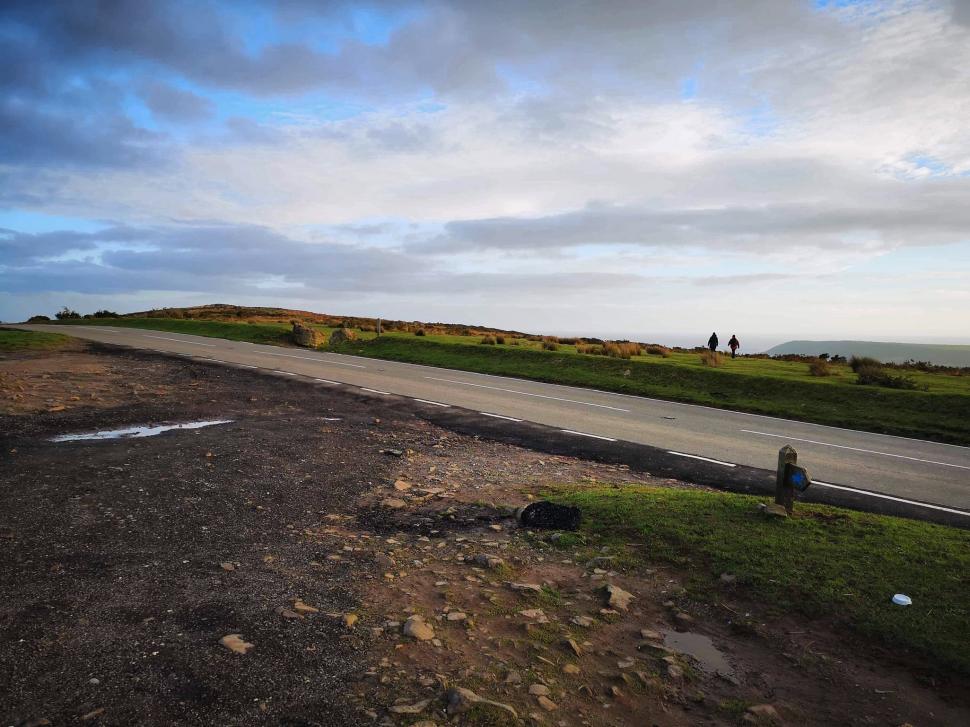 As you ride past the temptation of the King Arthur pub in Reynoldston, be wary of the false summit as you continue to climb. It goes on longer than it would have you believe, and has caught out many a cyclist in the race to the top!

It's only right to stop and take in the views of where you've come from, the Lougher estuary and Swansea, the place we're heading back towards. Don a gilet as the descent is straight and fast, but watch out for wandering wildlife as you plummet towards the ponds at the bottom. 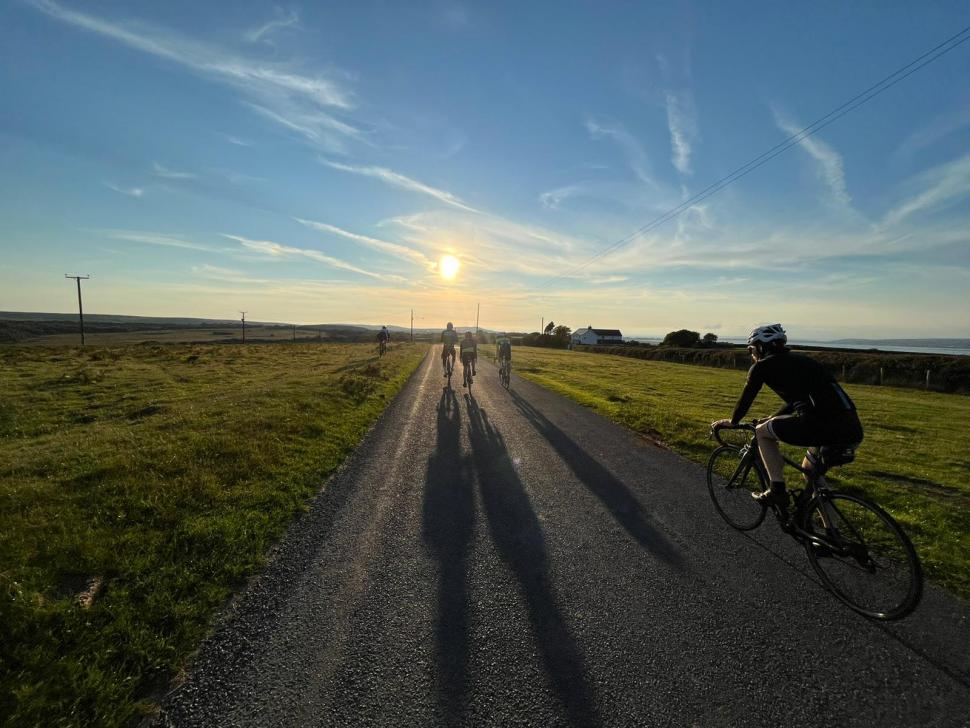 The fastest way back to Swansea at this point is to go right along middle Gower road, but I like to extend the route by going left then right to ride the quiet lanes of Welshmoor.

As with just about every road on the Gower there's some climbing to do but it's impossible to not find roads like these peaceful. A right in Three Crosses brings us back towards Swansea, but we'll take the quieter way past the airport on Fairwood Common. 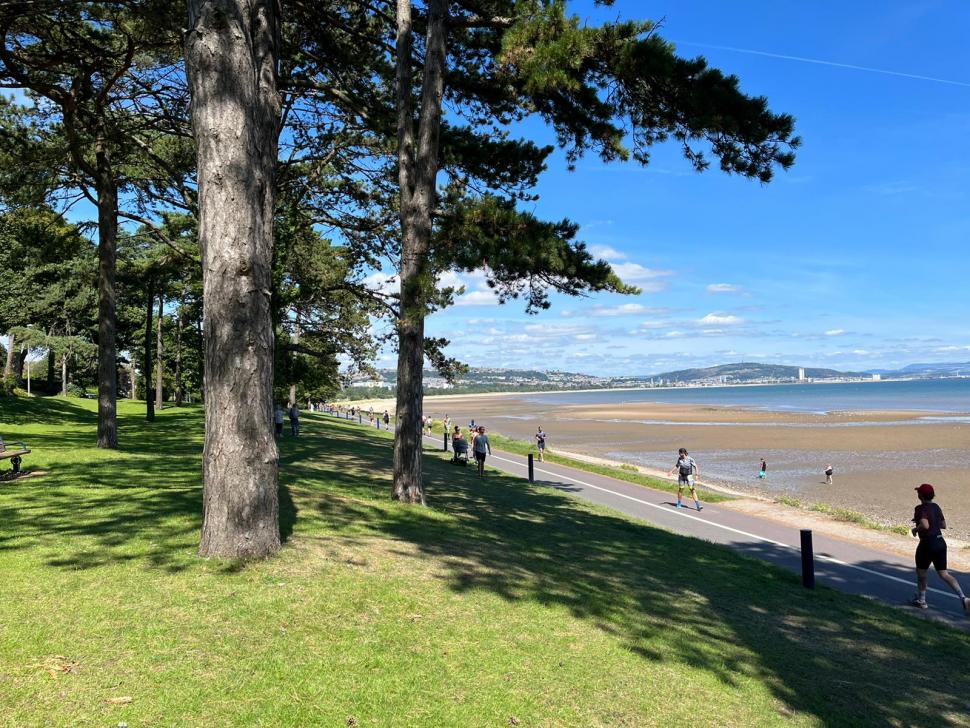 The next job is to take the Kittle dip that we did earlier in the opposite direction, and then it's a descent all the way home. By this point, you'll have well and truly earned a stop at the cafe! You'll want to cross over Oystermouth road back onto the cycle path.

When in Swansea on two-wheels my cafe of choice is Ripples. Cycling-friendly is an understatement, and in fact the owner Dennis is an avid cyclist himself.

Along with impressive views across Swansea Bay and Mumbles headland, you'll find plenty of bike racking as well as outdoor seating to make the most of the Welsh sun. When it's less nice weather there's also indoor seating without losing sight of your pride and joy outside...

It's the vast array of homemade ice cream that has put Ripples on the map; in fact, in my numerous visits I don't think I've been without a new flavour being available! Especially during summer months, you'll find everything from vanilla, to blueberry muffin or Biscoff,  and there's also a selection of sorbets and vegan options. If that wasn't enough then there's also a counter full of locally-sourced cakes, milkshakes, hot and cold drinks and more substantial food on offer.

Good views, good coffee and a friendly atmosphere. What's not to love!

South Wales not your neck of the woods, check out our Coffee & Ride collection on komoot for something closer to home