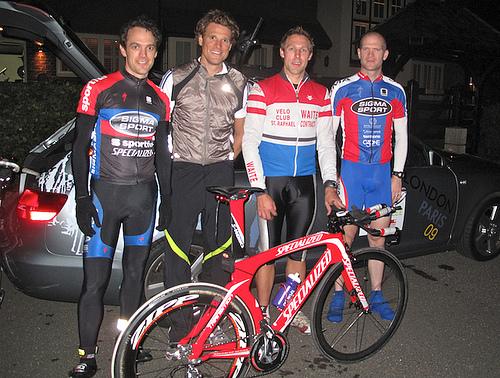 It's out of the rickshaw and back on the bike as Crackness attempts another End to End record...
by Tony Farrelly

This Saturday less than two weeks after riding a rickshaw 450 miles from Edinburgh to London with Ben Fogle, former Olympic rower James Cracknell will be saddling up again in an attempt to set a relay world record for riding from Land's End to John O'Groats.

Cracknell will join three other riders from Team Sigma Sports in attempting to do the distance in as close to 40 hours as possible ( you can follow their progress live at Map My Tracks). The idea is not only to set a record but to establish a challenging benchmark for other riders to aim at during next year's HotChillee E2E Relay Challenge. Cracknell and his three companions will be sponsored jointly by marketing and events company Hot Chillee and Sigma Sports.

Although riding the End to End as a cycling relay is not new, plenty of teams have attempted it before, including a team of female triathletes who completed it to raise money for the Dave Aitchison Sportaid Fund this summer finding any records of the times set is surprisingly difficult. Not as difficult as the ride itself though a fact that won't be lost on Cracknell who earlier this year suffered a rare failure in his attempt to break the End to End tandem record with Olympic cycling gold medallist (and former rower) Rebecca Romero. The bid failed when Romero had to stop for fear of aggravating a knee injury.

Speaking about his latest challenge Cracknell said: "Cycling has become a huge part of my sporting life and setting a new world record from Land's End to John O'Groats has been a goal of mine for a while."

The 37-year-old double Olympic rowing gold medallist said "I've rowed across the Atlantic and skied to the South Pole but I know that cycling from one end of Britain to the other at world record pace will be my toughest challenge yet."

Cracknell, who will lead next summer's Deloitte Ride Across Britain, added: "The opportunity to cycle the length of our beautiful country is something I relish. The HotChillee cyclists are determined to do something special and our record attempt will help me prepare for the Ride Across Britain."

The Road Record Association's official End to End cycling record is held by Gethin Butler who did it in a time of 44 hours four minutes and 22 seconds. However, the fastest time set on a bicycle is actually the 41 hours, 4 minutes and 22 seconds set by Andy Wilkinson in a Windcheetah recumbent… it all depends on your definition of a bicycle.

Cracknell's team mates for this weekend's record attempt are: Jerone Walters, Steve Golla and Phill Sykes. Walters and Golla both already ride for Sigma Sport and Sykes will be riding for the team in 2010 – he placed 4th in this year's National 50 Time Trial and had this to say about the upcoming challenge:

"I've had a very successful season and I'm riding the HotChillee E2E to end on a high. It's something completely out of my comfort zone and I'm excited to see if I can rise to the challenge. I'm also hoping the work ethic of an Olympic champion will rub off on me for next season."