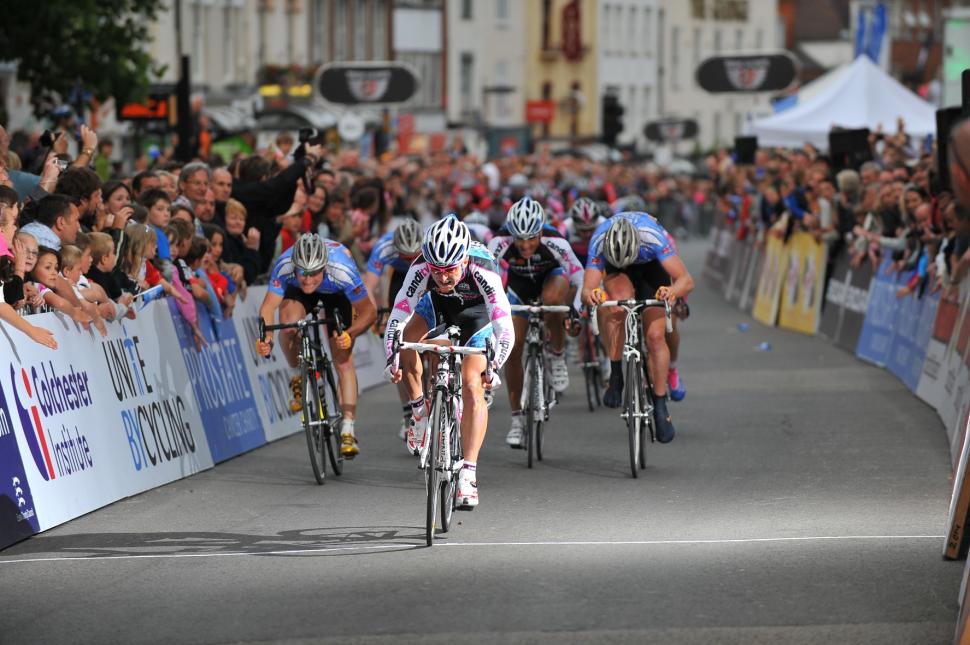 Gloucestershire town gets go-ahead for race
by Simon_MacMichael

The Gloucestershire town of Tewkesbury is gearing up to host a race in next year’s Tour Series after being given the thumbs-up from the series organisers.

The event will take place on 1 June 2010, when local schools are on half-term, and will follow a similar format to the 10 races held during this summer’s inaugural Tour Series in towns and cities across Britain including Colchester, Exeter and Milton Keynes.

This year’s ten-race Tour Series has been described as a “resounding success” by organisers Sweetspot and Cyclevox and teams and venues alike, drawing aggregate crowds of more than 100,000 fans. Halfords Bikehut won the series, edging out CandiTV-Marshalls Pasta and Rapha Condor after some thrilling racing throughout the summer, with ITV4’s coverage of the races also attracting sizeable audiences.

In order to secure the race, Tewkesbury had to come up with funding of £60,000 and that has been achieved through the support of Tewksbury Borough Council, which has given £20,000, the
Count Me In! Healthy Towns’ initiative, which pledged £35,000, with Gloucestershire County Council chipping in £4,000 and Tewkesbury Town Council £1,000.

Tewkesbury Borough Council’s Portfolio Holder for Economic Development and Promotion, Councillor Phil Taylor said: “This is a great chance for us to showcase everything the Borough has to offer on a national stage – there will be huge publicity and it will bring so many visitors to the area, which will give a boost our local economy.”

He added that as well as the Tour Series race, there would be a range of other events on offer including “events for children, opportunities for local teams to compete, family fun, opportunities to meet elite athletes, demonstrations and much, much more.”

Craig Brophy, speaking for the Tour Series organisers said: “Tewkesbury is an excellent cycling town, so as a venue for the Tour Series it couldn’t be better,” adding that “the fact that the area is one of the nine Government-backed Healthy Towns means the event will be really well placed.”