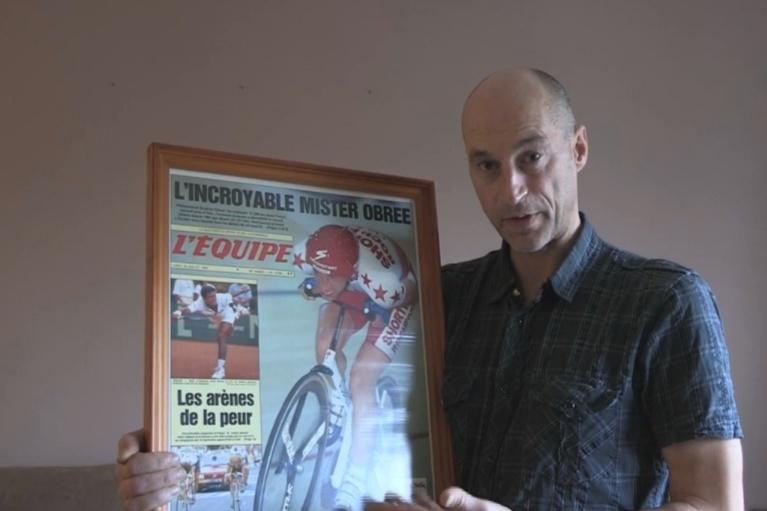 Obree was invited to the newspaper’s offices in Paris, where he was presented with the Cromalin – the original colour page proof of the newspaper, the process developed by Dupont. It’s therefore one of a kind.

The auction is taking place on Obree’s website and is open until 30 March 2014 at 12.00 noon. At the time of writing, the current highest bid is £150, and there is an unspecified reserve price.

Obree, who explains about the Cromalin in the following video, says he “will also consider delivery of the item to the successful bidder in person.”

The Hour record is back in the news this year with Fabian Cancellara planning to have a crack at it.

But Obree’s exploits 21 years ago in Vikingskipet arena in Hamar, Norway, on his homemade bike Old Faithful captured the imagination of cycling fans and the general public.

It also gave rise to an unprecedented level of competition to set the greatest distance travelled by bike in an hour, with Obree vying with Chris Boardman, Miguel Indurain, Tony Rominger and Moser himself to try and set a new benchmark. The rivalry included Obree setting a new record for the second time.

Indeed, all but Moser would hold the record between July 1993 and September 2006, with the boundaries of bike design and rider position pushed so far - a lot of that down to Obree - that the UCI made a distinction between its official Hour record and what it terms the “Best Human Effort.”

Merckx was reinstated as holder of the UCI Hour record, and Boardman would succeed him in 2000. Those previous records from Moser’s one in 1984 through were reclassified as “Best Human Effort.”