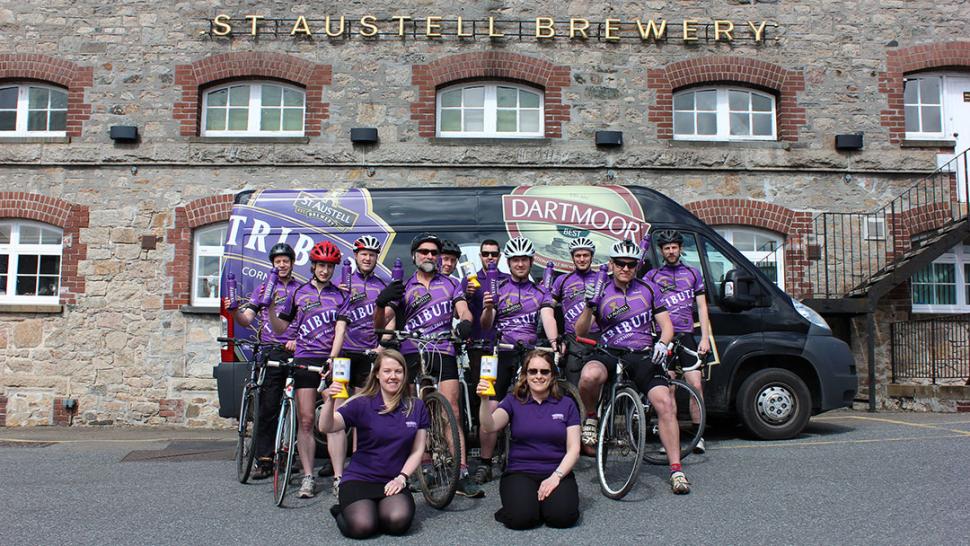 Cyclists from a brewery in Cornwall, including one-time round-the-world cycling record holder, Vin Cox, will set out on a 70-pub pub crawl charity cycle in the South West on Saturday May 24.

As epically dangerous as it sounds, the riders from the St Austell Brewery in Cornwall will not, in fact, be drinking at every one of the 70 pubs they pass on their route.

If the riders were playing by traditional pub-crawl rules, and each rider drank a pint of the brewery's flagship Tribute ale (4.2% abv) in each pub, there would be 168 units of alcohol running through the veins of every rider.

Not to worry though, if the riders are able to average 22.5 km/h in their inebriated states they should be able to burn off the 14,280 calories consumed, even allowing them the luxury of a celebratory pint upon their return.

Rather than dangerous drinking games, the charity riders will instead cover 280 miles of the South West’s roads from Bristol to Land’s End, sober and in the name of the St Austell Brewery Charitable Trust which supports charities, individuals and good causes in the South West.

The three-day ride has been dubbed the Ale Trail Cycle Challenge, in homage to the brewery’s 150 pub challenge, and will set out on Saturday from the most easterly St Austell pub: The Albion in Clifton, Bristol.

Current analyst programmer at the brewery, Vin Cox, who set the round-the-world cycling record in 2009 after cycling 18,172 miles in 163 days 6 hours and 58 minutes, will join brewery staff on the trip which has been split into three days of riding.

The first leg, from Bristol to Exeter will get underway on May 24, and will cover 100 miles of South West road: as will the second day from Exeter to the St Austell Brewery in Cornwall.

The final leg of the journey will be a sympathetic 80 miles, and takes the riders from their brewery down to Sennen Cove, just north of Land’s End.

“This is an ambitious challenge for the team and won’t be an easy ride at all," ride organiser and brewery employee Charlie Mason told the St Austell Brewery website.

"We hope the willingness of these cyclists to undertake such a long bike ride will encourage a lot of people to dig deep and sponsor them – and help generate vital funds for the St Austell Brewery Charitable Trust to continue its great work supporting South West charities.”

Some of the funds raised for the trust will go to the national charity devoted to inspiring and helping people to cycle and keep cycling, CTC.

CTC was founded in 1878 and has links to a number of St Austell Brewery pubs in the South West, as many became early regional headquarters for the organisation.

You too can contribute to the cyclists’ charitable endeavour by donating via their Charity Choice page.